Accessibility links
After 80 Years, The Barbershop Harmony Society Will Allow Women To Join The Society for The Preservation and Encouragement of Barber Shop Quartet Singing in America first convened in the spring 1938, in an all-white social club in Tulsa, Oklahoma. It's come a long way.

After 80 Years, The Barbershop Harmony Society Will Allow Women To Join

After 80 Years, The Barbershop Harmony Society Will Allow Women To Join 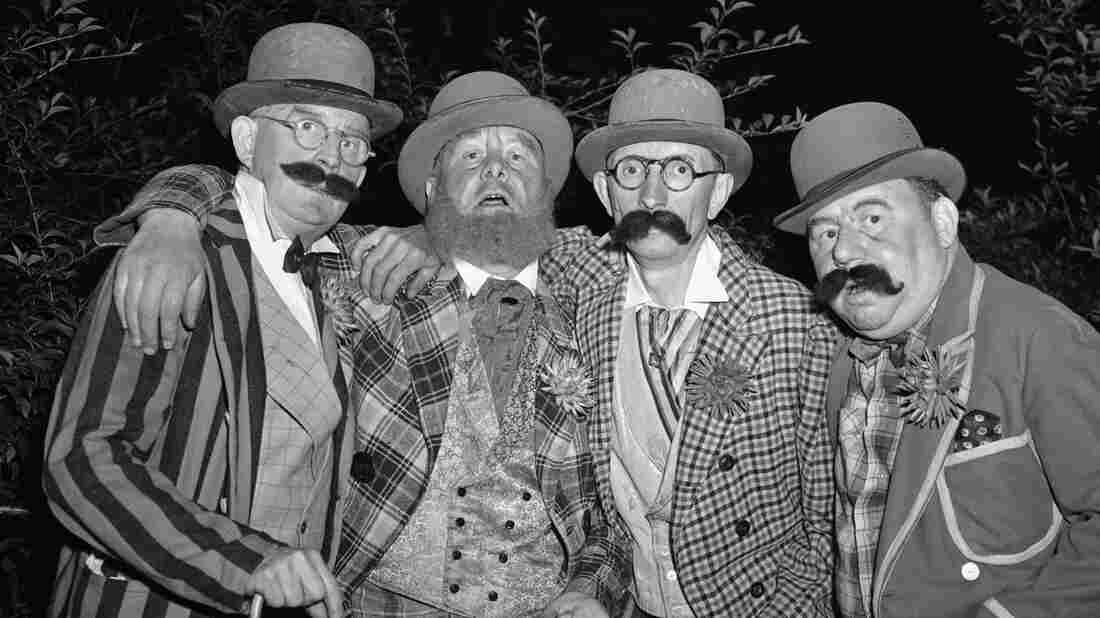 Members of the Knickerbocker Four, photographed during a Barbershop Quartet Contest on June 20, 1946 in Central Park. Bettmann Archive hide caption 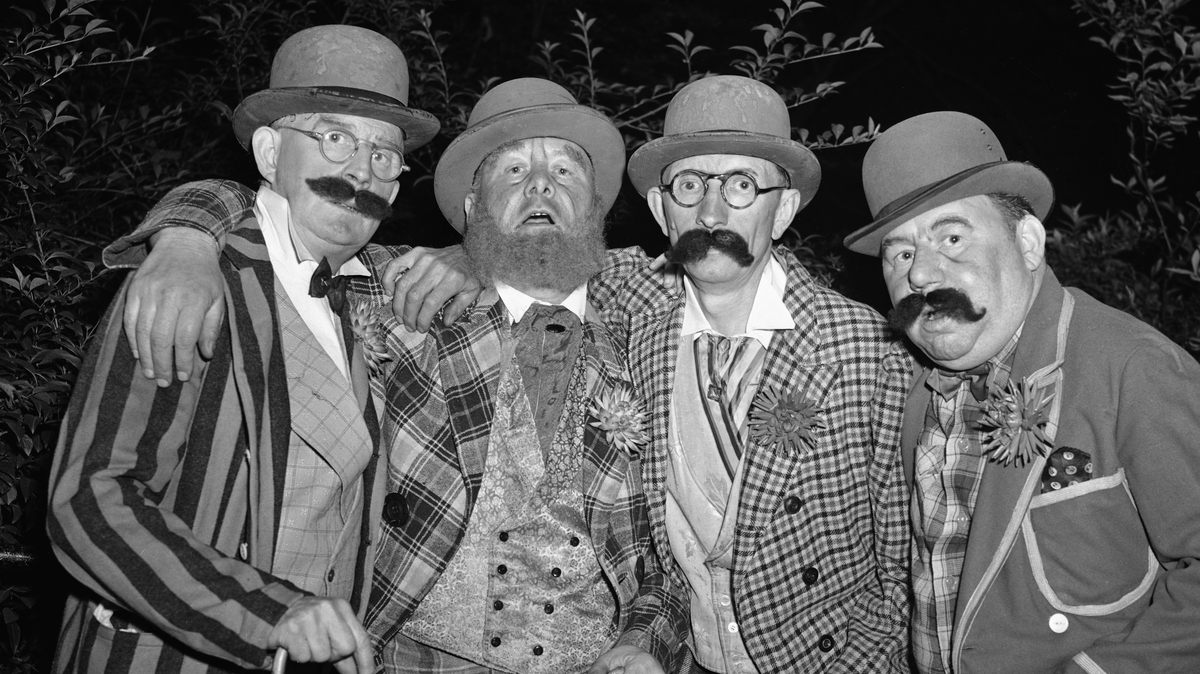 Members of the Knickerbocker Four, photographed during a Barbershop Quartet Contest on June 20, 1946 in Central Park.

If you're at all familiar with the modern perception of barbershop singing, you might have guessed that one of its leading organizations, the Barbershop Harmony Society, was an all-male — and all-white — organization at the time of its founding in 1938. The organization opened to people of color in 1963, as the country was living within the crucible of the civil rights movement. For 80 years, though, it remained closed to women. Until yesterday.

"Beginning today," the BHS' statement, released June 19, reads, "we welcome women to join the Barbershop Harmony Society as members." Its membership chapters can, however, "choose to stay exactly the same as you are today" — as a male-only club — or "choose to add a mixed chorus, or a new, distinct women's chorus. New chapters might form — male, female, or mixed. This is about adding, not subtracting. More people, sharing more harmony, and more joy, in more ways." Later, its announcement makes it plain that chapters are not required to begin accepting female members. And, further suggesting a controversial core to the announcement, the BHS notes it believes "preserving the experience of men singing together and welcoming women as members of the barbershop harmony society are compatible ideas."

The announcement is the result of a three-year soul search undertaken by the BHS, during which it conducted membership surveys, studies and research on its aims, which yielded a broad platform: "Everyone In Harmony."

The BHS' policy shift and the statement accompanying it is notable both for its timing and its tone — "cautious" might be the word. It's a tiptoe that can be traced with ease to the cultural origins in which barbershop became popular. The Barbershop Harmony Society's first meeting took place in the spring of 1938 at the Tulsa Club, an all-white, membership-only organization of the time, established to provide southern oil men a place to socialize in private. After a two-decade wane in popularity that began in the '20s, the establishment of the BHS kicked off a revival of the barbershop sound through the '40s and helped to define a (not-incorrect) perception of the genre that has lasted into the present day.

"Gentlemen," the organization's initial, industrialist-tinged call to song began, "In this age of dictators and government control of everything, about the only privilege guaranteed by the Bill of Rights not in some way supervised and directed, is the art of barber shop [sic] quartet singing."

In that note, from 1938, a plan to head off interlopers and to protect delicate sensibilities was well in place: "We will have a private room and so will not be embarrassed by the curiosity of the vulgar public," it read, before concluding, "You may bring a fellow singer if you desire." With that, the bedrock for what was then called the Society for the Preservation and Encouragement of Barber Shop Quartet Singing in America was established.

That plea for harmony was written 80 years ago by Rupert Hall, "Royal Keeper of the Minor Keys," and Owen Clifton Cash, "Third Assistant Temporary Vice Chairman." Those self-applied titles were an apparent tongue-in-cheek dig at the honorifics going around at the time thanks to the New Deal, as was its ludicrous acronym, SPEBSQSA.

But, as the BHS enters the 21st century with its new, admittedly spongy, policy of inclusion, it has stood side-by-side for nearly its whole history with an organization that does much the same thing, but across the formerly impassable line of gender: Sweet Adelines International, a women's barbershop organization also founded in Tulsa, still under the shadow of World War II at the time.

"In 1945, there were several wives of barbershoppers who wanted to do what their husbands were doing. The BHS were all men and they wanted to keep it that way," Patty Cobb-Baker, president of Sweet Adelines, tells NPR. The men wanted to "keep the wives at home and doing whatever they were doing back in 1945. But a woman by the name of Edna Mae Anderson said 'Well, we can, and we want to.' "

Cobb-Baker says Sweet Adelines became a way to foster leadership within (white) female communities — the harmonies gave its members "the opportunity to commune with other women," Cobb-Baker says, "to become leaders. Kind of like the Girl Scouts, we like to grow leadership skills in women that they never knew they had."

Of the potential competition that BHS' new policy could present to her organization, Cobb-Baker says she'd "be lying" if the thought didn't cross her mind. "We have a very strong strategic plan ourselves, our own vision," she says. "We will always be happy when there are more opportunities for people to sing in the world."

Barbershop's origins as a genre and a term are more diverse than the image it has accrued over the 80 years since the BHS' founding, however — wildly so, according to Frédéric Döhl, a musicologist and author of the 2014 paper From Harmonic Style to Genre: The Early History of the Uniquely American Musical Term Barbershop. Döhl writes that, at least when it comes to use of the word barbershop to describe the musical style, that "no reliable attributions can be made about its origins with regard to race, gender, region, social environment, amateur or professional, impromptu or composed-arranged, highbrow or lowbrow etc."

Despite that, the form has cultivated — on purpose at first, later perhaps by reflex — a palpable and gentry-ish defensive streak among its practitioners. As one singer told NPR in 2008, commenting on the introduction of more modern pop songs into the form: "I happen to be one of many that has difficulty in telling you what barbershop is, but I can sure tell you when it isn't."

"We like to think of them as 'preservationists.' There is certainly a range of devotion to what is believed to be the 'pure' barbershop style," Brian Lynch, a public relations executive with the BHS, tells NPR. "In my experience, 'barbershop' is whatever it was the day you joined."

Of its checkered origins, Lynch is forthright. Asked of its past as an all-white, all-male organization, he says it "is a piece of our history that we're working hard to acknowledge and understand and move forward from. It's not something we're proud of today." He adds that the BHS has established an endowment fund for persons of color, "all parts of the evolution of any organization to reset and understand what your purpose is."

"Our motto," Cobb-Baker says, "is 'harmonize the world.' " That's a tall order — always, perhaps more so now than ever. But it's never too late to try.