Accessibility links
ICE Carries Out Its Largest Immigration Raid In Recent History, Arresting 146 More than 100 federal agents with Immigration and Customs Enforcement raided a major meat supplier in Salem, Ohio, on Tuesday. It was ICE's second massive operation in Ohio in as many weeks. 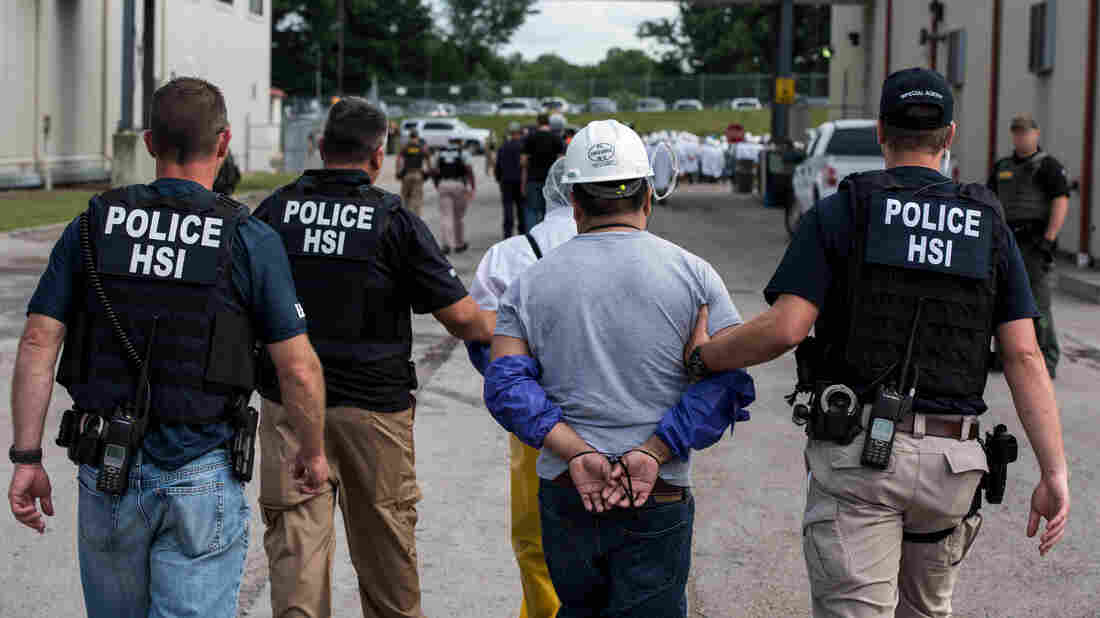 Special agents with Homeland Security Investigations, the investigative arm of U.S. Immigration and Customs Enforcement, lead a man away from Fresh Mark in Salem, Ohio, on Tuesday. The mass arrests were the result of the second such large-scale raid this month.

Dozens of federal agents descended on a major meat supplier in northeast Ohio on Tuesday, arresting 146 Fresh Mark employees in what the agency calls its largest workplace raid in recent history — and its second massive raid in the state this month.

U.S. Immigration and Customs Enforcement said that its investigative arm, Homeland Security Investigations, obtained a warrant to search the meat processing plant in Salem, Ohio, as part of a yearlong probe of Fresh Mark's hiring practices and whether it may have knowingly hired undocumented immigrants. Agents also searched three other company facilities without making more arrests.

Although ICE notes that agents released several suspects for "humanitarian concerns, such as health or family considerations," the agency says most of the undocumented workers "will be detained in facilities in Michigan and Ohio while awaiting removal proceedings."

An ICE spokesman could not immediately confirm to NPR how many people remained in custody. Fresh Mark, when asked for comment, issued a statement directing journalists to the Department of Homeland Security.

Later on Tuesday, after darkness had settled over Ohio, the Cleveland Plain Dealer filmed dozens of detainees entering the local ICE office for processing.

"Unlawful employment is one of the key magnets drawing illegal aliens across our borders," Steve Francis, HSI special agent in charge for Michigan and Ohio, said in a statement. "Businesses who knowingly harbor and hire illegal aliens as a business model must be held accountable for their actions."

The operation, as large as it was, marks just the latest in a series of high-profile raids carried out by federal authorities. About 100 people were arrested at a meat packing plant in Tennessee in April — while just two weeks ago in Ohio, ICE officials rounded up 114 people in a massive immigration raid at a landscaping company's locations two hours northwest of Salem.

As NPR's Vanessa Romo explained at the time, the operation earlier this month drew some condemnations: "ICE officials had come under fire by immigrant advocacy groups who claimed dozens of children had been left stranded at schools, day cares and with babysitters as their parents were carted off to detention centers elsewhere in the state and in Michigan."

Trump Says He Will Sign Order To End Family Separations

More than 1,000 miles south of Ohio, other separations of immigrant families have drawn considerably more attention and ire.

The Trump administration's "zero-tolerance" immigration policy has resulted in more than 2,300 children being separated from their parents since early May. The practice has been described by medical professionals and international human rights officials variously as "unconscionable," traumatizing and outright "government-sanctioned child abuse."

In the face of this widespread condemnation, Trump appeared to reverse course Wednesday. Despite administration officials' frequent insistence that only Congress could resolve the situation, the president announced from the White House that he will sign an executive order seeking to "keep families together."

However, Trump did not talk about how families would be kept together or how detentions would be handled going forward.

As for the Fresh Mark workers detained in Ohio on Tuesday, Kabir Bhatia of member station WKSU reports that immigration attorneys are gathering at a place of worship near the Salem plant. There, at St. Paul's Church, detainees' family members are seeking answers on what they can do next.

"It's the terror of: 'What's happening to my family? I can't contact them,' " Sister Rene Weeks, director of the church's Hispanic ministry, told Bhatia on Wednesday. She works with about 60 families, and she estimates about three-quarters of them were directly affected by the raid.

"A few people managed to send some text messages, but for the most part, people couldn't talk to anybody," she said. "They were terrorized."