Accessibility links
Former Washington, D.C., Archbishop Removed From Ministry Over Abuse Allegation Cardinal Theodore McCarrick denies having sexually abused a teenager when he was a priest in New York decades ago but says he accepts the Holy See's decision that he refrain from any public ministry. 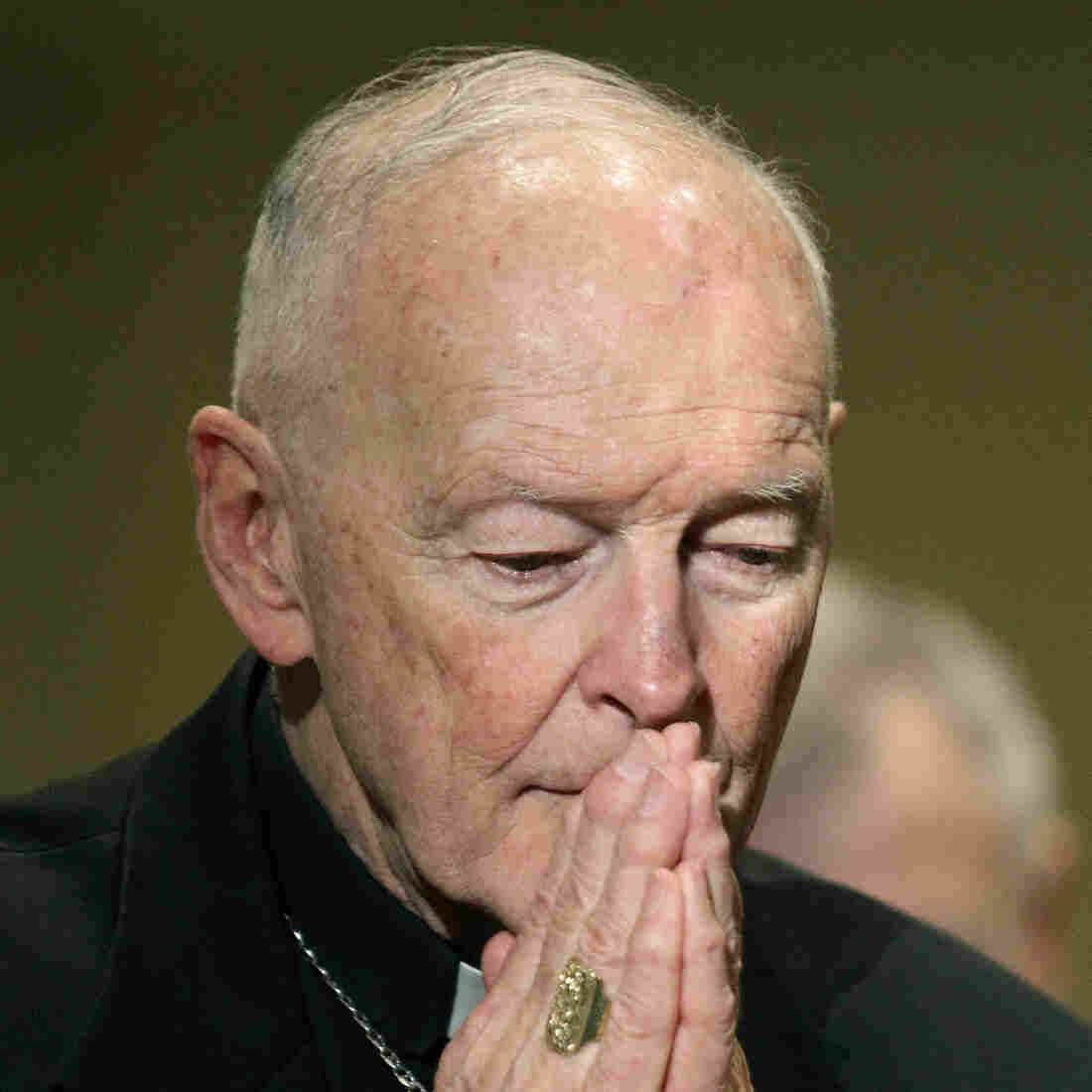 Cardinal Theodore McCarrick prays during the United States Conference of Catholic Bishops' annual fall assembly in 2011 in Baltimore. McCarrick was ordered by the Holy See to step down from public ministry as a result of an allegation of sexual abuse. Patrick Semansky/AP hide caption 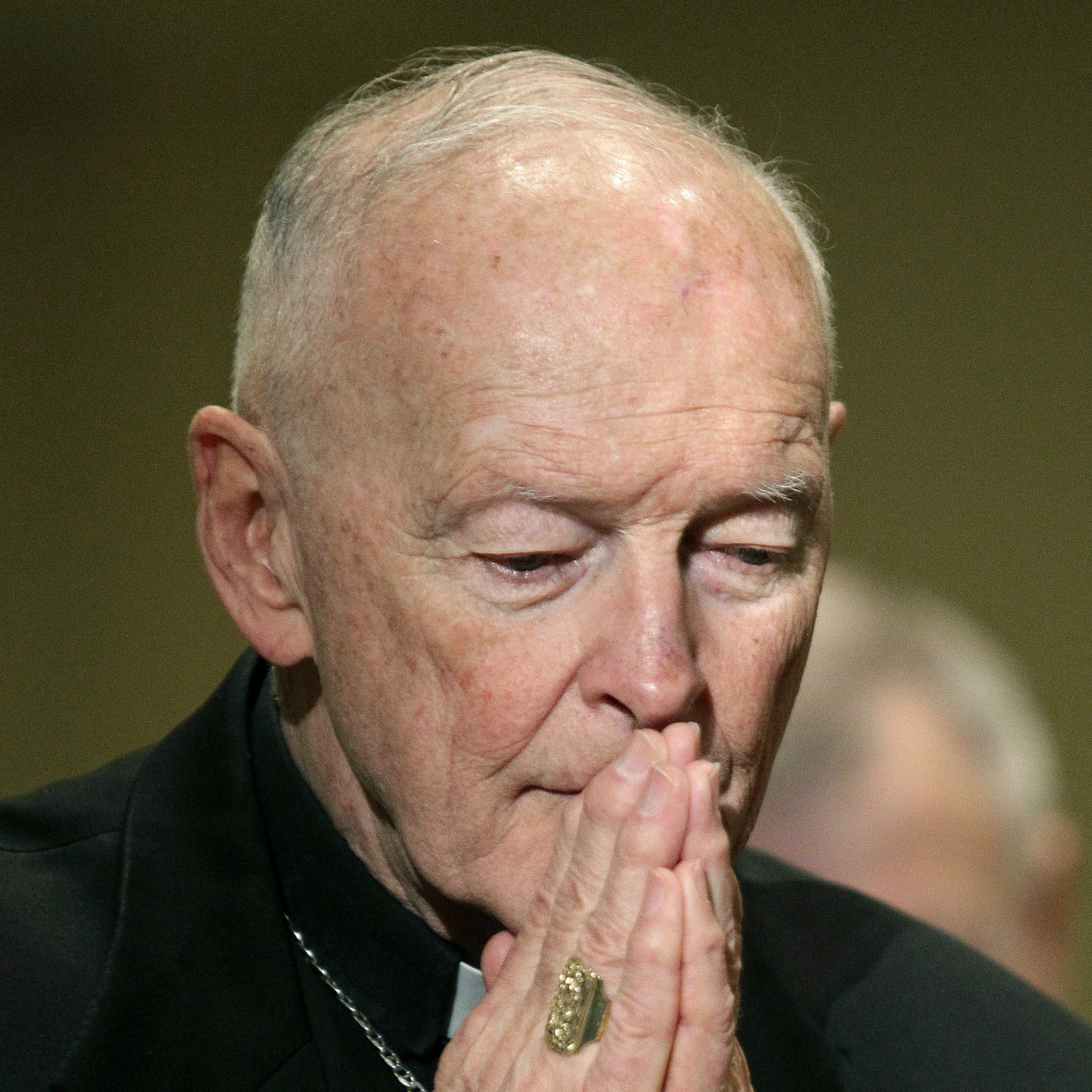 Cardinal Theodore McCarrick prays during the United States Conference of Catholic Bishops' annual fall assembly in 2011 in Baltimore. McCarrick was ordered by the Holy See to step down from public ministry as a result of an allegation of sexual abuse.

Cardinal Theodore McCarrick, the former archbishop of Washington, D.C., has been removed from all public ministry following an allegation that he sexually abused a teenager when he was a priest in New York nearly 50 years ago.

McCarrick, 87, said in a statement Wednesday that the archbishop of New York, Cardinal Timothy Dolan, had advised him of the allegation several months ago. He said he is innocent and that he was "shocked by the report" but fully cooperated during an investigation ordered by the Holy See.

"My sadness was deepened when I was informed that the allegations had been determined credible and substantiated," McCarrick said.

Dolan said in a statement that the allegation had been turned over to law enforcement and "was then thoroughly investigated by an independent forensic agency."

Those findings were given to the Archdiocesan Review Board, whose members include parents, psychologists and jurists who "found the allegations credible and substantiated," Dolan said. Then, "at the direction of Pope Francis," McCarrick was instructed "that he is no longer to exercise publicly his priestly ministry."

Dolan said it "was the first such report of a violation of the Charter for the Protection of Children and Young People ever made against McCarrick of which the archdiocese was aware."

But other allegations of sexual misconduct have been made against McCarrick.

After he worked as a priest in New York, McCarrick served as the bishop of Metuchen, N.J., from 1982 to 1986, then rose to become archbishop of Newark, a position he held for almost 15 years.

On Wednesday, Metuchen Bishop James Checchio and Newark's archbishop, Cardinal Joseph W. Tobin, released statements saying there were no reports that McCarrick had abused a minor during his time in those places.

However, the statements said, the Metuchen Diocese and the Archdiocese of Newark had received a total of three allegations that McCarrrick engaged in sexual misconduct with adults decades ago.

Two of those allegations resulted in settlements.

"The abuse of anyone who is vulnerable is both shameful and horrific," Checchio said. "The abuse of a minor by a priest — as is being reported in this case from New York — is an abomination and sickens and saddens us all."

The allegation that McCarrick had abused a teen decades ago was lodged in 2017, New York Archdiocese spokesman Joseph Zwilling told NPR. He said it arose from the work of the Independent Reconciliation and Compensation Program, which seeks to compensate victims of abuse by priests or deacons in the New York Archdiocese.

McCarrick served as Washington's archbishop from 2001 to 2006.

He sat down with NPR's Renee Montagne ahead of his retirement and spoke about finding virtue in the middle, an especially important responsibility in the often polarized world of Washington.

Asked about the middle way when it came to the issue of priests and sexual abuse, McCarrick responded:

"I guess there, that the middle way would be that man cannot exercise ministry, because he's dangerous.

"No. 2, we really have to make sure that we are organizing the most perfect child protection program, so that this will never happen again. The moderate position, I guess, would be that you don't take a man out and kill him."

In his statement Wednesday, McCarrick said of the abuse allegation, "I realize this painful development will shock my many friends, family members, and people I have been honored to serve in my sixty-years as a priest."

And while he said he had "absolutely no recollection of this reported abuse," he apologized for "the pain the person who brought the charges has gone through, as well as for the scandal such charges cause our people."

According to the The Washington Post, McCarrick is unlikely to face charges because New York state law prevents victims of child sexual abuse from pursuing charges after they turn 23.