Accessibility links
Trump's Executive Order On Family Separation: What It Does And Doesn't Do The president ended a policy that sent children to government-run facilities away from their parents, but critics say he created new problems, and kids already held may be there indefinitely. 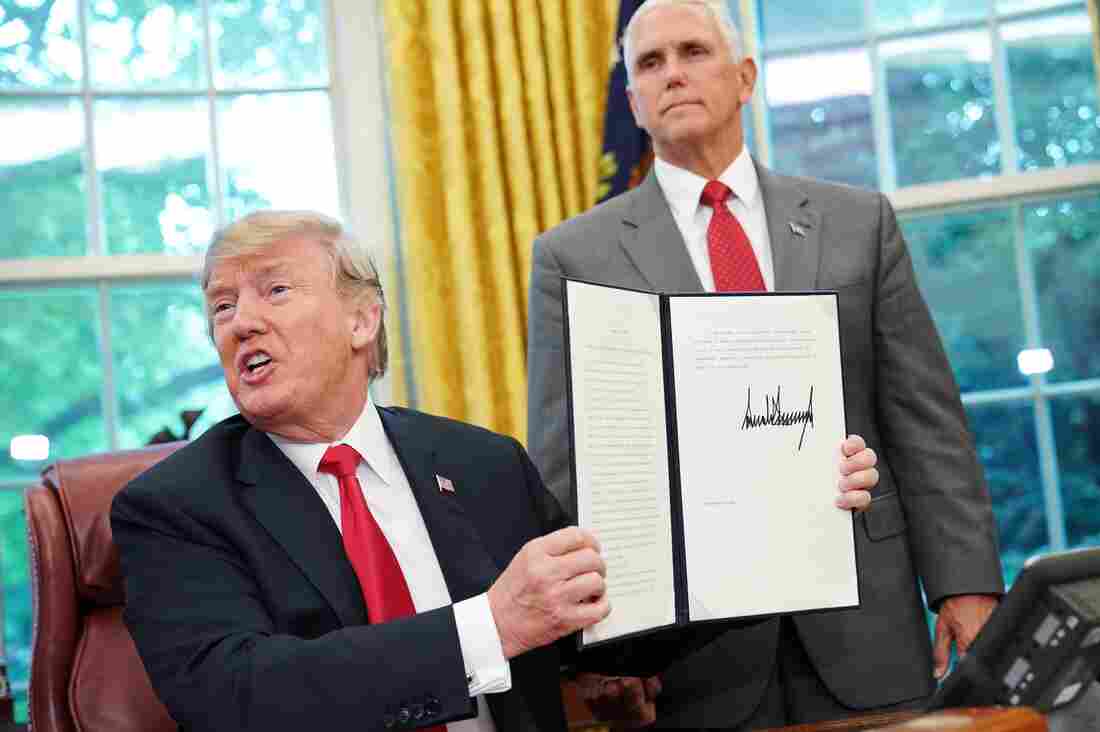 Watched by Vice President Pence, President Trump on Wednesday shows an executive order on immigration aimed at putting an end to the controversial separation of migrant families at the border. Mandel Ngan/AFP/Getty Images hide caption 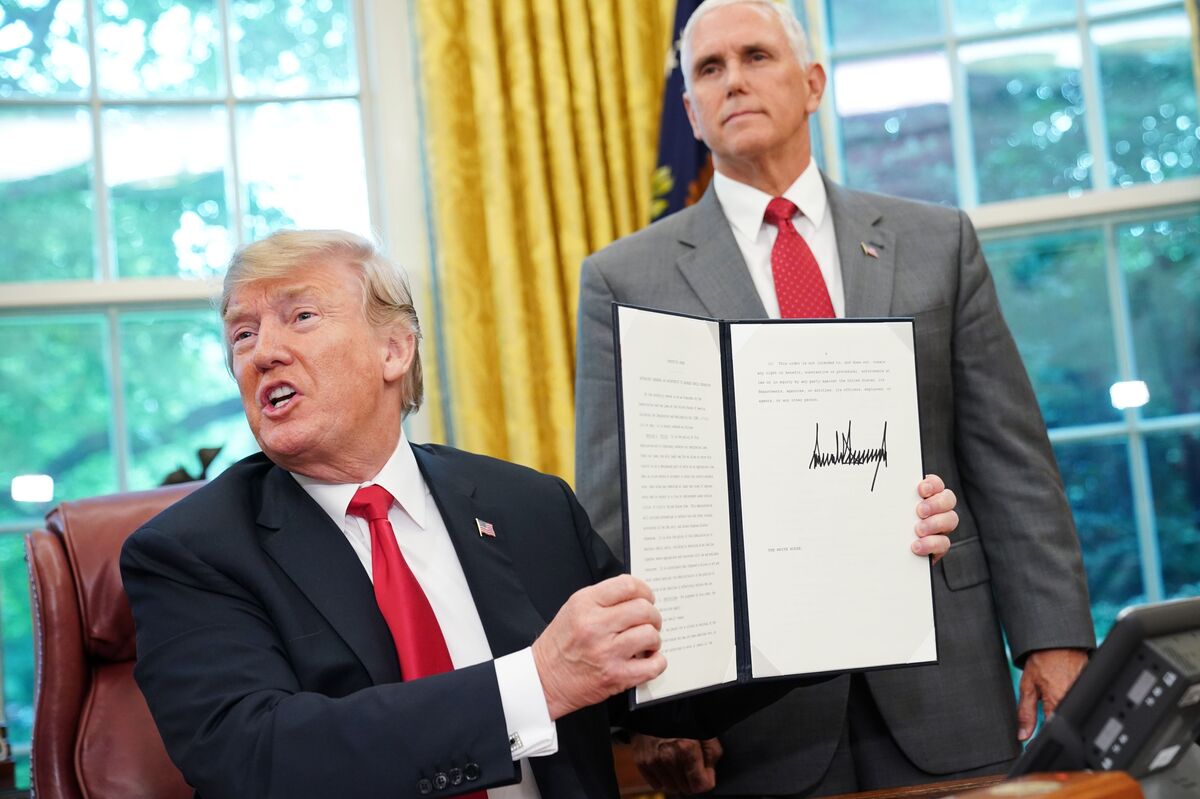 Watched by Vice President Pence, President Trump on Wednesday shows an executive order on immigration aimed at putting an end to the controversial separation of migrant families at the border.

President Trump signed an executive order on Wednesday ending his administration's policy of separating migrant children from their parents who were detained as they attempted to enter the U.S. illegally.

The action came after a firestorm of protest from administration opponents and allies, reacting to pictures and sounds of young children traumatized by their separation from their parents at the hands of U.S. authorities.

"So we're going to have strong — very strong borders, but we're going to keep the families together. I didn't like the sight or the feeling of families being separated," said Trump.

He is, in effect, ordering family separation to be replaced with the detention of whole families together, even after previously arguing that "you can't do it by executive order."

What does the executive order say?

What court orders is he talking about?

The administration has consistently said it was forced to separate families because of the conclusion of a court case known as "the Flores Settlement." That settlement, reached in 1997, required the government to limit the time it keeps unaccompanied minors in detention and to keep them in the least restrictive setting possible. The settlement was later modified to say that children should not be held longer than 20 days.

Trump's executive order directs the attorney general to promptly file a request with U.S. District Judge Dolly Gee in the Central District of California to modify the Flores Settlement and allow detained migrant families to be held together "throughout the pendency of criminal proceedings ... or other immigration proceedings."

What else did Trump order?

The president directed Homeland Security Secretary Kirstjen Nielsen to maintain custody of detained families during criminal proceedings and as their asylum claims are adjudicated. Also, Secretary of Defense Jim Mattis and the heads of other agencies are ordered to find or construct facilities to house the detained families. Finally, Attorney General Jeff Sessions is directed to prioritize the adjudication of cases involving detained families.

What does the executive order mean for House Republican legislation?

After visiting Capitol Hill on Tuesday night to rally a broad immigration bill, Trump said Wednesday that he still hopes that Congress will act.

"We will be going through Congress. We're working on a much more comprehensive bill," Trump said before signing the order. But as The Washington Post reports, few people are predicting that either House measure — either a conservative version or a more moderate one — will pass.

So what happens to the children who have been separated from their parents?

It is not immediately clear whether, or when, detained children will be reunited with their parents.

"It is still very early and we are awaiting further guidance on the matter," said Brian Marriott, senior director of communications at the Administration for Children and Families, a division of Health and Human Services.

"Our focus is on continuing to provide quality services and care to the minors in HHS/[Office of Refugee Resettlement] funded facilities and reunifying minors with a relative or appropriate sponsor as we have done since HHS inherited the program. Reunification is always the ultimate goal of those entrusted with the care of [unaccompanied children], and the administration is working towards that for those [unaccompanied children] currently in HHS custody."

Reyna Torres Mendivil, Mexico's consul general in San Antonio, told NPR's Audie Cornish that the process would be hampered by the U.S. separation process, which keeps parents in federal custody while moving children into facilities controlled by the Department of Health and Human Services.

"The U.S. authorities create different files for the children than for the parents, and it's very difficult to follow up on those cases," Torres said.

What's the reaction to the executive order?

Immigrant advocates say the president's executive order is no solution and will only create more trauma for children because they will be placed in facilities that are unfit for minors.

"First, there are more than 2,000 children already separated from their parents; the executive order does nothing to address that nightmare," said Michelle Brané, director of the Migrant Rights and Justice Program at the Women's Refugee Commission. "Second, this executive order effectively creates family prisons, which we already know are a threat to the well-being of children."

"The president doesn't get any Brownie points for moving from a policy of locking up kids and families separately to a policy of locking them up together," said Karen Tumlin, director of legal strategy at the National Immigration Law Center. "Let's be clear: Trump is making a crisis of his own creation worse."

Some on the right are equally dismayed.

"According to any fair reading of the order, it represents a massive capitulation by the administration," wrote National Review senior writer David French.

But Mark Krikorian, executive director of the D.C.-based Center for Immigration Studies, which supports limited immigration, supported the president.

"Getting rid of the Flores Settlement is the quickest way to solve the problem," Krikorian told The Washington Post. "The government has been faced with the choice of either splitting the family by detaining the parent and releasing the kid, or just letting the parent go too."