Accessibility links
'Tell The Machine' Is A Lucid Dream Of Sci-Fi Perfection Katie Williams' debut novel follows a woman who works for a company that can tell you infallibly how to become happy — and a drifting group of characters who aren't really looking for happiness.

'Tell The Machine' Is A Lucid Dream Of Sci-Fi Perfection

'Tell The Machine' Is A Lucid Dream Of Sci-Fi Perfection 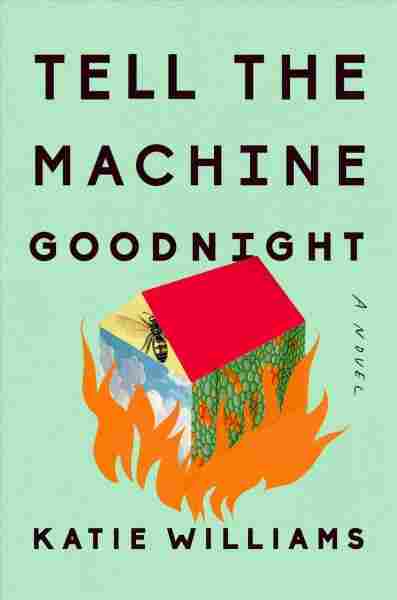 Look, I know how these things are supposed to work.

You find yourself here, looking for a recommendation on a book. A specific book, or maybe a new book. Something you've never heard of. We do a little dance, you and me. I tell you that the book was good or bad. I tell you why. I pull a salient quote and, to amuse myself, try to fit in a joke or two. Find a meaningful connection in the text. Craft a nicely-turned phrase. If I do my job well, you'll leave here with a sense of the book in question, a feeling for whether you'll like it or not. A book is a commitment. It is time taken out of your life, dedicated to vicariously living inside someone else's. On a good day, with a good book, it's a fair transaction. On a bad one, it's robbery. X minutes/hours/days of your life you won't ever get back.

Now, here's the problem. Every now and then, I come across a book that doesn't fit the formula. That resists (for whatever reason) the easy slide into encapsulation. Sometimes it's because it's so complex, other times it's the form or execution that defy conventional judgement. And once or twice a season or a year it's because the book itself just ... refuses.

Nutshell: I loved Katie Williams's debut novel Tell the Machine Goodnight. So much that I read it twice. The first time was straight through — not driven by plot or thrumming action, but in a languid drift across 280-some pages, a feeling like being drunk on a raft in calm water. The second time I dipped in and out, 10 or 20 pages at a swallow. I might read it again when we're done here. Haven't decided yet.

It is a book about happiness the way the sky is a movie about blueness. I'd pull a quote for you to show the deft, sad, lovely way Williams has with language, but none of them would make sense divorced from their neighbors. So here's this:

Val had left not just Elliot but her entire life. Pearl almost admired her. The woman had quit her job, cut ties with friends, and moved to Seattle, as if her marriage were an entire city that had been sacked. And here Pearl stood among the bombed-out buildings and smoking chunks of mortar.

It's beautiful, that image. That combination of things juxtaposed within the frame of a few short, sharp sentences. Better still once you know Val and know Pearl and know Elliot. The burning is apt; Pearl as the sole, standing survivor in the ruin equally so.

Tell The Machine is mostly about Pearl, employee at a company called Apricity (a word that means the feeling of the sun warming your skin in winter) which manufactures, services and operates a machine that can tell you what you need to do to be happy. All it requires is a swab from the inside of your cheek and voila! A happiness checklist. Learn a foreign language. Get a dog. Cut off the tip of your index finger. The machine is never wrong. It works 100% of the time.

Pearl has a son named Rhett who is suffering from life-threatening anorexia. She has an ex-husband (Elliot) who is an artist and Elliot has a new wife for a while (spoiler alert) called Val. Pearl has a boss named Carter and a kinda-friend, Calla, who is the most famous movie star in the world. Rhett has friends called all sorts of things. Val had a mother once. And all of them ...

I almost said "... are looking for happiness" but that would've been a lie. Because they're really not, and if they were that would be trite and Tell The Machine isn't that. Most of Williams's characters, it seems, are searching hard after unhappiness most of the time. Or are drifting along, unaware that happiness is a possibility. Or have it (maybe, sometimes) accidentally thrust on them, then run away. Or screw it all up somehow just by, you know, living.

It is sci-fi in its most perfect expression — no robots, no explosions, no car chases. Reading it is like having a lucid dream of six years from next week.

The novel is almost a series of interlinked short stories. Really, it's just a roughly chronological progression of chapters which each deal with a different character within Pearl's orbit. Taken separately, they are little short ditties about life in a future where unhappiness can be cured with a dog or clarinet lessons. Taken in small groups, they form movements. All together, they are a symphony. A panopticon view into a near future completely altered by the addition of one fundamentally disrupting technology.

It is sci-fi in its most perfect expression — no robots, no explosions, no car chases. Reading it is like having a lucid dream of six years from next week, filled with people you don't know, but will. And its quietness is what belies any easy attempt to dissect it. Tell The Machine begins on just another day at the office. Later, it ends in roughly the same place. And yet between those two cardinal points, everyone involved has changed, grown, been altered by events they sometimes don't even witness themselves. Some of them are happier. Some are not. The machine promises a prescription for happiness, after all (eat more tangerines, quit your job). But it's up to you whether you take its advice.