Accessibility links
Dino Vs. The Volcano: 'Jurassic World: Fallen Kingdom' Generates Intermittent Heat In this derivative but fitfully inventive fifth installment of the Jurassic franchise, our heroes try to rescue Isla Nublar's dinosaurs from extinction-by-lava, only to get their ash handed to them. 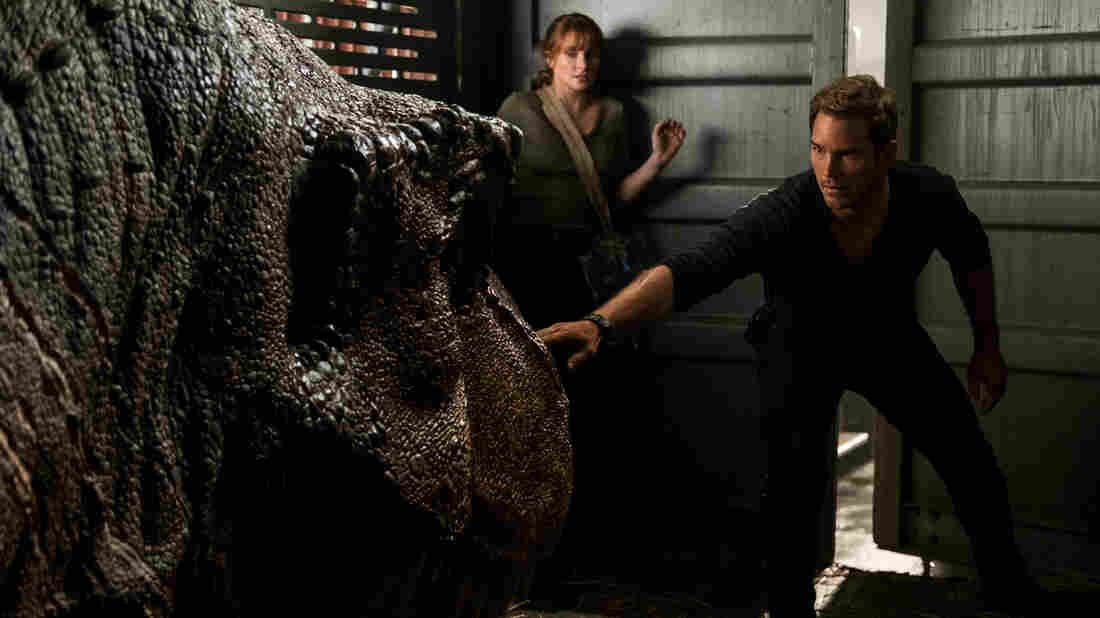 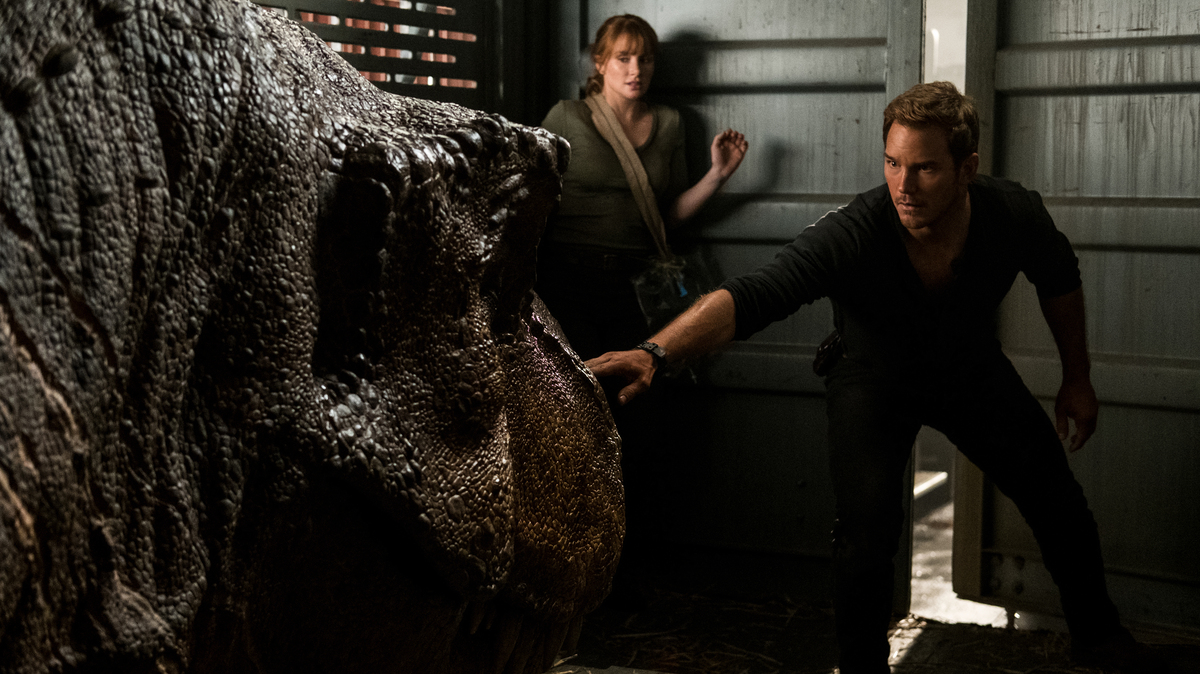 Children are plagued by the occasional certainty that there's a monster in their basement, if not right under their bed, and they're almost always wrong. Jurassic World: Fallen Kingdom, the follow-up to 2015's mediocre but hugely successful revival of the Jurassic franchise, is the exception that proves the rule.

This fifth installment is so desperate to recombine the strands of the 25-year-old series in a novel way that halfway through its ruuuuuuuun! time, it takes a bizarre but not unwelcome left turn, evolving from yet another sweaty Central American dino-safari into a Gothic haunted house flick.

Monsters in the basement. Monsters in the bedroom. Monsters on the auction block, with creepy Toby Jones holding the gavel! Oh, and a little girl (Isabella Sermon) whose stern-but-loving governess (Geraldine Chaplin) scolds her when her enunciation sounds too American. Jurassic World raked in the fifth-highest box-office take in film history, grossing a paltry $1.7 billion, so you can see why the filmmakers felt compelled to tweak the formula into something a little closer to Jurassic Wuthering Heights.

It turns out John Hammond, the eccentric billionaire who created Jurassic Park, had an equally rich and eccentric partner in that dodgy enterprise. His name is Benjamin Lockwood and he was never mentioned in the four previous films, but hey is that a velociraptor behind you? He's played by James Cromwell, a suitable replacement for Sir Richard Attenborough (d. 2014) as the movie's well-intentioned but criminally negligent old doofus. Lockwood, who lives in a spooky, San Simeon-like estate, feels responsible for the dinos he helped bring back into the world and wants to see that they're protected from further human interference.

Anyway, Fallen Kingdom's dream-logic back half — because even in a fiction where we accept that cloned dinosaurs have once again walked the earth for a quarter century, there's no other way to reckon how the events of this film could unfold over a single day and night — supplies enough weirdness and even camp to buoy Fallen Kingdom right up to the, er, middle of the Jurassic pack.

Which is to say: It's not even as good as 1997's The Lost World, the one sequel for which pioneering dino-jockey Steven Spielberg and star Jeff Goldblum returned. Just like the new entry, The Lost World involved a heavily armed paramilitary group let by a Great White Hunter type (Pete Postlethwaite back then, Ted Levine from The Silence of the Lambs now) set on capturing the beasts, while Team Goldblum tried to protect the noble, unholy abominations created by human vanity. There was even a third act where the T. rex got loose on the mainland.

But as derivative as Fallen Kingdom is, it's still a step up from its immediate ancestor. J.A. Bayona is simply a stronger, more distinct filmmaker than Colin Trevorrow, the greenhorn who landed the Jurassic World assignment on the strength of a single well-liked indie feature, Safety Not Guaranteed. (Trevorrow shares writing credit on the new movie with Derek Connolly, his Safety Not Guaranteed co-writer.)

Bayona has the Spanish-language horror movie The Orphanage and the disaster epic The Impossible under his belt, and he draws upon them more or less equally to give Fallen Kingdom its passing quotient of haunting images (a brachiosaur warbling mournfully as the gentle giant is swallowed up by smoke and ash, for example) and pulse-quickening scares.

Even the so-so first half has its moments of inspiration: There's a particularly impressive set piece involving one of those transparent hamster-wheel gyro-spheres from Jurassic World, and a fun bit of ghoulish slapstick in which Chris Pratt's temporarily compromised Owen faces down a slowly advancing pool of lava.

Yes, Pratt and Bryce Dallas Howard have returned, though their presence feels unnecessary. She wears more sensible shoes this time and he actually smiles once or twice, but they're still just a pair of nice-looking mannequins whose supposed attraction to one another remains the most singularly unpersuasive feat of chemistry in the Jurassic cycle. (They're both signed for the next sequel, due in 2021.)

Finding some reason for the survivors of a mass-casualty catastrophe to voluntarily return to the birthplace of their nightmares is one of the perennial problems of sequels in this genre, and the Jurassic-iad especially. Howard's character has experienced an unlikely shift from cool and unsympathetic Jurassic World executive to running some kind of dinosaur-rights nonprofit. Lockwood's executor (Rafe Spall) lures her back out of her humanitarian concern for the scaly inhabitants of Isla Nublar, who face re-extinction at the hands of a conveniently reawakened volcano. (The expedition needs her handprint to access the abandoned park's security system, but they downplay that part.) He in turn charges her with recruiting Pratt's velociraptor-whisperer dude, relying on his attachment to Blue, the vicious, genetically engineered predator he trained from birth to obey his commands. It's basically the world's bloodiest pyramid scheme. ("I should just build a house, drink beer and play pool all day while these dinosaurs go extinct?" she asks him, after calling him away from the house he's building with an invitation to drink beer and play pool.)

Hip youngsters Daniella Pineda and Justice Smith replace hip youngsters Lauren Lapkus and Jake Johnson from the prior movie, playing a tough "paleo-veterinarian" and a fraidy-cat IT guy, respectively. You'll recall the original Jurassic Park featured Samuel L. Jackson as its second-chair computer whiz; one thing these big movies are useful for is the time-capsule effect they provide of whose career was rising when. Anyway, Pineda is very good at wringing some comic spunk out of her ho-hum material in a manner we might call Goldblumian (though he shows up for a minute, too). She gets to perform what might be the cinema's first dinosaur blood transfusion, and extracting that big bag o' blood from a slumbering Tyrannosaur is one of the film's more diverting bits of business.

Elsewhere, the plot picks up Jurassic World's thread of even deadlier, wholly artificial dino breeds being marketed as weapons of war, though no one in these movies has explained or even tried to explain why an obedient dinosaur would be more deadly or more accurate than an armed drone. They're definitely cooler, though. Fallen Kingdom's newest specimen, the Indoraptor, has a punk 'do like Spike from Gremlins, and it can do pullups when necessary. (Bye-bye, tiny T. Rex arms.) Alas, the thing shows up too late in the movie to give us much of a chance to fall in hate with it. At least it arrives pre-housebroken.