Accessibility links
Doc Comes For 'The King' And Doesn't Miss Filmmaker Eugene Jarecki masterfully explores Presley's life as a metaphor for America as he drives the late singer's 1963 Rolls-Royce across the country, interviewing those he meets along the way.

Elvis Documentary Comes For 'The King' — And Does Not Miss

Elvis Documentary Comes For 'The King' — And Does Not Miss 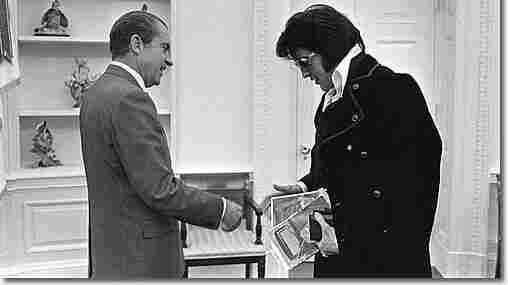 In "a mad experiment" that pays off hugely, documentarian Eugene Jarecki examines Elvis Presley's life — including this meeting with Nixon — from the driver's seat of the singer's 1963 Rolls-Royce. Oscillloscope hide caption

"Not another Elvis movie," you scream at the heavens in the year 2018. "The man's been dead for four decades. Every part of him has been strip-mined for white-nostalgia money already. My parents just dragged me to the touring production of Million Dollar Quartet. Show some mercy, people."

First of all: point taken. Secondly: don't be cruel. You haven't seen The King yet. And you're going to want to. Oh, yes.

Eugene Jarecki's latest documentary is a hunk-a, hunk-a burning zeitgeist, the kind of movie that just might shake you from your sleep at night weeks later. Far from an HBO greatest-hits biography, The King dares to use Elvis Presley as a metaphor for everything that's wrong with our country, while still paying tribute to his lasting qualities and the folks he managed to inspire from every walk of life. It makes leaps of logic that defy all common sense, and yet somehow everything clicks together in a grand display of cinematic fireworks, scored to generations of musicians that came before and after the film's subject. It is, as an interviewee says, "one of those epiphanies where thousands of meanings come crashing down at once."

How to describe what's going on here? Jarecki has rented Presley's 1963 Rolls-Royce for a road trip across America, making stops at significant signposts of his life: his birthplace in Tupelo, Mississippi; his early recording success in Memphis; his status upgrade in Nashville; his lost period in Hollywood making terrible teenybopper movies; his final, bloated, saggy years in Las Vegas; and many more in-between.

At each location, the story of how this poor "white man with a Negro sound" rocketed to the outermost stratosphere of rock fame is juxtaposed with commentary on the state of the country he inherited, and then left behind when he keeled over on the toilet at age 42. Bluegrass and gospel singers climb into the plush backseat, as do rappers, actors, politicians and random people Jarecki happens to meet along the way. The Rolls-Royce breaks down at one point. It's a thrill.

In the telling of it, Elvis was eaten by the American Dream. He found success in the 1950s by adapting (or, many argue, stealing) black music for a white audience, gave nothing back to the culture he was cribbing from and then utterly ignored his own well-being in the face of massive success. The film dwells not on the King's hits but on all the career decisions he made that seemed to defy common sense, that slowly led to his undoing: enlisting in the military and shipping out to Germany at the height of his popularity; signing a record-setting movie contract instead of developing his sound; living out his remaining years in Vegas feeding his pill addiction with another lucrative payroll. Some of that gets chalked up to the notorious "Colonel" Tom Parker, Elvis's scheming manager who could see, for example, how easy it was to brand a celebrity with patriotism just by signing him up for duty. But the man himself also was lured by the drugs of fame and money, and so he wanted, or perhaps was destined, to corrupt his talents.

And as goes the King, so go his subjects. "If Elvis is your metaphor for America," rapper Immortal Technique says in the days leading up to the 2016 election, "we're about to O.D." The film teases out thread after thread of how we can reframe the singer's successes and failures from a modern perspective, from segregation to cultural appropriation to bank deregulation. It doesn't all make sense, and there are a few moments as tacky as Graceland itself, like the decision to frame the current residents of Presley's boyhood neighborhood in Tupelo in harsh, ugly close-up as Jarecki interviews them in their own kitchen and they yell about their town "going to hell." But the film is self-aware enough to play out its own arguments against itself. The Wire creator David Simon, a buddy of Jarecki's, criticizes the director for leaning his American film so heavily on a foreign-made car. There's only a select audience that can watch two writers arguing over what makes a good metaphor, but to that audience, this movie is catnip.

What carries us through this mad experiment is a sense of commonality through the oral tradition, a reminder that Elvis's story is one of our shared myths. Historian Steve Fraser can start telling a story about "the American Experiment," then hand it off to Ethan Hawke to tell us how the singer got his big break at Sun Records, and then Hawke can kick it over to Chuck D to tell you what it all means, and 14-year-old country music prodigy EmiSunshine might be playing us through. You might think the last thing you want to see is Ashton Kutcher wax philosophical on anything, but then the sitcom star hits you with the weary observation that he believes his level of fame has eclipsed his talent, and how he shouldn't by any rights be this much of a sought-after public figure, and then things start to click. "Based on what I've done professionally, I should not be getting this much attention," he sighs, as fans scream his name from outside the Rolls-Royce like he's just another Elvis.

Jarecki has always placed politics front-and-center in his storytelling, having previously taken on the military-industrial complex with 2005's Why We Fight and the War on Drugs with 2012's The House I Live In. But here he's refined his style, sneaking in attack points so that we don't even realize when he's attacking. He's also better at minimizing his own presence in front of the camera while still being transparent about authorial intent so that we always know this is theater (we see his crew affixing equipment to the hood of the car, for instance). And Jarecki and his team of editors leverage all the commotion to their advantage, especially in the ferocious montage that brings the film to a close, scored to a televised cover performance of "Unchained Melody" that Elvis gave weeks before his death.

"Time goes by so slowly," the King croons from the piano, sweat pouring from his numbed, pudgy face, as the next 40 years fly by the rest of us like a bad dream: The glove don't fit, the towers fall, the levees break. Watching the scene feels like we're all synchronizing our watches to a better way to talk about entertainment, nostalgia and fame. Instead of "escaping from the real world," we can have a productive conversation about it. Against all odds, Elvis lives.