Accessibility links
Conservative Media Failed To Redefine Debate On Trump's Immigration Policy Media outlets such as Fox News and Breitbart defended the president and his zero tolerance policy on the border. But the narrative began to unravel as it became clear Trump would reverse course. 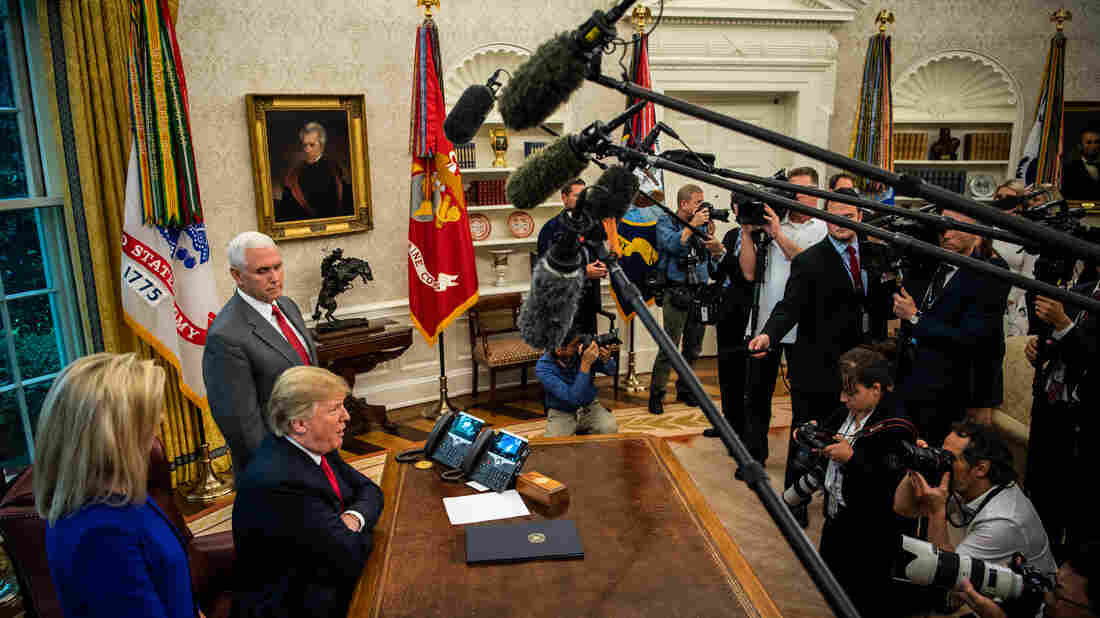 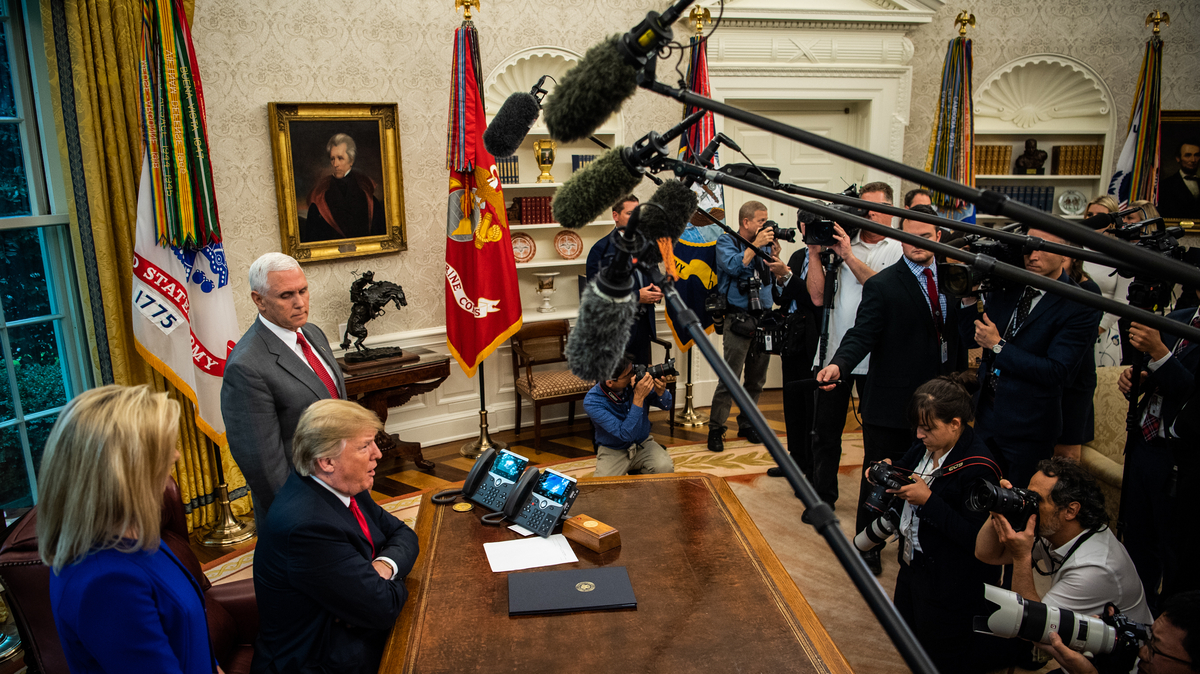 President Trump, with Secretary of Homeland Security Kirstjen Nielsen and Vice President Pence, speaks after signing an executive order ending the practice of separating migrant families. But the move leaves many questions unanswered

As President Trump faced growing outrage over his child detention policy on the U.S.-Mexico border, conservative outlets like Fox News and Breitbart scrambled to his defense. They urged Trump to stand firm, describing the forced separation of migrant children from their families as part of a strategy to keep America's borders safe.

But by Wednesday afternoon, that narrative began to unravel as national outrage grew and it became clear the president would reverse course. On Rush Limbaugh's conservative talk radio program, one caller said that this time the fight might not be winnable.

"They've got Trump, they've blown Trump up," Limbaugh said, voice rising in disappointment. "He's got to reunite families or it's over?"

"It's these photographs [of children]," the caller said. "They finally got something that they can stick to him I think."

During past scandals and debates over controversial policies, Trump and right-leaning media appeared to work closely together, pummeling the president's critics while echoing arguments and developing themes. At the same time, the White House has aggressively dismissed mainstream media coverage as "fake news" designed to harm Trump.

This time, however, the administration and its media allies faced a different kind of pressure. Powerful audio and images of crying children held in federal detention facilities went viral. The country's more liberal-leaning media amplified the indignation, with Rachel Maddow appearing to choke up during her show on MSNBC while attempting to read about "tender age shelters."

"Trump administration officials have been sending babies and other young children," Maddow said, shaking her head with emotion before deciding she could read no more. "I think I'm going to have to hand this off."

In conservative media favored by Trump and many of his supporters, the story often looked and sounded starkly different: websites like Breitbart, The Daily Caller and Drudge Report worked to redefine the debate, describing the border crisis as a manufactured media event, concocted by Democrats and advocates of liberal immigration policies.

Conservative commentator Ann Coulter said in an appearance on Fox News, "These child actors weeping and crying on all the other networks right now," adding, "Do not fall for it, Mr. President."

Trump seemed committed to holding the line. He tweeted defiantly that critics of his tough border policies want undocumented immigrants to "infest" the United States. On Fox News, hosts echoed the argument, claiming Trump was defending the border from waves of impoverished and dangerous refugees.

"Their goal is to change your country forever," argued Fox host Tucker Carlson Tuesday, referring to those who favor liberal immigration policies. "They're succeeding by the way."

Another Fox host, Laura Ingraham, said Tuesday, "The American people are footing a really big bill for what is tantamount to a slow-rolling invasion of the United States." Ingraham also suggested that detention facilities being built for children resemble "summer camps."

It's unclear how much this back and forth in the media influenced Trump. As he prepared to sign his executive order on Wednesday, some conservative outlets pivoted and began voicing dismay at what they described as a major capitulation. Breitbart News ran a headline on its homepage claiming Trump had "buckled." The influential website that often cheerleads Trump argued bluntly that he had caved to "left-wing hate."

Limbaugh, meanwhile, warned that any retreat from tough immigration policies might divide Trump from his base. "The only person who can blow up this relationship [with conservative voters] is Trump himself," the radio host told his audience Wednesday. "The media is attempting to force Trump to do things to make you start doubting, to make you start questioning."