Accessibility links
Koko The Gorilla Dies; Redrew The Lines Of Animal-Human Communication Koko fascinated and elated millions of people with her facility for language and her ability to interact with humans. She also gave people a glimpse of her emotions.

Koko The Gorilla Dies; Redrew The Lines Of Animal-Human Communication

Koko The Gorilla Dies; Redrew The Lines Of Animal-Human Communication 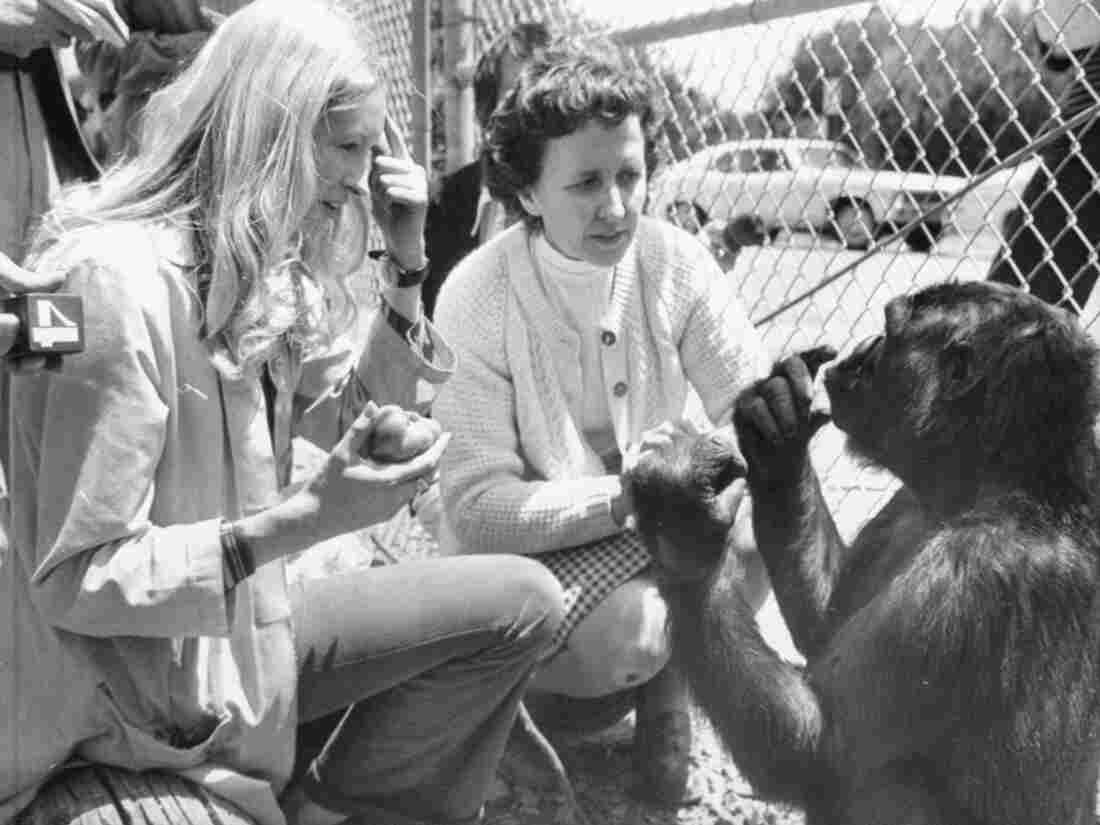 Koko, the gorilla who became an ambassador to the human world through her ability to communicate, has died. She's seen here at age 4, telling psychologist Francine "Penny" Patterson (left) that she is hungry. In the center is June Monroe, an interpreter for the deaf at St. Luke's Church, who helped teach Koko. Bettmann Archive/Getty Images hide caption 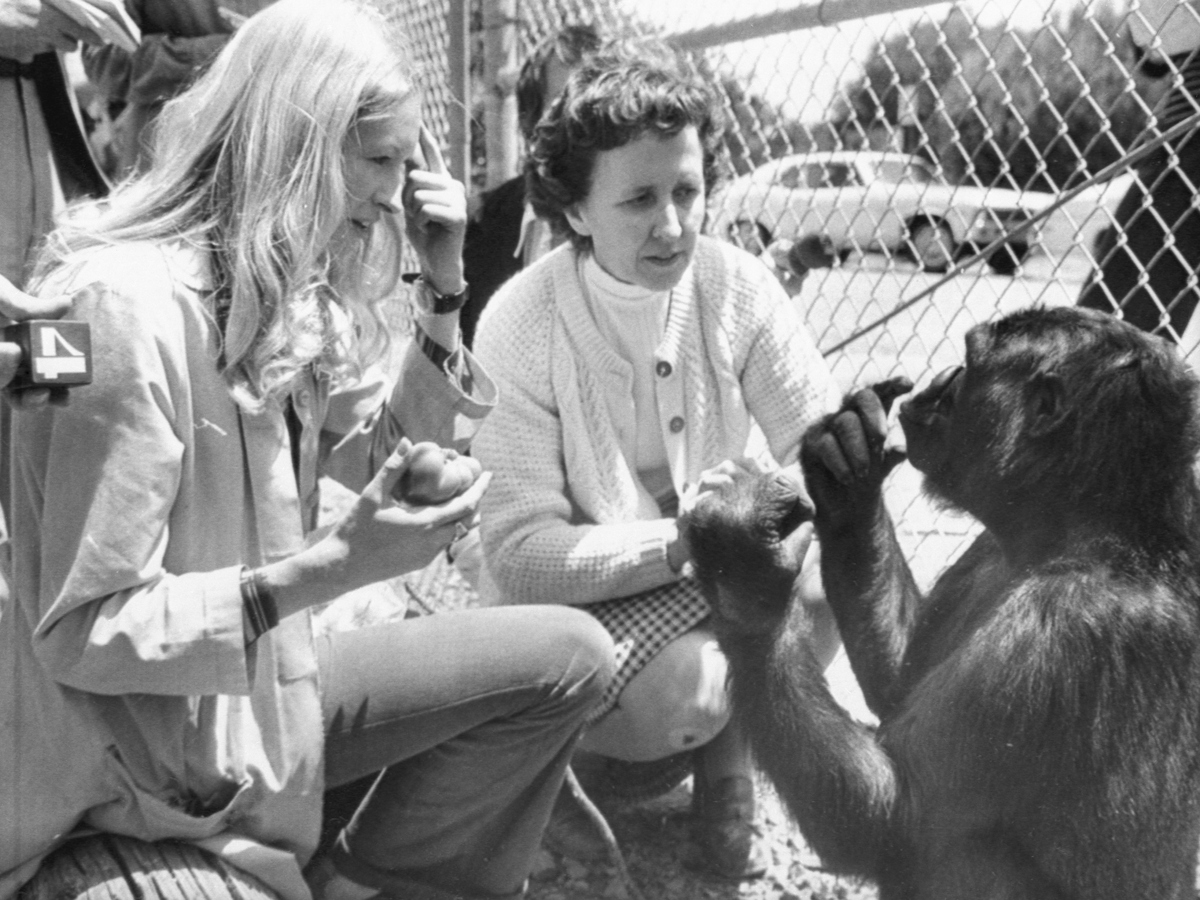 Koko, the gorilla who became an ambassador to the human world through her ability to communicate, has died. She's seen here at age 4, telling psychologist Francine "Penny" Patterson (left) that she is hungry. In the center is June Monroe, an interpreter for the deaf at St. Luke's Church, who helped teach Koko.

"The Gorilla Foundation is sad to announce the passing of our beloved Koko," the research center says, informing the world about the death of a gorilla who fascinated and elated millions of people with her facility for language.

Koko, who was 46, died in her sleep Tuesday morning, the Gorilla Foundation said. At birth, she was named Hanabi-ko — Japanese for "fireworks child," because she was born at the San Francisco Zoo on the Fourth of July in 1971. She was a western lowland gorilla.

"Her impact has been profound and what she has taught us about the emotional capacity of gorillas and their cognitive abilities will continue to shape the world," the Gorilla Foundation said.

Throughout her life, Koko's abilities made headlines. After she began communicating with humans through American Sign Language, she was featured by National Geographic — and she took her own picture (in a mirror) for the magazine's cover.

That cover came out in 1978, seven years after Koko was chosen as an infant to work on a language research project with the psychologist Francine "Penny" Patterson. In 1985, the magazine profiled the affectionate relationship between the gorilla and her kitten: Koko and All Ball.

In 2001, Koko made a fast friend in comedian Robin Williams, trying on his glasses, showing him around and getting him to tickle her. Then they made faces at each other — and the gorilla seemed to recall seeing Williams in a movie. Years later, in 2014, Koko was one of many who mourned Williams' passing.

Koko amazed scientists in 2012, when she showed she could learn to play the recorder. The feat revealed mental acuity but also, crucially, that primates can learn to intricately control their breathing — something that had been assumed to be beyond their abilities.

Her ability to interact with people made Koko an international celebrity. But she also revealed the depth and strength of a gorilla's emotional life, sharing moments of glee and sadness with researchers Patterson and Ron Cohn.

As Barbara J. King wrote for NPR about the BBC documentary Koko: The Gorilla Who Talks, when it aired on PBS in 2016:

"Famously, Koko felt quite sad in 1984 when her adopted kitten Ball was hit by a car and died. How do we know? Here is nonhuman primate grief mediated through language: In historical footage in the film, Patterson is seen asking Koko, "What happened to Ball?" In reply, Koko utters these signs in sequence: cat, cry, have-sorry, Koko-love. And then, after a pause, two more signs: unattention, visit me."

Thousands of people are commiserating on the Gorilla Foundation's Facebook page posting about Koko's death. The top comment comes from Jess Cameron:

"Legit bawling like a baby right now. This news just breaks my heart. From an early age I was fascinated with Koko and she taught me so much about love, kindness, respect for animals, and our planet."

Over the course of Koko's life, sentiments like that have been counterbalanced by questions about her ability to use language in original and complex ways. And for Koko and other research subjects, there has also been skepticism over how their handlers interpret the animals' behavior.

With Koko's passing, the Gorilla Foundation says it will honor her legacy, working on wildlife conservation in Africa, a great ape sanctuary in Maui, Hawaii, and a sign language app.

The foundation says those who want to share condolences can do so by emailing kokolove@koko.org.