Accessibility links
ICE Temporarily Closes Portland Office Amid Tumult Of Protests Across U.S. "Security concerns" persuaded Immigration and Customs Enforcement to shutter its office there for at least two days. But the Oregon city isn't the only place feeling unrest over immigration policy. 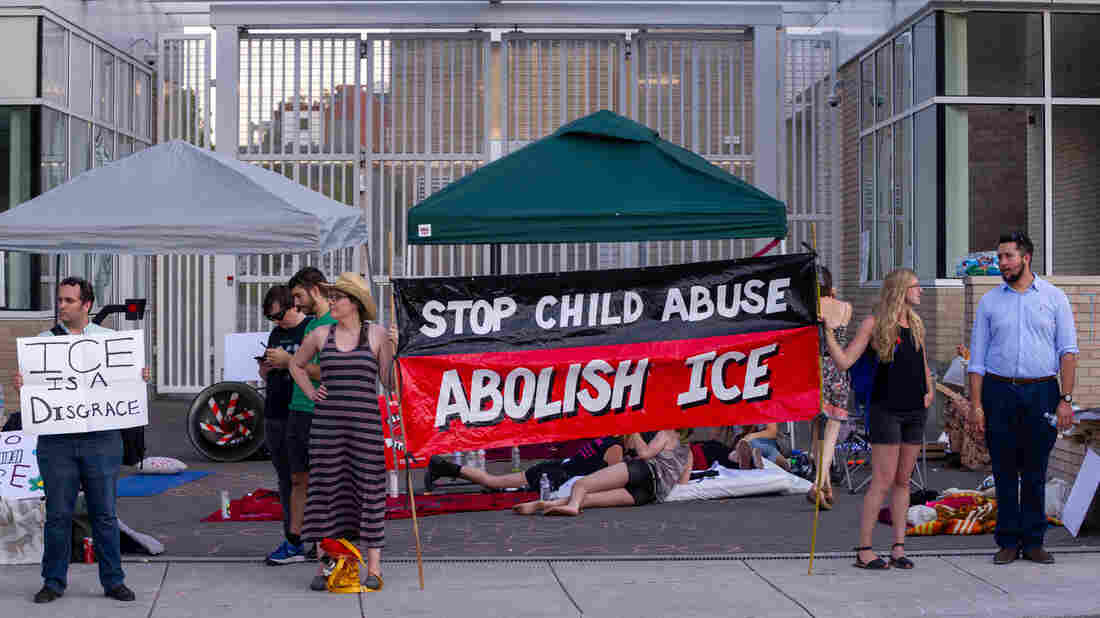 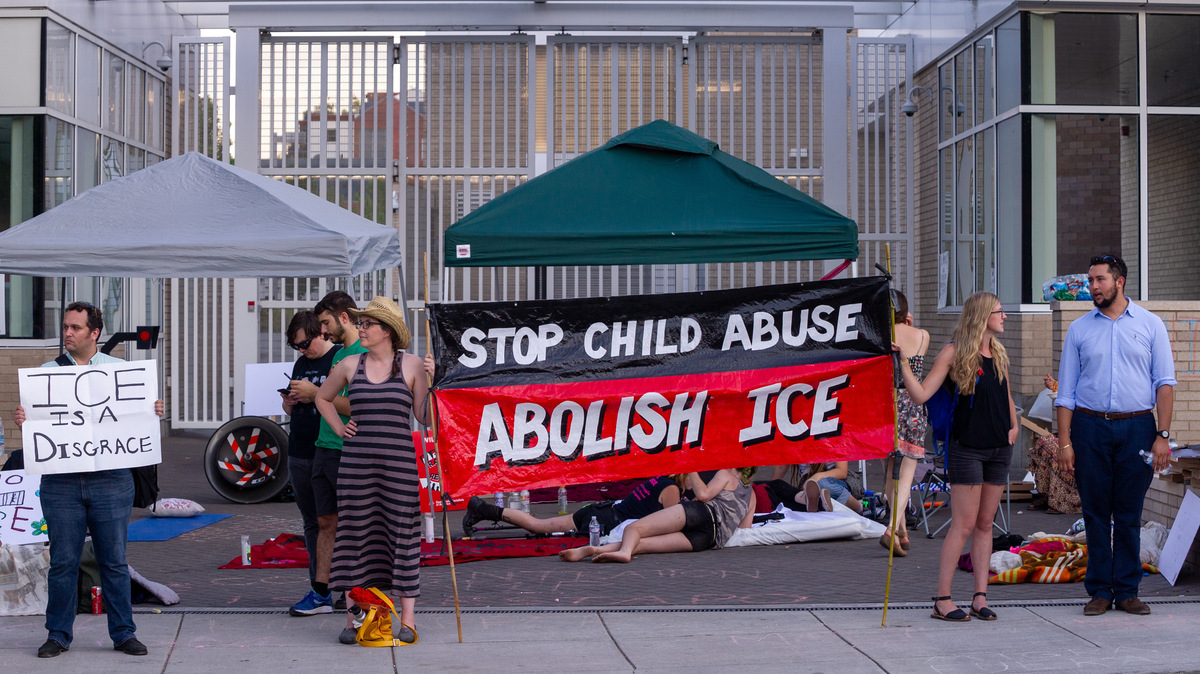 The regional office for Immigration and Customs Enforcement in Portland, Ore., stands quieter than usual. Since Wednesday, the keyboard clatter and quiet murmur of officials working inside have been replaced with an unfamiliar sound, coming muffled through the walls: the chatter of angry campers outside.

And that's precisely the way the demonstrators want it.

Their protest against President Trump's immigration policies began Sunday and by midweek had ballooned, thick with disgruntled residents toting signs, sleeping in tents and rallying crowds with a PA system. Eventually, ICE announced that the situation had become untenable.

ICE "fully respects the rights of all people to voice their opinion without interference. ICE remains committed to immigration enforcement consistent with federal law and agency policy," a spokesperson for the regional office told Dirk VanderHart of member station OPB.

The office remained closed for the same concerns Thursday — announcing the closure with a note that protesters are hurting the migrants they're advocating for, by delaying necessary sessions intended to inform ICE detainees of U.S. immigration law. 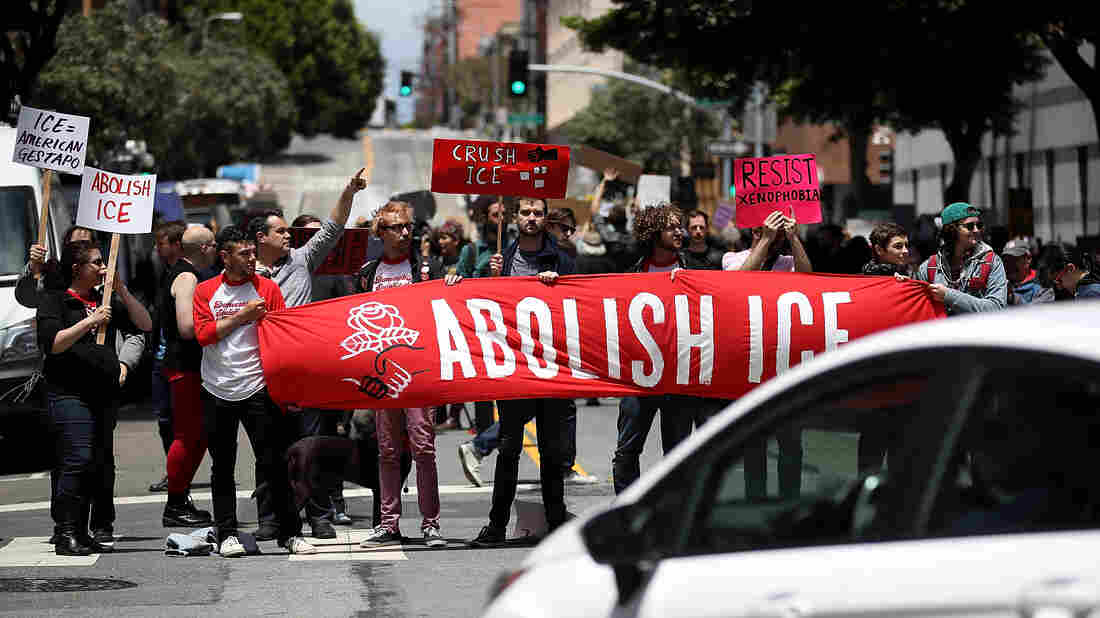 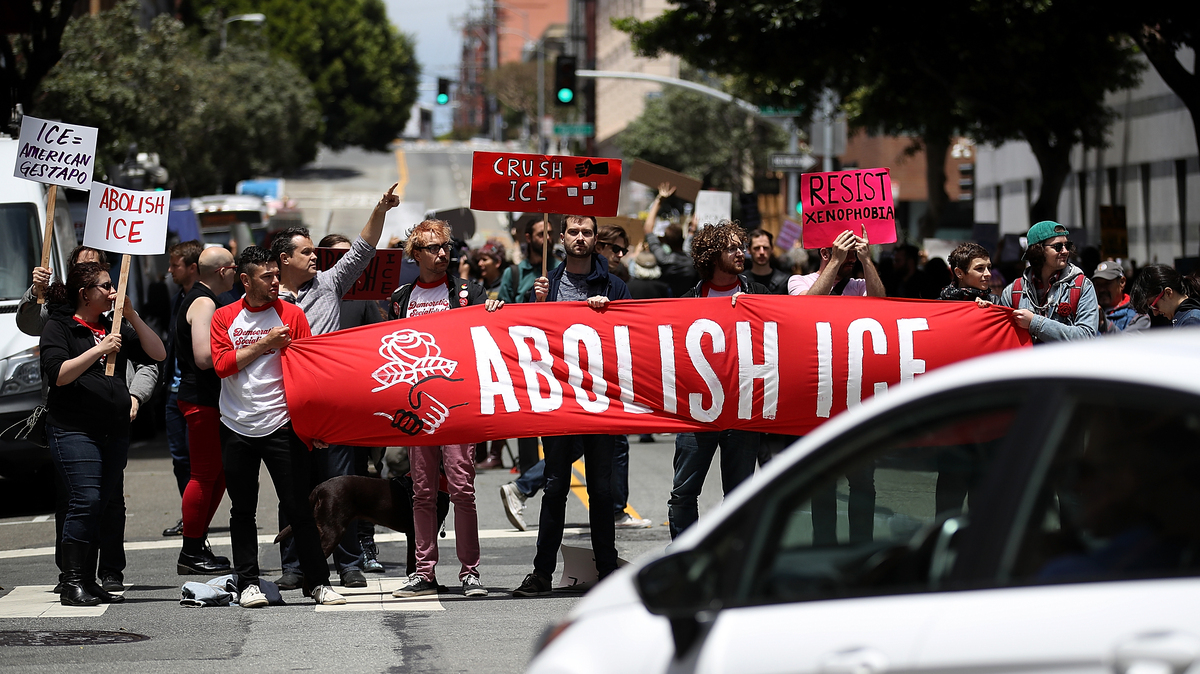 Protesters block a street outside the ICE office in San Francisco on Tuesday.

The demonstration in Portland, however, is not an exceptional case.

Similar protests have bubbled to the surface outside — and occasionally even inside — ICE offices and detention facilities in Baltimore, Los Angeles, San Francisco and even on Capitol Hill, where an interfaith network of local congregations gathered Thursday morning to denounce the Trump administration's hard-line immigration policy. Dozens of protesters held a series of sermons circling a cluster of children who had lain down on silver blankets.

"The children will symbolically represent the thousands of children separated from families on the border, sleeping on floors and held in cages," the group explained before the action.

In the face of this widespread backlash, Trump appeared to retreat Wednesday from the most controversial element of his "zero-tolerance" policy, the separation of migrant children from their parents along the U.S.-Mexico border.

After repeated denials from administration officials that Trump could end the practice without Congress, Trump signed an order ending the practice without Congress. (Although, as NPR's Richard Gonzales notes, the move raises the possibility of another legal headache and leaves unclear what, exactly, will happen to the more than 2,300 children already separated from their parents.)

House Republican leaders hit some roadblocks of their own Thursday. Of the two bills on immigration policy that they were considering at the start of the day, the more conservative version failed in a floor vote and a vote on the more moderate version was postponed to Friday as leaders sought more support.

In the meantime, Trump vowed Thursday that his administration is "acting swiftly to address the illegal immigration crisis on the southern border."

And protesters are vowing to keep resisting his preferred approach.

"For far too long, we have allowed this evil to continue, and it will not continue any longer," said one of the faith leaders at the Capitol Hill protest Thursday. "We will pray ... we will vote, we will march — we will protest until victory is won."