Accessibility links
Trump's Migrant Family Policy Now Moves To The Courts At issue: How should cases proceed and what should happen to the more than 2,000 immigrant minors already detained in light of the president's executive order? 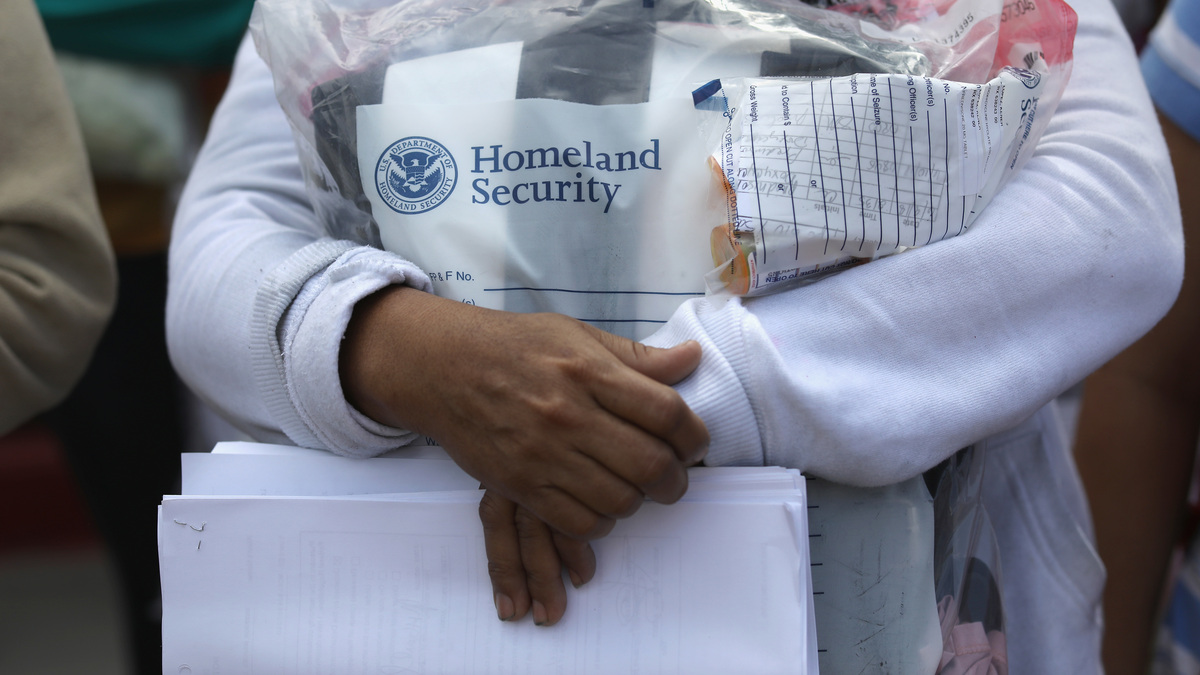 The controversy over President Trump's executive order to end the policy of separating migrant families who cross into the U.S. illegally is shifting to the courts.

On Thursday, the Department of Justice asked a federal judge in California to relax certain limitations on how long and under what conditions the government can detain migrant children.

In another courtroom in California, a different federal judge will hear arguments on Friday in a case about family separations and the status of the more than 2,000 minors who are still detained.

That case, Ms. L v. ICE, involves a Congolese woman who came to this country seeking asylum at a port of entry near San Diego. Immigration agents whisked her 7-year-old daughter away to a facility in Chicago for four months before the two finally reunited in March.

The American Civil Liberties Union filed a class-action lawsuit and is seeking a nationwide preliminary injunction.

The judge in the case, Dana Sabraw, a Bush appointee, is holding a status conference via telephone with lawyers from the government and the ACLU to discuss how the case should proceed in light of the president's executive order.

There are two outstanding issues, according to the ACLU. First, what happens to the more than 2,000 minors who remain detained? The executive order did not say how or when they would reunite with their parents.

The second issue is that the administration appeared to give itself a loophole to resume family separations if, in the government's view, keeping a parent and child together poses a risk to the child's welfare. And the government would decide when there is such a risk.

"So we are, in short, going to ask the court to order prompt reunification of the 2,000 plus kids who have already been separated," said the ACLU's Immigrant Rights Project Deputy Director Lee Gelernt. "And to issue an injunction laying down standards when the government can separate in the future."

When contacted by NPR, the Department of Justice had no comment on this status conference or whether the administration again would seek a dismissal.

The DOJ had more to say about the Flores settlement, another major court case affecting immigrant minors. The settlement in the Flores case, reached in 1997 during the Clinton administration, basically lays out how long and under what conditions the government can hold an immigrant minor. In 2015, federal judge Dolly Gee in Los Angeles modified the settlement, ruling that immigrant minors can't be kept in jail-like settings for long. An appellate court later ruled that minors can be held for no more than 20 days.

The Justice Department is asking Judge Gee to modify that settlement in two ways. One, the government wants to hold minors together with their parents for longer than 20 days, or as long as it takes to have the asylum case of the parents adjudicated — which is to say, indefinitely.

And two, the administration wants the ability to house families in facilities that are not state licensed, as is currently required by the Flores settlement.

The likelihood that the administration can persuade Gee to modify the Flores agreement is slim. Especially since the administration, in its court motion, all but blames the settlement and Gee for the surge of families coming here to seek asylum. The administration says it can't detain and keep families together if it has to release children within 20 days.

Given Gee's past rulings, there aren't many legal experts who will predict that she would change course now.

There's no reason to expect that court battles against the administration's family separation policy will subside soon. The attorney general of the state of Washington, Bob Ferguson, announced that his state and eight others are filing a lawsuit against the Trump administration. The suit alleges that the government violated constitutional due process rights and equal protection guarantees by separating migrant families.