Accessibility links
Crying Toddler On Widely Shared 'Time' Cover Was Not Separated From Mother The image has been tied to a border policy separating migrant families. But in this case, daughter and mother were detained together — and the White House says it's proof the controversy is overblown. 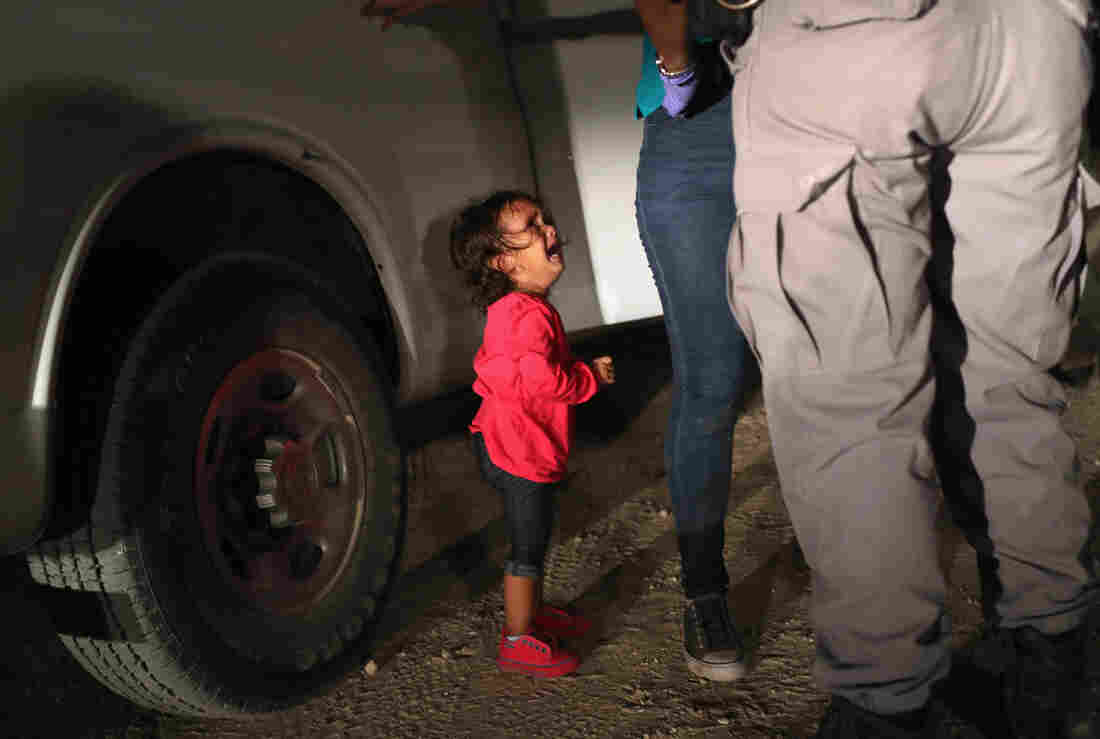 A 2-year-old Honduran girl cries as an official searches her mother in McAllen, Texas, near the U.S.-Mexico border, earlier this month. For many, the image has become indelibly associated with a Trump administration policy that for weeks separated migrant children from their parents — but the girl's father says she was not separated from her mother. John Moore/Getty Images hide caption 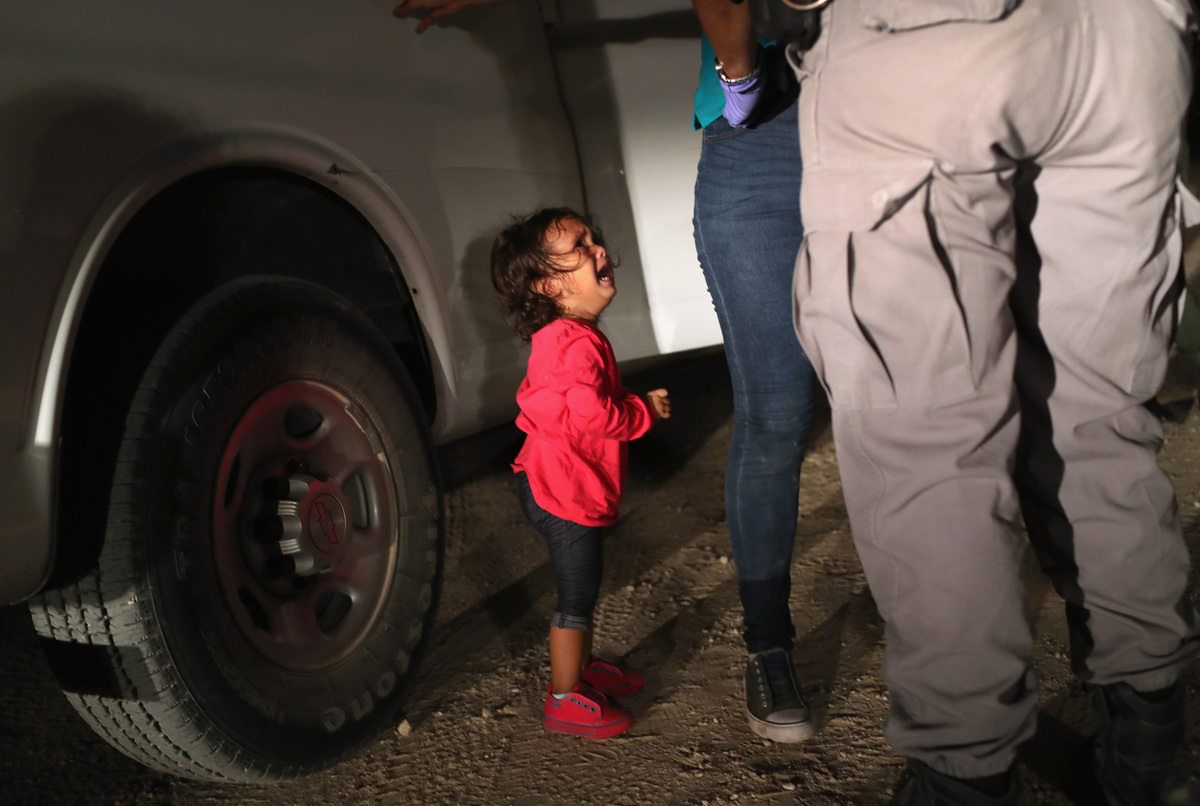 A 2-year-old Honduran girl cries as an official searches her mother in McAllen, Texas, near the U.S.-Mexico border, earlier this month. For many, the image has become indelibly associated with a Trump administration policy that for weeks separated migrant children from their parents — but the girl's father says she was not separated from her mother.

In the image, a little girl wails in uncomprehending sadness and anxiety.

Her face flushed nearly as pink as her shirt and shoes, she stares up at her mother and a U.S. official, both too tall to be seen. The 2-year-old Honduran child's panic is so palpable, it's difficult for a viewer not to feel it, too.

Perhaps it's little wonder, then, that the photograph became linked with the controversy over a Trump administration policy that had, before the president walked it back Wednesday, separated more than 2,300 migrant children from their parents since early May.

The image has traveled so widely and has become so recognizable, Time could pull her figure out of context and set it beside a looming Trump on the magazine's latest cover, rendering it a symbol of the "reckoning after Trump's border separation policy."

TIME’s new cover: A reckoning after Trump's border separation policy: What kind of country are we? https://t.co/U4Uf8bffoR pic.twitter.com/sBCMdHuPGc

There's a complication, though: The little girl was not ultimately separated from her mother, according to her father. The man, whom Reuters identified as Denis Valera, has told multiple media outlets that mother and daughter were detained together while seeking asylum in Texas.

Border Patrol agent Carlos Ruiz backed this account in an interview with CBS News. He said that when he encountered 32-year-old Sandra Maria Sanchez after her illegal crossing, he detained her for a proper search — but asked her to set her daughter down before doing so.

"So the kid immediately started crying as she set her down," Ruiz told the network. "I personally went up to the mother and asked her, 'Are you doing OK? Is the kid OK?' and she said, 'Yes. She's tired and thirsty. It's 11 o'clock at night.' "

"They're using it to symbolize a policy, and that was not the case in this picture," he added. "It took less than two minutes. As soon as the search was finished, she immediately picked the girl up, and the girl immediately stopped crying."

The White House pointed to the father's comments as proof the firestorm of controversy over Trump's policy was overblown — and singled out two of Trump's frequent targets as perpetuating it.

"It's shameful that dems and the media exploited this photo of a little girl to push their agenda," press secretary Sarah Sanders tweeted Friday. "She was not separated from her mom. The separation here is from the facts. Dems should join POTUS and fix our broken immigration system."

It’s shameful that dems and the media exploited this photo of a little girl to push their agenda. She was not separated from her mom. The separation here is from the facts. Dems should join POTUS and fix our broken immigration system. #ChangetheLawshttps://t.co/Y6KrTp4Ulk

President Trump, for his part, tweeted just hours earlier that "Republicans should stop wasting their time on Immigration until after we elect more Senators and Congressmen/women in November."

The executive order he signed Wednesday ended his administration's policy of separating families at the border, though it remains unclear whether the alternative it presented can clear a likely legal hurdle — and questions persist about the fate of the children already separated from their parents during the past six weeks.

"Dems are just playing games, have no intention of doing anything to [solve] this decades old problem," Trump continued in his tweet. "We can pass great legislation after the Red Wave!"

A hard-line conservative bill on immigration failed a House vote Thursday, and GOP leaders had to delay a more moderate measure for lack of votes within their own party. And any legislation that passes is expected to face a steeper climb in the Senate.

A Latino Nonprofit Is Holding Separated Kids. Is That Care Or Complicity Or Both?

Meanwhile, Time has published a correction on a story referencing the image.

"The original version of this story misstated what happened to the girl in the photo after she [was] taken from the scene," read the correction on the story first published Tuesday. "The girl was not carried away screaming by U.S. Border Patrol agents; her mother picked her up and the two were taken away together."

Nevertheless, Time's editor-in-chief said he stands by the decision to use the image on the magazine's cover. Edward Felsenthal explained why in a statement:

"The June 12 photograph of the 2-year-old Honduran girl became the most visible symbol of the ongoing immigration debate in America for a reason: Under the policy enforced by the administration, prior to its reversal this week, those who crossed the border illegally were criminally prosecuted, which in turn resulted in the separation of children and parents. Our cover and our reporting capture the stakes of this moment."

The photographer who took the picture, John Moore of Getty Images, told NPR's Lulu Garcia-Navarro earlier this month that he doesn't know what happened to the mother and child after they were detained.

"I would very much like to know," Moore said. "Ever since I took those pictures, I think about that moment often. And it's emotional for me every time."

In a statement to NPR, Immigration and Customs Enforcement said Sanchez was transferred to ICE custody last Sunday and is now being housed at the South Texas Family Residential Center in Dilley, Texas. The agency says that for the sake of privacy, it does not release information on juveniles.

They also noted that Sanchez had been deported from the U.S. before, back in 2013 after immigration officials detained her in South Texas.

Valera told Reuters that the girl's mother left Honduras for the U.S., where she has family, without telling him she was bringing their daughter. He later saw the image of his daughter crying on television.

"Seeing what was happening to her in that moment breaks anyone's heart," he said.