Accessibility links
Muslim Sex Educators Forge Their Own #MeToo Movement #MeToo has given voice to victims of sexual harassment, including in religious communities. Among Muslims, a group of young people is creating its own movement to address abuse. 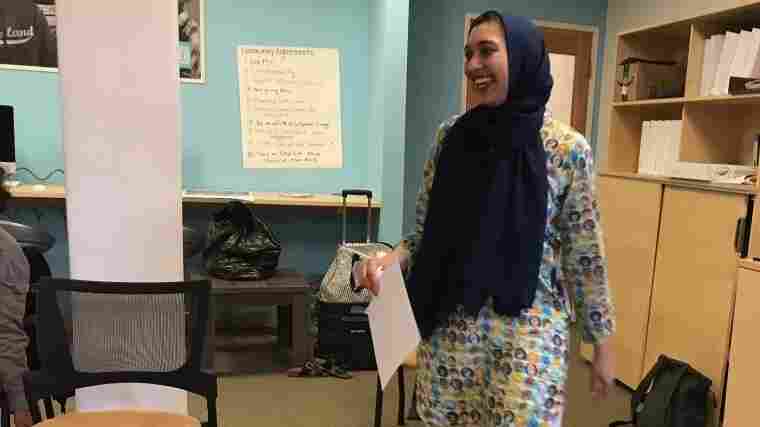 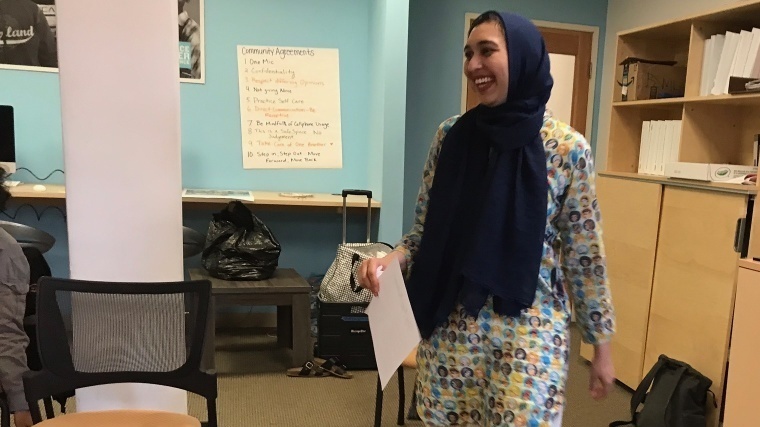 Sahar Pirzada, program and outreach manager for HEART, leads a workshop at Peace Over Violence in downtown Los Angeles.

Homam Almahdi grew up in a Syrian-American family in West Los Angeles, the oldest of four children. Bookish and sensitive, he worked hard in school, and went to mosque. All the time, he kept a secret from the world: when he was 8, he says he was sexually abused by a family friend, another Muslim.

"Growing up, I kind of believed that sexual violence was, just in general, a Western concept, like it doesn't happen to people who are Muslim," Almahdi says. "If you are spiritual enough, God will protect you from evil."

He didn't fully understand that he'd been assaulted until he took sexual health classes in middle school. And it wasn't until his freshman year at the University of California, Irvine that he wrote out an account of what had happened. He left it on his computer, searing into his hard drive.

Then, during his sophomore year, his life changed.

He took a campus workshop on sexual abuse in the Muslim community, put on by a national organization called HEART Women & Girls. All its sex educators are Muslim.

"It was really emotional for me because I hadn't ever experienced an event like that where somebody who was Muslim-identifying kind of knew what I had been through," Almahdi says.

HEART educators have been talking about sex and sexual assault for nearly a decade, creating their own #MeToo movement even before it had a name.

The organization, which has been growing its reach online and through training workshops, puts sex education in a cultural context, recognizing that Muslim survivors of sexual abuse, especially women, face obstacles to reporting the crimes both within and outside the community.

Sahar Pirzada, a HEART educator and graduate student in social work, leads workshops throughout southern California. She recognizes the trauma of abuse can be heightened in religious communities, where sex is not often openly discussed, and can lead to underreporting of sexual abuse.

Pirzada says that among Muslim survivors, women especially, there are fears about "who's going to marry me or like what will people think? Is this going to bring shame to my family?"

They also have to contend with the fact that Muslims face negative stereotypes in a post-9/11 world where hate crimes against Muslims have dramatically increased. Some survivors may have the added fear of fanning anti-Muslim sentiment by naming abusers. "Some things they might be thinking about are, 'Will this just make people be more Islamophobic and think that I'm experiencing this because I'm Muslim," Pirzada says.

Then there's the challenge of getting people to recognize sexual abuse when it's happening to them. HEART educators say, too often, that's not occurring. According to the group, some survivors aren't aware of basic anatomy and common sexual health disorders, and so don't have the language to describe if something wrong has taken place.

To promote conversation about sex and sexuality, HEART has put out a series of videos on everything from Pap smears to HPV and sexual dysfunction.

Pirzada says she wants to debunk the notion that sex is a taboo topic, and she points out that the Koran and other Islamic texts contain language promoting female sexuality.

"Islam, as a religion, is very sex positive," Pirzada says. "During the time of the Prophet, peace be upon him, they used to ask very specific and explicit questions about sex and about their bodies because it was part of their faith to be informed and to take care of themselves."

HEART holds workshops around the country at mosques, rape crisis centers and college campuses. Not everyone has embraced their work. Pirzada says one mosque turned down her offer to run a workshop and then soon after held its own workshop on modesty.

HEART members have not hesitated to criticize Muslim clergy or speak out in cases of alleged sexual abuse, as in 2015, when several women accused a respected, Chicago-area imam of molestation. Now, as the #MeToo hashtag blazes on, HEART educators such as Pirzada are cautious about their work being absorbed into the broader movement, which they see as led by famous, wealthy and mostly white women.

But they acknowledge that #MeToo has only further spotlighted the conversations that Muslim women like themselves have been pushing in their community.

In February, a Pakistani woman's Facebook post went viral in which she described what she says was her sexual assault during a Muslim pilgrimage to Mecca.

That prompted Muslim women from all over the world to describe similar stories, among them Egyptian-American activist Mona Eltahawy. She tweeted what she says was her experience and started the #MosqueMeToo hashtag.

The online world has helped unite Muslim survivors worldwide and given them a space to talk about sex and sexual harassment.

Pirzada came to join HEART because of a 2014 Twitter chat on Muslim sex education. After seeing Pirzada's tweets, HEART co-founder Nadiah Mohajir contacted her about working with the group.

Pirzada was drawn to outreach work because of her own difficulties getting proper attention for sexual health issues. She recalls how a white counselor saw her hijab and presumed her problems must have stemmed from Islam.

"It was one of those experiences where you're like, 'Are you really making these assumptions about like 'Oh, well maybe it's because your culture doesn't believe in this,'" Pirzada says. "That was literally part of the verbiage that was used in my therapy session."

Part of HEART's work is helping non-Muslim counselors learn how to treat Muslim clients. Wendy Blanco is an L.A.-based social worker who's gone through HEART training as a supervisor at the Pasadena office of Peace Over Violence, a nonprofit that assists survivors of domestic violence. She says she's not surprised that therapists might respond in "certain ways" to Muslim women wearing head scarves.

"What's important is for us to recognize how we're responding and how that affects the therapeutic relationship that we're building with folks," Blanco says.

It's also important for those working with survivors to recognize that abandoning one's faith is not the solution for many, says Najeeba Syeed, an associate professor of Interreligious Education at the Claremont School of Theology.

Syeed says that for many, religion can be a source of pain and comfort.

"That religious tradition is tied to their culture, to their language," Syeed says. "It's where they feel at home."

Almahdi says his faith got him through the trauma of being sexually abused by another Muslim.

"My experience helped me rely on a higher power," Almahdi says. "I kind of just admitted that this is something I can't really deal with and I want God to help me with it. That's how I think my faith became stronger."

For Almahdi, some of his best friends are in the Muslim Student Union at UCI with him. After he attended the HEART workshop, he told some of them what had happened to him. That prepared him to do what he dreaded most: telling his parents.

As it turned out, they were "very, very supportive," he says. "I love them so much. I'm really thankful for them."

His parents encouraged Almahdi to get therapy and these days, he volunteers for HEART on the UCI campus, one of the growing number of young men joining the group. For him, no Muslim who went through what he had should ever feel alone.