Accessibility links
France's World Cup Team Brings Positive Attention To Suburban Fans Eight of France's World Cup teams come from the suburbs of big cities — nonwhite areas known for poverty. France won in 1998 with a multiethnic team, bringing hope, but not much has changed since. 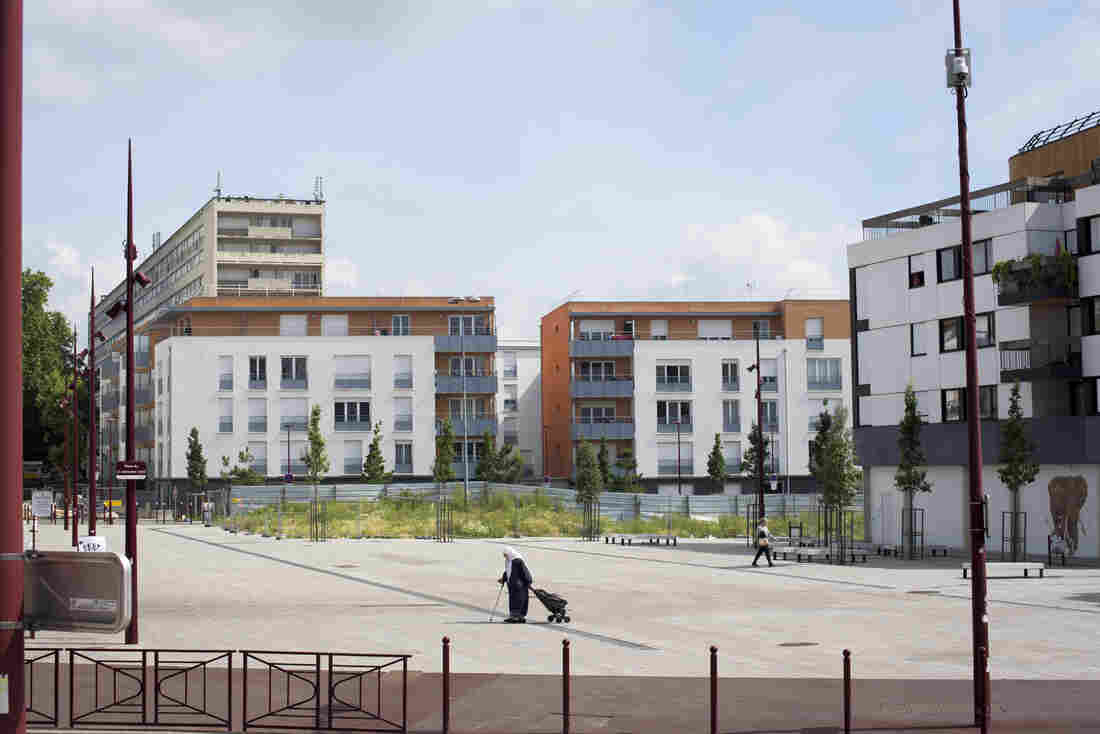 A woman walks through a square as an old housing project looms behind newer buildings in Bondy, a suburb of Paris, France. Pete Kiehart for NPR hide caption

As France competes in the World Cup, the makeup of the team is bringing some positive attention to some French who have been struggling with poverty and low expectations. Several team members are from "les banlieues," the mainly nonwhite working-class suburbs that surround many major cities such as Paris, Lyon and Marseilles.

One of the French team's stars, Kylian Mbappe, hails from the Paris suburb of Bondy. It's less than 10 miles from the beautiful center of Paris but feels like another world with its monolithic, cinderblock buildings. Bondy's mayor, Sylvine Thomassin, says the "Kylian Mbappe effect" is a real boost for the town.

"It's marvelous, because so often people talk about the suburbs in negative terms," she says. 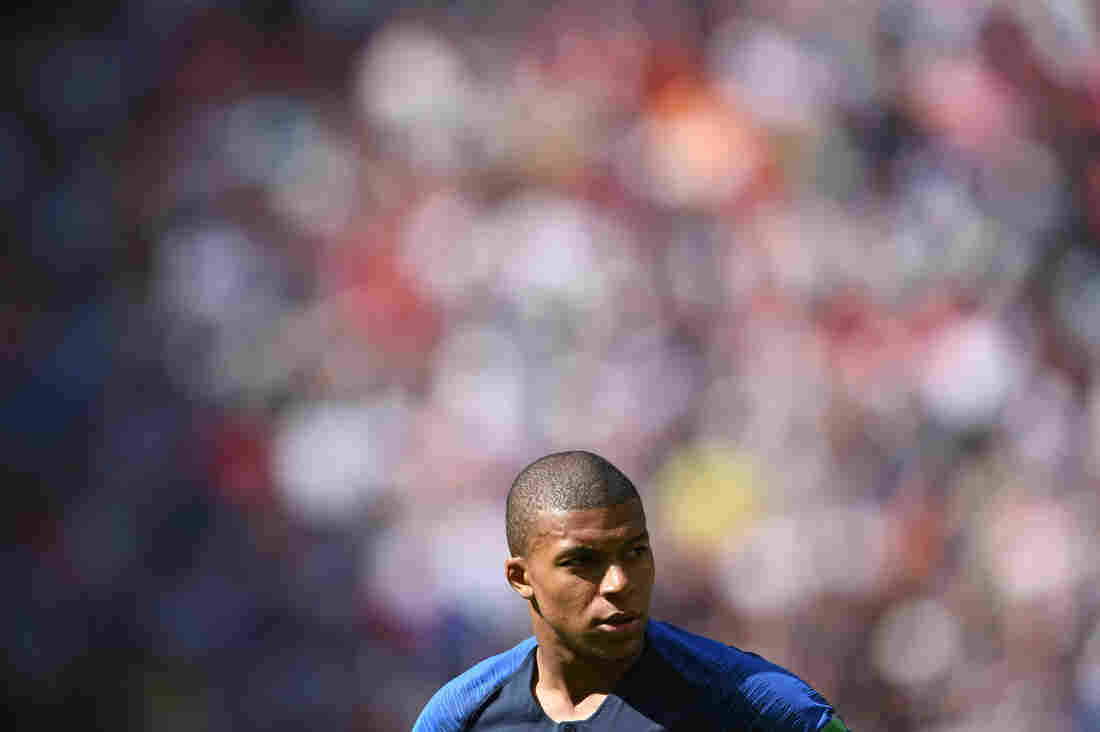 Thomassin says the Mbappes are an old Bondy family, going back three generations, but originally from Algeria and Cameroon. Starting in the late 1950s and '60s, immigrant workers — mostly from North Africa — flocked to France for the economic boom years. They worked in construction jobs and lived in suburban housing projects around the big cities. But today the jobs have dried up and the housing is crumbling. Many people living in the suburbs say they face discrimination not only over their Arabic and African origins, but also over their postal code.

In a parking lot next to one of the public housing blocks, Nordine Beta and a group of friends are listening to French rap music on a car stereo. Beta says it doesn't matter if Mbappe is from here, he refuses to support the French team.

"My parents are Algerian and I was born here. But I don't feel French," he says, "because my whole life people have asked me where I'm from. That means I'm still not accepted as French. I shouldn't have to justify myself." 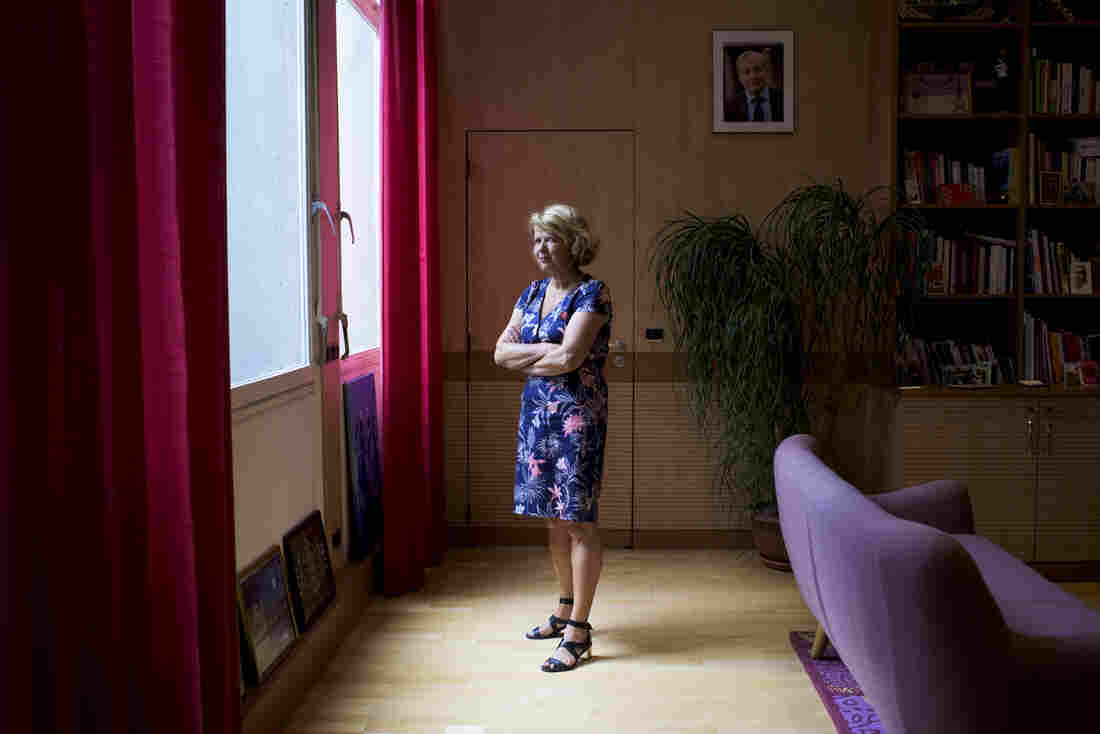 Mayor of Bondy Sylvine Thomassin stands in her office. She says the "Kylian Mbappe effect" is a real boost for the town. Pete Kiehart for NPR hide caption

Saco Fodié walks by. He's not part of Beta's group. He says it's great what soccer is doing for the suburbs.

"We are not seen in a positive light," he says. "It's known the schools aren't so good and a being from the banlieue can be synonymous with being a delinquent." 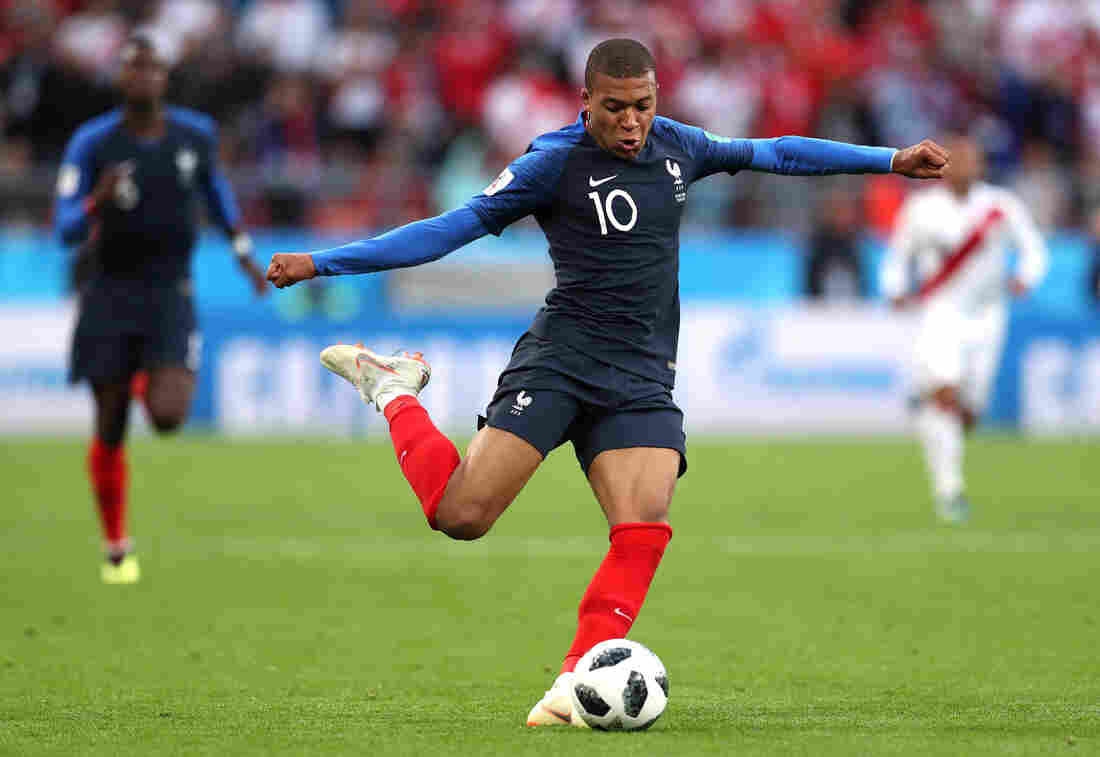 Kylian Mbappe plays during the 2018 World Cup match between France and Peru at Ekaterinburg Arena on Thursday. He scored the winning goal in the 1-0 match. Catherine Ivill/Getty Images hide caption

Twenty years ago, France won the World Cup with a racially mixed team — the famous "Black, Blanc, Beur" (referring to Arabs of North African descent) that was hailed as the harmonious future of the country. But a few years, later riots broke out in suburbs across the country over police racism. The hope turned to anger and despair. Successive governments' promises to fix the suburbs have largely gone unfulfilled. But many suburbs are now tackling their own problems.

In Bondy, old public housing blocks are being torn down and replaced by attractive, smaller housing units. Mayor Thomassin says there's an energy in the diverse suburbs that's missing from staid, traditional France.

"Our suburbs are overflowing with talent and motivation," she says. "But most of France doesn't realize this yet. There is a whole other world on the other side of the Paris beltway." 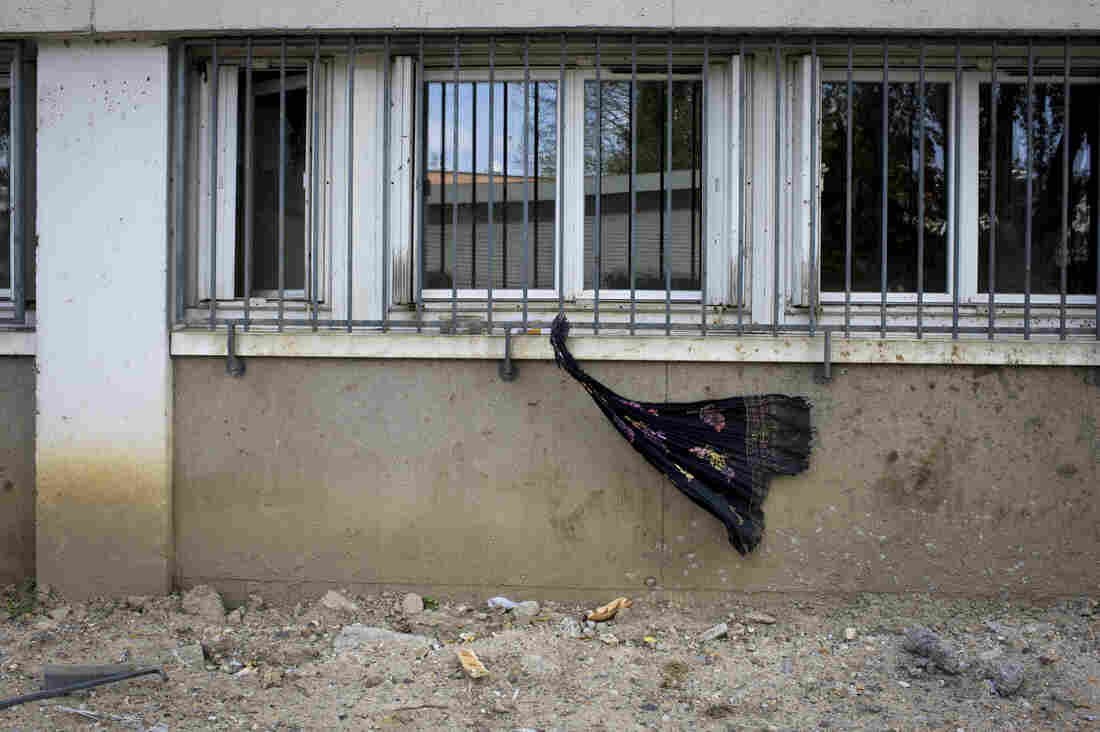 Wind blows a scarf tied to bars on the windows of a housing project in Bondy, France. Old public housing blocks in Bondy are being torn down and replaced by attractive, smaller housing units. Pete Kiehart for NPR hide caption

At a soccer club in the neighboring suburb of Sarcelles, a group of kids sings the Marseillaise along with the TV as France gets ready to play Peru. Mohamed Coulibaly is the athletic director of the soccer club where they're watching the game. More than a thousand kids of all ages play here.

"The French team has many players from the suburbs, so we are very much a part of this national venture," he says.

Coulibaly says kids come from all backgrounds. But they feel completely French. "We're looking at the fifth generation now," he says. "Maybe there were identity issues with the second generation but now they are completely absorbed in this country and proud to be French."

In more recent years, the suburbs have become known as hotbeds for radical extremism. Many of the Paris terrorist attackers grew up in the suburbs.

But Marie-Pauline Mosango doesn't go in for any of that victim narrative. She's originally from The Congo, but moved here as a girl and lives in the suburb of Villiers Le Bel. 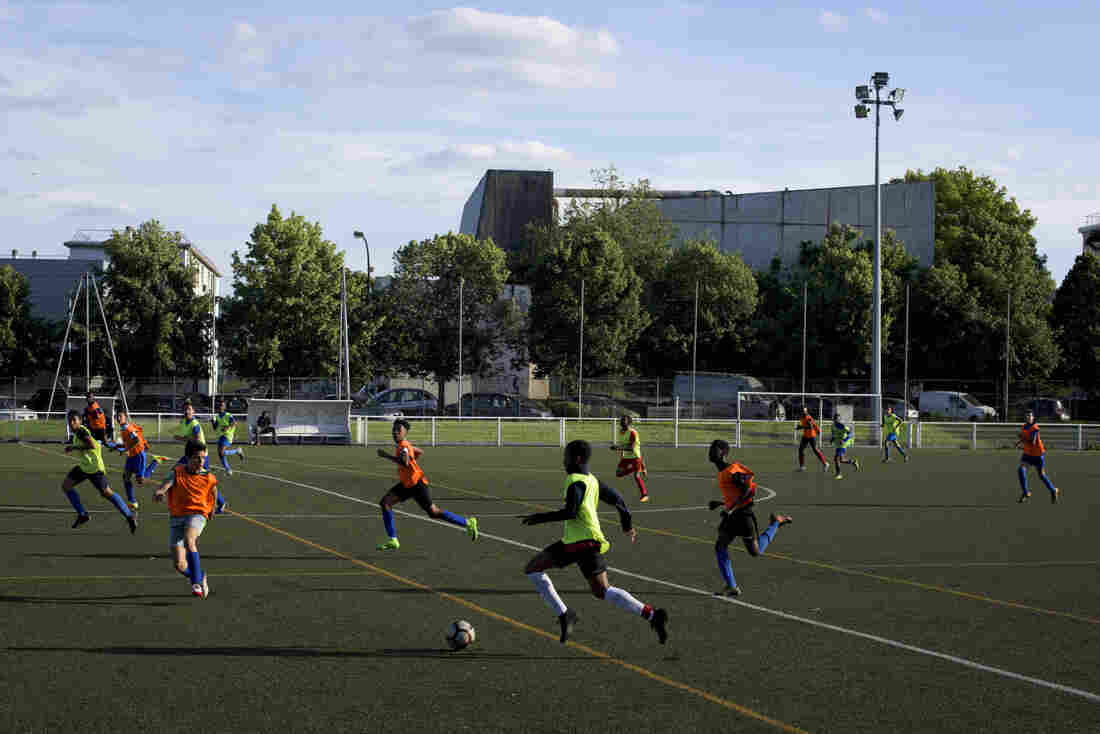 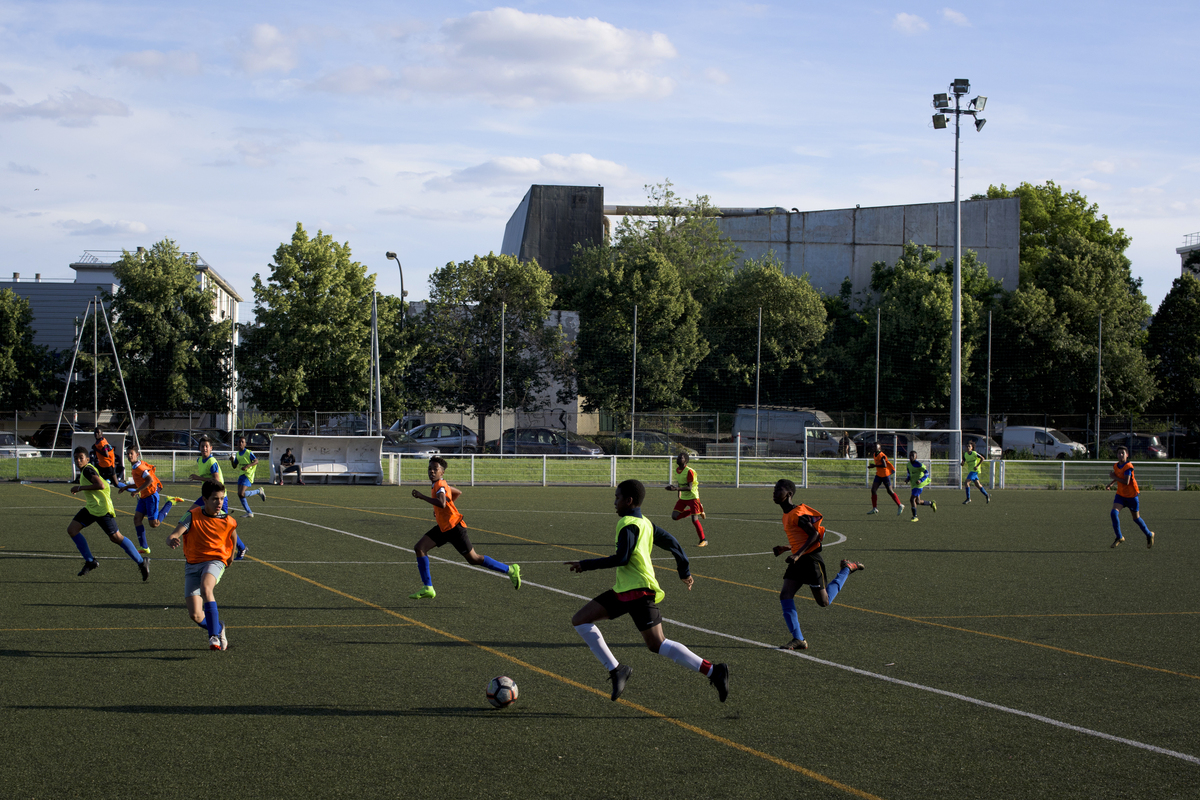 "It's false what they say about the suburbs — that they're isolated and people don't have the same opportunities," she says. "A lot depends on how parents bring up their kids." She should know, she's brought up nine kids.

"One of my sons, who is 19 now, just got his technical baccalaureate and is working as a mechanic," she says. "It wasn't easy, but I was always behind him."

Mosango says she never felt abandoned. "Whenever there were problems with my kids at school someone would call me and there would be a conference and my child would be able to have a school psychiatrist or some kind of help."

The Paris suburbs have drawn the attention of soccer recruiters in recent years and several players from clubs here now play professionally in France and internationally. 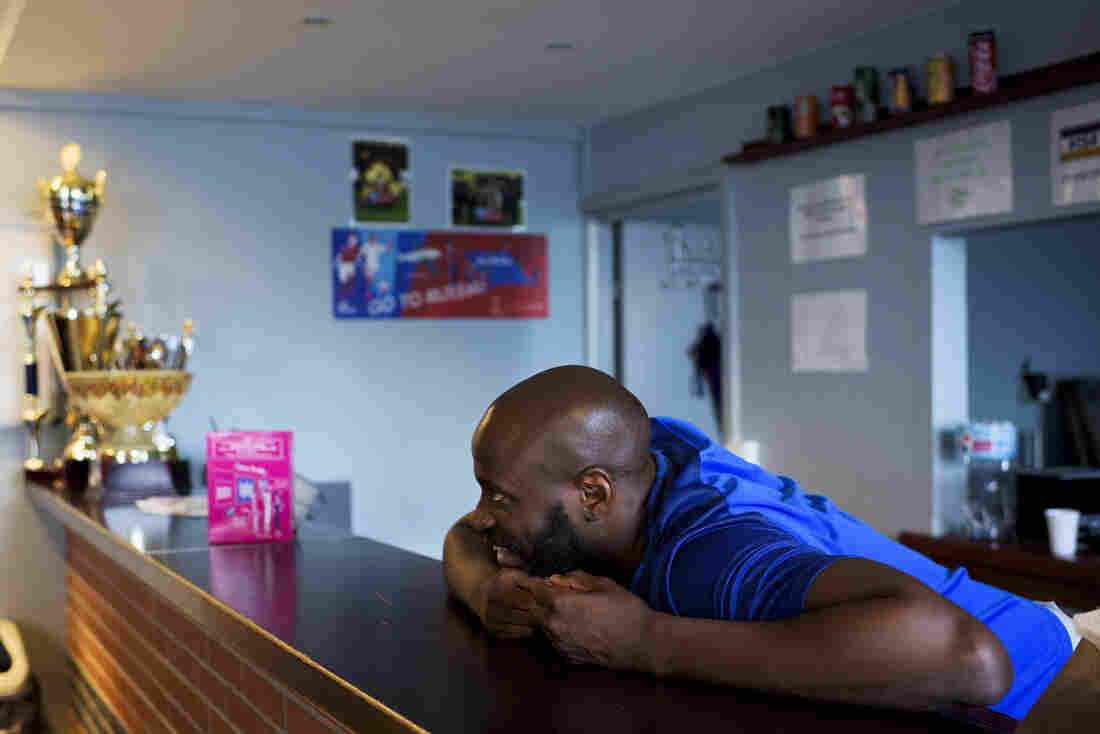 Mohamed Coulibaly, watches France's World Cup match against Peru at the Sarcelles A.A.S. complex on June 21. Coulibaly is the director of the soccer program at the club. Pete Kiehart for NPR hide caption

Mickael Nadé played in the Sarcelles and has gone pro. He plays for French professional team Saint-Etienne. Nadé's parents are from Ivory Coast, but he says he feels very French. "I don't forget my origins, but I'm completely French."

He says Sarcelles and the suburbs around Paris are great. "We accept everyone," he says. "People know that and that's why they come."

Sarcelles is known for its large Muslim and Jewish communities.

James Koumpate has come out to watch his son's team practice at the Sarcelles Soccer Club. 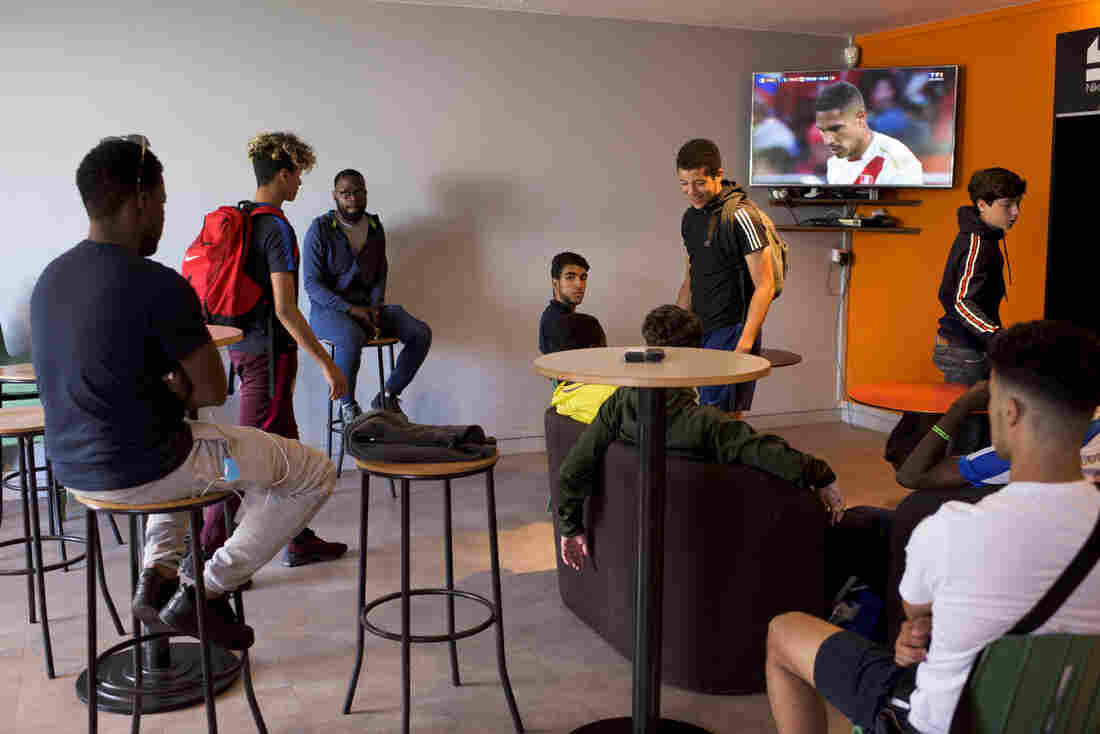 "With soccer there's no question about race or religion," he says. "We all play together. It's always been like that but now everyone is looking because a lot of French players from the suburbs are succeeding internationally."

"It might be a little harder to succeed in the suburbs because people have less," he says. "But there's more energy and sheer will."

Koumpate agrees with the mayor of Bondy that the future of France is playing out here, in its suburbs.