Accessibility links
Saudi Arabia Lifts Ban On Female Drivers The country allowed women to drive for the first time on Sunday. Previously, women in Saudi Arabia depended on chauffeurs and male relatives to travel anywhere via car, even to run simple errands. 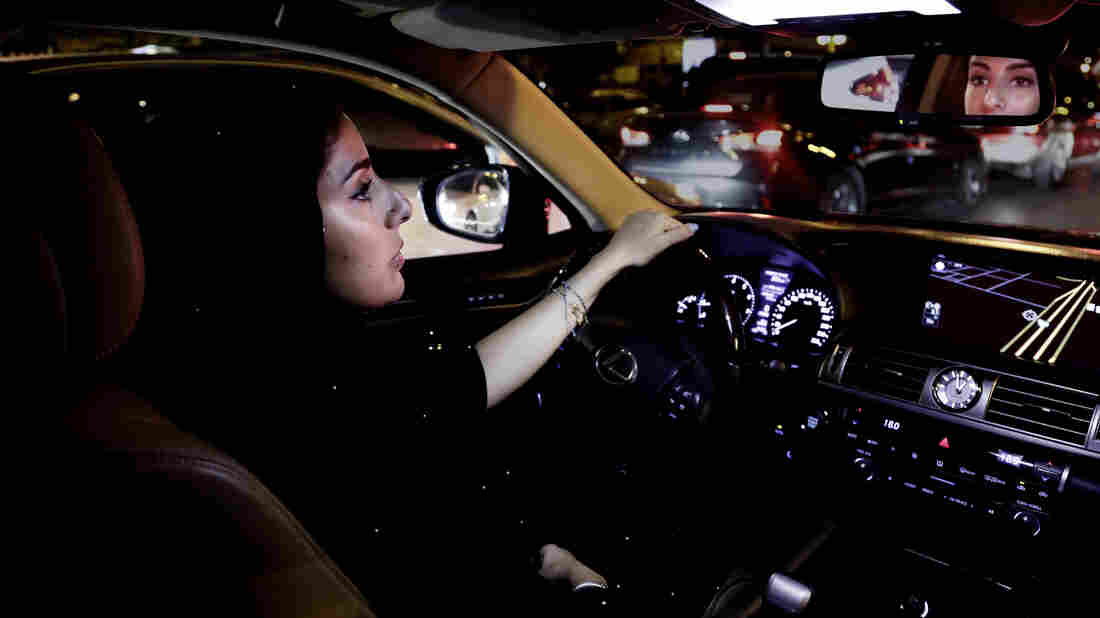 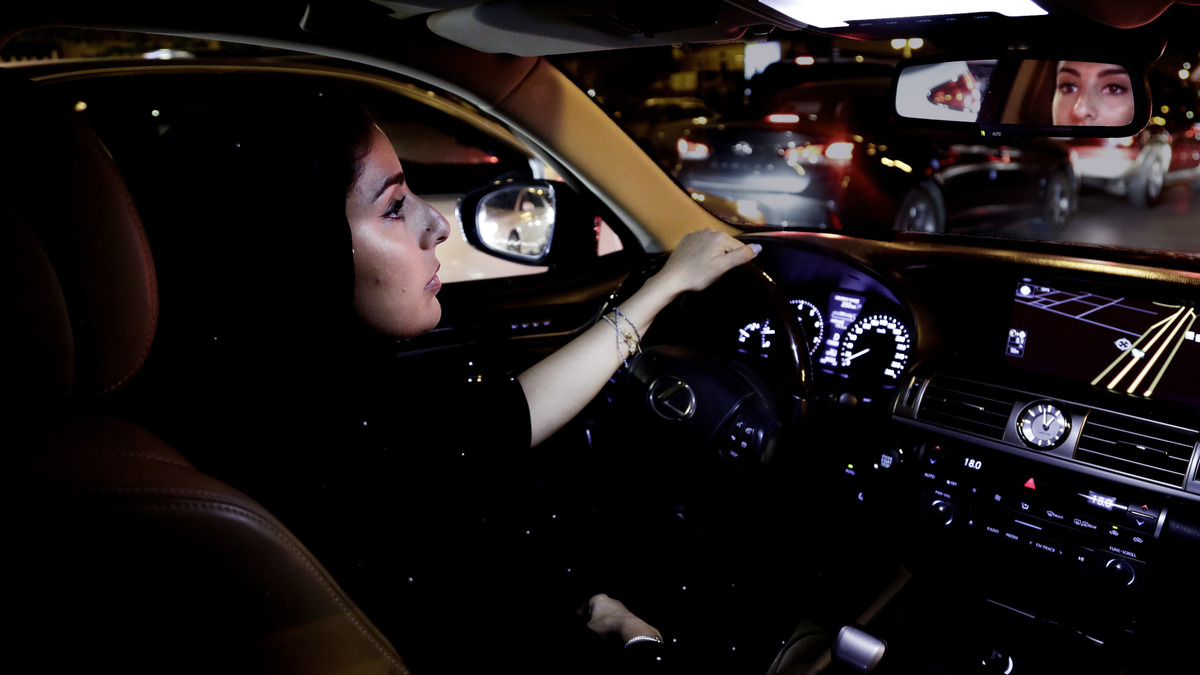 Hessah al-Ajaji drives down the busy Tahlia Street after midnight for the first time in Riyadh, Saudi Arabia, on Sunday.

Saudi Arabia lifted its widely criticized ban on female drivers on Sunday, sparking jubilation among many women in the country who went out on the roads shortly after the ban was lifted.

Talk show host and writer Samar Almogren told The Guardian, "I always knew this day would come. But it came fast. Sudden. I feel free like a bird."

Another driver, Hessah al-Ajaji, told the Associated Press, "I'm speechless. I'm so excited it's actually happening." She said the male drivers on the road early Sunday morning "were really supportive and cheering and smiling."

Female drivers and people throughout Saudi Arabia have been publishing scores of photos and videos to social media following the lifting of the ban. Prince Al-Waleed bin Talal posted a video to Twitter, which said, "Finally, First ride with my daughter @Reem_Alwaleed while she's driving me and my grand daughters in Riyadh."

He had earlier tweeted in November, "Stop the debate. Time for women to drive."

Finally,
First ride with my daughter @Reem_Alwaleed while she’s driving me and my grand daughters in Riyadh#SaudiWomenDriving pic.twitter.com/rXHPUx79fu

Previously, women in Saudi Arabia had to depend on chauffeurs and male relatives to travel anywhere via car, even to run simple errands. According to PricewaterhouseCoopers, more than 3 million women could receive licenses and drive by 2020. There are already long wait lists for women's driving schools that have recently opened in the country.

The lifting of the ban is just one of many changes planned by Saudi Arabia's Crown Prince Mohammed bin Salman, who assumed power one year ago this month. The 32-year-old prince is regarded as a risk-taker, and has begun a sweeping campaign of liberalization in the kingdom, which has been ruled by the House of Saud since 1932.

Saudia Arabia's transformation, including allowing women greater freedoms and equality, may be essential to its economy. Experts say that as the nation shifts away from an economy predominantly reliant on oil, more households will need dual incomes.

Layla Albraikan, a 25-year-old who lives in Riyadh, says she drove a car with her female colleagues on Sunday for the first time in Saudi Arabia. "We experienced two cars thumbing up, honking and cheering. It was very nice."

"If you look at it from a social perspective, the women's driving ban being lifted, is a positive one. And also from a workforce perspective, women are being given more leadership roles," Albraikan says. "Hopefully I'll drive every day to work, and in a couple of months I'll buy my own car."

Prince Mohammed has launched Vision 2030, which he says presents Saudi Arabia's blueprint for the future, and includes plans to reduce the country's dependence on oil, diversify its economy and develop public service sectors such as health, education, and infrastructure. The campaign imagines a future Saudi Arabia that is more open and inclusive to foreign tourists and investors, and domestically, to women's participation in the workforce and economy. Since Prince Mohammed assumed power, Saudi Arabia has already lifted bans on women attending movies and music concerts with men.

Some, like 30-year-old Faisal Mohammed, who lives in Saudia Arabia's Eastern Province, support the prince's bid for transformation. "I am glad to see such progress, empowering women to be more involved in this development ... The opening of the market to foreign investors ... The entertainment and tourism developments ... It's a challenging vision, but as of now, everything seems to be on track," says Mohammed.

Referring to Saudi Arabia's older generations, Mohammed continues, "Some people are more conservative in their views of the changes, and want to see how all of this will unfold. But overall, they seem to welcome change."

Despite the liberalization effort, it remains unclear to what extent the kingdom will become more tolerant of dissent or challenges to the government. In the lead up to the lifting of the driving ban, Saudi Arabia arrested several women's driving activists, and accused them of undermining security. Among those recently detained is 28-year-old Loujain al-Hathloul, who was previously arrested for driving in 2014. That year she was held for more than 70 days. Al-Hathloul was arrested again on May 15. Another prominent activist recently arrested in Saudi Arabia is Aziza al-Yousef, a professor at Riyadh's King Saud University.

The prince's reforms risk sparking dissent within the kingdom. Saudi society has long been dominated by Wahhabism, an ultraconservative form of Sunni Islam. Fearing a backlash ahead of the lifting of the ban on female drivers, Saudi Arabia's government passed a law against sexual harassment, with a penalty of up to five years in prison, and warned men not to stalk women drivers on the road.

Allowing women on the road is part of a transformation in the way women are regarded that could extend beyond Saudi Arabia's borders, according to Saudi Arabia's foreign minister, Adel al-Jubeir. He told The New York Times' Roger Cohen, "When people look at Saudi Arabia, see Mecca and Medina, they want to emulate it. When they see openness and moderation and tolerance and innovation, that's what they want to be." According to Cohen, al-Jubeir said no other country has "that soft power."