Accessibility links
Getting Your Laughs Where You Can In The Wide World Of Stand-Up Pop Culture Happy Hour had so much fun finding stand-up specials to recommend that we figured we'd write it all down so you can find the ones you really want. 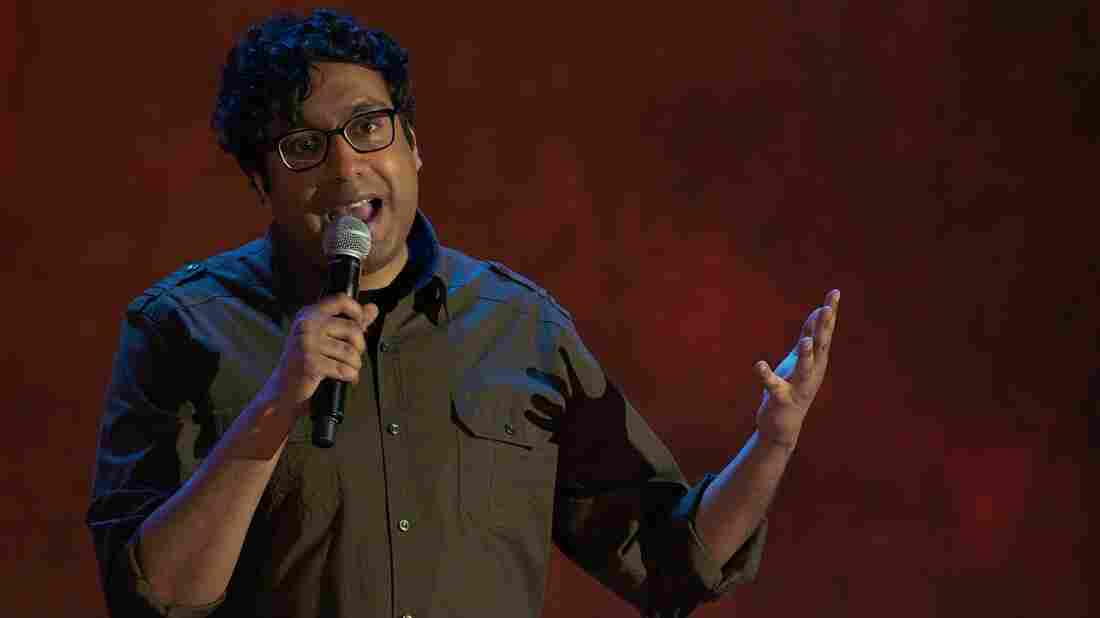 Hari Kondabolu's Netflix special Warn Your Relatives is one of the comedy specials you can find streaming right now. Netflix hide caption 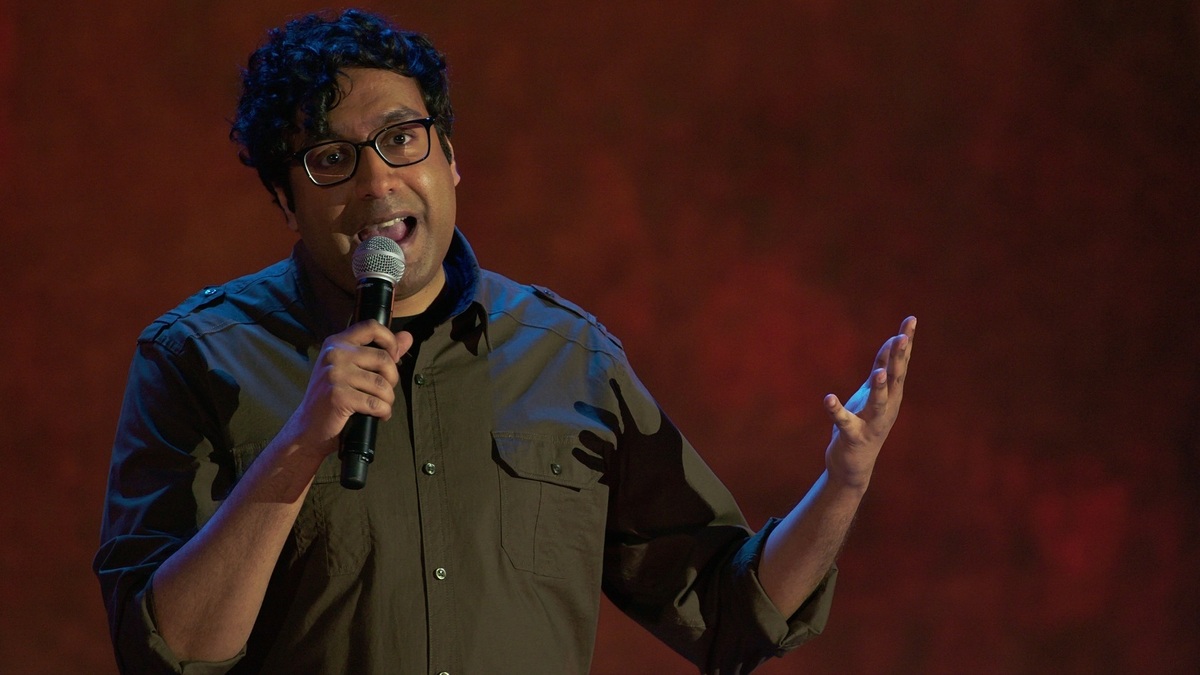 Hari Kondabolu's Netflix special Warn Your Relatives is one of the comedy specials you can find streaming right now.

How's your week going so far?

That well, huh? We understand.

Over on our show, Pop Culture Happy Hour, we recently spent an episode talking all about comedy specials, which play a unique role for us in helping hard times feel a little less taxing. Stephen Thompson of NPR Music, Glen Weldon of the NPR arts desk, Mike Katzif of Ask Me Another and I chose two specials each to highlight from the last couple of years.

For a long time, the primary source of stand-up on television was basic cable, where half-hour specials with comics standing in front of brick walls proliferated. HBO made a mark with hour-long specials, many of which became nearly legendary.

But recently, the heaviest stomping feet in stand-up television have belonged to Netflix, which has spent huge money and landed specials from superstars like Chris Rock and Dave Chappelle, but is also giving opportunities to less famous performers whose biggest problem may be getting their work to stand out among the many (many, many) other Netflix offerings.

So you'll see a lot of Netflix here, and in our special bonus recommendations at the end of the list. But you'll also see HBO, Comedy Central, and even one special that was released independently to raise money.

A note about Nanette: On June 19, after we recorded our episode, Netflix released a recorded version of Hannah Gadsby's Nanette, a show that combines incisive, creative comedy with unsparing storytelling and righteous fury about misogyny, trauma and growing up as a lesbian in Tasmania, where homosexuality was illegal at the time. As the episode dropped, we were asked over and over by listeners to watch Gadsby's special — and I'm glad I did. It is an unforgettable, inventive hour unlike anything I've ever seen. It is comedy, and then it is something else, and then it is comedy again, and then it is something else again. The experimentation in this space continues to be thrilling and hugely valuable.

There's mining awkwardness for laughs, and then there's performing a stand-up routine in front of an audience so small, you can place each individual nervous chuckle. Maria Bamford begins Old Baby by performing alone in front of a mirror, then figuratively pans out to speak to progressively larger crowds: her husband and their pugs, a few people in a bowling alley, and so on, all the way up to about 20 minutes of material in front of a typical theater crowd. An accomplished voice actor, Bamford gets the most out of her distinct cadence, her fearless takes on mental illness and her gift for embodying multiple characters in rapid succession; there's a bit in Old Baby wherein she imitates her mother, her husband's mother, and her husband's imitation of his mother. But she also scores points just for thoroughly upending expectations about what stand-up comedy should entail in the first place. — Stephen Thompson

Thank God For Jokes is a little different from a traditional stand-up special, as Birbiglia is a little different from a traditional stand-up. It's hard to draw meaningful lines between a stand-up and a storyteller, between a comedy special and a one-man show. But Birbiglia distinguishes himself perhaps most clearly by placing a single frame around this entire hour of comedy: his hosting of the Gotham Awards, an independent film awards show. He uses his own memories of deliberating over how to host the event successfully as the bones of an examination of what's funny to different audiences, how to keep people from hating you, what happens when you realize you've done the wrong thing before a live audience, and what it's like to be a broke, rock-bottom comic. The special is a wonder of structure and pacing, circling back and back to the Gotham Awards and back and back to earlier references, so smoothly that everything feels like one conversation — Linda Holmes

Cameron Esposito is stupendously good at using her own voice. Her shout is funny, her whisper is funny, and her conspiratorial, faux-polite, excruciatingly patient explanatory tone is funny. She released her special Rape Jokes on her own site to raise money for RAINN, an organization that fights sexual violence. The special does deal with sexual assault and jokes about sexual assault, as well as the tiresome complaints about "P.C. culture" that she likens to people insisting on calling Netflix "talkies on my Blockbuster machine." But while it's impassioned, the special is never didactic in a way that distracts. Esposito uses the importance of her subject the way comics use mic stands: she leans on it, steps back from it, gestures toward it, stands away from it, and uses it to get laughs, but never lets it get too far away from the center of the stage. — Linda Holmes

The name of Georgio's 2017 stand-up album is Homonegro Superior, and after watching him work the stage with such easy charm and confidence, you have to admit he makes a pretty good case. He's got a great suit, a healthy swagger and more than a touch of righteous indignation that, in other comics, might fuel a practiced, performative rant or six. But Georgio's not one to lose his cool like that – he keeps his indignation at a low simmer, infusing his jokes with a fierceness borne of growing up an African immigrant with a little something extra: "I'm gay as hell," he says, "and I'm great at it." You watch, and nod to yourself, thinking, Yep, that tracks. — Glen Weldon

An activist and comedian known in part for his documentary The Problem With Apu, Hari Kondabolu injects his stand-up material with the righteous indignation you might expect. But he also fills Warn Your Relatives with sturdy, funny, silly, self-deprecating jokes — about everything from the TSA to getting heckled by Tracy Morgan — and injects his material with enormous affection for, among others, his immigrant mother, whose quips and text messages he reads to the audience with infectious appreciation. — Stephen Thompson

It's fair to say that most fans of comedy are familiar with Jerry Seinfeld. (The guy from Bee Movie, right?) But like a lot of other big names (Dave Chappelle, Amy Schumer, Chris Rock and others), Seinfeld has been wooed to Netflix. And there, he had creative carte blanche to do something different. Jerry Before Seinfeld is a hybrid between a live comedy performance and an autobiographical documentary, framed around Seinfeld onstage at the intimate Comic Strip Live — the Manhattan club where he got his start back in 1976. His new material walks us through his life — from his childhood growing up "ON" Long Island to his move "IN" to the city to hustle for club spots. But he also revisits highlights and favorites from his earliest and oldest routines. In between, the special cuts away to montages of photos, home movies, and archival footage of young Seinfeld doing stand-up — all narrated with short interview snippets retelling his life story. While hardly a deep dive into what makes Jerry really tick, it does give a breezy and fun glimpse into Seinfeld's meticulous crafting of jokes and how his comic sensibilities came into focus. — Mike Katzif

The SNL digital short "Wells For Boys" is a small, crystalline masterpiece unlike the bulk of SNL's output – it's so quiet, so gentle, so assured. It lands as hard as it does with some of us (hi!) not just because it distills something we intimately recognize, but because it does so in such a vaguely ethereal, unforced manner. It was written by Julio Torres (with Jeremy Beller), whose stand-up special exudes that same quality of abstract but absolute confidence. His onstage affect is one of coy passivity, but his jokes are deftly constructed time bombs. He'll begin an anecdote and pause, or seem to stammer, and in those brief silences you can feel the audience growing restless, concerned. But then the punchline arrives with an implacable force that's surprising at first, until we realize how expertly we've been played. — Glen Weldon

With her 2016 special, Baby Cobra, Ali Wong became one of the first comedy stars to get her big breakthrough on Netflix and was immediately recognized as one of comedy's most thrilling talents. Then seven months pregnant, Wong unfurled a hilarious and gleefully filthy set about sex, race and how she "trapped" her now-husband (a Harvard business grad) so she could finally lead a life of leisure as a housewife. "I don't want to lean in. I want to LIE DOWN," she famously quipped. Two years and one baby later, Hard Knock Wife finds Wong unleashing great spitting fury about the realities of pregnancy and parenthood. "I tried being a stay-at-home mom for eight weeks," she seethes. "I liked the stay-at-home part." With a masterful knack for rhythmic pacing, Wong tackles a slew of topics, from her difficulties with breastfeeding to the need for paid maternity leave to the balance of work and family and her newfound fame — all deployed with an id-fueled onstage persona driven by impulsive inner thoughts too few acknowledge out loud. And perhaps the greatest joke of all: Despite the bluntly honest details about childbirth that she relishes sharing like they're from a horror movie, Wong is again visibly pregnant — a fact that goes completely, and brilliantly, unspoken. Here's hoping there's another set waiting for us in two years so we can catch up again. — Mike Katzif

BONUS RECOMMENDATIONS FOR EXTRA CREDIT (specials where a place to watch is listed, otherwise albums) (not an exhaustive list — ask us again sometime and we'll tell you a lot more):