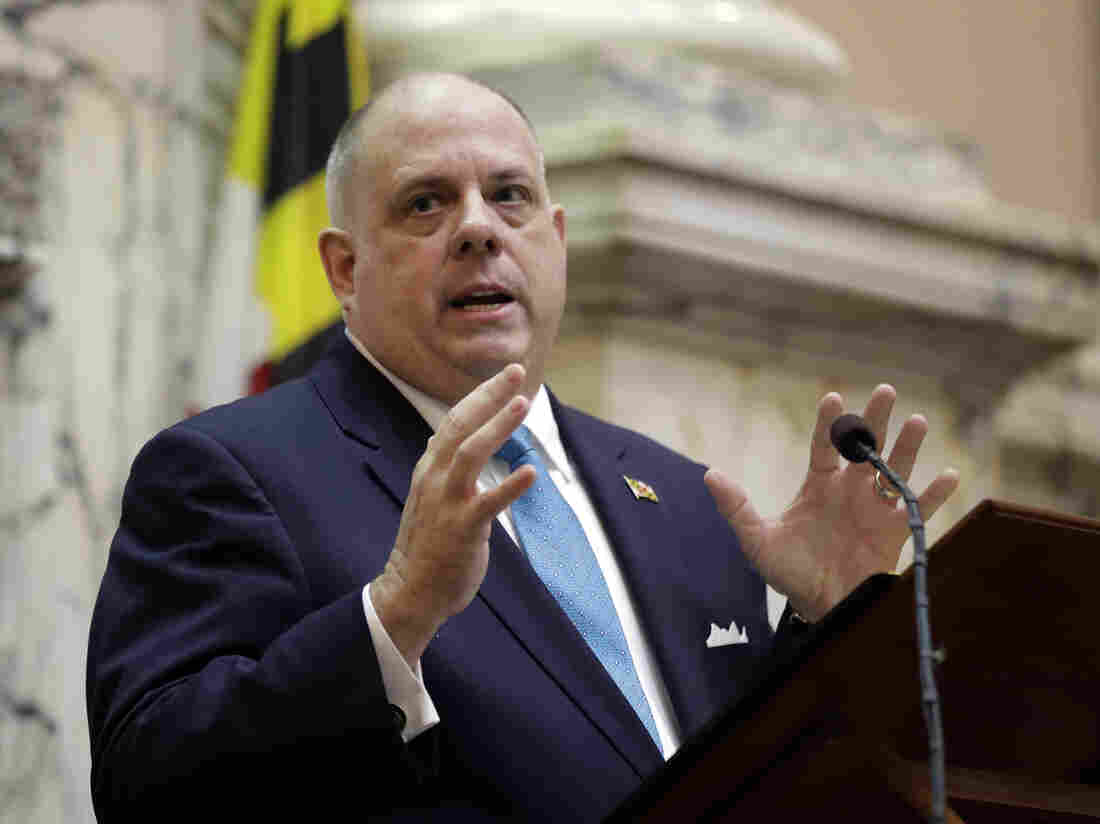 Maryland Gov. Larry Hogan (R) has an approval rating that hovers around 70 percent in a state that Hillary Clinton carried by 25 percentage points in 2016. He faces no challenge in Tuesday's primary. Patrick Semansky/AP hide caption 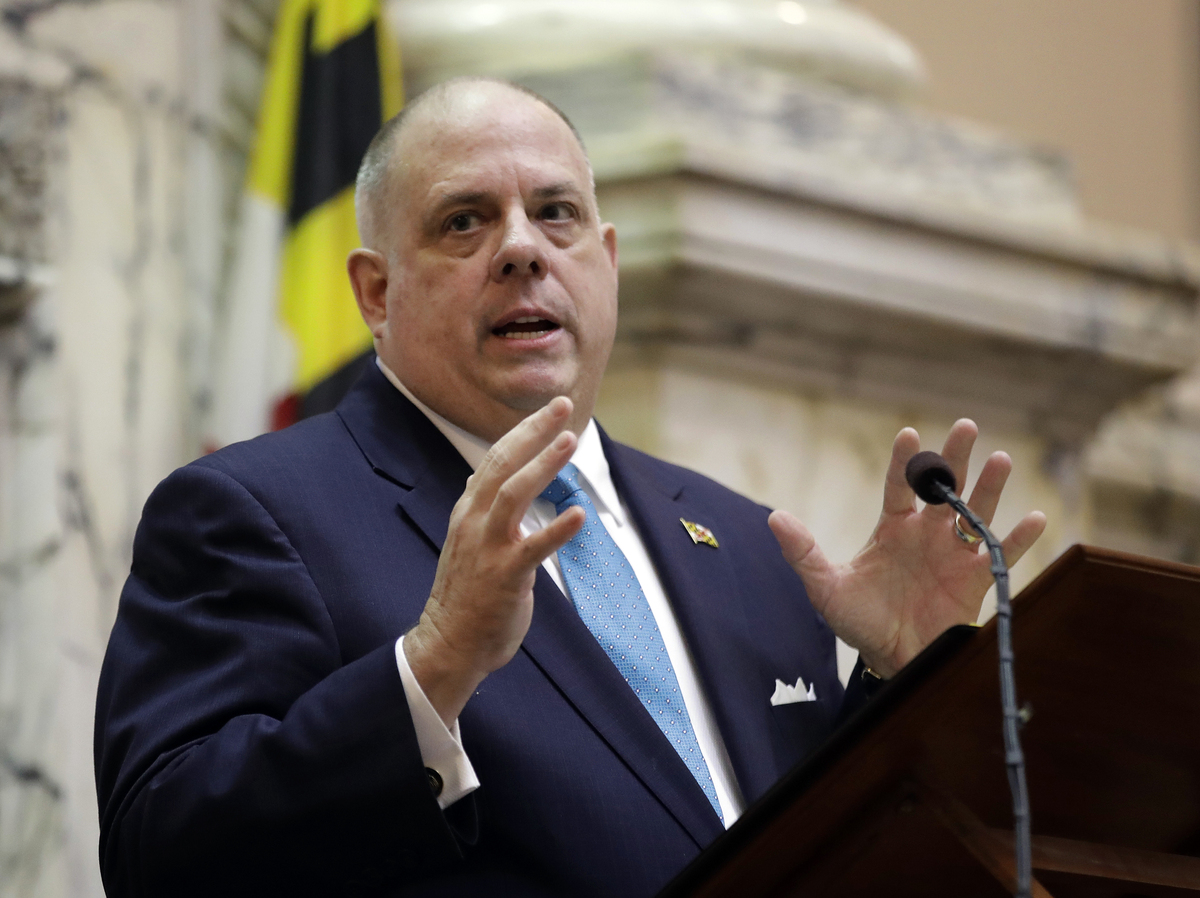 Maryland Gov. Larry Hogan (R) has an approval rating that hovers around 70 percent in a state that Hillary Clinton carried by 25 percentage points in 2016. He faces no challenge in Tuesday's primary.

Four years after his surprise victory, Maryland's Republican governor enjoys sky-high approval ratings in a state where Democrats have a veto-proof majority in the state legislature, control both U.S. Senate seats and all but one of the U.S. Congressional districts.

Registered Democrats also outnumber registered Republicans in the state by a 2-to-1 ratio.

After ticking off a list of accomplishments over the last four years, including cutting taxes and cleaning up the Chesapeake Bay, Hogan reminded a crowd at his reelection campaign kickoff earlier this month in Annapolis of his surprise 2014 election.

"We pulled off the greatest upset victory in the entire United States of America."

Even in this election year, Hogan has shown a willingness to go against the leader of his party, President Donald Trump.

In protest of the thousands of children being split up from their parents, the governor called the state's National Guard troops home from the southern border last week.

Since his election, Hogan has earned praise for being a reassuring presence during the 2015 riots in Baltimore, following the death of Freddie Gray while in police custody. He also endeared himself to many throughout the state as he continued to work while fighting through a diagnosis of non-Hodgkin's lymphoma. The governor says he is now cancer free.

Hogan has also built a strong base of bipartisan support and enjoys an approval rating that hovers around 70 percent.

"Unlike Washington, where nobody gets along and nothing ever seems to get done, here in Maryland we've chosen a different path. And we're setting an example for the rest of the nation," Hogan said at his campaign kickoff, before adding his sales pitch to voters for the fall.

"If we can make all this progress while dealing with riots and battling cancer, just imagine what we're going to get done over the next four years." Hogan is running unopposed in Tuesday's primary.

Hogan's popularity isn't just aligned to his politics, according to Mileah Kromer, Director of the Sarah T. Hughes Field Politics Center at Goucher College in Baltimore.

"He has a personality that people like," Kromer says. "He's gregarious, he comes across as authentic, but he's also one of the most disciplined politicians I've ever come across."

Damon Flemons, a voter in Maryland, says he sees those characteristics in the governor, too.

"I'm a traditional Democrat and I voted Republican," he said at Hogan's reelection campaign launch.

Flemons is the type of voter Democratic Party officials are worried about because he crossed party lines once for Hogan – and plans to again in the fall.

"If we take ourselves out of partisan politics and look at what's best for our state, we'll see that he's the best candidate to do that," Flemons said.

The Democratic primary race for governor has a crowded field of eight candidates, who have relied heavily on their biographies to distinguish themselves from each other. 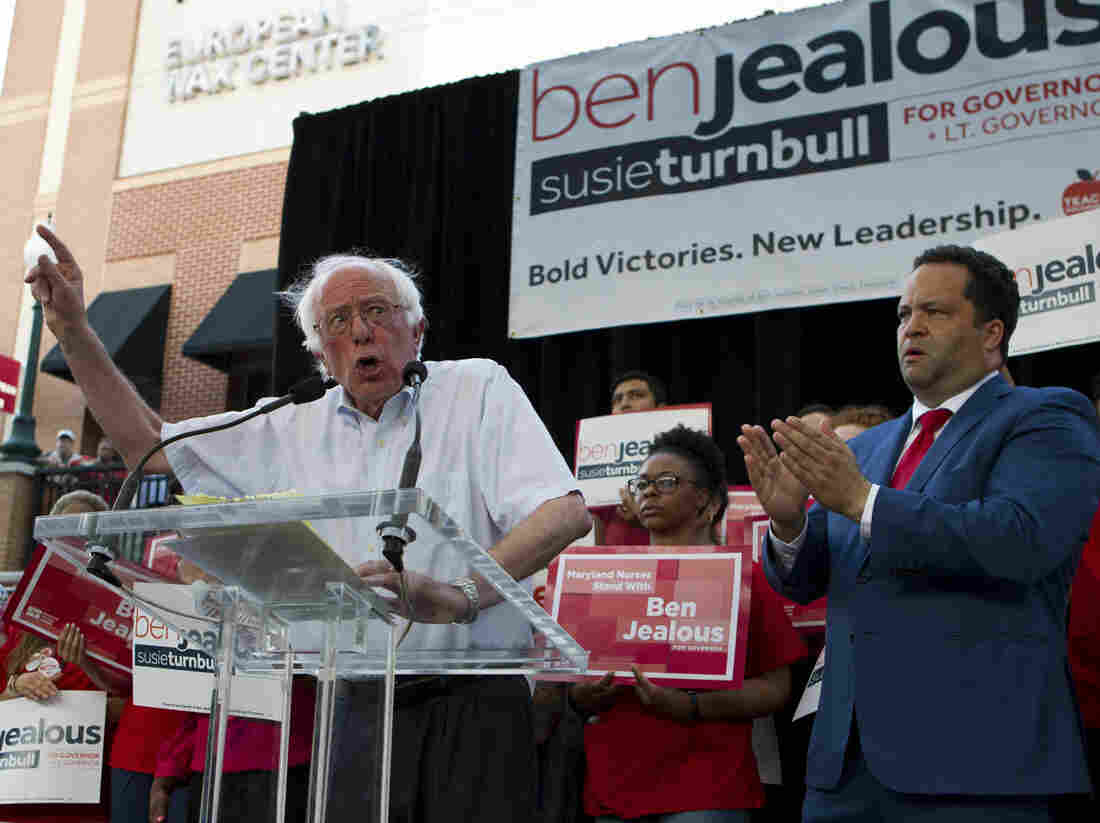 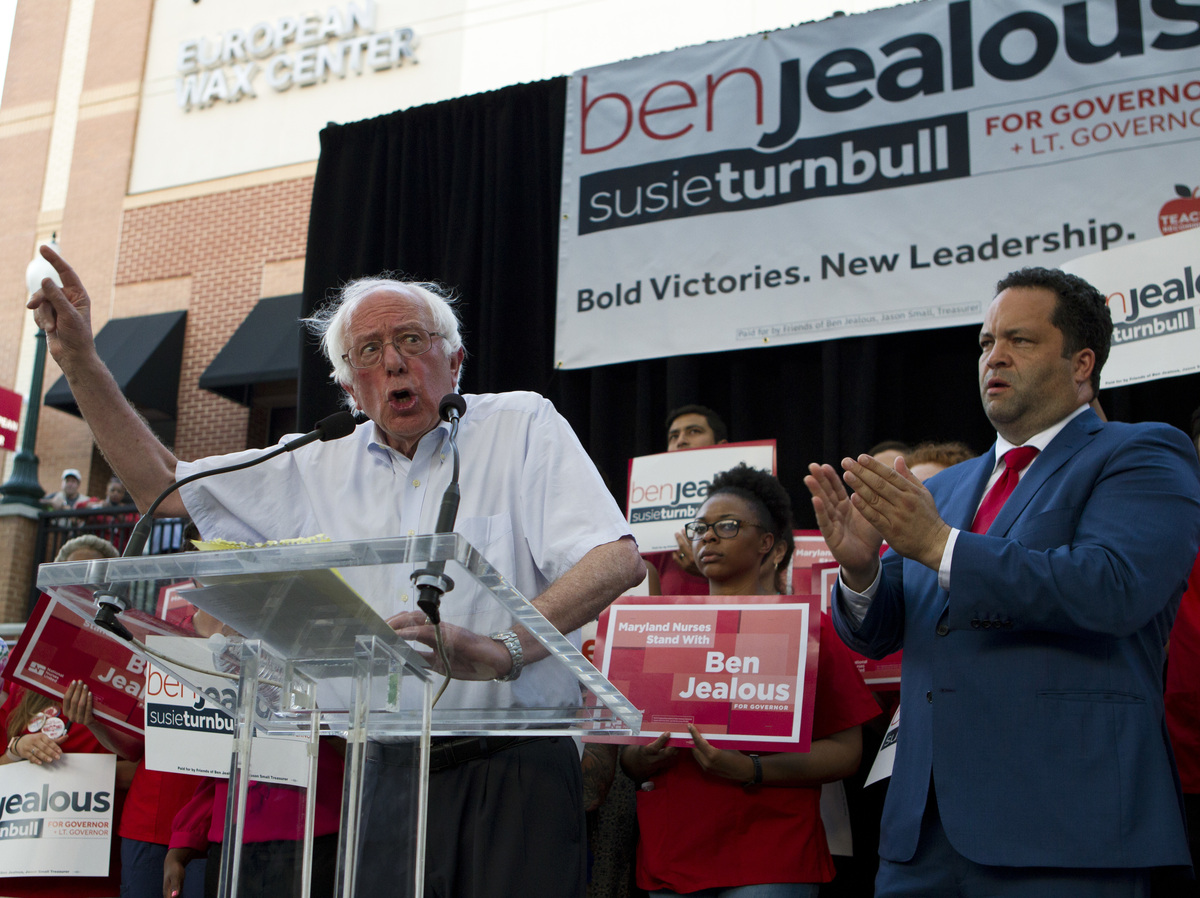 "This is a primary that a lot of folks have contextualized as 'sleepy,' " says Goucher College professor, Mileah Kromer.

"Which is really a shame," she adds, "because the two front-runners for the Maryland gubernatorial primary are African-American men, in a state that has never elected an African-American governor."

Polls heading into primary day indicate it's a two-man race between Rushern Baker, a former state delegate and current top official in Prince George's County, one of the nation's wealthiest majority-black jurisdictions, and Ben Jealous, a first-time candidate and former head of the NAACP, the country's oldest civil rights organization.

Baker has the backing of much of the state's political establishment, including U.S. Sen. Chris Van Hollen, D-Md., and former governor and one-time presidential nominee, Martin O'Malley. 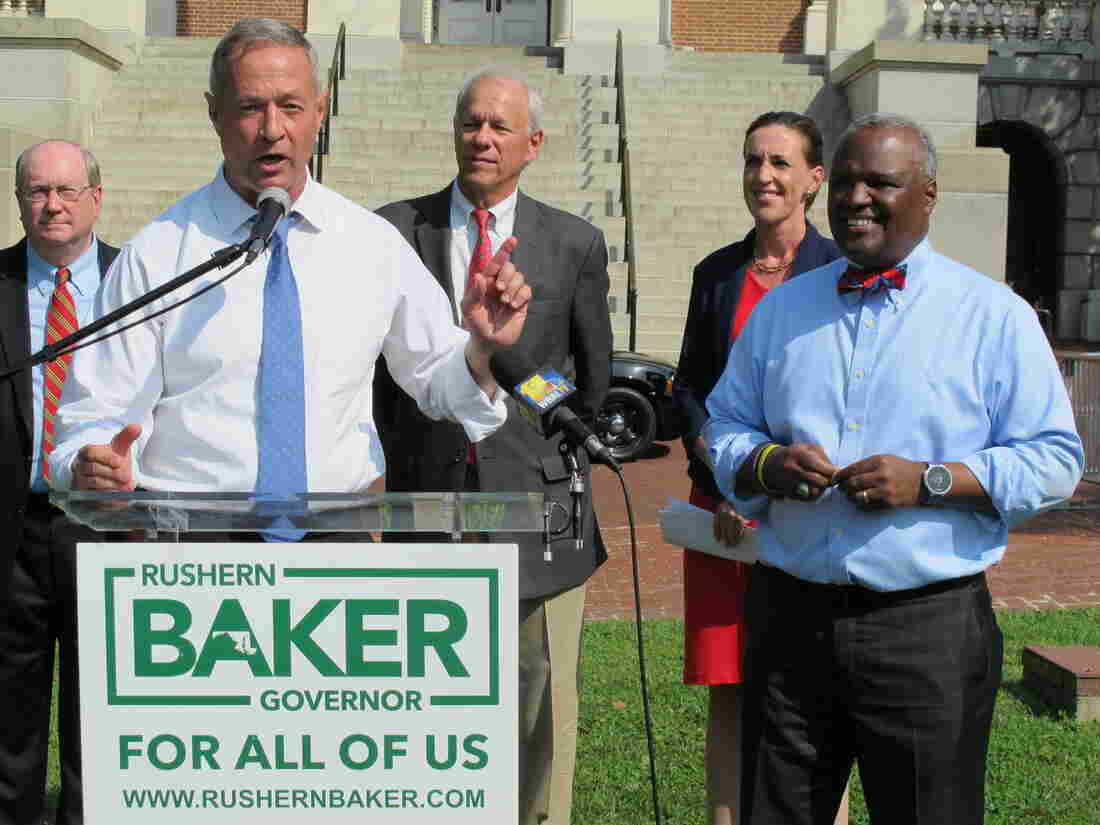 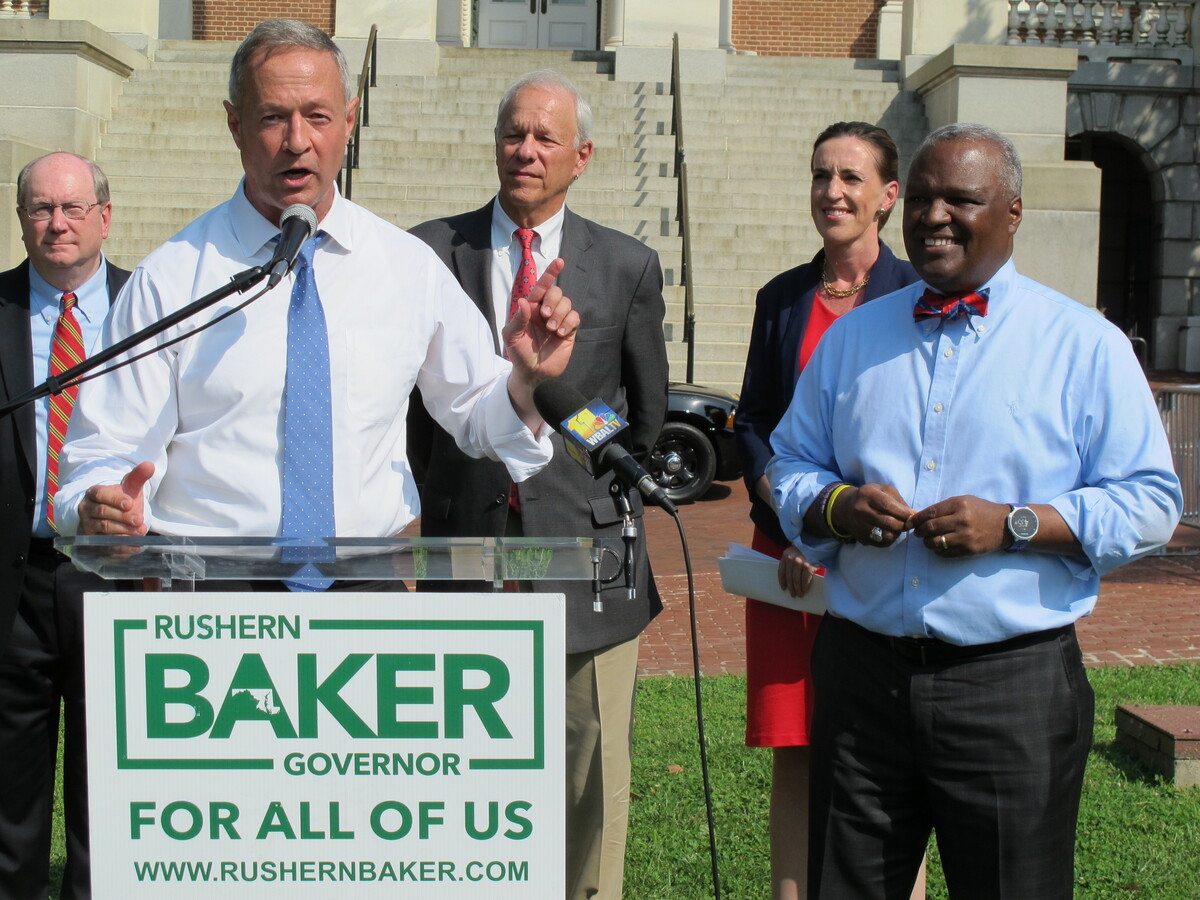 In the closing weeks of the primary campaign, Jealous had big-name progressives stump for him including Sens. Bernie Sanders, I-VT, Cory Booker, D-N.J., and childhood friend and comedian Dave Chappelle.

There is evidence voters may be more engaged as the primary campaign draws to a close. The Baltimore Sun reported that early voting, which ended Thursday, was up 56 percent from the previous gubernatorial primary in 2014. The paper also found before early voting started Jealous and Baker were tied at 16 percent, according to a poll of registered likely voters.

Valerie Ervin, a former Montgomery County, Md. city councilmember, dropped out of the race earlier this month and endorsed Baker.

Ervin was running for lieutenant governor but moved to the top of her ticket after running mate, Baltimore County Executive Kevin Kamenetz, died suddenly in May.