Accessibility links
Divers Search Flooded Cave In Thailand For 12 Missing Boys And Their Soccer Coach They are thought to have entered the sprawling cave complex in Chiang Rai province on Saturday. Despite multiple failed search attempts, authorities remain hopeful they are still alive. 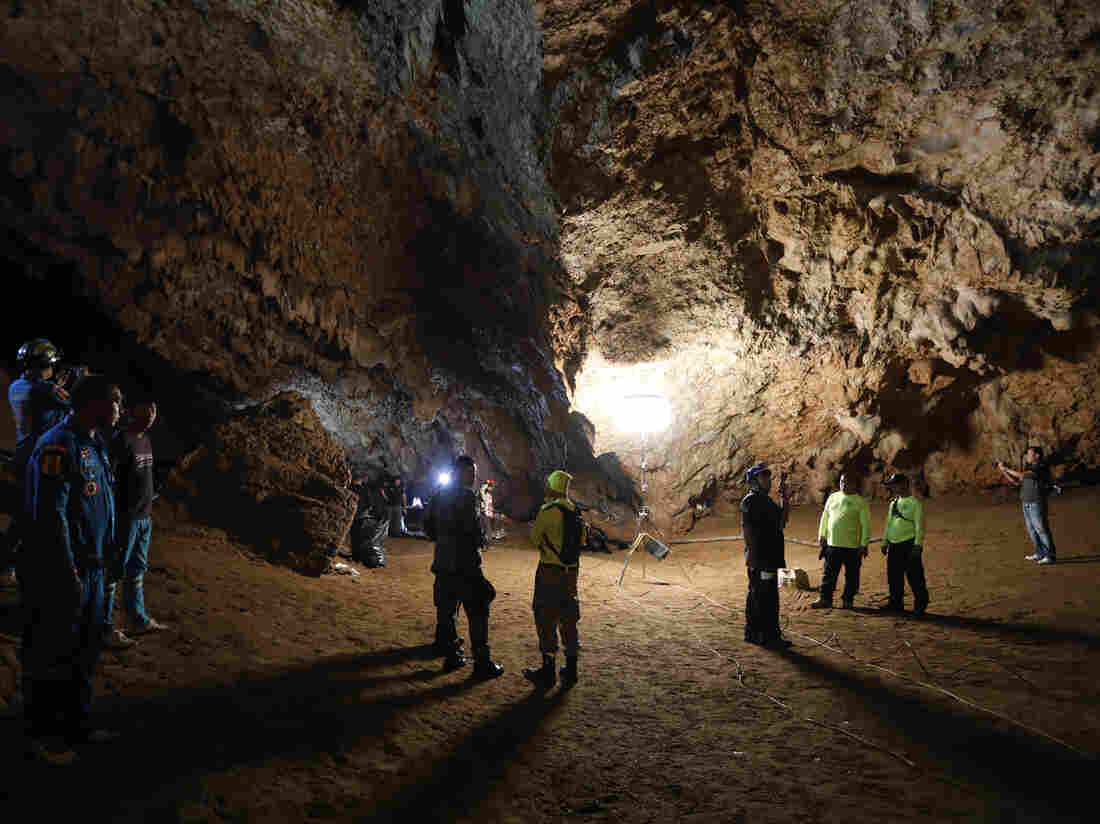 Rescue teams in Thailand gather in a cave where a group of boys and their soccer coach went missing on Saturday afternoon. Despite heavy rains that have obstructed searches, officials believe they are still alive. Krit Promsakla Na Sakolnakorn/AP hide caption 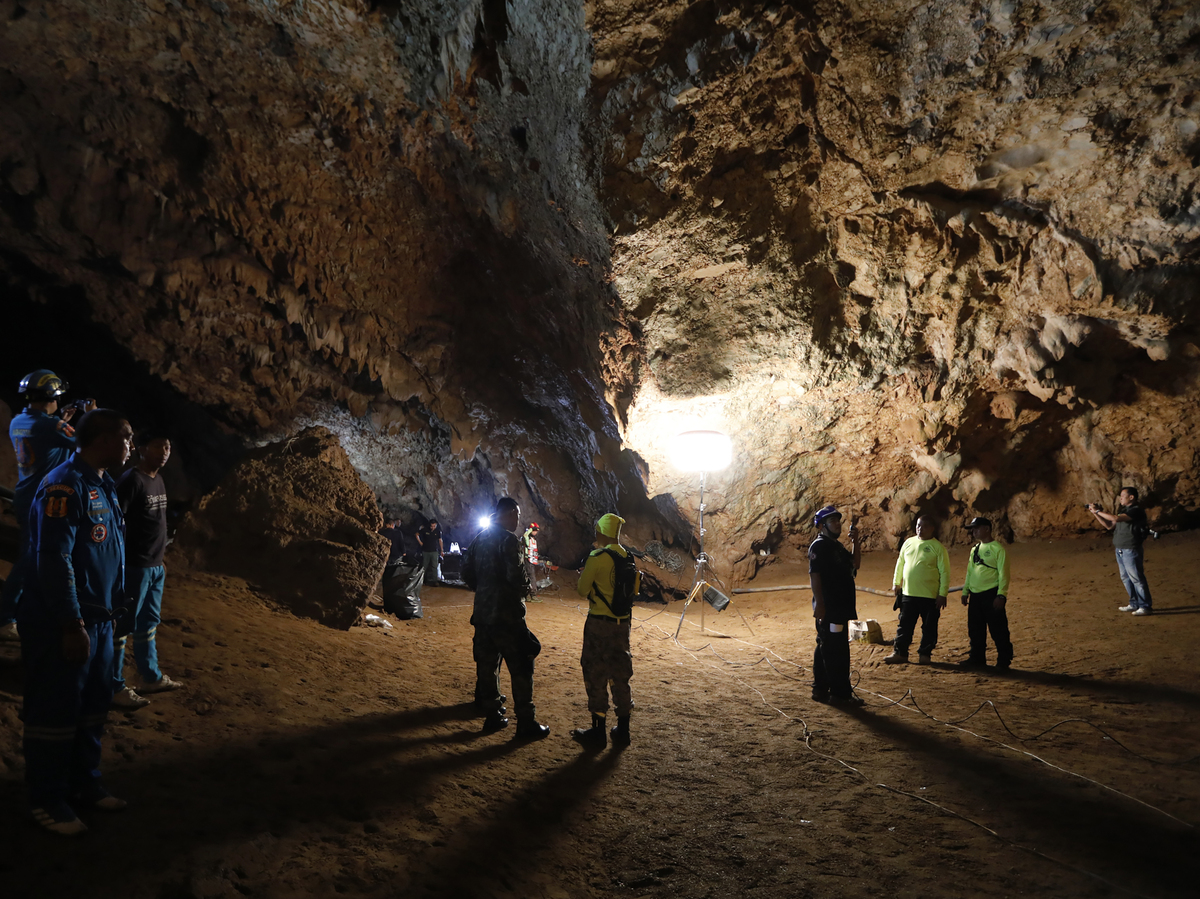 Rescue teams in Thailand gather in a cave where a group of boys and their soccer coach went missing on Saturday afternoon. Despite heavy rains that have obstructed searches, officials believe they are still alive.

Rescue crews have been frantically searching for 12 boys and their soccer coach in a sprawling cave complex in northern Thailand that flooded after heavy rains. Despite two days and numerous setbacks, Thai officials believe they are still alive.

The boys and their coach were thought to have entered the cave complex in Chiang Rai province on Saturday afternoon.

They typically train every weekend on a nearby field. But when one of the boys didn't return from soccer practice that day, his mother notified authorities and the search began, according to media reports.

At the mouth of Tham Luang Nang Non cave, located in a verdant forest reserve that borders Myanmar, park officials found every indication that the boys and coach entered the cave but never came out: a motorcycle, 11 bicycles, backpacks, soccer shoes and sports equipment, The Bangkok Post reported.

Officials confirmed with the head of a local football team that the items belonged to the 25-year-old coach and players, who reportedly range in age from 11 to 16. 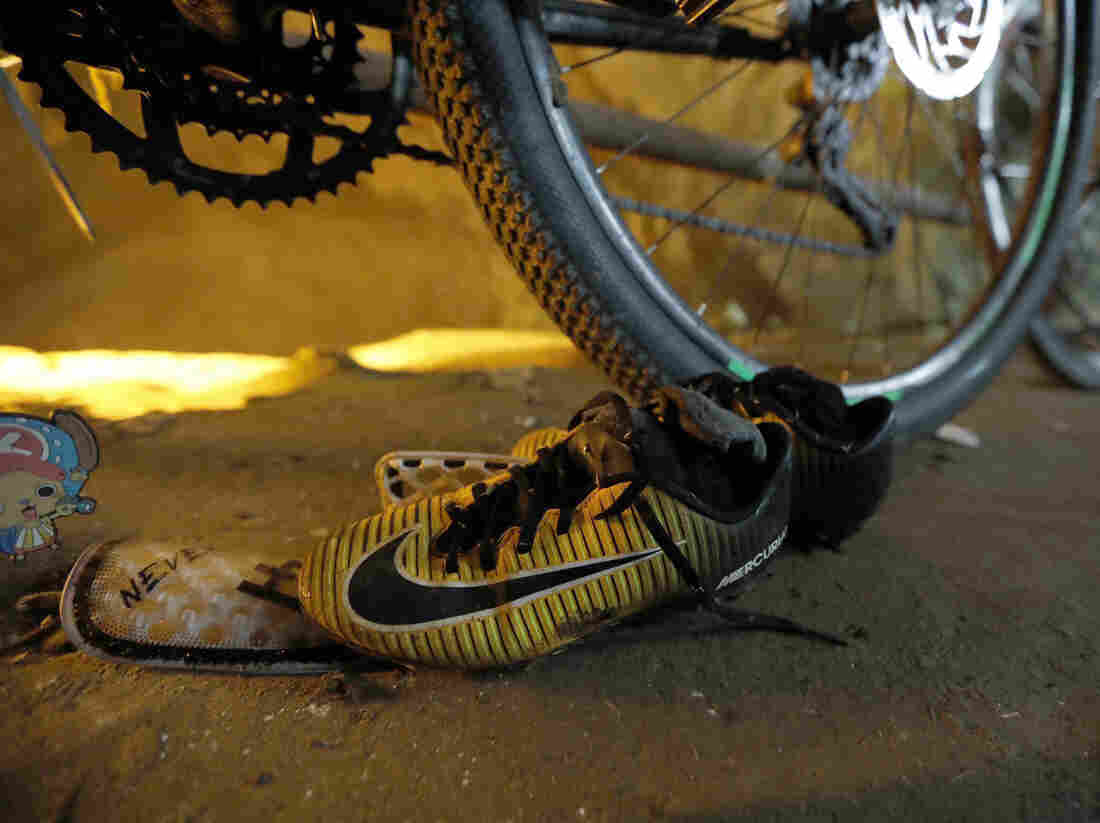 Soccer shoes were found next to bicycles outside the main entrance to the Tham Luang Nang Non cave in Northern Thailand. Thai News Pix via AP hide caption 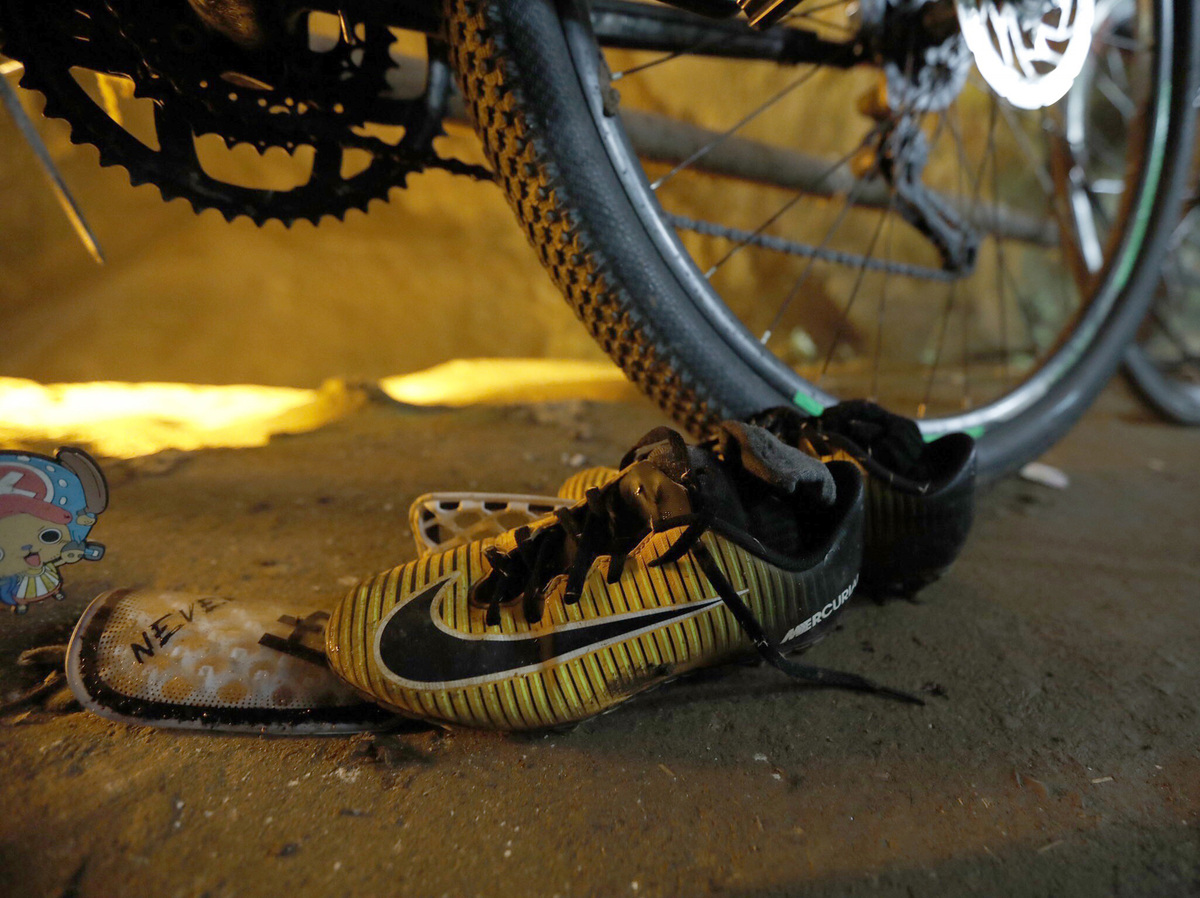 Soccer shoes were found next to bicycles outside the main entrance to the Tham Luang Nang Non cave in Northern Thailand.

"We've found traces but no people yet," Chote Narin, an officer at Mae Sai district police station, said Monday afternoon, was quoted as saying by The Associated Press.

But authorities are holding out hope. Rescuers found footprints and handprints inside the cave, fueling hopes that the boys are still alive, Narin said, according to the AP. He added that their athleticism could help them survive the ordeal.

Heavy rains, rising water levels and darkness in the depths of the cave have prolonged the search for the missing soccer team and coach. Officials are concerned that rainfall could trigger a flash flood inside the Tham Luang cave because a stream winds through portions of the complex.

Park officials previously turned back from a search after heavy rain threatened to block their exit, the Post reported.

Authorities then turned to Royal Thai Navy SEAL divers to enter the complex's deepest chambers, where officials believe the group may be trapped.

Divers entered the cave early Monday morning, swimming in depths of murky water as deep as 16 feet. They tried unsuccessfully to get to a chamber more than 2 miles into the cave, according to the AP.

The navy unit posted on Facebook, as translated by Google: "16.00 Rain drops, the water level in the cave higher. ... But no children."

Sand, mud and flooding prevented the divers from accessing the passage to the chamber, a park official said. The divers' search was suspended in the evening and was expected to resume Tuesday morning.

Helicopters have also been deployed by Border Patrol Police and were searching for other entrances to the cave, according to the Post. A spokesman for the Department of National Parks, Wildlife and Plant Conservation told the newspaper that the cave's only main entrance had been closed to visitors because of the rainy season.

Authorities have also asked nervous villagers to stop burning incense at the entrance of the cave out of concern that it could deplete oxygen inside, The New York Times reported.

The search has dominated Thai airwaves, and even King Maha Vajiralongkorn has followed developments and expressed wishes for the safety of the group.

Kamonchai Kotcha, director of the Office of Conserved Area in Chiang Rai, told Thai PBS that a sign at the cave's entrance warns visitors not to enter without permission from park officials.

In the past, tourists have been rescued from flooded caves after the waters receded days later, officials told media outlets.

If the divers find the boys and coach while the water level remains high, they might need to teach them basic scuba skills to help them escape. Officials have considered piling up sandbags to stop more water from entering the cave and using pumps to lower the water level, Thailand's The Nation reported.

"Right now, our family is hoping that the children trapped inside will have formed a group and are safe and waiting for officials to go in and save them in time," the father of one of the missing boys told local media. "That's what I'm hoping."