Accessibility links
Supreme Court Upholds Trump's Travel Ban By a 5-4 vote, the court reversed a series of lower court decisions and said a rule banning nearly all travelers from five mainly Muslim countries was within the president's authority. 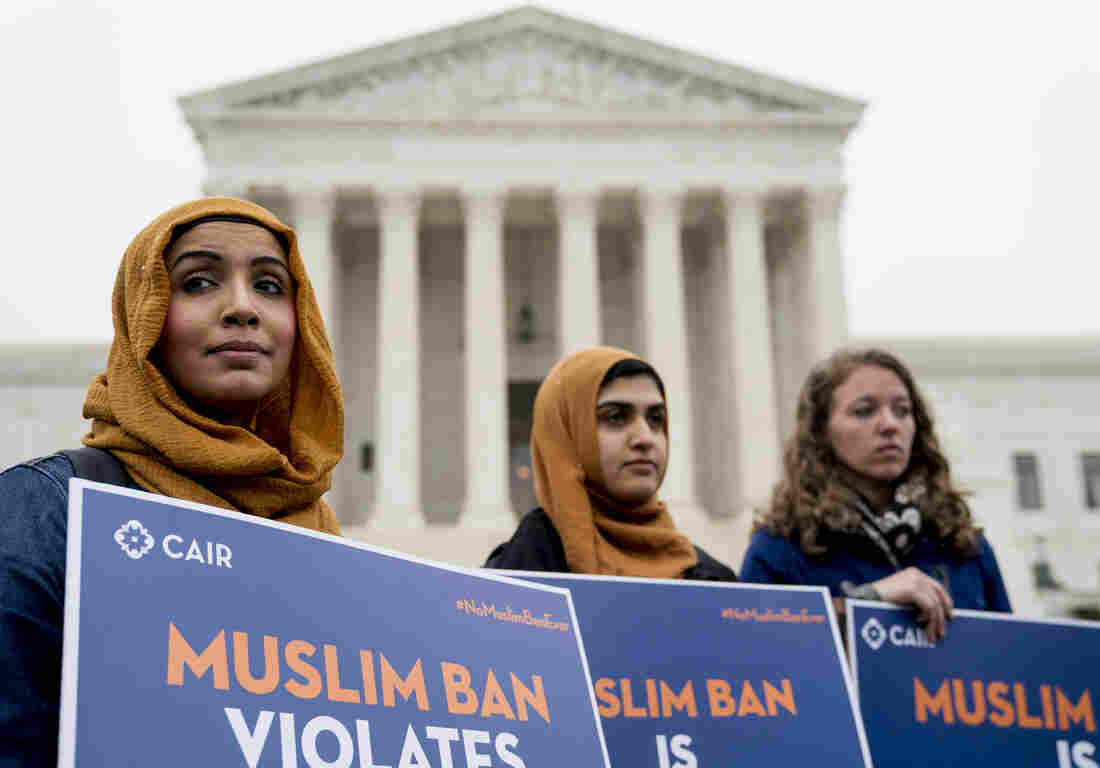 Zainab Chaudry (from left), Zainab Arain and Megan Fair with the Council on American-Islamic Relations stand outside the Supreme Court for a rally against the Trump travel ban before oral arguments. Andrew Harnik/AP hide caption 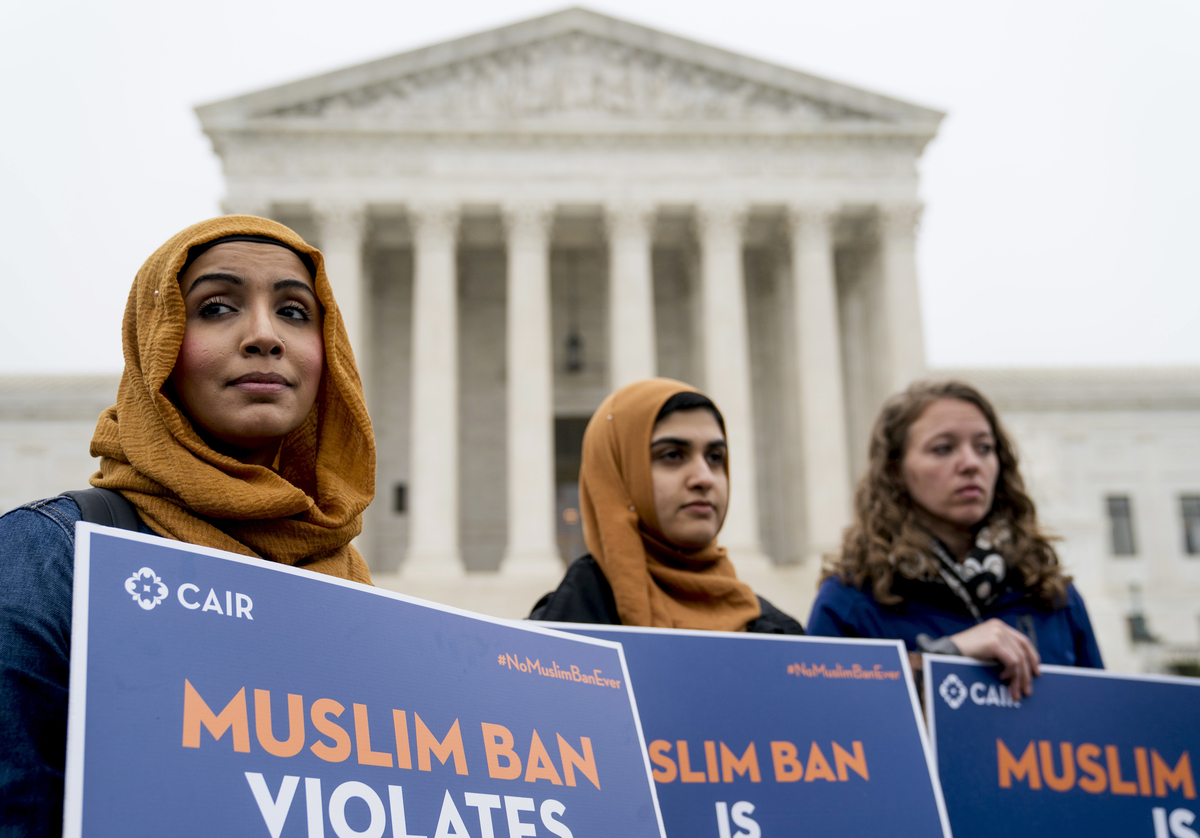 Zainab Chaudry (from left), Zainab Arain and Megan Fair with the Council on American-Islamic Relations stand outside the Supreme Court for a rally against the Trump travel ban before oral arguments.

In a 5-4 ruling that gave broad leeway to presidential authority, the U.S. Supreme Court upheld President Trump's travel ban that barred nearly all travelers from five mainly Muslim countries as well as North Korea and Venezuela.

The president's proclamation was "squarely within the scope of Presidential authority under the INA," the court wrote in its majority opinion, referring to the Immigration and Nationality Act.

"A moment of profound vindication"

"Today's Supreme Court ruling is a tremendous victory for the American People and the Constitution," Trump said in a statement. "The Supreme Court has upheld the clear authority of the President to defend the national security of the United States. In this era of worldwide terrorism and extremist movements bent on harming innocent civilians, we must properly vet those coming into our country.

History will not look kindly on the court's decision today, nor should it.

"This ruling is also a moment of profound vindication following months of hysterical commentary from the media and Democratic politicians who refuse to do what it takes to secure our border and our country. As long as I am President, I will defend the sovereignty, safety, and security of the American People, and fight for an immigration system that serves the national interests of the United States and its citizens. Our country will always be safe, secure and protected on my watch."

In a statement to reporters at the White House, President Trump said, "The ruling shows that all the attacks from the media and the democratic politicians were wrong."

The court seemed to tip its hand at oral arguments in April, when a majority of the justices appeared ready to side with Trump. The court was ruling on what was the third version of the ban, which Trump has complained is a "watered down" version.

The court allowed it to go into effect while the case was being litigated, but the lower courts had ruled that all three versions either violated federal law or were unconstitutional.

Like the earlier two bans, version 3.0 bars almost all travelers from five mainly Muslim countries — Iran, Syria, Yemen, Libya and Somalia — and added a ban on travelers from North Korea and government officials from Venezuela.

The court acceded broadly to presidential power. The majority opinion, written by Chief Justice John Roberts, noted that the INA exudes deference to the president. The executive order, he wrote, was more detailed than similar orders by Presidents Ronald Reagan and Jimmy Carter.

Roberts then deferred to the president's power. The only thing a president has to signal is that entry for people from various countries would be detrimental to the interest of the United States. The president undoubtedly fulfilled that requirement here, the court noted.

The president, Roberts said, has extraordinary power to express his opinions to the country, as well. The plaintiffs argued that Trump's past campaign and other statements about Muslims should be taken into account, but the majority said it is not the court's role to do that.

The chief justice did not dispute Trump's consistently anti-Muslim statements.

"The issue, however, is not whether to denounce the President's statements," Roberts said, "but the significance of those statements in reviewing a Presidential directive, neutral on its face, addressing a matter within the core of executive responsibility. In doing so, the Court must consider not only the statements of a particular President, but also the authority of the Presidency itself."

The upshot of the court's precedents is clear, he said. The court should not inhibit the president's flexibility in responding to changing world conditions, and any court inquiry into matters of into national security is highly constrained. As long as the president presents an explanation for the travel ban that is "plausibly related" to a legitimate national security objective, Roberts said, he is on firm constitutional ground.

Lipstick on a pig

Among national security experts across the political spectrum, the decision elicited distinct disappointment. John Bellinger, who served in a variety of national security positions in the George W. Bush administration after Sept. 11, called Tuesday's decision "unfortunate," but not surprising.

"It's still a pig," he said of the travel ban's current iteration, "but the administration has put just enough lipstick on it for it to look pretty for five of the nine justices."

And University of Chicago constitutional law scholar Aziz Huq said that because there was evidence in this case of a presidential bias against a single religious group, Tuesday's decision is different from court precedent.

"This is one of the very few instances in which there, in fact, was available evidence of bias," he said. "The decision today is one of the first in which it was open and notorious that the policy was launched on the basis of bias."

Because of that, he called the court's decision to uphold Trump's policy "a real shift in the law."

"The United States of America is a Nation built upon the promise of religious liberty," she opened in her dissent. "Our Founders honored that core promise by embedding the principle of religious neutrality in the First Amendment. The Court's decision today fails to safeguard that fundamental principle."

What's more, Sotomayor said, the court's decision "leaves undisturbed a policy first advertised openly and unequivocally as a 'total and complete shutdown of Muslims entering the United States' because the policy now masquerades behind a façade of national-security concerns."

Comparing Tuesday's outcome with the court's decision, in 1944, to uphold the legality of Japanese-American internment camps, Sotomayor noted, "In holding that the First Amendment gives way to an executive policy that a reasonable observer would view as motivated by animus against Muslims, the majority opinion upends this Court's precedent, repeats tragic mistakes of the past, and denies countless individuals the fundamental right of religious liberty."

She added that plaintiffs did have a case related to the Establishment Clause of the Constitution and blasted the majority for believing otherwise.

"The majority holds otherwise by ignoring the facts, misconstruing our legal precedent, and turning a blind eye to the pain and suffering the Proclamation inflicts upon countless families and individuals, many of whom are United States citizens," Sotomayor added.

And while the court has a duty to be deferential to the president, she said, "Deference is different from unquestioning acceptance. Thus, what is 'far more problematic' in this case is the majority's apparent willingness to throw the Establishment Clause out the window and forgo any meaningful constitutional review at the mere mention of a national-security concern."

She then read a selection of anti-Muslim statements made by the president, admonishing the audience to "take a brief moment to let that sink in."

After reading her decision from the bench, she added, "History will not look kindly on the court's decision today — nor should it."

Reactions from both sides

Outside reaction to the ruling was swift.

David Cole, national legal director of the ACLU, called the decision "One of the court's historic failures to live up to its obligation to defend the rights of the most vulnerable from those that are the most powerful."

House Democratic leader Nancy Pelosi slammed the decision in a statement, saying, "The court failed today, and so the public is needed more than ever" to challenge officials who do not move to rescind the ban.

Pelosi added that the ban will actually backfire and serve as a "recruiting tool" for terrorists and invoked other recent controversial foreign policy moves by Trump.

"The President's disdain for our values and the safety of the American people has led him to undermine relationships with critical allies, embrace autocrats and dictators, launch damaging trade wars and sow fear in our communities with his hateful, ugly language," she said. "Whether tearing children from their parents at the border or advancing a ban founded on open bigotry, President Trump is making our nation less safe at home and less respected abroad."

Attorney General Jeff Sessions disagreed. "Today is a great victory for the safety and security of all Americans," he said in a statement. "Today's decision is critical to ensuring the continued authority of President Trump — and all future presidents — to protect the American people. We will continue to take and defend all lawful steps necessary to protect this great nation."

There are some puzzling aspects of the court's opinions. Most notably, Justice Anthony Kennedy filed one-and-a-half page concurring opinion. While Kennedy was the decisive fifth vote in Roberts's majority opinion, he wrote separately that there are numerous government actions that the judiciary cannot correct, but, in his view that does not mean that officials are free to disregard the Constitution and the rights it protects - including freedom of belief and expression. "An anxious world," he wrote, "must know that our Government remains committed always to the liberties the Constitution seeks to preserve and protect, so that freedom extends outward, and lasts."

The message of this concurrence remains unclear. Is it a warning to the Trump administration not to go too far? Or a Hamlet-like lament?