Accessibility links
Customs And Border Agency Halts Many 'Zero Tolerance' Detentions, Citing Workload "A much better system would be to keep families together through their immigration proceedings," Commissioner Kevin McAleenan said. "That's what the Obama administration did in 2014." 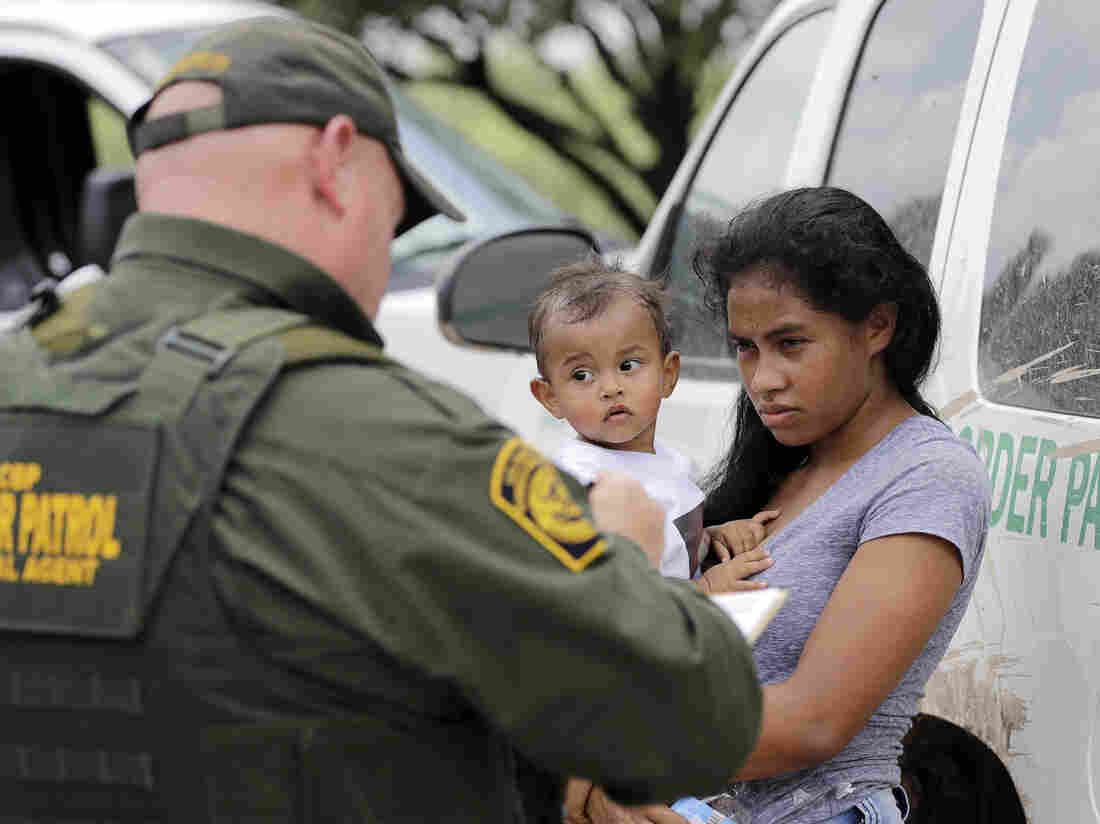 President Trump's zero tolerance policy left the CBP struggling to process the number of people it detained — and the agency says it will temporarily stop turning immigrant parents over to prosecutors. Here, a mother migrating from Honduras holds her 1-year-old child as she surrenders to border agents on Monday. The two had illegally crossed the border near McAllen, Texas. David J. Phillip/AP hide caption 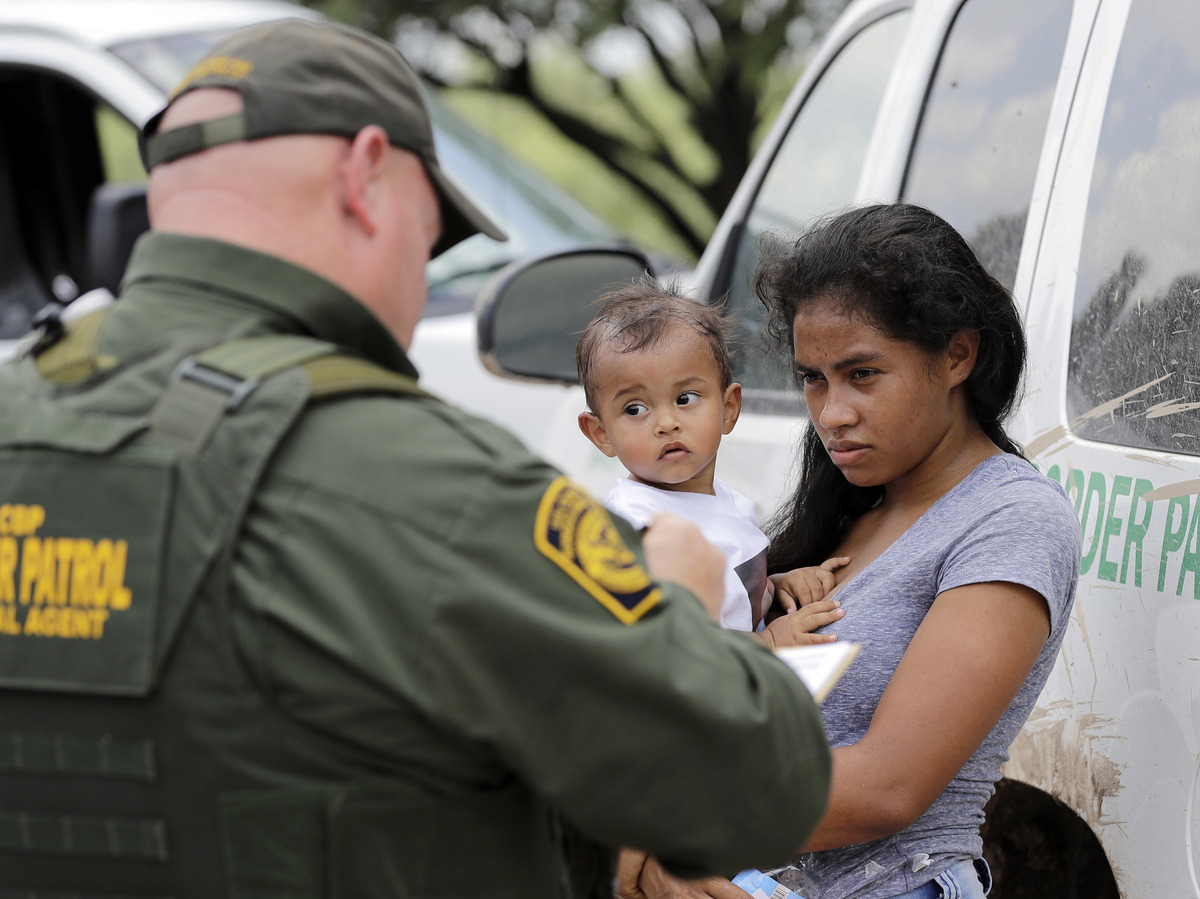 President Trump's zero tolerance policy left the CBP struggling to process the number of people it detained — and the agency says it will temporarily stop turning immigrant parents over to prosecutors. Here, a mother migrating from Honduras holds her 1-year-old child as she surrenders to border agents on Monday. The two had illegally crossed the border near McAllen, Texas.

Despite pressure from President Trump for the U.S. to arrest and prosecute anyone caught crossing the border illegally, U.S. Customs and Border Protection says its agents will temporarily suspend the practice of detaining adults who arrive with children — something that had been a tenet of Trump's "zero tolerance" policy.

Pentagon To House Migrants At 2 Military Bases In Texas

CBP agents will no longer refer migrant parents and children for prosecution when they're caught at the U.S. southern border, Commissioner Kevin McAleenan said, telling reporters that the system — which was widely criticized for separating families, until Trump eased his policy somewhat last week — hasn't worked out.

"A much better system would be to keep families together through their immigration proceedings," McAleenan said. "That's what the Obama administration did in 2014. That's what the president has asked Congress to help us do now."

The Trump policy was billed as a deterrent — using federal agents to draw a line at the border and stop illegal immigration. Instead, it spurred outrage over images and sounds of children who were forcibly taken from their parents. It also put new logistical and record-keeping burdens on the government, which is working to reunite families whose members are being held hundreds of miles away from each other.

The zero tolerance policy left the CBP struggling to process the number of people it was detaining, while still fulfilling its core mission of securing the border.

"It's a huge challenge operationally for our agents," McAleenan said.

Citing a background briefing from a CBP official, NPR's John Burnett reports that the agency's holding facilities are now overwhelmed: "Kids are waiting in cage-like holding cells, while their moms and dads go to court in shackles."

Detained in cavernous buildings and temporary camps, parents and their kids have languished through separations that in some cases have already lasted a month or more — exceeding the 20-day limit on holding children in federal custody. That limit is part of a decades-old settlement called the Flores agreement.

Appearing before a Senate panel Tuesday, Health and Human Services Secretary Alex Azar said his department currently has 2,047 children in its care, and that hundreds have been reunited with a parent. He testified that some of the children are infants.

Sen. Ron Wyden, D-Ore., the ranking member of the Senate Finance Committee, told Azar that "an administration that has traumatized thousands of child refugees, dehumanized these kids and their parents, and tried to normalize this behavior through deception has a lot to answer for."

Azar said HHS was trying to ensure that parents had access to their child via telephone or Skype within 24 hours of being separated. He repeatedly said he was hampered by the 20-day limit on holding migrant children in detention, and called on Congress to act.

Several immigration experts say the government could speed up the reunion process by adding more judges to the immigration system. But Trump disagrees, saying on Monday, "I don't want judges. I want ICE and Border Patrol agents."

Theresa Cardinal Brown of the Bipartisan Policy Center — who also worked on immigration policy under Presidents Barack Obama and George W. Bush — tells NPR's Morning Edition that even before Trump took office, the U.S. was already struggling to deal with the number of immigration and asylum cases.

In April, the Justice Department said that nearly 700,000 cases were pending in immigration courts — a rise from 519,000 cases in 2016. The figure has steadily risen over at least the past decade.

"The backlog started in the Bush administration, but it really accelerated under Obama, because of the Central Americans arriving," Brown said. "Most Mexicans can be deported pretty immediately; Central Americans, again, often have due process — that created the backlog. The president saying he just wants to do away with the courts, you know, obviously [he] can't do that without Congress."

Brown says that while enforcement efforts developed a large security apparatus along the border, there was no correlating growth in the legal and justice system there.

"That's resulted in this backlog that takes two years," Brown said. "If we were to add more judges, reduce that backlog to a couple months — that would probably help with the problem the president is trying to address."

On Monday, Ashley Tabaddor, president of the National Association of Immigration Judges, told NPR that immigration courts' budgets have not increased along with those of law enforcement agencies:

"So we've seen a situation where, if you imagine a one-lane highway with one exit ramp being now built out to a three- or four-lane highway, and the exit ramp remains a single lane — and then trying to blame the exit ramp for the traffic."

For now, the border agency is one of many parts of the Trump administration that is calling on the Republican-controlled Congress to solve the problem, by passing a comprehensive immigration law.

When NPR asked CBP for clarification of its new approach to Trump's policy on Tuesday, the agency sent this statement from Andrew Meehan, assistant commissioner of public affairs:

"U.S. Customs and Border Protection is working through implementing the President's Executive Order in conjunction with the Department of Justice and is taking temporary action until Congress can find a lasting solution to family separation and we encourage them to act."