Accessibility links
Senior FBI Agent Who Criticized Trump Appears In Congress Amid GOP Onslaught Peter Strzok went behind closed doors with the House Judiciary Committee following months of criticism of the politically charged text messages he exchanged with another FBI official in 2016. 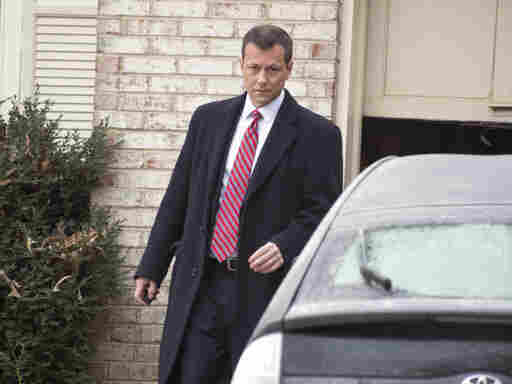 Senior FBI Agent Peter Strzok outside his home in Fairfax, Va., in January. Strzok is scheduled to appear before the House Judiciary Committee on Wednesday to discuss text messages sent during the 2016 presidential campaign. Ron Sachs/picture-alliance/DPA/AP hide caption

A senior FBI investigator whose personal opposition to Donald Trump has become a huge public embarrassment for the Justice Department made a marathon visit to Congress on Wednesday.

Deputy Assistant FBI Director Peter Strzok talked for several hours behind closed doors with the House Judiciary Committee. The committee issued a subpoena to compel him to appear even though Strzok had said he would speak voluntarily.

At least one Democrat, California Rep. Ted Lieu, said he had asked Chairman Bob Goodlatte, R-Va., to permit Strzok's appearance to be public. Goodlatte said Wednesday's session would remain closed, Lieu said, but he said the chairman did not oppose an open hearing later on.

Strzok and a onetime FBI attorney, Lisa Page, have together become a political lightning rod for Republicans over thousands of text messages they sent to each other on their official government mobile phones.

Their messages are a primary source account of two law enforcement officials living through the 2016 presidential campaign while, at the same time, according to Justice Department Inspector General Michael Horowitz, they also were carrying on an extramarital affair.

Page and Strzok used their work phones to conceal their relationship from their spouses, Horowitz said. Although FBI officials are permitted to hold and express private political views, their messages were fair game to be collected by the IG — and made public — because they had been exchanged on their government-owned devices.

Page and Strzok shared frank opinions about Hillary Clinton, Bernie Sanders and then-candidate Trump. The most important thread, for Trump and his allies, is the idea that the two might use their official powers to try to block Trump from being elected.

The FBI did not stop Trump from being elected. The IG found that the Justice Department's decision not to prosecute Hillary Clinton was not made as the result of political bias.

That didn't end the political problems for the Justice Department, especially since all the text messages were not released as quickly as members of Congress demanded. Some of them were lost and then recovered, and the "we'll stop it" message didn't appear until this spring.

Key critics including Rep. Jim Jordan, R-Ohio, contend that there was not only a conspiracy inside DOJ against Trump that tried to hurt him — and which may have worked to frame him in the Russia investigation — but DOJ itself has covered up that alleged conspiracy, too.

The Russia Investigations: What The Justice IG Report Revealed

" 'The most profound question of our era: Was there a conspiracy in the Obama Department of Justice and the FBI to prevent Donald Trump from becoming President of the U.S., and was Strzok at the core of the conspiracy?' Judge Andrew Napolitano," Trump wrote.

“The most profound question of our era: Was there a conspiracy in the Obama Department of Justice and the FBI to prevent Donald Trump from becoming President of the U.S., and was Strzok at the core of the conspiracy?” Judge Andrew Napolitano

There is no evidence of a broader conspiracy, and the Justice Department has defended its broader handling of the investigation into whether anyone on Trump's campaign conspired with the Russian attack on the 2016 election.

Deputy Attorney General Rod Rosenstein and FBI Director Christopher Wray are scheduled to appear in an open session before the House Judiciary Committee on Thursday; they're expected to acknowledge the problems documented by the IG but defend the overall work of the Justice Department.

Trump and Republicans have spent months scourging the Justice Department and the FBI over allegations of "bias" and "abuse of power," based in part on evidence uncovered by Horowitz including Page's and Strzok's text messages.

Horowitz's report acknowledged how badly the sum of the choices and appearances had undercut public confidence in federal law enforcement.

Page has left the FBI. She told IG investigators in Horowitz's report that she felt she could keep her political views and her official work properly separate.

"I guess I didn't feel like I was doing anything wrong," Page told investigators. "I'm an American. We have the First Amendment. I'm entitled to an opinion. ... I saw it as, I still see it, as so separate from the investigative activity ... that I didn't really think about it, to be honest with you."

Strzok was escorted out of the building last week but is still understood to be employed by the bureau. Strzok's attorney says he has been unfairly maligned by the political whirlwind that has swirled around the Clinton email investigation and, later, the Justice Department's Russia probe now being led by special counsel Robert Mueller.