Accessibility links
One Father Dropped His Asylum Claim Because He Thought It Would Help Him Reunite With His Daughter When a father and daughter traveled to the U.S. to escape gangs in Guatemala, they were separated at the border. One stayed in California, one went to New York and they couldn't communicate again. 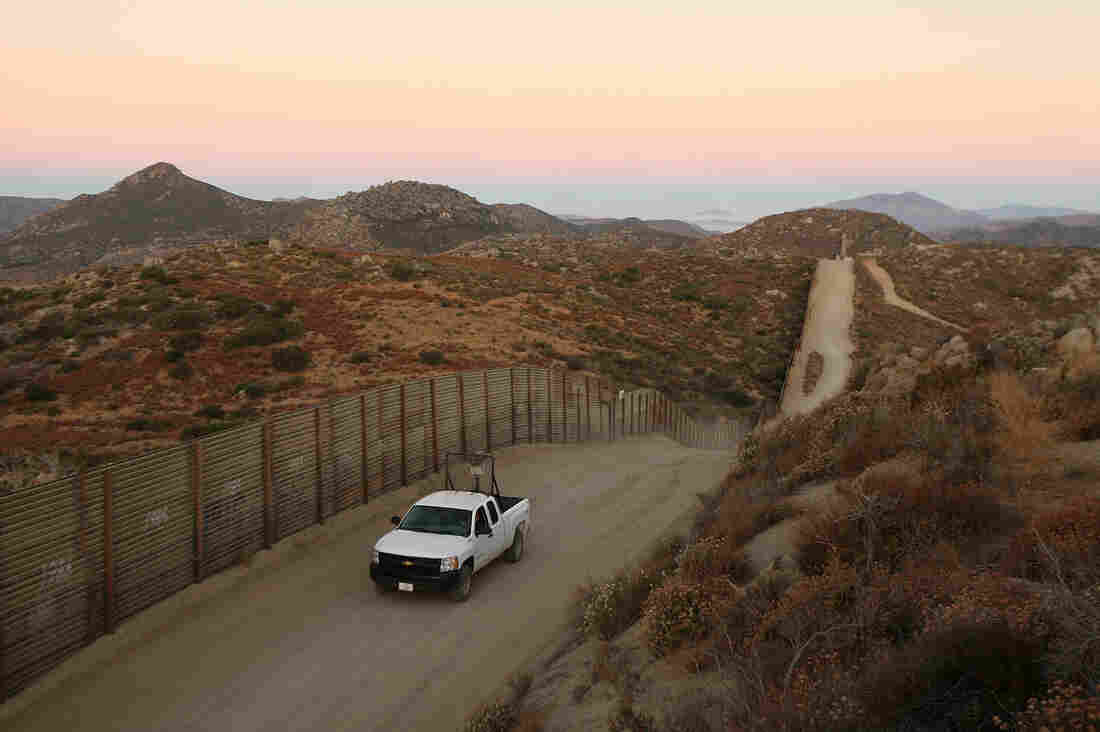 A US Border Patrol agent searches for tracks after a night of surveillance using night-vision equipment as agents carry out special operations near the US-Mexico border fence. David McNew/Getty Images hide caption 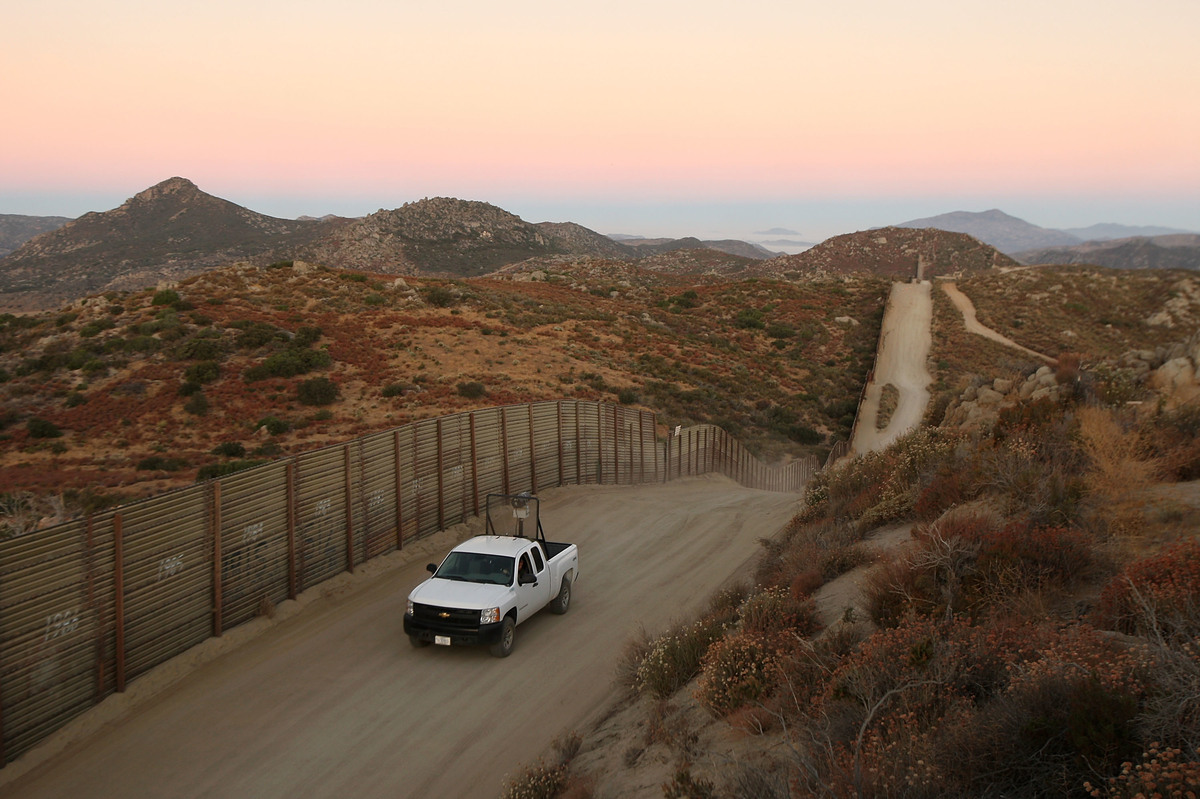 A US Border Patrol agent searches for tracks after a night of surveillance using night-vision equipment as agents carry out special operations near the US-Mexico border fence.

Nazario sat in a cell in a private prison in San Diego, weeping. His 5-year-old daughter had been taken away by U.S. border agents. Filemona had been by his side almost every day of her life. Now he had no idea where she was, whether she was all right or when he would see her again.

The 32-year-old peasant farmer had left his village in the western highlands of Guatemala and traveled all the way across Mexico with Filemona. He says he was fleeing a local gang that had threatened to kill him, which is why we aren't using his or his daughter's last names.

Nazario and Filemona reached the California border on May 16 and, a little after 6 p.m., crossed with a couple of other travelers into the hills of eastern San Diego County. This is their story gathered from Nazario's public defender, court records and conversations with Nazario's wife in Guatemala.

A Border Patrol affidavit describes what happened next: "Agent Sparks encountered four individuals walking the border road toward him." The agent arrested the four, who told him they were citizens of Guatemala. Nazario acknowledged that he had entered the United States illegally, the agent said. Nazario said that he had come to the U.S. to ask for asylum, according to a legal declaration he dictated later to his court-appointed criminal defense lawyer.

At the Border Patrol station in Campo, Calif., Nazario was told he would be sent to jail. He was to be prosecuted in federal court for the misdemeanor offense of illegally entering the country.

Scared, Filemona clung to him, Nazario said in his declaration. And then: "Two Border Patrol agents grabbed her out of my arms ... My daughter was screaming and crying. And so was I."

Officials with U.S. Customs and Border Protection, which oversees the Border Patrol, did not respond to repeated requests for comment.

Nazario said the agents told him he would be in jail for two or three days and then would be returned to his daughter, who would stay at the Border Patrol station. But that's not what happened.

Nazario and his daughter walked into the United States in the midst of a dramatic reworking of how the U.S. handles unauthorized immigrants — including those seeking asylum and those traveling with children.

Thousands of children like Filemona have been removed from their parents and placed into a confusing system of institutional care that is stretched beyond its maximum capacity. Government directives have shifted repeatedly in recent days, leading to confusion and lack of communication among agencies.

Back in their mountain village in Guatemala, Filemona liked to play and write and draw in her notebook, said Filemona's mother, Marcela, who spoke to NPR member station KQED by phone.

But, she said, a local gang began to menace Nazario. They tried to extort money from him and threatened murder, Marcela said. In Guatemala, after years of civil war and economic hardship, more young men are drawn to gangs and can commit violence with impunity. Nazario felt he had to escape. He had relatives in California. Worried that Marcela would have difficulty managing the farm with two small children, the couple agreed Nazario would take his daughter with him.

After Nazario had gone, Marcela said the gang members returned, looking for him. They beat her up, she said, but "at least they didn't kill me."

In San Diego, Nazario was held by the U.S. Marshals Service while his criminal trial went forward. He spent two weeks locked in a detention facility run by the Geo Group, a private prison company contracted by the government. Because he was a criminal defendant, the government appointed him a public defender, which is not the case in immigration matters. Many immigrants appear in court without a lawyer.

He said the authorities never told him where his daughter was.

When James Chavez, a federal public defender, first met with Nazario, he spent a long time trying to explain the complex U.S. system, with its criminal and immigration proceedings.

"Nazario is an individual without any formal education," said Chavez. "I'm not confident that he fully understood what happened to him. And that's not uncommon."

Chavez began to search for Filemona, with the help of the American Civil Liberties Union and the Guatemalan Consulate. It took 10 days before he located her. She had been put in the custody of the Office of Refugee Resettlement, and transferred to New York.

"I do not know where New York is. I was told it was very far," Nazario said in his declaration.

Officials with ORR did not respond to repeated requests for comment and Chavez did not want to divulge exactly where Filemona was staying, for fear of jeopardizing her quick release. But most very young children in ORR custody are housed in foster homes, rather than institutional shelters, according to Anthony Enriquez, director of the unaccompanied minors program at Catholic Charities of New York. Foster families are hired by the nonprofit agencies that contract with ORR to care for the children.

It can take as many as ten days before Catholic Charities staff can communicate with kids in ORR custody, said Enriquez. Once they do, he and his staff work with ORR case managers to establish contact between children and their parents. Filemona was able to speak to her mother about three weeks ago.

Marcela said her little girl told her she did not want to be where she was. She wanted to be back home with her family.

"I'm desperate," said Marcela in Spanish. "I don't know where she is. I don't know what that place is like. I still don't know how she is. So I feel desperate. I feel sad every day."

In New York, the Catholic Charities lawyers are scrambling to get the children's cases before a judge in the notoriously overburdened immigration courts.

"As dedicated lawyers, we're trying to move this as fast as possible," Enriquez said. "The longer children are separated, the greater the risk of psychological damage."

But because the immigration court process for children has more protections, it can take longer. All unaccompanied children, including those like Filemona who were rendered unaccompanied, are entitled to a hearing before an immigration judge.

Giving up on protection in the U.S.

Back in San Diego, Nazario remained distraught. In spite of the danger that propelled him north, he decided to abandon his asylum claim. If he had pursued asylum he would likely have been locked up for months, or even years — without Filemona.

In his declaration, he said: "After being in jail for two weeks and having my daughter taken away from me, I decided that the United States is not a place that would protect me."

My impression of Nazario is that he was deeply depressed, maybe even broken.

On May 30, he pleaded guilty to illegal entry in criminal court and was sentenced to time served. His hope was that if he accepted deportation by immigration authorities, he would be reunited with his child.

Then federal marshals handed Nazario over to U.S. Immigration and Customs Enforcement, which took him to a different private prison in San Diego just for people in immigration proceedings — the Otay Mesa Detention Center, run by a company called CoreCivic. His lawyer said it took a couple more weeks before an ICE agent came to talk to Nazario about his asylum claim and his decision to give it up.

"My impression of Nazario is that he was deeply depressed, maybe even broken," said Chavez, the public defender who met with Nazario five or six times while he was jailed in San Diego, even after the criminal case had been resolved.

Finally, on June 19, ICE transferred Nazario to Arizona. And the next day, the very same day that President Trump reversed his stance on separating families, Nazario was flown back to Guatemala City. Filemona was not with him.

In the five weeks Nazario spent in U.S. government custody, he was never able to speak to his daughter. He didn't have money for a jail phone call. And James Chavez, juggling the legal demands of many other cases, couldn't make it happen.

Chavez said that Nazario's case is the most disturbing he'd had in a decade as a federal defender and he isn't willing to let it go.

"This case has touched me personally, being a father of two small children myself and having gotten to know a good man who's going through a real nightmare," he said. "Just as a fellow human being, I want to make sure I do everything I can to help him be reunited with his young daughter."

So he said he'll keep working with the Guatemalan Consulate and the immigration lawyers in New York to get Filemona sent safely back to Guatemala. It could take weeks.