Accessibility links
John Coltrane's Lost Album 'Both Directions At Once' Is A Window Into His Pursuit Of the Impossible Between his classics My Favorite Things and A Love Supreme, Coltrane recorded these sessions on a single day in 1963. 55 years later, Both Directions at Once arrives like a rare celestial event. 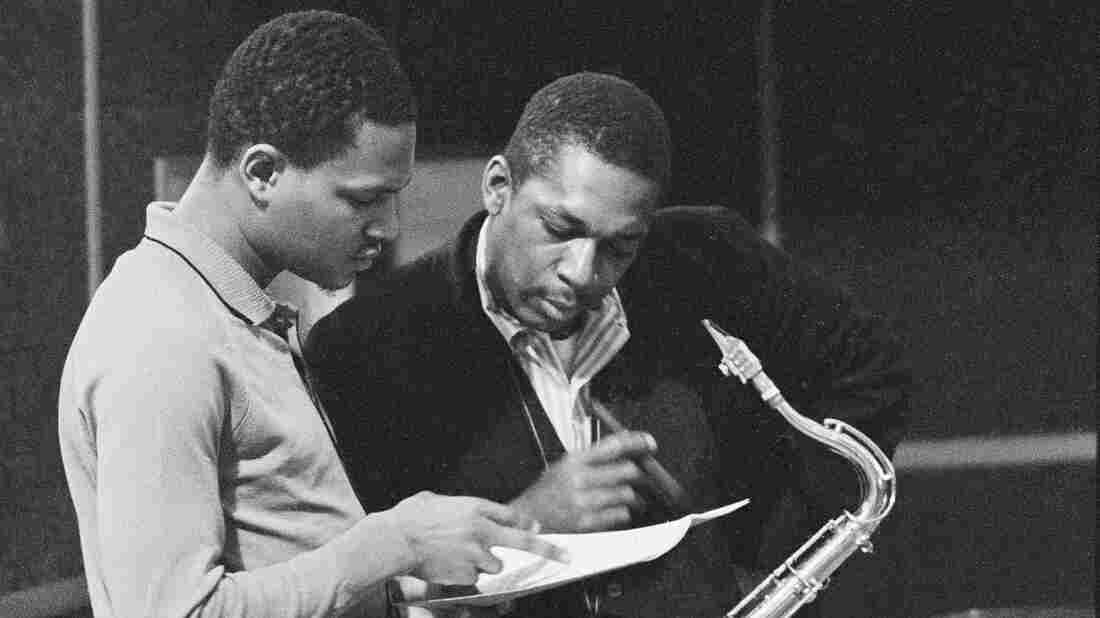 John Coltrane (right) with McCoy Tyner at New Jersey's Van Gelder studios in 1963, one day after the session that would become the newly unveiled Both Directions at Once. Joe Alper /Joe Alper Photo Collection LLC hide caption 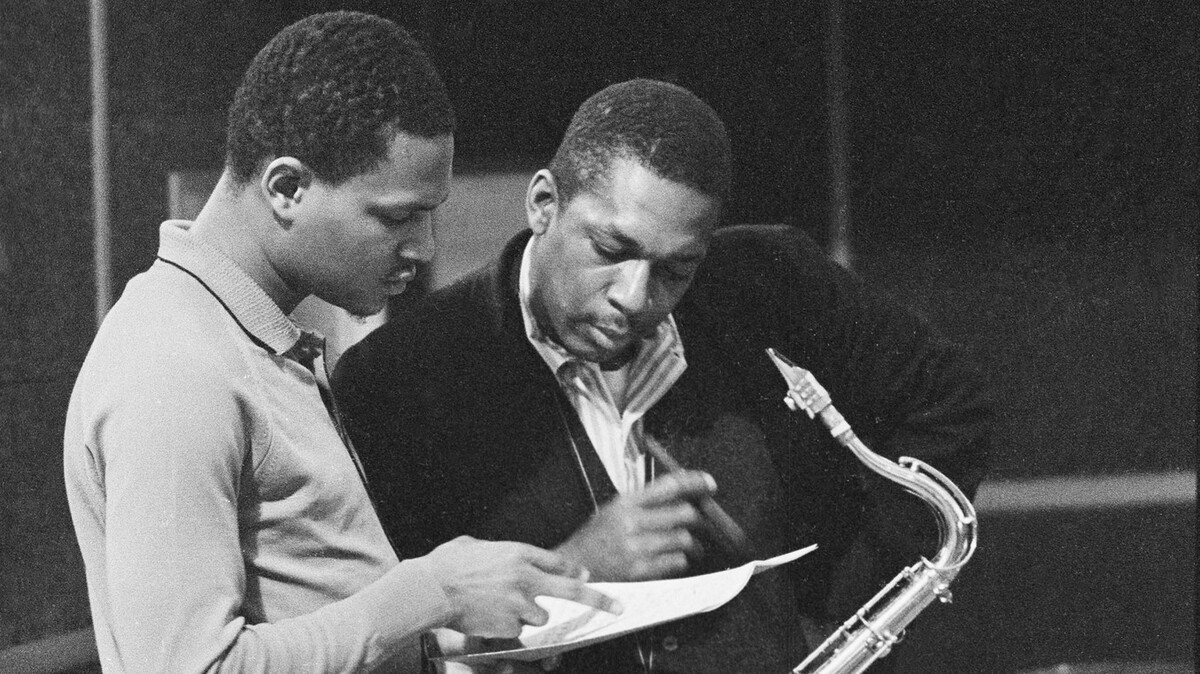 John Coltrane (right) with McCoy Tyner at New Jersey's Van Gelder studios in 1963, one day after the session that would become the newly unveiled Both Directions at Once.

The improbable new release by John Coltrane, Both Directions at Once: The Lost Album, arrives with the excitement of a rare celestial event. A small trove of previously unissued studio material recorded by the saxophonist and his quartet on a single day in 1963, it has already caused a commotion prior to its release this Friday. "Like finding a new room in the Great Pyramid," is how Sonny Rollins described the discovery, in a quote from the liner notes that has widely circulated, as a fond gesture from one colossus to another.

Our clamoring interest in this album, which comes from reference tapes kept by the family of Coltrane's first wife, Naima, isn't hard to understand. The John Coltrane Quartet — with McCoy Tyner on piano, Jimmy Garrison on bass and Elvin Jones on drums — occupies the first tier of significance among working groups in jazz, and was nearing an imposing creative peak in 1963. The band was a volatile compound but also steadfast, not least in its pursuit of heroic epiphany.

Both Directions at Once fills in a small but crucial gap in the group's studio output, bringing new material to the historical record. Produced by Ravi Coltrane (John's son, also a saxophonist) with Ken Druker (an executive at the Verve Label Group), it compiles seven tracks into an album-length statement, with a roughly equal portion of alternate takes. Among the originals are two compositions unfamiliar to even the most serious Traneologists, identified not by title but rather by session log number. One of these, "11383," is a minor blues with some of the same incantatory fervor that Coltrane would harness the following year, for A Love Supreme.

According to Ashley Kahn's insightful liner essay, Both Directions at Once borrows its title from something Coltrane once said to his fellow saxophonist Wayne Shorter, "about starting a sentence in the middle, and then going to the beginning and the end of it at the same time ... both directions at once." It's a syntactically impossible move that you can nevertheless often hear Coltrane striving toward as an improviser, even here.

There's another, more linear connotation to the new album's title phrase, which involves the harmonic conventions that Coltrane had mastered and the skyrocketing abstraction to which he was increasingly drawn. "Trane's influence moves in both directions," wrote the poet and critic LeRoi Jones in 1963, in an article for Metronome. (Several years later, when he was known as Amiri Baraka, this piece appeared in his collection Black Music.)

But the push-pull dichotomy that registers even more clearly on Both Directions at Once is the tension between a process and a product. Few artists have ever been more forthright in their evolutionary path than Coltrane, whose style was forged in the fires of bebop and eventually came to emit conflagrant properties of its own. And the circumstances around this archival find serve as a reminder of Coltrane's eternal balancing act, as a self-willed sonic explorer encumbered with obligations — to a record label, to a listening public, to a recognizable style.

In 1961, Coltrane made the leap to a new label, Impulse! Records. He was fresh off the commercial triumph of "My Favorite Things," which had given him (and his previous label, Atlantic) a hit single earlier in the year. The success of his sleek arrangement of the Rodgers and Hammerstein tune, which toggles smoothly between minor and major keys, had propelled Coltrane into a new level of prominence. This was cause for some ambivalence.

"I'm always walking around trying to keep my ear open for another 'My Favorite Things' or something," Coltrane told Ralph J. Gleason, mere weeks after that record was released. Rather than bask in his newfound success, he sounded wistful about a time when he could disappear into a practice regimen: "I didn't have to worry about making a good record, because that wasn't important," he mused. "Maybe I should just go back in the woodshed and just forget it."

What he did instead was take the woodshed to the bandstand, notably at the Village Vanguard later in '61. His band during that run featured an inspired frontline partner, the saxophonist, flutist and bass clarinetist Eric Dolphy — though the droning modalities and trancelike effect in the music drove one DownBeat reviewer, infamously, to decry Coltrane and Dolphy for "pursuing an anarchistic course in their music that can but be termed anti-jazz."

Bob Thiele, Coltrane's producer at Impulse!, was undaunted by the ardency of the music, but he also had a practical motive to reposition his artist for commercial success. He did so while allowing Coltrane a remarkable largesse in the recording studio, often unbeknownst to the label's corporate owners. "People like Coltrane, or Duke Ellington, record so much they almost forget about what was recorded, and it literally piles up," he said. A savvy producer, Thiele was always thinking of ways to nestle this outflow into a coherent frame.

Accordingly, there was some prime new Coltrane product hitting the market in the first few months of 1963. Duke Ellington & John Coltrane, an elegant intergenerational summit, was released in February, about a month before Ballads, whose title announces the concept. The tracks heard on Both Directions at Once were recorded on March 6; the very next day, Coltrane and his quartet were back in the studio to make John Coltrane & Johnny Hartman, a low-flickering marvel of mood and melodic intention. (Writing in Esquire in 1990, Daniel Okrent pronounced this "the greatest record ever made.")

Coltrane and his quartet were just wrapping up a two-week engagement at Birdland when they entered Rudy Van Gelder's studio in Englewood Cliffs, N.J. on March 6. (The session apparently had to be bumped earlier in the day so they could race to the gig.) This particular Birdland run enjoys some notoriety because of a bootleg recording of "One Up, One Down," a ferocious anthem with a spiky melodic line based on an augmented scale.

"One Up, One Down" is one of four originals that appear on Both Directions at Once. And while it's a studio recording, it stands as prime example of the process overtaking the product. Coltrane's tenor pulses and keens, and Jones is a fount of intemperance, practically blowing out the microphones. The track isn't necessarily forbidding — Tyner keeps a tether to its tonal root — but it is overwhelming, a flood to the synapses, with a fury that feels imported from the gig. (Its title is an after-the-fact designation, based on similarities to a piece known as "One Down, One Up," which Coltrane recorded in 1965. On the session logs, "One Up, One Down" is "11387.")

"Impressions" scores another win for the process. This piece, one of Coltrane's signature themes, can be heard in four separate takes on Both Directions at Once. Comparing and contrasting these versions, as many Coltrane devotees are sure to do, reveals an imprecise yet methodical refinement of an idea. The second take is a little slower than the first, as if Coltrane were unsatisfied with the groove. On the third and fourth takes, he has Tyner sit out, allowing himself the harmonic freedom of strict backing from bass and drums.

At the time, "Impressions," too, was an untitled composition ("11385"). But it had substantial history in Coltrane's set list. He'd performed it at the Village Vanguard in 1961, and the urgency of that live tape was so compelling that Thiele ultimately opted to use it, rather than these more recent, more polished studio takes, for an album titled Impressions near the end of '63.

The evident care that Coltrane put into capturing "Impressions" also applied to the other untitled original known as "11386," a bobbing theme that shifts between Afro-Latin and swing rhythm, with soprano saxophone in the lead. This well-formed tune, which appears nowhere else in the known Coltrane sessionography, has three full takes on Both Directions at Once. It seems clearly intended for an album of some sort, but what would that album have been? Knowing Thiele's predilections as a producer, and Coltrane's unremitting focus on the forward view, there's ample reason to doubt it would resemble the album we're hailing today.

We're too accustomed to the idea of Coltrane's dauntless genius, and to the spectacular creative velocity he embodied before his death at age 40, to fix Both Directions at Once in our sights with total clarity. But it's possible to notice seams in the fabric — how the sinuous, droning version of "Nature Boy" that appears here ­is less haunting and three-dimensional than the one Coltrane would record two years later, suggesting something unfinished. How an intoxicating track titled "Slow Blues" amounts to a master class in Coltrane's development of 12-bar blues form — but feels far better suited, at a leisurely 11:27, to a nightclub set. (Tyner doesn't so much as play a note until almost six minutes in.)

As for "Vilia," an original that incorporates part of the melody from Franz Lehár's The Merry Widow, it feels spiritually connected to "My Favorite Things" — as much in Coltrane's purity of line on soprano as in the buoyancy of the theme. Tellingly, "Vilia" is the only track from these sessions that ever saw previous release: I grew up knowing it as a bonus track on the CD reissue of Live at Birdland. (It had also appeared on a label compilation in '65.)

Just over a year after these sessions in March of 1963, the Coltrane quartet would record Crescent, an album that approaches the threshold of a masterpiece. Then came A Love Supreme, which many listeners consider one of the finest jazz albums ever made — and, one could argue, the most glorious convergence of process and product in Coltrane's storied career.

So the presentation and rollout of Both Directions at Once: The Lost Album signal the deepening enshrinement of an image that just happens to be some form of the truth. In the end, it makes little difference whether or not this superlative clutch of material amounts to a "lost album" or something messier and less conclusive. What really matters is the seeking, as Coltrane always understood.