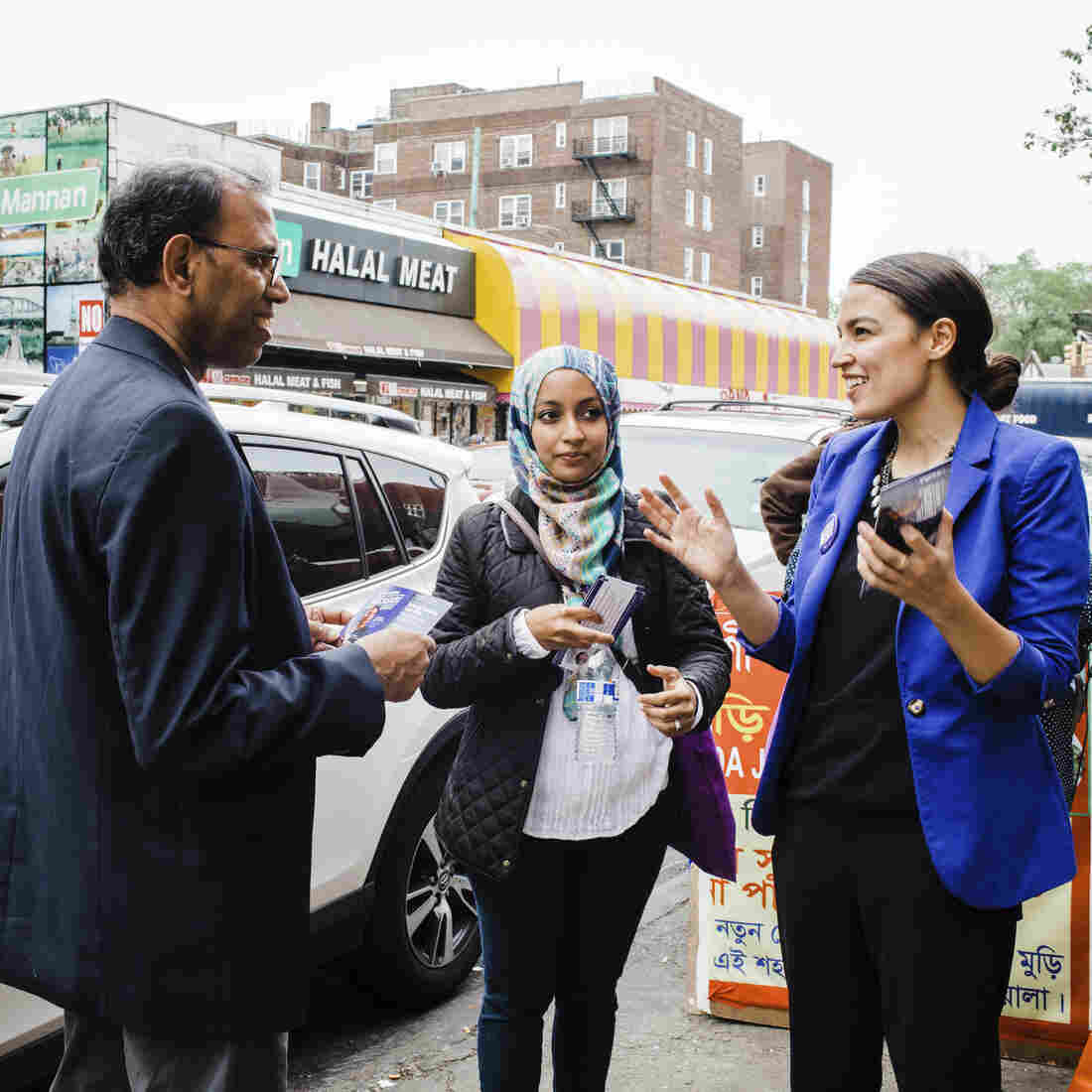 A May 2016 photo provided by the Alexandria Ocasio-Cortez campaign shows the candidate during a Bengali community outreach event in New York. Corey Torpie/AP hide caption 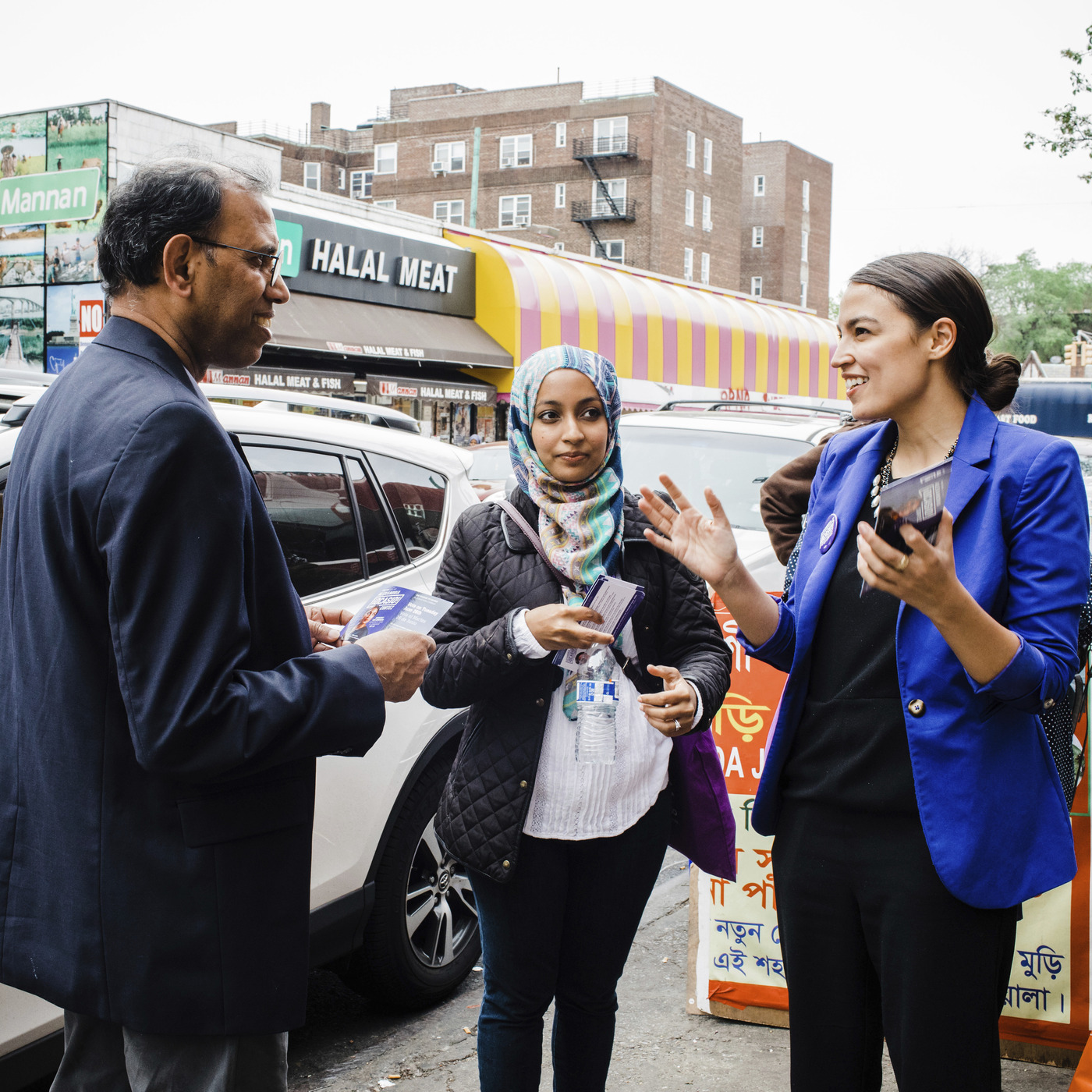 A May 2016 photo provided by the Alexandria Ocasio-Cortez campaign shows the candidate during a Bengali community outreach event in New York.

Ocasio-Cortez, 28, a former organizer for Bernie Sanders' presidential campaign and a onetime staffer for the late Sen. Ted Kennedy, ran on an unalloyed leftist progressive platform, calling for a "political revolution" that includes Medicare and higher education for all, gun control measures, an end to private prisons and the abolition of the U.S. Immigration and Customs Enforcement agency.

The district Ocasio-Cortez hopes to represent is in the Bronx and Queens; roughly 50 percent of the people there are immigrants — and she says they've been yearning for a representative who speaks to them, and speaks for their needs.

"We're having an affordability crisis in New York City," Ocasio-Cortez told NPR's Steve Inskeep on Morning Edition on Wednesday. "We have a security crisis with our current immigration system, and I think I was able to allow our community to really feel seen and heard, and visited and advocated for."

She wants to abolish ICE because the agency represents the militarization of immigration enforcement, Ocasio-Cortez said. It was part of a trend, she said, of viewing and treating immigrants as criminals.

"What we're basically saying is that the structure of ICE — in a similar manner as the structure of the Patriot Act — is kind of built on a scaffolding of questionable civil liberties infringement and abuse," she said. "So what we're really talking about is reimagining immigration to be humane, and in a way that is transparent and accountable."

Ocasio-Cortez defeated Crowley, the chair of the House Democratic Caucus, whom many saw as a possible successor to former House Speaker Nancy Pelosi should Democrats win a majority in November.

As for whether she feels Pelosi should continue to lead Democrats in the House, Ocasio-Cortez said she's open to the idea of new leadership in Congress. She added: "I think it'd be inappropriate to commit to any one individual before we've even won back the House in November. Let's make sure we do that, and then we can have that conversation."

Crowley, a 10-term incumbent, had not even faced a primary challenger since 2004. In this race, he did not attend either of the two debates that had been scheduled between the two candidates.

In a profile published this week in Vogue magazine, Ocasio-Cortez was described as "a third-generation New Yorker whose family has roots in Puerto Rico [and who] looks a lot more like the constituents in the very diverse 14th District than Crowley, a 56-year-old white man."

Wow! Big Trump Hater Congressman Joe Crowley, who many expected was going to take Nancy Pelosi’s place, just LOST his primary election. In other words, he’s out! That is a big one that nobody saw happening. Perhaps he should have been nicer, and more respectful, to his President!

Ocasio-Cortez's leftist outlook found her tilting at the Democratic Party establishment. Most notably, she is a card-carrying member of the Democratic Socialists of America, which has its roots in the Socialist Party of America. That group's most famous leader was Eugene V. Debs, a union leader who was a perennial presidential candidate on the Socialist ticket from 1900-1920.

"What I see is that the Democratic Party takes working class communities for granted, they take people of color for granted and they just assume that we're going to turn out no matter how bland or half-stepping these proposals are," Ocasio-Cortez said in a recent interview, according to The New York Times.

"This is not an end, this is the beginning," she told cheering supporters on Tuesday.

On Sunday, Ocasio-Cortez joined a protest in Tornillo, Texas, at an ICE child detention center. She has also expressed solidarity for Puerto Rico, still recovering from Hurricane Maria.

In a bizarre twist, Rep. Crowley sent a woman with slight resemblance to me as his official surrogate to last night’s debate.

@repjoecrowley’s surrogate said he is in full support of Trump’s embassy change in Israel last month (where 60 people died).

The community was in shock. https://t.co/LvNj0rlhFw

Late Tuesday, President Trump suggested in a tweet that Crowley's defeat — the largest primary upset since 2014, when then-Majority Leader Rep. Eric Cantor was defeated by economics professor Dave Brat in Virginia's 7th Congressional District — may have been because he is a "Big Trump Hater" who "should have been nicer, and more respectful, to his President!"

But more likely, Ocasio-Cortez's win is an indication that Democrats are willing to tack to the left to counter Republicans who seem to be steering a course ever-farther to the right. Even so, it would be easy to read too much into her upset victory in a firmly progressive congressional district that is carved out of parts of the Bronx and Queens — and nearly half Hispanic.

"Women like me aren't supposed to run for office," Ocasio-Cortez says in a campaign video that went viral.

"I wasn't born to a wealthy family or powerful family — mother from Puerto Rico, dad from the South Bronx. I was born in a place where your ZIP code determines your destiny," she said.

Despite Crowley outraising Ocasio-Cortez by 10-to-1, her targeted campaign and aggressive ground-game were key. So, too, was her opponent's decision not to show up to debate her.

"This is the second primary debate in which Mr. Crowley was a no-show," according to a scathing New York Times editorial published last week. "A spokeswoman for Mr. Crowley said he had scheduling conflicts that wouldn't allow him to attend the two debates, inevitably leaving voters to wonder — what are we, chopped liver?"

In November, Ocasio-Cortez will face Republican Anthony Pappas, a St. John's University professor who teaches economics and finance. He ran unopposed in his party's primary.