Accessibility links
Japan's Hayabusa2 Spacecraft Arrives At Its Asteroid Destination The mission includes a plan to bring a sample back to Earth. It's the first time humans have been able to study a C-type asteroid at such a close range for an extended period. 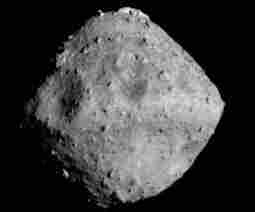 Asteroid Ryugu, photographed on June 26 by the Hayabusa2 spacecraft, was the Japanese mission's destination. The craft will travel alongside the asteroid for 18 months. JAXA, University of Tokyo and collaborators hide caption

The Hayabusa2 spacecraft has made a successful rendezvous with the asteroid Ryugu, 177 million miles from Earth. Japan's JAXA space agency confirmed on Wednesday that the craft has taken up a position 12 miles off Ryugu. Up next for Hayabusa2: exploring the surface — and bringing a sample back to Earth.

Hayabusa2 reached its destination 3 1/2 years after launching from Earth in late 2014. JAXA says the meetup went according to plan, as the craft used its thrusters to establish a constant distance from Ryugu, which can currently be seen zipping across the Gemini constellation.

Japanese researchers will use Hayabusa2's current vantage point to study the asteroid and evaluate possible sites for collecting samples.

"From a distance, Ryugu initially appeared round, then gradually turned into a square before becoming a beautiful shape similar to fluorite [known as the 'firefly stone' in Japanese]," said project manager Yuichi Tsuda. "Now, craters are visible, rocks are visible and the geographical features are seen to vary from place to place. This form of Ryugu is scientifically surprising and also poses a few engineering challenges."

Ryugu also spins like a top, with its rotational axis perpendicular to its orbit. Its shape has been compared to an octahedral dice.

The Hayabusa2 is carrying, as NASA recently put it, "an armada of separable probes, including two impactors, four small close-proximity hoverers, three small surface hoppers, and the Mobile Asteroid Surface Scout (MASCOT) which will land, study, and move around on Ryugu's surface." 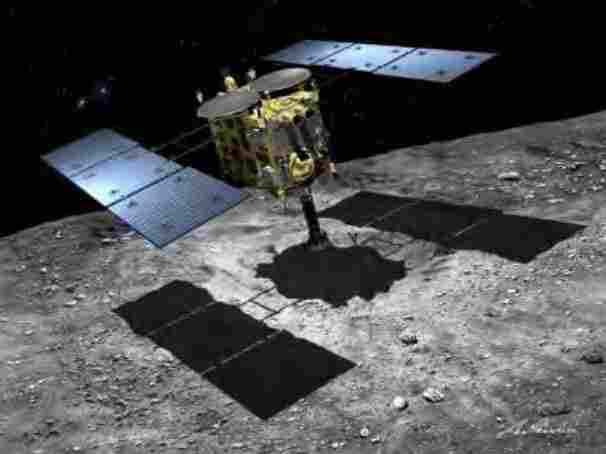 An artist's illustration shows the planned landing of the Hayabusa2 spacecraft on an asteroid. Akihiro Ikeshita/JAXA hide caption 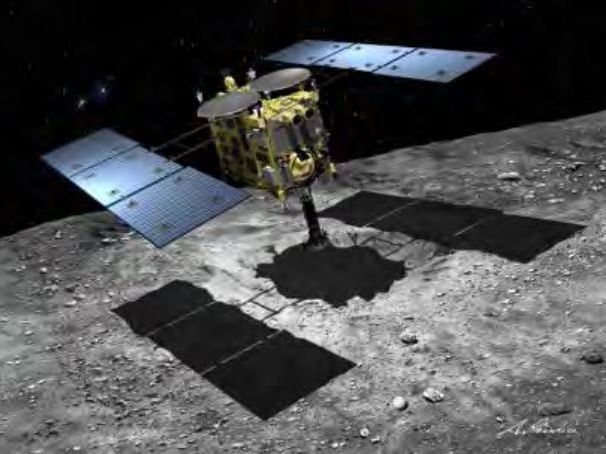 An artist's illustration shows the planned landing of the Hayabusa2 spacecraft on an asteroid.

In Japan and beyond, researchers are eager to see the data from Hayabusa2's visit — it's the first time humans have studied this type of asteroid, known as a C-type asteroid, at such a close range for an extended period.

Scientists plan to use the impactor tool to extract fresh samples from beneath the asteroid's surface. And because the C-type Ryugu is a primitive asteroid, it could be rich in carbon, organic materials and frozen water. That means, as JAXA says, studying the asteroid could help "clarify interactions between the building blocks of Earth and the evolution of its oceans and life," as well as to understand more about how the solar system works.

JAXA has released long-exposure images that draw out Ryugu's features, often depicting it as a gray mass. But in reality, the asteroid has an intensely dark surface that's known to reflect unusual colors.

Ryugu is a little over a half-mile in diameter. It was discovered in 1999, in an orbit that sometimes sees it travel inside of Earth's path around the sun — and also shoots out past Mars' orbit. The asteroid completes its own orbit every 15.5 months.

Hayabusa2 will spend some 18 months studying Ryugu; it's slated to return to Earth in 2020.

Hayabusa means "falcon," and Ryugu means "dragon's palace." The asteroid's name is a reference to a traditional Japanese folk tale about a diving fisherman who visits a magical underwater castle and returns with treasure.

This is the second Japanese spacecraft bearing that name to visit a target asteroid. In 2006, the first Hayabusa craft managed to touch down on the surface of the near-Earth asteroid Itokawa three times — revealing that instead of being a chunk of solid rock, the asteroid was essentially "a bunch of rubble being held together by shared gravity," as NPR's Joe Palca reported.