Accessibility links
DNC Officials Vote To Scale Back Role Of 'Superdelegates' In Presidential Nomination A Democratic National Committee panel has approved a plan to bar unpledged party leaders from voting on the first ballot at presidential nominating conventions, settling a lasting fight from 2016. 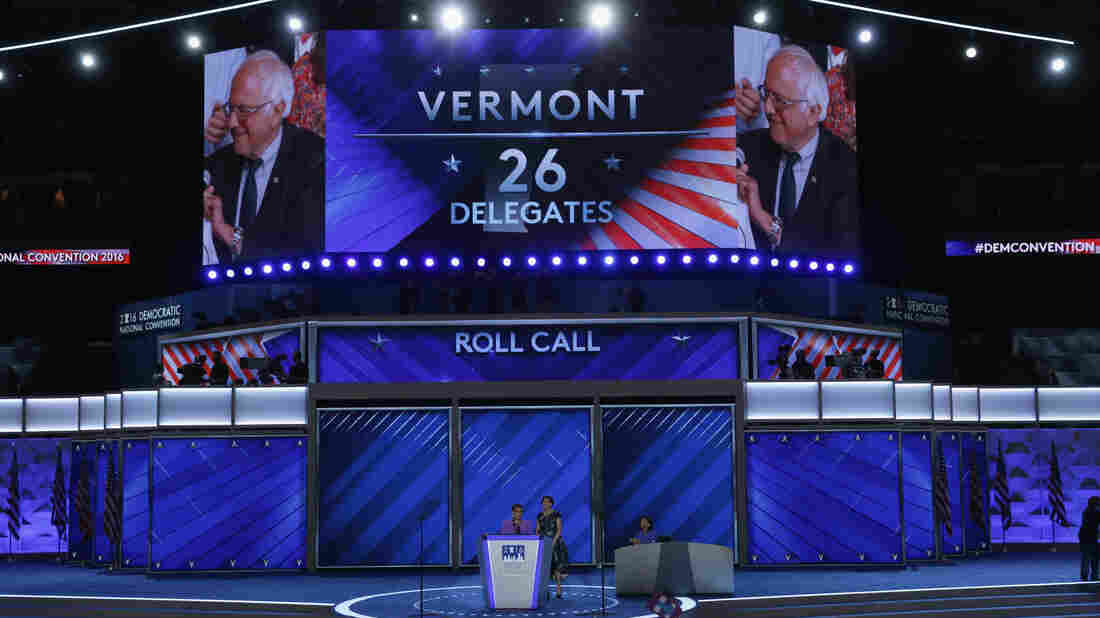 Sen. Bernie Sanders is seen after the Vermont delegation cast their votes during roll call at the 2016 Democratic National Convention in Philadelphia. After the bitter primary between Sanders and Hillary Clinton, the DNC set up a process that has led to reducing the role of party leaders in selecting the presidential nominee. Alex Wong/Getty Images hide caption 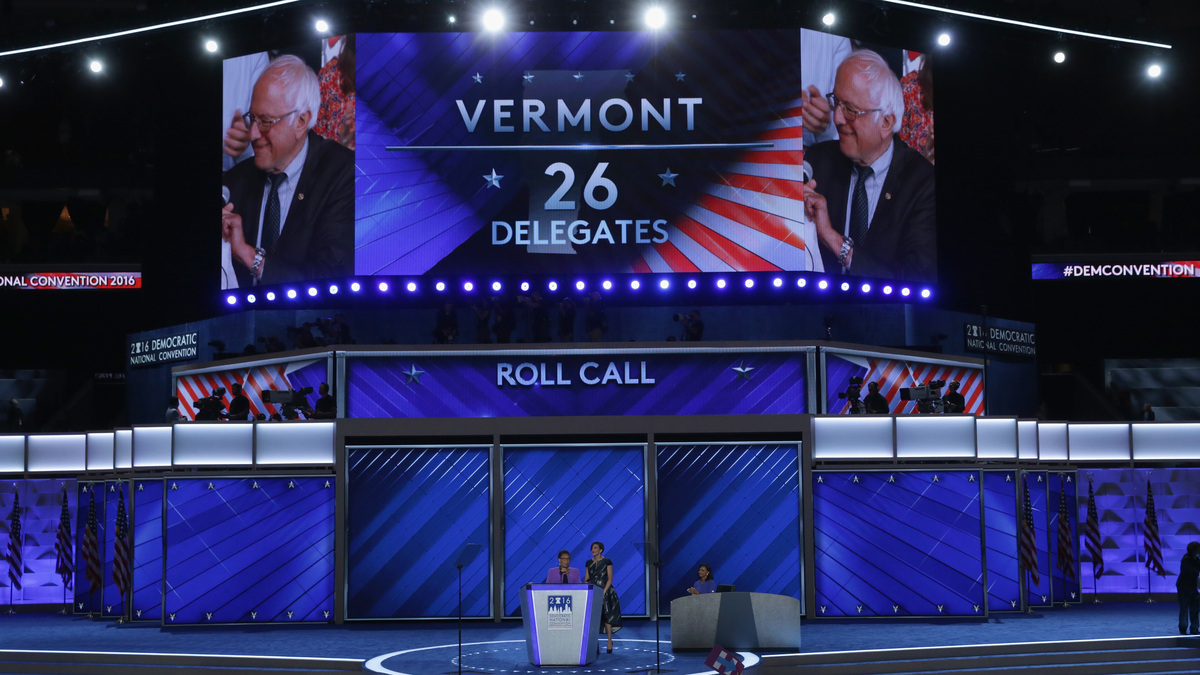 Sen. Bernie Sanders is seen after the Vermont delegation cast their votes during roll call at the 2016 Democratic National Convention in Philadelphia. After the bitter primary between Sanders and Hillary Clinton, the DNC set up a process that has led to reducing the role of party leaders in selecting the presidential nominee.

A day after scoring dramatic victories in Maryland and New York primaries, progressives have notched another major win in the Democratic Party.

Speaking ahead of the vote, DNC Chair Tom Perez said the shift is part of a broader effort to rebuild trust and heal the wounds of the still-lingering 2016 primary. "No candidate should have an accumulated lead, whether real or perceived, before a first ballot is cast," Perez said.

Eliminating superdelegates had been a top priority for Vermont Sen. Bernie Sanders in the wake of the 2016 primary. The independent called the vote "a major step forward" in a statement, saying, "this decision will ensure that delegates elected by voters in primaries and caucuses will have the primary role in selecting the Democratic Party's nominee."

Ever since 1984, the Democratic Party has given hundreds of party officials free rein to vote for any presidential candidate they want to, regardless of which candidate emerged from the primary season with the most delegates, or how their home state's primary or caucus turned out.

Superdelegates have never gone against the will of primary voters in picking Democratic presidential nominees. But their ability to do just that, if they wanted, and to affect the trajectory of a race has long been a major tension point between grassroots activists and the party establishment.

The question of how superdelegates would vote loomed over the 2016 primary, when an overwhelming majority of the Democratic establishment backed former Secretary of State Hillary Clinton over Sanders.

Clinton won substantially more pledged delegates than Sanders in primaries and caucuses, but as Sanders' surprisingly strong primary run stretched through the spring, many of his supporters pointed to broad support for Clinton from unpledged delegates as Exhibit A of establishment cronyism.

This frustration reached a boiling point the day before the final set of primaries, when the Associated Press declared Clinton the Democrats' presumptive nominee based on a poll of superdelegates.

In the wake of the election, the DNC established the Unity Reform Commission to recommend changes for future elections. The commission, made up of people picked by Sanders, Clinton and current DNC leadership, recommended drastically reducing the number of unpledged delegates.

Perez said Democrats ultimately opted for a slightly different plan because he said the remaining pool of superdelegates would have been less diverse.

The unity commission was one of several steps Perez has taken to try and heal the bitter wounds of the 2016 primary, which were exasperated by hacked emails showing many DNC officials openly preferred Clinton to Sanders at a time when they were acting publicly as neutral arbiters. The DNC emails were hacked by Russian operatives as part of a campaign to interfere in the 2016 presidential election, and were released by Wikileaks on the eve of the 2016 Democratic National Convention.

"We have to make sure that we rebuild the trust among many who feel alienated from our party," Perez said at the beginning of the committee meeting.

The new procedures would allow superdelegates to vote for whomever they want in the unlikely event a presidential candidate isn't nominated on the first ballot and the convention becomes contested on the floor.

Given the fact that Democrats expect the 2020 presidential field to be their largest ever, that possibility, while still very remote, is possible.

The full Democratic National Committee will vote on the proposed rule change in August.