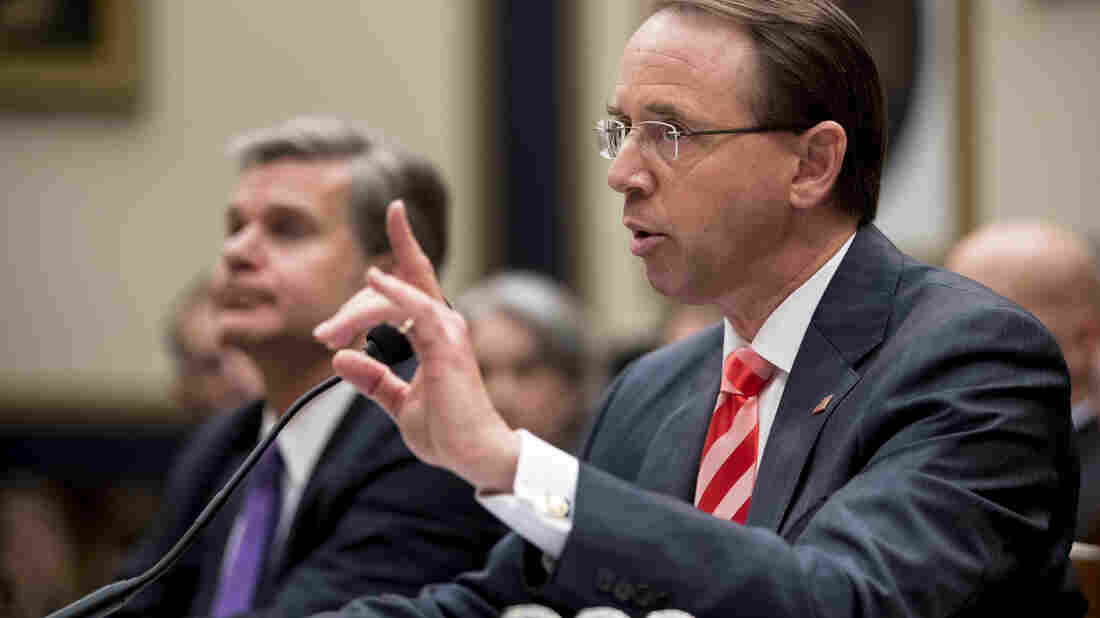 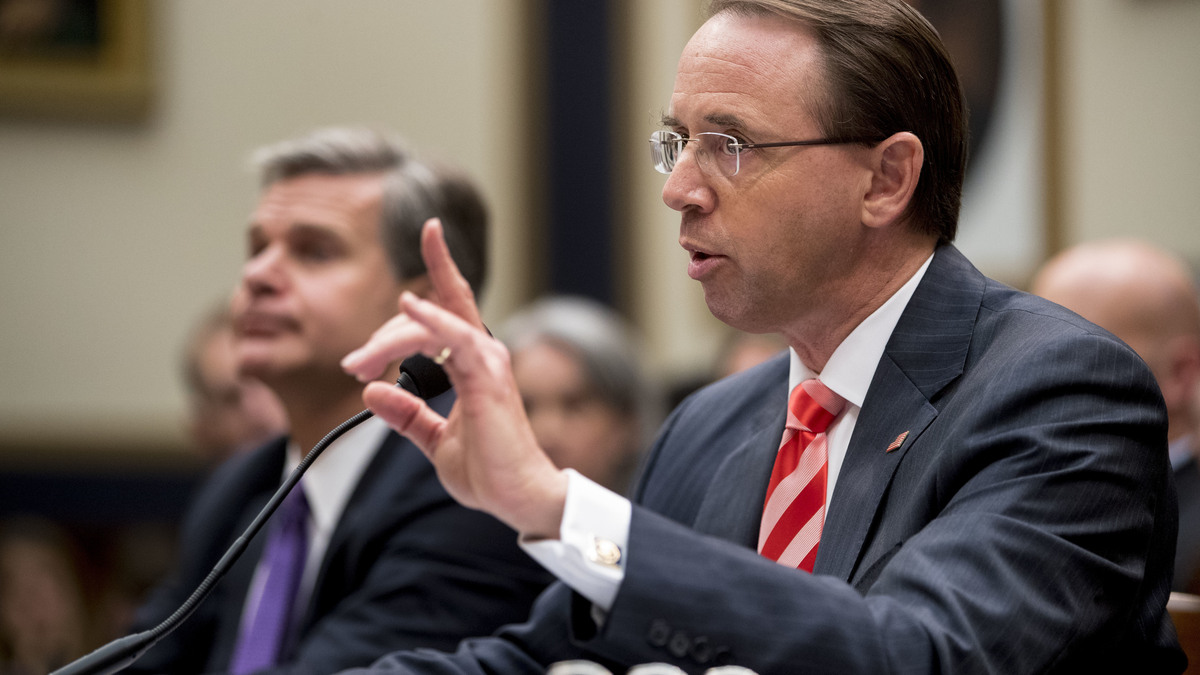 Deputy Attorney General Rod Rosenstein told lawmakers Thursday that he objected to personal attacks about purported Justice Department stonewalling on the Russia investigation. With him is FBI Director Christopher Wray.

Deputy Attorney General Rod Rosenstein clashed with Republican lawmakers in a contentious House Judiciary Committee hearing on Thursday as he challenged allegations that the Justice Department is hiding information from Congress.

House Republicans accuse Rosenstein — a Donald Trump appointee who oversees special counsel Robert Mueller's investigation into possible ties between the Trump campaign and Russia's attack on the 2016 election — of denying congressional requests for documents related to the Russia probe and the Hillary Clinton email investigation.

The GOP accusations are part of a long-running battle in Congress to try to shape public perceptions of the Mueller investigation, which has so far yielded indictments of 20 people and secured five guilty pleas.

"Why are you keeping information from Congress?" Rep. Jim Jordan demanded of Rosenstein.

The deputy attorney general rejected the idea that he was. The two men launched into a tense exchange in which Rosenstein, his voice rising, told the Ohio congressman how vigorously he objected to the personal attacks about purported Justice Department stonewalling.

"Your use of this to attack me personally is deeply wrong," Rosenstein said.

Shortly after that back-and-forth, the committee took a break for a floor vote on a resolution insisting that the Justice Department fully comply with committee document requests.

That measure, which passed along party lines, is nonbinding, but still is viewed as an attempt to ratchet up the pressure on Rosenstein.

Republicans also made clear that they want Rosenstein to lean on Mueller to conclude his work soon because of the wider political harm they say it's doing to the nation.

"Whatever you got, finish it the hell up, because this country is being torn apart," said South Carolina Rep. Trey Gowdy.

Critics: A scheme to undercut Mueller

Democrats argue that the president's congressional allies are making overly burdensome requests in order to give the president a pretext for firing Rosenstein.

Critics also said they worried that Republicans may share information they learn about the investigation with Trump and his legal team. FBI Director Christopher Wray restated to lawmakers how important it is that the bureau protect secret information as appropriate, including the identities of confidential sources.

And at various points during the hearing, Rosenstein was asked about comments from Trump on Twitter in which the president asked, "When is Bob Mueller going to list his Conflicts of Interest? Why has it taken so long?"

When is Bob Mueller going to list his Conflicts of Interest? Why has it taken so long? Will they be listed at the top of his $22,000,000 Report...And what about the 13 Angry Democrats, will they list their conflicts with Crooked H? How many people will be sent to jail and......

The deputy attorney general told lawmakers that he's "not aware of any disqualifying conflict of interest," and he assured them that Mueller is "moving as expeditiously as possible."

The testimony from Rosenstein and Wray, who is another Trump appointee, before the House Judiciary Committee followed a now-familiar script for such proceedings.

GOP lawmakers pushed their narrative that the Justice Department and FBI were packed with politically biased officials intent on hamstringing the Trump campaign. Democrats said Republicans are trying to undermine the Russia investigation and protect the president.

Texas Democratic Rep. Sheila Jackson Lee said Thursday she thought the Judiciary Committee's work had devolved into a "monster ball," in which members were simply "looking for monsters" within the Justice Department and the FBI.

Both Rosenstein and Wray were already under considerable pressure from House Republicans to turn over documents related to the Russia investigation. Intelligence committee Chairman Devin Nunes, R-Calif., has threatened to hold them in contempt of Congress unless they provide more materials.

The Justice Department generally does not hand over documents relating to an ongoing investigation, particularly one as sensitive as the Russia probe. But it has been giving ground.

Wray said Thursday that the bureau has made an enormous effort to address the congressional demands. He said nearly 900,000 pages have been handed over so far, and the FBI has more than 100 employees working day and night as well as weekends "to collect, review and process thousands of additional pages."

"We are committed to getting through the rest of it," he said.

In the most recent case, the department says it has already bent to congressional demands and provided hundreds of thousands of documents, but lawmakers say officials have redacted or refused to provide certain requested materials.

Most recently, Nunes demanded to know whether the FBI used informants to target members of the Trump campaign.

The Justice Department says it has already answered that question.

The FBI assigned a confidential informant to make contact with a small number of Trump campaign aides in 2016 after they began to receive overtures from Russian agents. Members of Congress briefed on the matter said they've had no indication about anything improper, while former FBI officials have said using such informants is a standard investigative move.

Trump says the use of human sources amounts to improper political snooping by the administration of President Barack Obama.

The FBI warned it had "grave concerns" about a memo Nunes released earlier this year based, in part, on classified information.

Republicans brush aside such objections, saying they are conducting the legitimate oversight that is their duty under the Constitution.

Republicans also point to the recent report from the Justice Department's inspector general about the FBI's handling of the Hillary Clinton email investigation. In the course of that inquiry, the inspector general uncovered text messages between senior FBI agent Peter Strzok and FBI lawyer Lisa Page that disparaged Trump.

At one point in the correspondence, Page asked Strzok whether Trump was really going to become president. "No," he answered, promising that they would "stop it."

Strzok and Page worked on the Clinton email and Russia investigations. Strzok was removed by Mueller from the Russia probe, while Page left after her temporary assignment there ended.

Republicans say the texts show political bias at the FBI that taints both investigations. Democrats say Republicans are trying to sow doubts about the Mueller investigation and any conclusions it may reach.

Strzok was interviewed behind closed doors for 11 hours Wednesday by the House Judiciary Committee. The panels have said they may convene another session with him down the line that takes place in public.