Accessibility links
'Sicario: Day Of The Soldado' Is A Scattershot Sequel The lackluster sequel to 2015's moody and violent Sicario is missing that film's director (Denis Villeneuve), its stars (Emily Blunt and Daniel Kaluuya) and its artfulness.

'Sicario: Day Of The Soldado' Is A Scattershot Sequel

'Sicario: Day Of The Soldado' Is A Scattershot Sequel 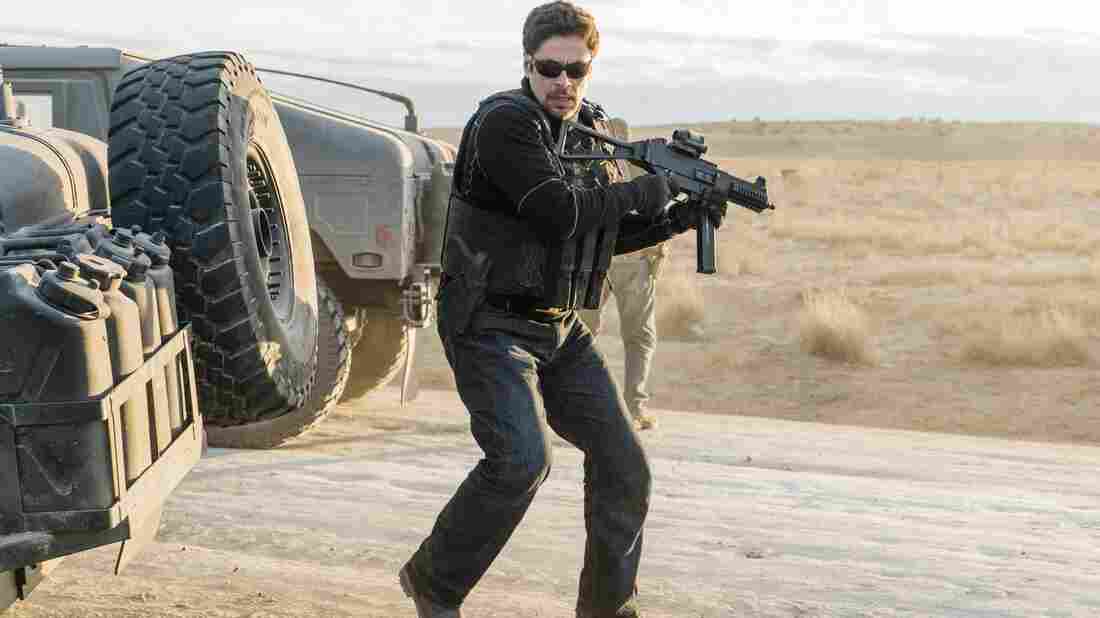 Benicio Del Toro, at least, is back battling drug cartels in Sicario: Day of the Soldado. Sony hide caption 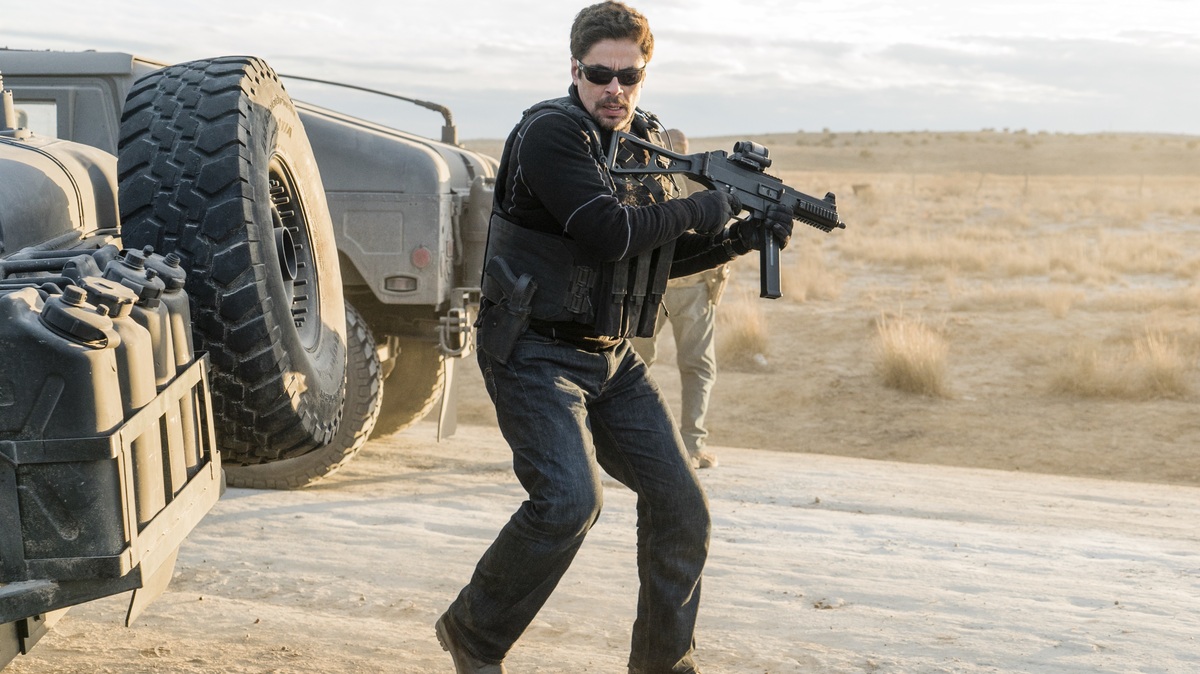 Benicio Del Toro, at least, is back battling drug cartels in Sicario: Day of the Soldado.

Sicario: Day of the Soldado is a specimen of what might be called exploitation verité. This sequel to the grim-but-arty 2015 drug-war thriller Sicario has been stripped of many of its forebear's assets: Director Denis Villeneuve has been having too strong a decade work-wise to be lured back for this nonessential mission. Nor has at-long-last-Oscar-winning cinematographer Roger Deakins returned, nor principal actors Emily Blunt and Daniel Kaluuya. (Get Out hadn't yet made Kaluuya a star when Sicario came out, but he had a substantial part.) Blunt and Kaluuya were the audience surrogates in Sicario, playing FBI agents whose eyes went wide when they saw what C.I.A. spooks and U.S. Special Forces operators were being allowed to do in their guerrilla campaign against the drug cartels in Juarez and elsewhere. They were rule-followers, tough but by-the-book.

The book gets thrown out even earlier in Soldado, wherein the remaining stars from the first movie — sandal-wearing C.I.A. black-ops guy Matt Graver (Josh Brolin, in his third big movie role in two months) and mumbly attorney-turned-assassin Alejandro Gillick (Benicio Del Toro) — are ordered to unleash hellfire on the cartels after a drug lord is suspected of helping Muslim suicide bombers cross the border. This doesn't make a lick of sense: Why would a drug smuggler want any part of a crime that would be sure to produce tightened border security? When we later learn the bombers' true identities, it's treated as a blink-and-you'll-miss-it blip of exposition, not a huge plot point that undermines the supposed justification for all the indefensible deeds we've seen our antiheroes commit up to that point.

'Sicario: Day Of The Soldado' Is A Swaggering Sequel That's Short On Precision

In 'Black Mass' And 'Sicario,' The Collision Of Law And Violence

Anyway, Thanos and The Collector use their carte blanche to abduct the 16-year-old daughter (Isabela Moner) of a cartel kingpin in Mexico City, smuggle her into the U.S., and then pose as Drug Enforcement Administration agents to stage a fake hostage-rescue for the purpose of ... well, their motives are murky here. But artfully murky. The salient point is that once they're ambushed by a bunch of crooked but not especially bright federales and forced to return fire, the fallout of having Mexican cops gunned down by American operatives on Mexican soil turns out to be too much for the unseen American president, who— as in the 1994 Tom Clancy adaptation Clear and Present Danger and approximately 400 other narco-thrillers — pulls the plug on the operation and orders all evidence of it ... liquidated.

Taylor Sheridan, the prolific screenwriter of Sicario and the even better border-crime movie Hell or High Water, wrote the script to this follow-up. You can see him sweating mightily in the third act to juggle irreconcilable imperatives: To zig where Sicario zagged, to satisfy what feels like a studio-imposed mandate for more movies, and to persuade himself he's making something more poetic and tragic than just an amoral mood piece for violence junkies.

Italian director Stefano Sollima, in his (mostly) English-language debut, and Polish cinematographer Dariusz Wolski, whose Hollywood resume includes Ridley Scott's last half-dozen films, have opted to try to replicate the original's tense and brooding atmosphere as closely as possible, with a lot of help from Icelandic composer Hildur Guðnadóttir's dread-suffused score. (She's a frequent collaborator with Jóhann Jóhannsson, who scored the first film and passed away in February. Day of the Soldado is dedicated to him.) The performances, which include Matthew Modine as the Secretary of Defense and Catherine Keener as a nervous C.I.A. officer, are once again fully convincing, and the filmmaking is competent, with intermittent flashes of inspiration. Day of the Soldado might actually be the ultimate drug-war movie, in that it marshals the talents of a lot of good and well-intentioned people to an utterly futile end.