Accessibility links
The Election Of 2016 Is Nowhere Near Over, And Still Pulling Americans Apart Far from subsiding, the political animosities stirred by the tumultuous presidential cycle of 2015-16 grow more disruptive, remaking both our major parties and altering our public life as a nation. 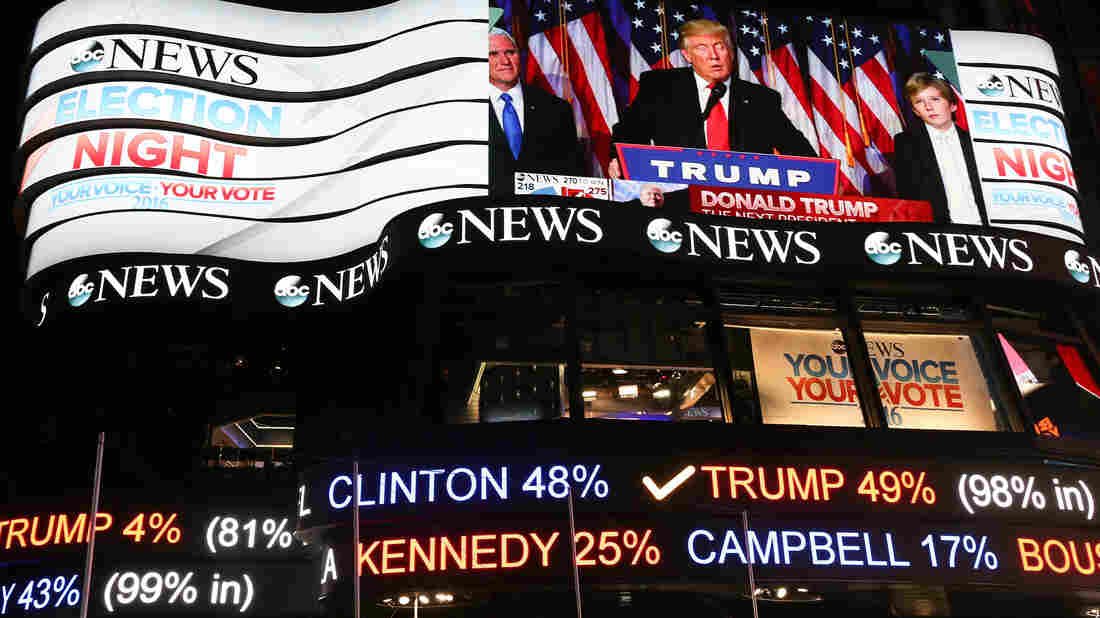 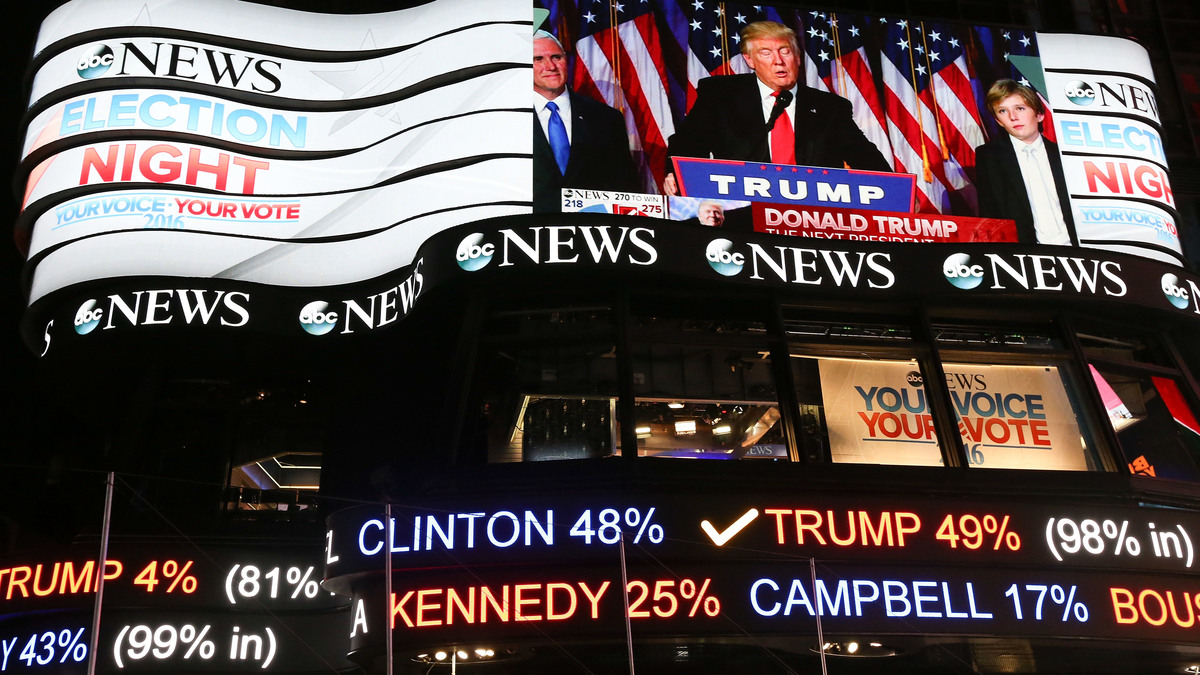 Justice Anthony Kennedy, known as the man at the center of the U.S. Supreme Court, could not have chosen a more appropriate moment to retire.

Kennedy had stood at the center of the court, with four colleagues predictably to his left and four predictably to his right. Sometimes he sided with one foursome; sometimes, with the other. His vote was the deciding one so often that other members of the court had joked, with minimal mirth, that they might as well stay home.

But today, it is increasingly difficult to find, or even imagine, a true center on the high court — or in our national politics generally.

Witness the fact that Kennedy himself came down consistently on the conservative side in the major cases announced in this Supreme Court term. Writing a cautionary note to President Trump while voting to uphold his travel ban does not a "swing justice" make.

Kennedy's rightward tilt included several issues the justice had been anticipating when he decided not to retire last year. He was turning 80 at the time, celebrating his 30th year on the court. Many thought he was tarrying so he could settle some big ones, such as extreme partisan gerrymandering, or to defend his same-sex-marriage landmark ruling from 2015.

As it turned out, Kennedy's ultimate year on the bench served mostly to arm those critics who said his reputation as a swing vote had always been exaggerated — based primarily in his support for gay rights and at least some degree of abortion rights.

Yet how fitting for him pick up his "decider" credentials and hit the exit in a week when evidence of our national polarization is all around us.

Incidents of Trump staff and Cabinet officers being hounded or refused service in restaurants have become a flashpoint between partisans, especially in the electronic and social media. But in fact, the decline in civility in our national political life has been evident for months, if not years.

And it is not just a war of words. Both parties are making decisions in this atmosphere that will shape national policy and politics for years.

A plea for support

On Wednesday, House lawmakers defeated what had been called a "compromise bill" on immigration. It did not represent a compromise between the parties but between the rival factions of the House Republican majority. It tried to address the contentious issues of family separation, legal status for DREAMers (brought to the U.S. illegally as minors) and the president's border wall all at once.

The bill had the strong backing of Speaker Paul Ryan and other House leaders. It was endorsed by President Trump, who put out an eleventh-hour plea for support. But fewer than half the Republicans in the House voted for it — an even more ignominious defeat than was dealt to a yet more conservative bill a week ago. Ryan is leaving the House this year, but the collapse of his efforts on immigration confirmed his lame-duck status.

On the same day, a key panel within the Democratic National Committee voted to restrict the power of superdelegates — voting delegates at the presidential nominating convention who hold that privilege as elected officials or party officers. It's been a pillar of establishment power in the system since the 1970s and was bitterly resented by supporters of frustrated candidate Bernie Sanders in 2016.

Both the House and DNC were voting as the news media were parsing and picking over the primary votes tallied the night before in eight states. From New York to South Carolina to Colorado, the big winners among Democrats were generally champions of the party's progressive left and its most loyal identity groups — including African-Americans, Hispanics and gays.

The breakout star was clearly Alexandria Ocasio-Cortez, a 28-year-old Sanders insurgent whose platform and persona inspired turnout in a Queens-Bronx district long dominated by the local Democratic machine. She defeated the county chairman, Joe Crowley, who had been in Congress for 20 years and who had stood a good chance of being the next Democratic leader in the House. 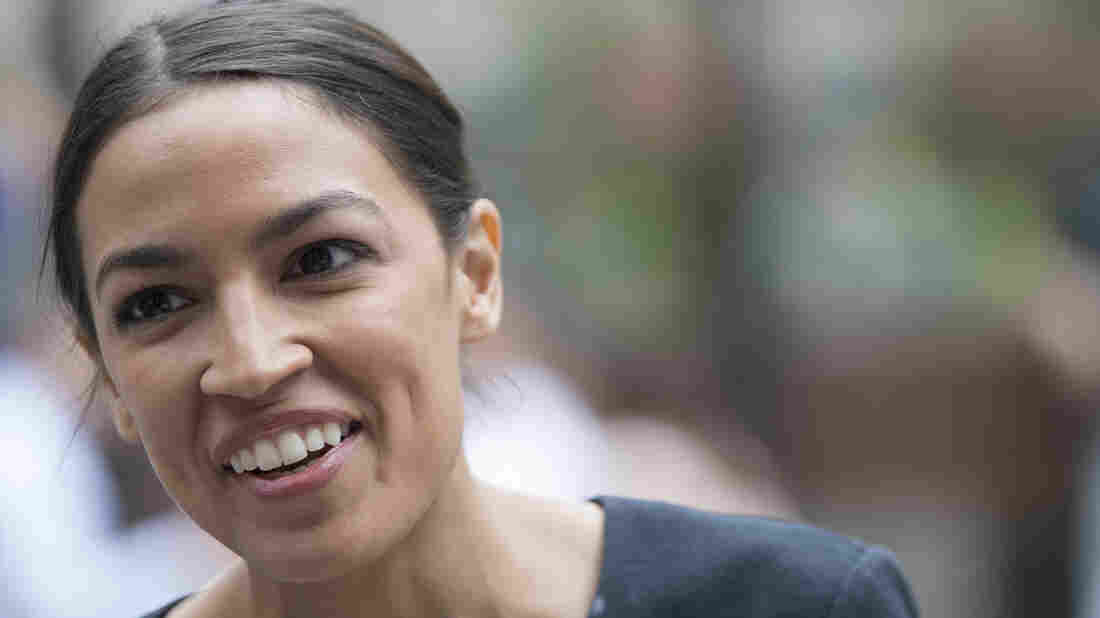 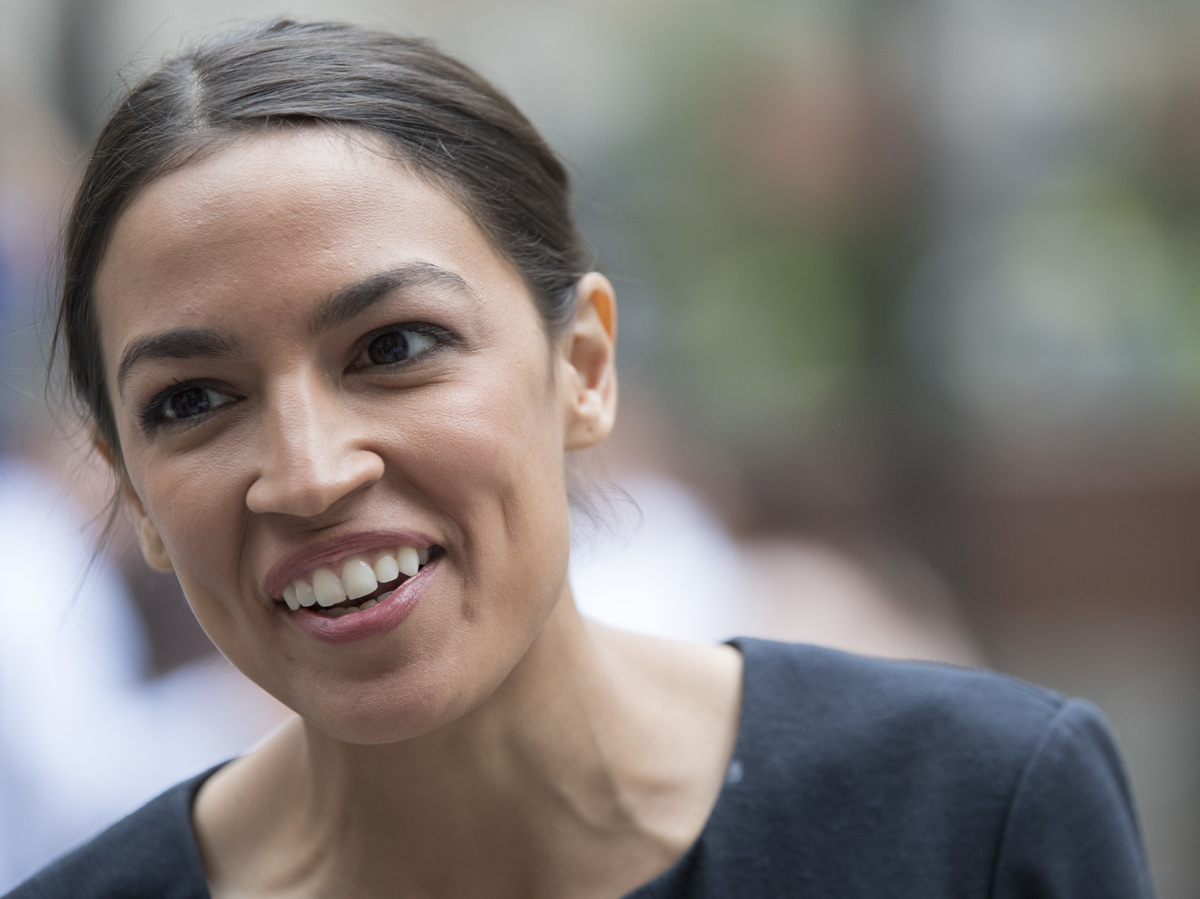 But there was also room in the liberal spotlight for former NAACP head Ben Jealous, nominated for governor in Maryland, and Jared Polis, a four-term Colorado congressman who could become the nation's first openly gay governor.

On the Republican side, the primary winners were nearly always those who had been loudest in their praise for the president or who had arm-wrestled rivals for Trump's support.

Exhibit A was South Carolina's Henry McMaster, who as lieutenant governor in 2015 had been the first statewide-elected official anywhere to endorse Trump. Last year, he succeeded Nikki Haley as governor when Trump appointed her ambassador to the United Nations.

Monday night, Trump was in South Carolina, embracing McMaster at a rally on the eve of a vote that saw McMaster hold off a strong primary challenger, 53 percent to 47 percent. 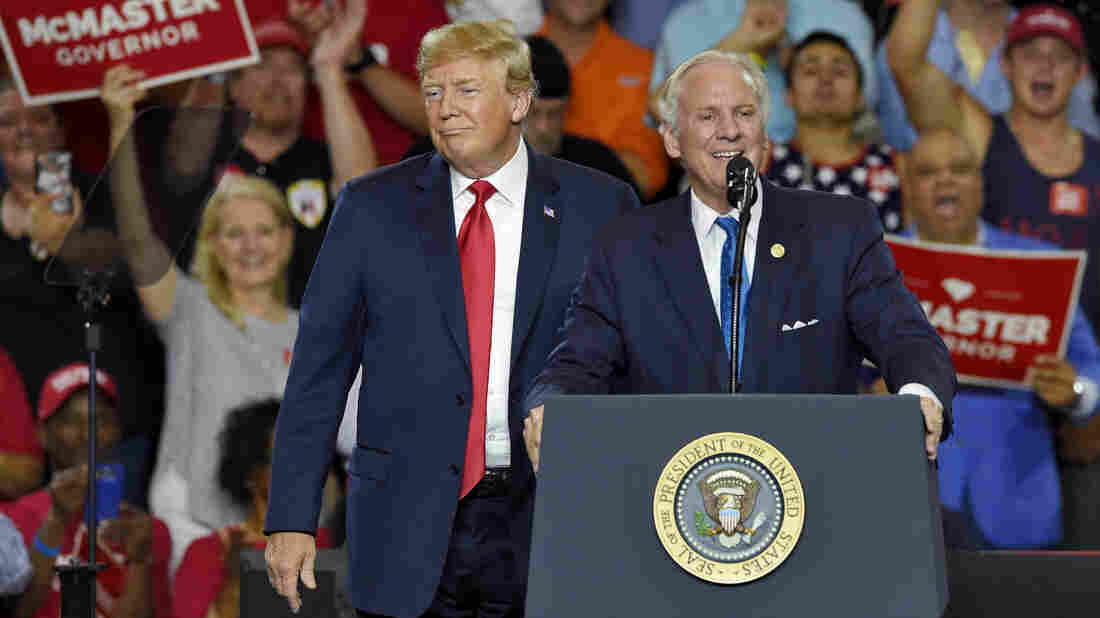 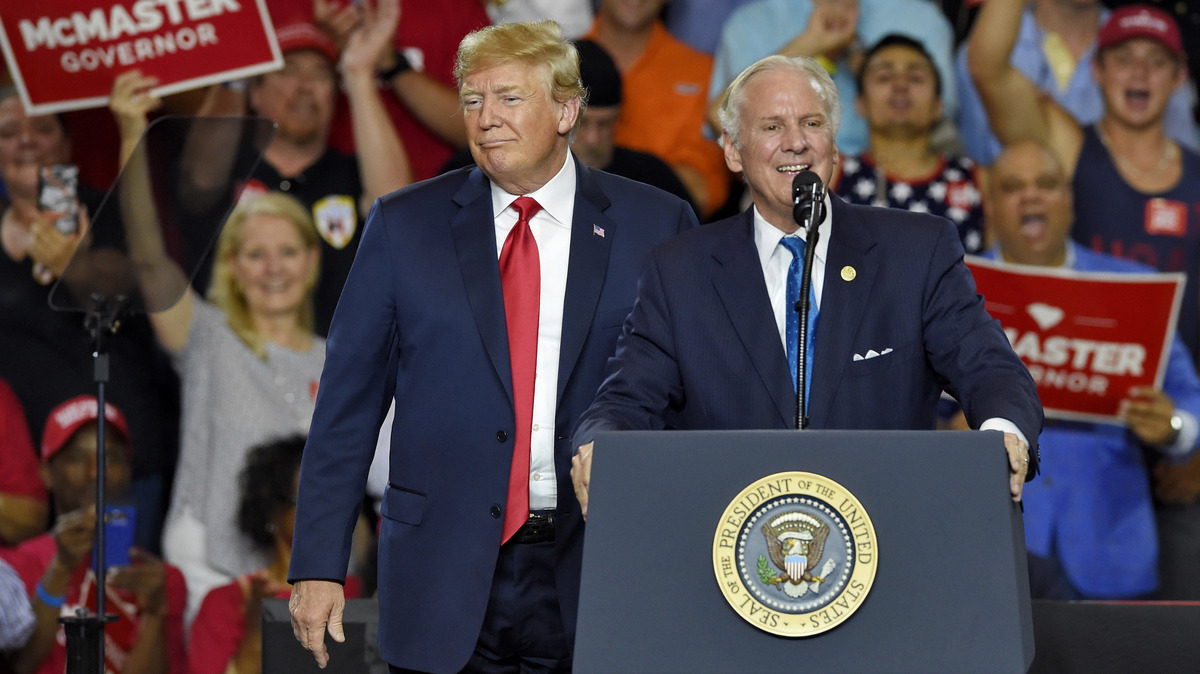 One exception to the Trump rule was Maryland Gov. Larry Hogan, a sometime Trump antagonist who did not have a primary opponent. More typically, those who had not been fans of the president found ways to make peace with him or at least back off.

That included Mitt Romney, who won the GOP nomination for the U.S. Senate in Utah. Romney had been a major leader of the NeverTrump movement in 2016 and has since criticized him sharply at times. But even he took pains in the campaign's last weekend to mend fences. His op-ed in a statewide newspaper dampened the notion he would lead intraparty opposition to Trump once in Washington.

Far from subsiding, the political animosities stirred by the tumultuous presidential cycle of 2015-16 have grown more disruptive. Whether you call the agents of change activists or populists, they are remaking both our major parties and altering our public life as a nation.

At times at least, such voters tell pollsters they want compromise. But the candidates they actually vote for are promising something else.

No surprise, then, that as activists displace the traditional or establishment elements of each party, the two parties are moving further apart. The middle — the political center where most Americans have tended to feel comfortable — is fast being abandoned.

That matters because the center is where past generations of leaders have been able to find consensus and effectuate change that lasts.