Accessibility links
What Justice Kennedy's Retirement Means For Abortion Rights Advocates on both sides of the abortion debate agree that the retirement of Supreme Court Justice Anthony Kennedy sets the stage for a battle over abortion rights unlike any in a generation. 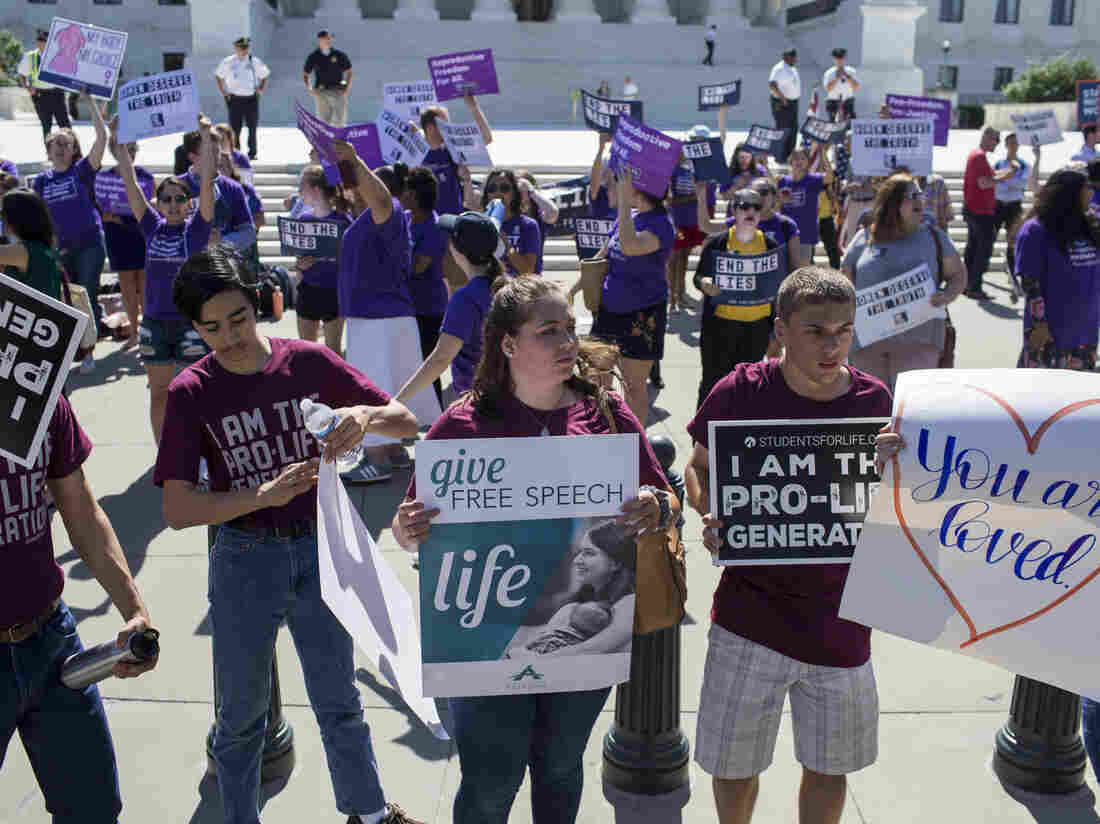 Abortion-rights supporters and foes rally at the Supreme Court on Monday. Almost as soon as Justice Anthony Kennedy's retirement was announced, several anti-abortion-rights groups began their campaigns to influence the pick for his successor. Zach Gibson/Getty Images hide caption 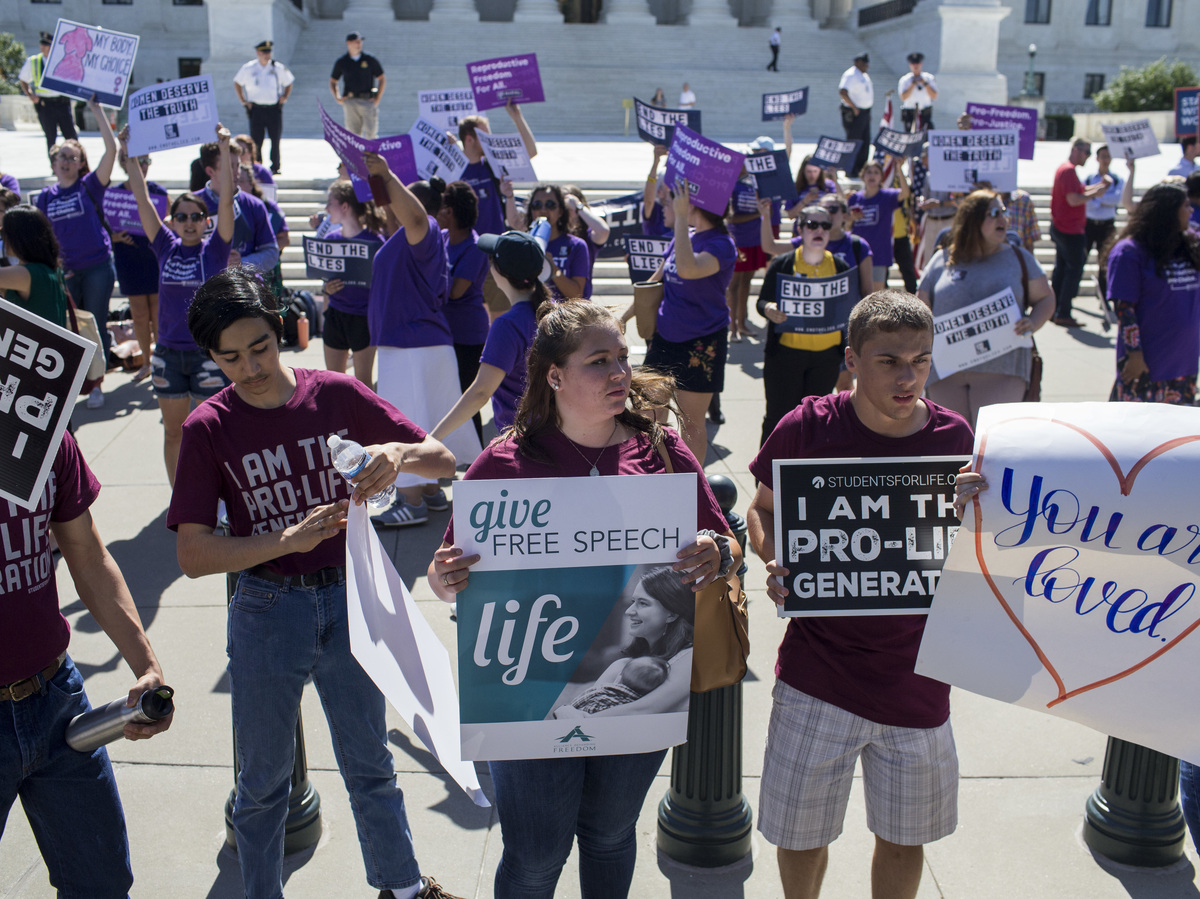 Abortion-rights supporters and foes rally at the Supreme Court on Monday. Almost as soon as Justice Anthony Kennedy's retirement was announced, several anti-abortion-rights groups began their campaigns to influence the pick for his successor.

The process of replacing retiring Supreme Court Justice Anthony Kennedy is underway, and the prospect of filling the seat held by the court's swing vote is setting the stage for what is likely to be a battle over abortion rights unlike any in a generation.

On Thursday evening, President Trump met with six key senators likely to be targeted by intense lobbying efforts from both sides of the abortion debate. Among them were Republicans Susan Collins of Maine and Lisa Murkowski of Alaska, who have supported abortion rights in the past and will face heavy pressure from reproductive-rights advocates to vote against the confirmation of any nominee seen as likely to roll back abortion rights. Trump also met with Sens. Joe Manchin of West Virginia, Heidi Heitkamp of North Dakota and Joe Donnelly of Indiana; all three are red-state Democrats seeking re-election this fall and likely to face pressure to side with Republicans.

As the 2016 presidential campaign wound down, then-candidate Donald Trump made clear that if elected, he would work to see an end to the Roe v. Wade Supreme Court decision on his watch.

"If we put another two or perhaps three justices on, that's really what's going to be, that's what will happen," Trump said at the final presidential debate in October 2016. "And that will happen automatically in my opinion, because I am putting pro-life justices on the court."

But the 1973 Supreme Court decision that legalized abortion nationwide won't be overturned automatically, nor without a fight.

Speaking to reporters on Thursday, White House spokeswoman Lindsay Walters said the president "has begun" the process of finding Kennedy's replacement and that he will choose a nominee from one of the lists of potential justices he has previously released. Trump initially released the names of his potential Supreme Court picks during the 2016 campaign in an effort to firm up support among social and religious conservatives and added additional names last year.

Walters told NPR's Scott Horsley that Trump will announce a pick "within a few weeks."

Kennedy's departure will usher in a fight for the future of the Supreme Court that many social and religious conservatives anticipated and hoped for during the 2016 campaign. Trump's promise to appoint conservative, anti-abortion justices helped turn out the base voters he needed to secure his surprise victory. Exit polls suggested the makeup of the Supreme Court played a major role for many voters on both sides, but more for Republicans.

"We're the closest we've ever been to overturning Roe v. Wade," a woman says in a video released online by the group Students for Life of America shortly after the news broke.

In an interview with NPR, Students for Life President Kristan Hawkins called the retirement of the court's swing vote "a day that we've been waiting for."

"Our goal in the pro-life movement has always been to make abortion illegal and unthinkable," Hawkins said. "So we want Roe to be overturned ... and we expect that."

"He has been a crucial vote in landmark reproductive rights cases," Northup said.

"[I'm] extremely concerned," said Helene Krasnoff, vice president of public policy, litigation and law at Planned Parenthood Federation of America. "President Trump has been making good on his threat to stack the courts with those who are opposed to safe, legal abortion, and we can only expect that he'll nominate another extreme opponent." 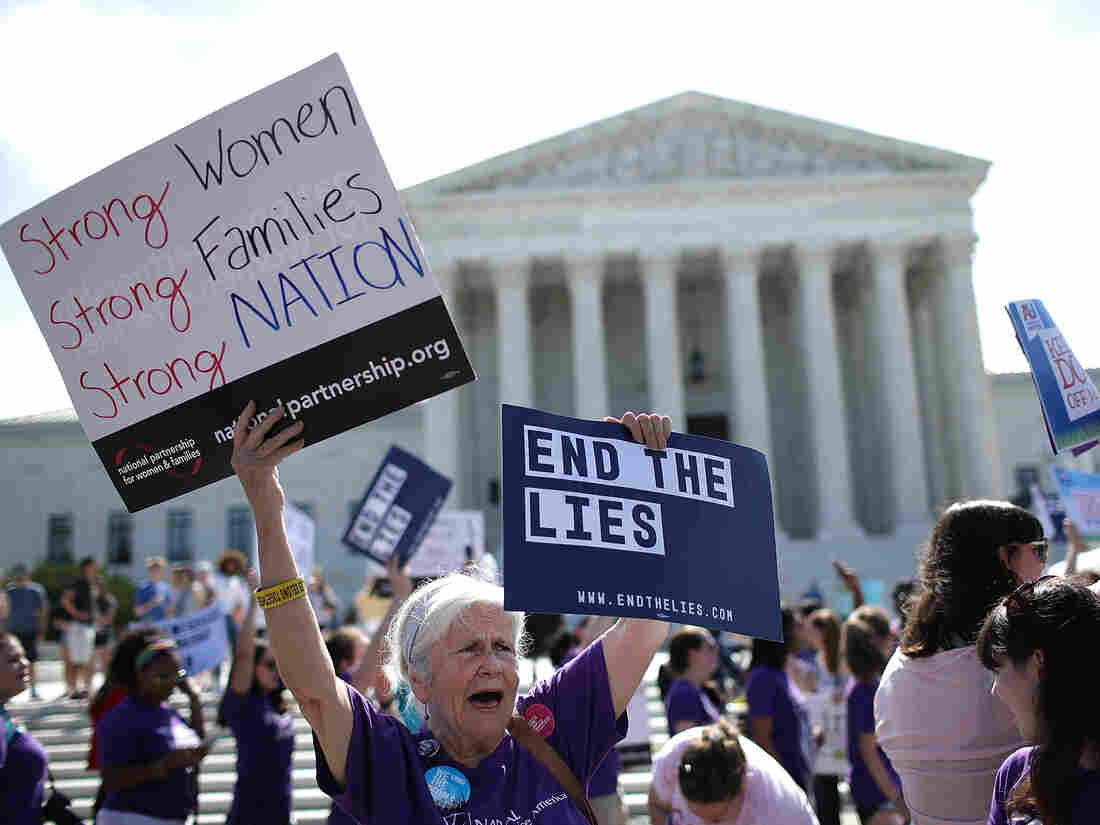 Abortion-rights proponents protest outside the U.S. Supreme Court on Tuesday. The retirement of Justice Anthony Kennedy set the stage for a battle over abortion rights unlike any in a generation. Win McNamee/Getty Images hide caption 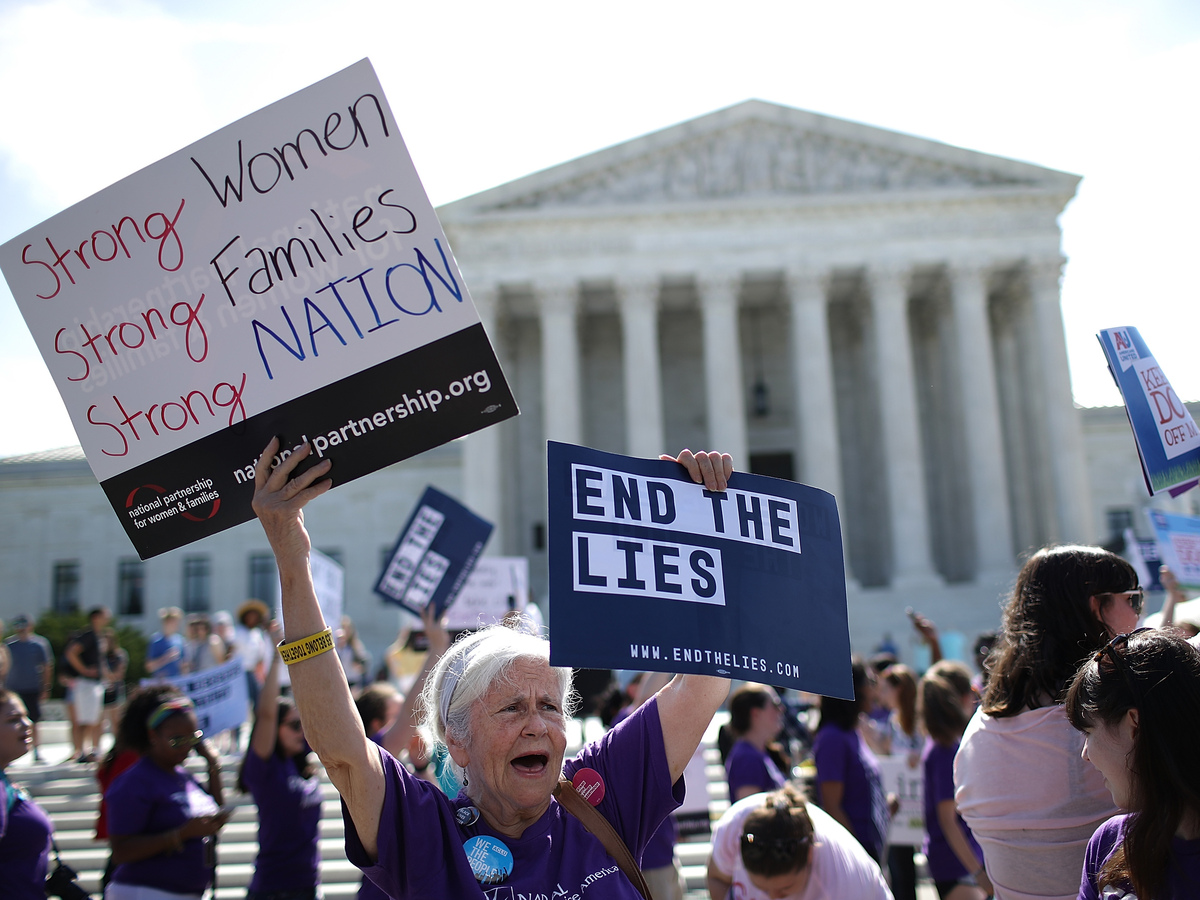 Abortion-rights proponents protest outside the U.S. Supreme Court on Tuesday. The retirement of Justice Anthony Kennedy set the stage for a battle over abortion rights unlike any in a generation.

A fight for Kennedy's replacement

Both sides are gearing up for a confirmation battle in the Senate after Trump names his nominee.

Republicans have a narrow, 51-seat majority, and all eyes will be on a handful of Republican senators who have been supportive of abortion rights and on red-state Democrats facing re-election in November. Senators in each group will be under pressure to come over to the other side of the aisle.

"It's gonna be epic," said Marjorie Dannenfelser of the Susan B. Anthony List, which works to elect candidates who oppose abortion rights. "It will be cast as a pretty pivotal vote on the court on this issue and many, many others. ... We've been preparing for this fight for a very long time."

Hawkins said her group has more than 1,200 chapters around the country, and organizers will encourage members to lobby their senators during the confirmation process.

Krasnoff, of Planned Parenthood, said abortion-rights advocates also will be lobbying senators to vote against any nominee seen as likely to overturn Roe.

Speaking outside the Supreme Court on Thursday, Ilyse Hogue of NARAL Pro-Choice America urged abortion-rights supporters to reach out to lawmakers.

"This is about all 100 senators hearing from people on a daily basis that they do not want people, women, families, criminalized," Hogue said.

While polling on abortion is difficult and yields mixed results depending on how the questions are asked, multiple polls suggest a majority of Americans believe abortion should be legal in at least some cases, particularly in early pregnancy.

If Trump is successful in pushing through a nominee who is likely to overturn or erode Roe, the fight over the future of the decision could play out in several ways.

Northup, of the Center for Reproductive Rights, said restrictive laws recently passed by several states could work their way to the Supreme Court. She points to what is known as a "heartbeat bill" in Iowa, where state lawmakers recently approved one of the strictest abortion laws in the nation.

The law, which is being challenged in the courts, bans the procedure after a heartbeat can be detected, which is often before a woman knows she is pregnant. Other states, including Mississippi and Louisiana, have banned abortion at 15 weeks' gestation, and others have prohibited specific methods.

"I think it's going to be the early cutoff dates for abortion that you're gonna be seeing going up to the court that could challenge Roe v. Wade, because Roe v. Wade and its cases that have followed have made clear that before the time of fetal viability it's for the woman and her doctor to make the decision," Northup said. "And these states have been passing laws trying to radically change that."

Back to the states

At the final presidential debate in Las Vegas, Trump promised that if Roe is overturned, "It will go back to the states and the states will then make a determination."

That's true, and it's the goal of many abortion-rights opponents, some of whom downplay the idea that abortion could become illegal nationwide.

"Without question, our goal is to overturn Roe v. Wade so that states are allowed to enact their own wills into law," said Dannenfelser, of the Susan B. Anthony List.

But states have a patchwork of laws, with red states tending to pass more restrictive abortion ones.

Alexis Cole, an attorney and policy director at Unite for Reproductive & Gender Equity, said 17 states already have laws on the books that would heavily restrict or ban abortion if Roe were overturned. She notes that because of restrictive laws and limited access to abortion, women in many states already struggle to obtain the procedure, even under Roe.