Accessibility links
Hundreds Arrested Protesting Trump Administration's Immigration Policies Protesters marched through Washington, D.C., on Thursday to fight for families separated at the southern border. It was one of several demonstrations around the country. 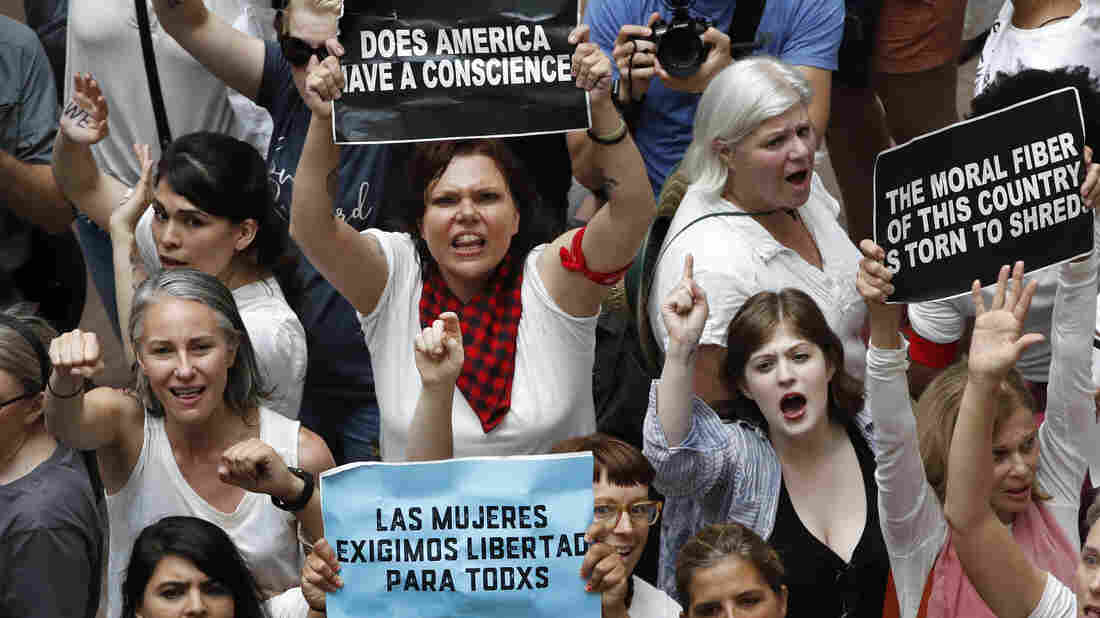 Women hold signs as they protest the separation of immigrant families inside the Hart Senate Office Building on Capitol Hill in Washington. Jacquelyn Martin/AP hide caption

Nearly 600 women were arrested Thursday in one of several demonstrations across the country protesting the Trump administration's treatment of migrant families at the southern border.

Organized by the Center for Popular Democracy Action and the Women's March, a group that spearheaded the original Women's March in January 2017, the demonstration in Washington, D.C., sought to end family detention, create an immediate process for family reunification, and abolish the U.S. Immigration and Customs Enforcement (ICE).

Protesters marched past the Justice Department then staged a sit-in at the Hart Senate Office Building where they chanted, "What do we want? Free families!" and "This is what democracy looks like," among other things, according to The Associated Press.

About 575 people were arrested and charged with unlawfully demonstrating inside the building, AP tweeted, including Rep. Pramila Jayapal, D-Wash., who said she was "proud to have been arrested with them."

I was just arrested with 500+ women and @WomensMarch to say @RealDonaldTrump’s cruel zero-tolerance policy will not continue. Not in our country. Not in our name.
June 30 we’re putting ourselves in the street again.

Mrinalini Chakraborty, head of Field Operations and Strategy for Women's March, said the demonstration was a strategic decision by the organization to motivate change.

"A mass act of nonviolent civil disobedience seems like the right approach right now to send shock waves through the system," Chakraborty said. "Marching is not enough anymore."

The decision to risk arrest is one that Chakraborty says is necessary to the movement.

"It's time for us to sacrifice, to put our bodies on the line, because I don't want to be one of those people 30 years later when we look back on this time thinking what was I doing then," Chakraborty said. "I want to be able to say that I fought like hell and that I did everything in my power to protect the marginalized."

Yatziri Tovar knows what it feels like to be marginalized. A Deferred Action for Childhood Arrivals (DACA) recipient, Tovar felt a moral responsibility to stand in solidarity with the families at the border and to stand up for their rights.

"I know what it feels like to have that fear of being separated from your family," Tovar said. "We're going to be fighting until these families are reunited, fighting until families are no longer detained, and also for the defunding of ICE so they stop targeting our communities."

Deborah Harris is the state coordinator for the women's march in Nevada. She traveled to D.C. to march for all the people that could not march themselves.

"You have to act while you still have the freedom to act," said Harris. "You don't have to be in my family for me to care. You don't even have to be my neighbor. It's about our human rights."

In Brownsville, Texas, several hundred people rallied in front of the federal courthouse to protest the administration's family separation policy. Brownsville is a border city on the Rio Grande River across from the Mexican city of Matamoros.

The event drew protesters from all over Texas, including educators and church activists. 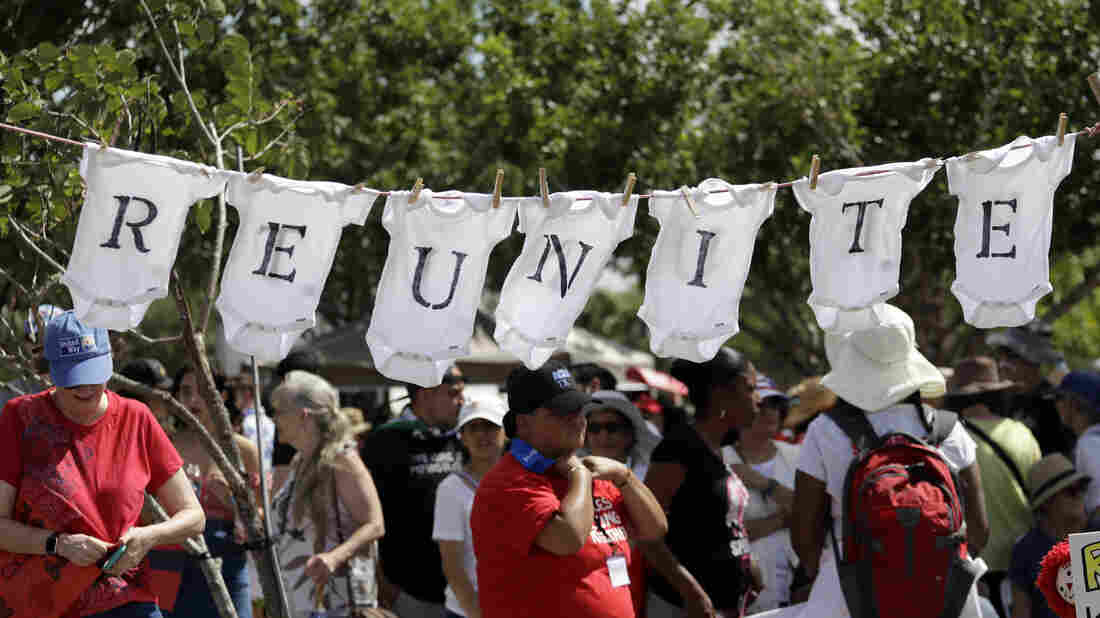 Protesters use baby cloths to display a message during an immigration really across from the federal courthouse in Brownsville, Texas on Thursday. Eric Gay/AP hide caption

Ellie Moseman, a retired executive secretary from Rio Honda attending the first public protest in her life, said she was especially opposed to the plans to detain immigrants on military bases.

"Horrible, horrible. And it's for an indefinite time period. So mothers and children now are going to be detained together for how long" she asked.

The rally was sponsored by the American Civil Liberties Union.

Faiz Shakir, national political director for the ACLU, said the group would oppose the housing of migrants on military bases.

Talia Wiener is an intern on NPR's National Desk.

A previous version of this story misspelled Faiz Shakir's first name as Faz.