Accessibility links
Working The Night Shift For Mexico City's Bloody Crime Tabloids Reporting on crime for sensationalist media in the Mexican capital reveals the dark side of a city where officials have tried to keep the crime problem under wraps. 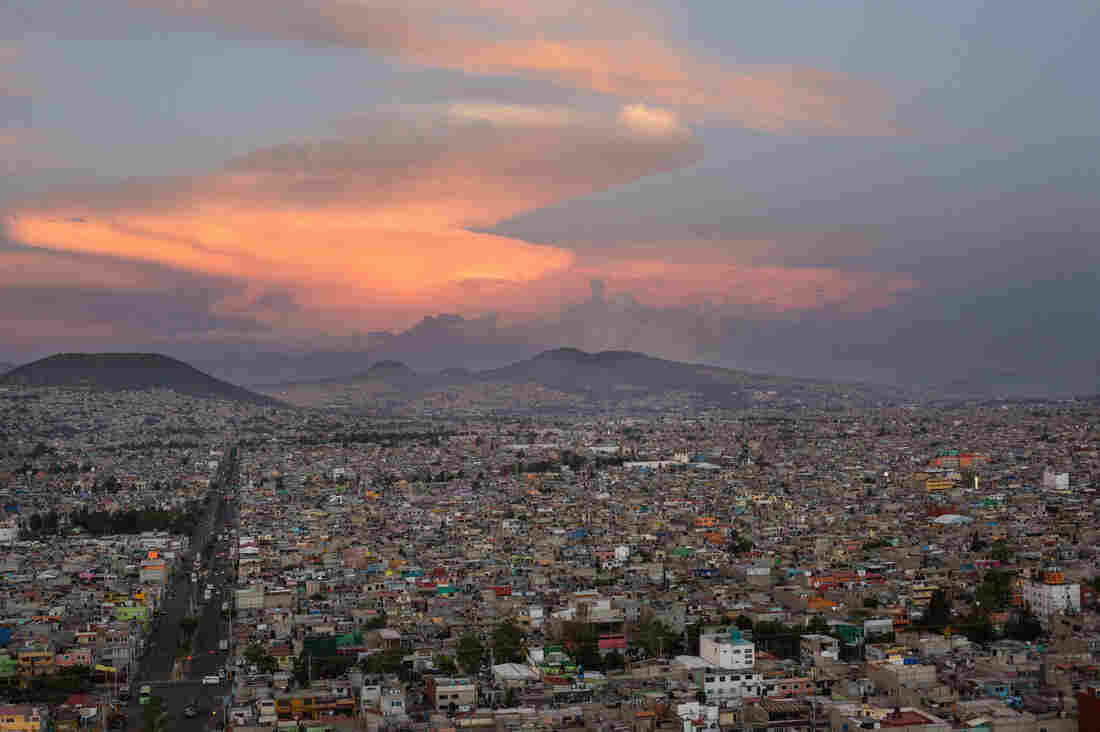 An aerial view of Mexico City, seen from Coyote 1, a helicopter used by the local police force. This visual work focuses on violence in the Mexican capital in recent years. Brett Gundlock/Boreal Collective hide caption 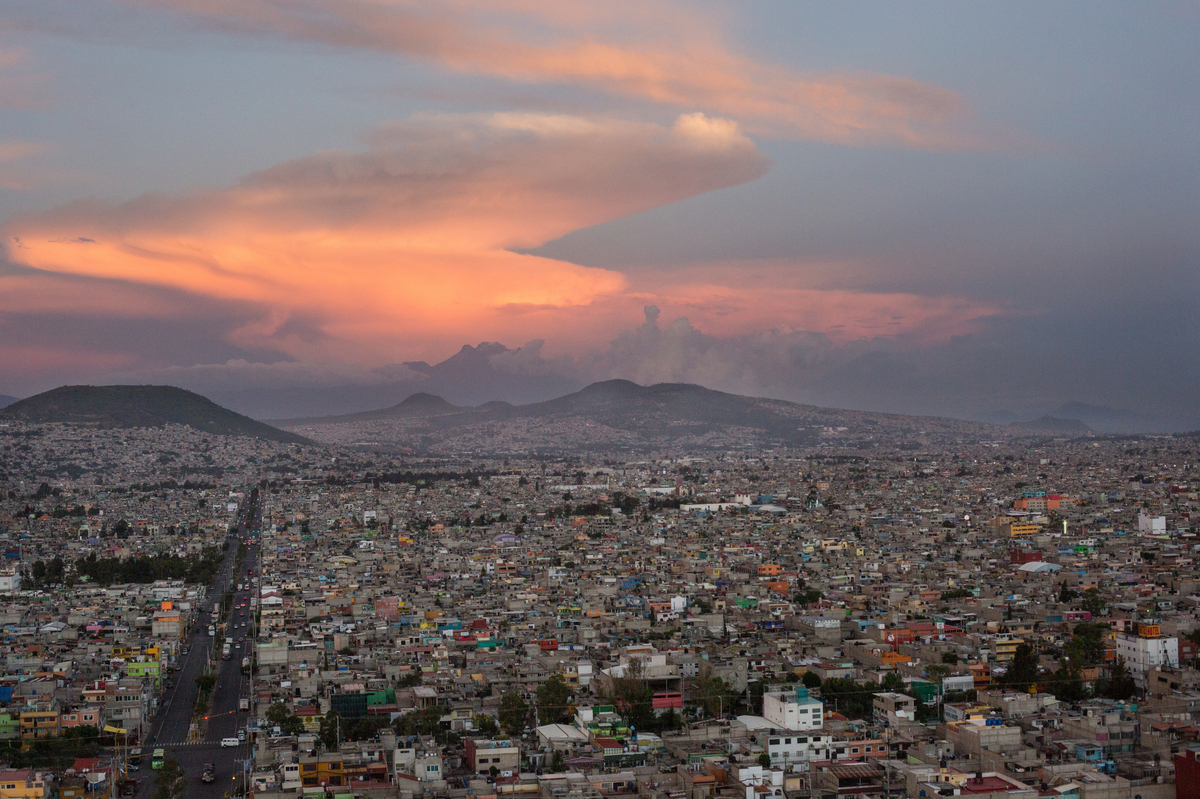 An aerial view of Mexico City, seen from Coyote 1, a helicopter used by the local police force. This visual work focuses on violence in the Mexican capital in recent years.

A white sheet glimmers under a fluorescent street lamp. David Alvarado tiptoes around police tape to get another angle.

A crumpled figure is hidden under the sheet. A corner soaks up blood. Just a wrinkled, petite, brown hand hints at the identity of the deceased.

Staring into the face of death is pretty humdrum for Alvarado after three decades reporting in Mexico City.

"I've seen everything over the years," he says. "The crime has to be really serious to surprise me." 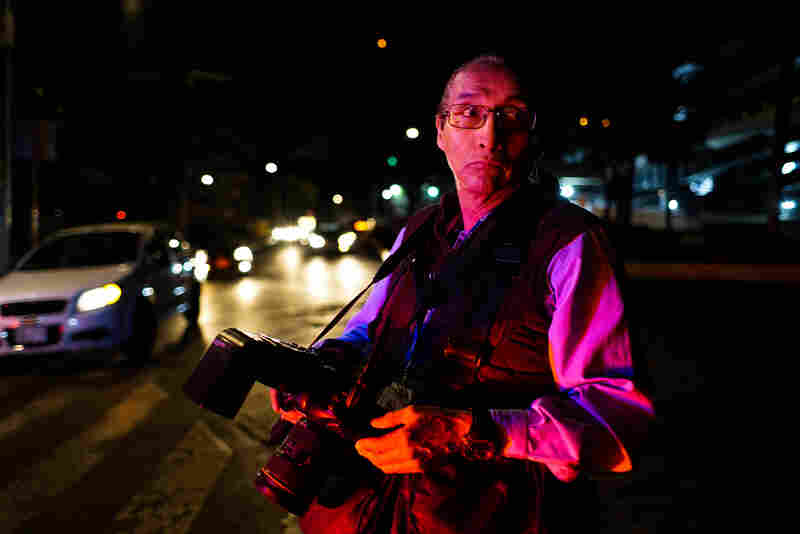 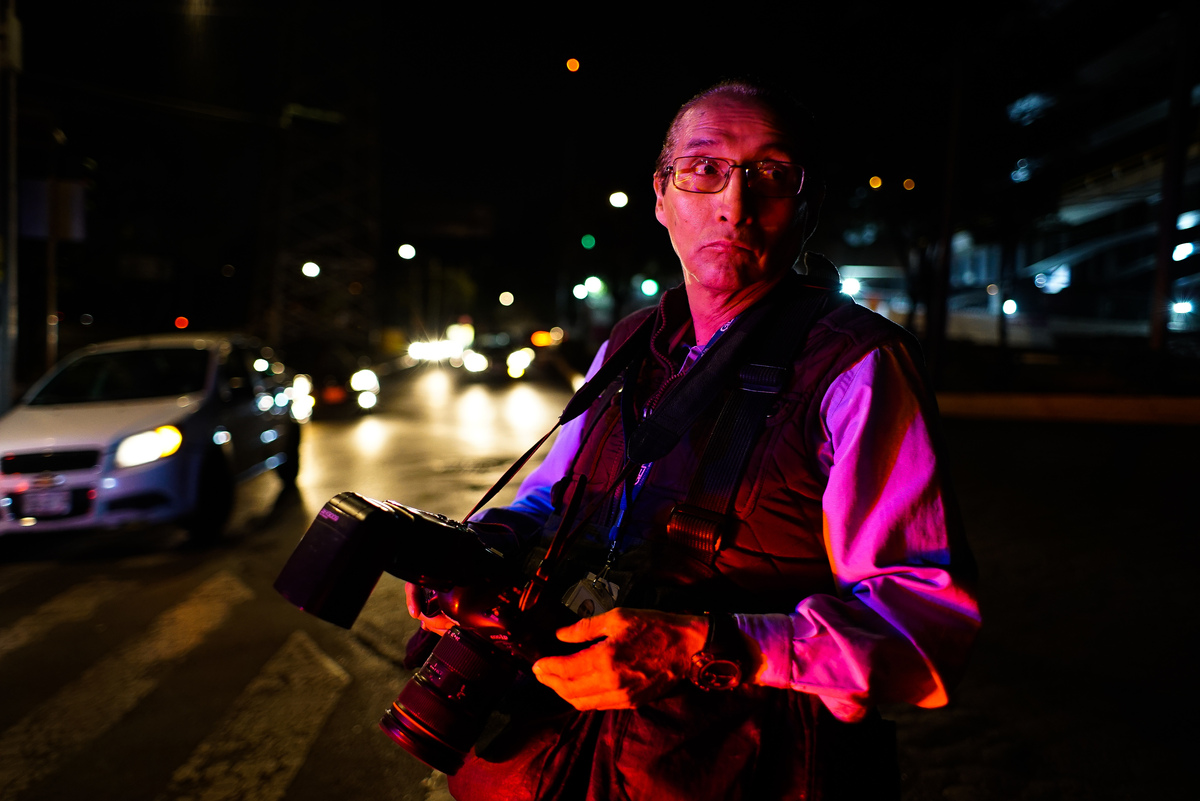 Alvarado, 60, works for a genre known in Mexico as la nota roja, meaning "red news," the country's crime-blotter tabloids. In much of the country, serious journalists deride the genre as sensationalist. But in the capital and surrounding areas, the papers are taking on unique importance. As organized crime becomes more widespread, splintered and confusing, some researchers say the constant stream of crime stories they produce is a critical source for understanding Mexico's violence as it hits all-time highs.

At the crime scene, Alvarado, whom everyone calls Gama, has all the photos he needs, but he doesn't leave yet.

"The police say she fell from the curb and died but I don't think so," he says. The curb a few feet from the corpse is just over a foot high. So Alvarado plans to stay until forensics arrives. He sees this as part of his job as a reporter on the crime beat's night shift.

Long overdue, crime scene investigation technicians arrive to take away the body. Alvarado recognizes one of the techs and rushes over hoping for clues about the cause of death. A moment later, he comes back with an answer.

"He said she showed signs of having been run over by a car, so that's what we'll run," he says.

Ordinary scenes of death like this are grunt work for Alvarado. But as he drives through the Mexico City streets on a recent night with NPR riding along, his phone lights up, and he does too.

A text message says there's been a homicide with a firearm. This is the kind of action that makes him speed and swerve through the light 2 a.m. traffic.

The text is on a WhatsApp group reporters use to chase crimes. Nowadays, ambulance drivers are their main sources for crime scenes, as police have largely shut them out, Mexico City journalists say.

On a major north-south artery of the city, a parade of cop car lights beckons. The scene grows ominous: Police tape wraps around a funeral home. Alvarado quickly double-parks and hops out. One of his colleagues walks over to him.

"Put everything away," he says. "There's a s*** ton of cops, family, maybe some people armed. Just wait."

Sliding through the crowd of cops, he gets a clearer view of the crime scene. The bodies of two men lie in pools of blood. Shell casings cover the ground.

One of the victims looks young, a teenager. A woman crouches next to his body, obsessively stroking his arm while she weeps.

Alvarado holds his camera and dances around bystanders and possible relatives and friends of the victims, looking for the right angle. He keeps a low profile because he knows his genre's reputation: The gory, uncensored photos of deceased will plaster newsstands across the city the next morning.

Alvarado works for a nota roja paper called ¡Pásala! ("Pass It On!")

"If you have blood, the more blood the better," says Sandra Vera Zambrano, a journalism professor at the Ibero-American University in the capital. "It has to be very bloody and very dramatic."

A murder is good for these papers. A lovers' quarrel turned homicidal: even better.

They combine the city's daily gore with full nude spreads of models and sports scores. Tacky headlines rival The New York Post. One of the most memorable for Vera was "Moronga de Ratón" — "Rat Blood Sausage." The grisly photo behind it showed an alleged thief whose guts were spilling onto the street after being run over by a truck.

Beyond the graphic imagery, these papers embrace a simplistic view of crime. Articles often smear the dead as thieves and criminals, based on nothing more than a single witness statement. Reporters rarely follow up on crimes or dig into the context behind them.

Despite its problems, Vera says, the genre plays an important role in Mexico City.

Iván Huerta sells la nota roja in a subway station, transited primarily by working-class Mexicans, and he reads the papers while he works.

"They report all the crimes happening in our area, things mainstream newspapers don't cover," he says.

"They really know how to play with the line on good taste and bad taste," says Vera. "If you think of it from a bourgeois point of view, it's really bad taste. But if you think of it in terms of economic logic, it's just perfect."

The drive for sales comes at a cost, which often includes what critics consider a crass disregard for victims and their families.

"I always think about the families of the dead," says Laura Villagómez, 54, a Mexico City resident standing next to one of the city's newsstands. She says she has never bought a nota roja paper. She had to avert her children's eyes from newsstands when they were young.

"I don't think it's OK these newspapers take advantage of death and people's grief. They should respect the dead," she says.

"People are morbid," he says. "If they didn't want to read and see this, I wouldn't have a job."

Once thought of as oasis from violence 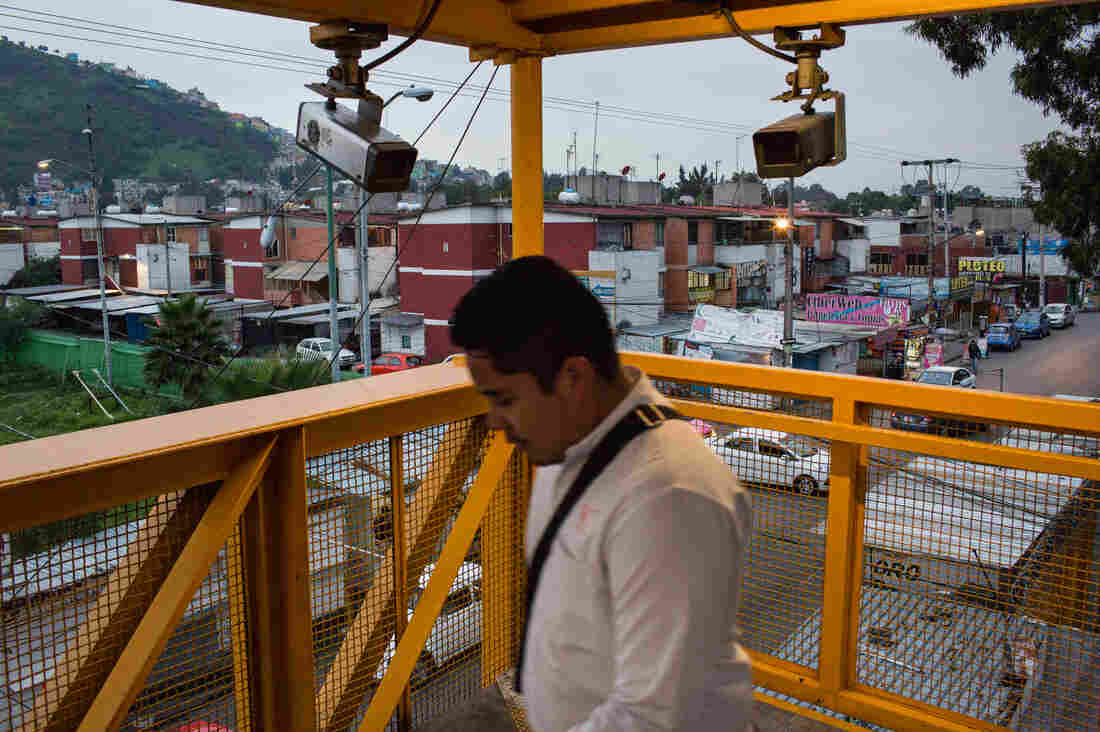 A man walks by security cameras in the Guelatao Metro station in Mexico City. The cameras are operated by Mexico City Public Transit. This is part of a larger visual project focused on violence in the Mexican capital. Brett Gundlock/Boreal Collective hide caption 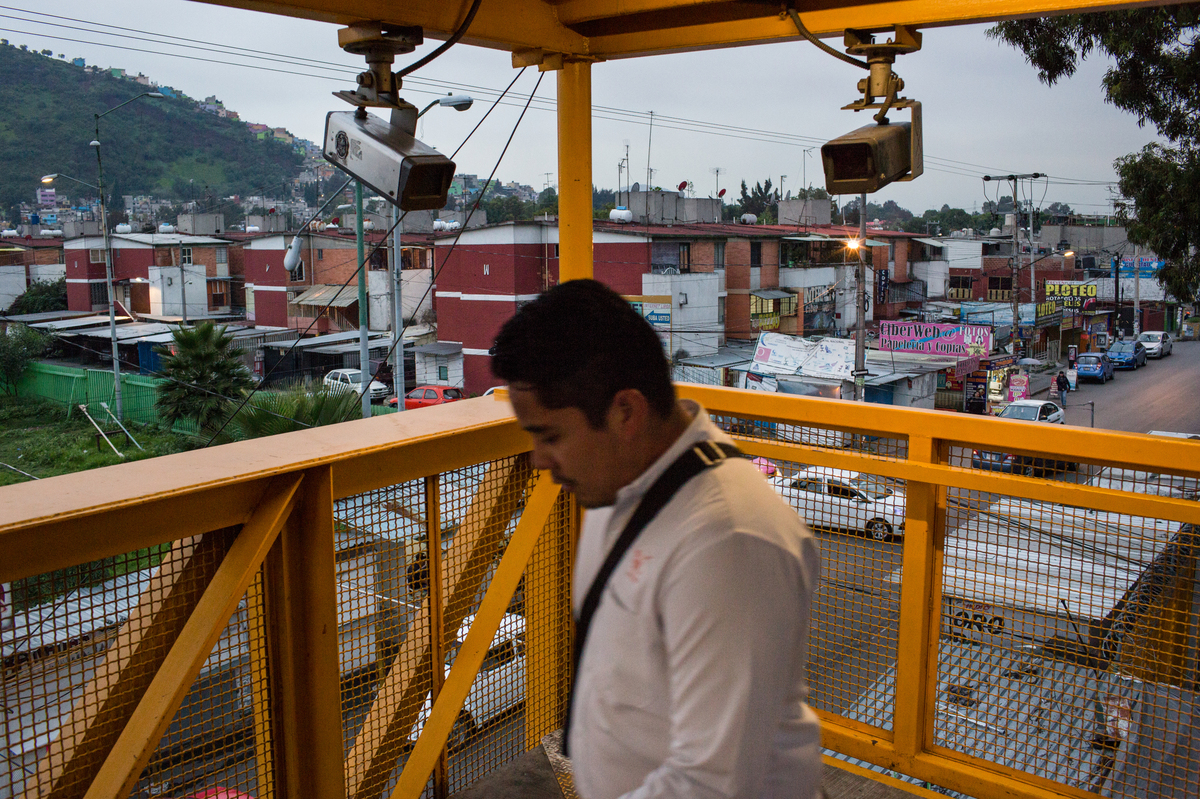 A man walks by security cameras in the Guelatao Metro station in Mexico City. The cameras are operated by Mexico City Public Transit. This is part of a larger visual project focused on violence in the Mexican capital. 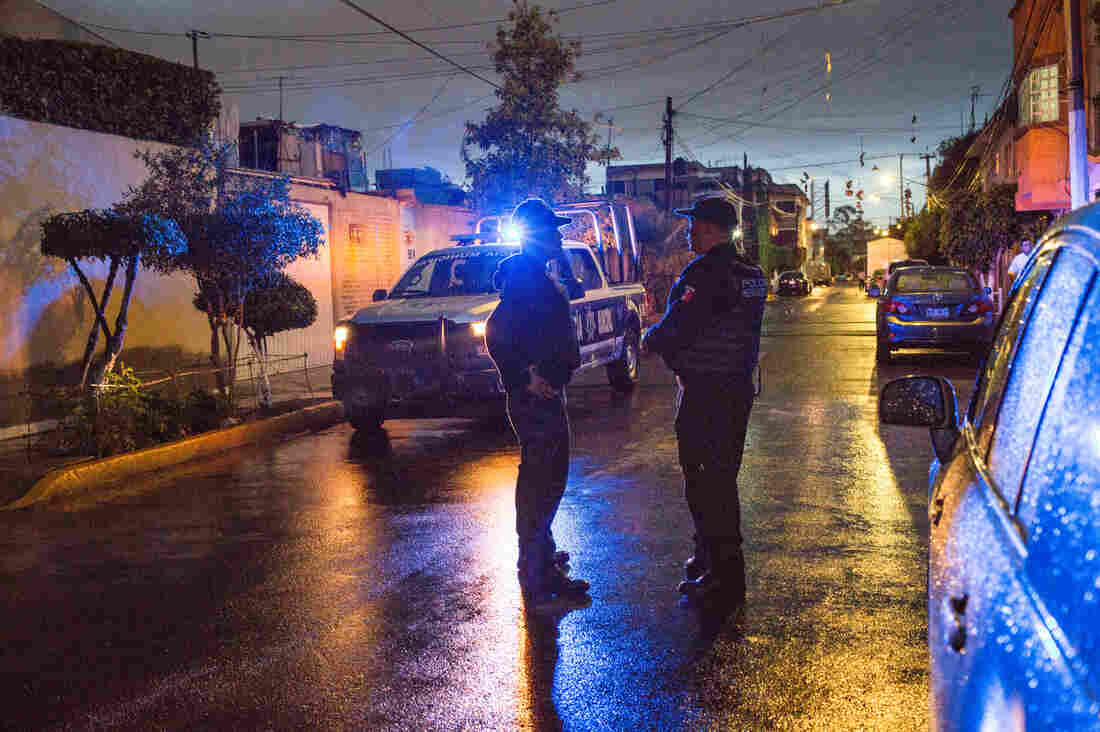 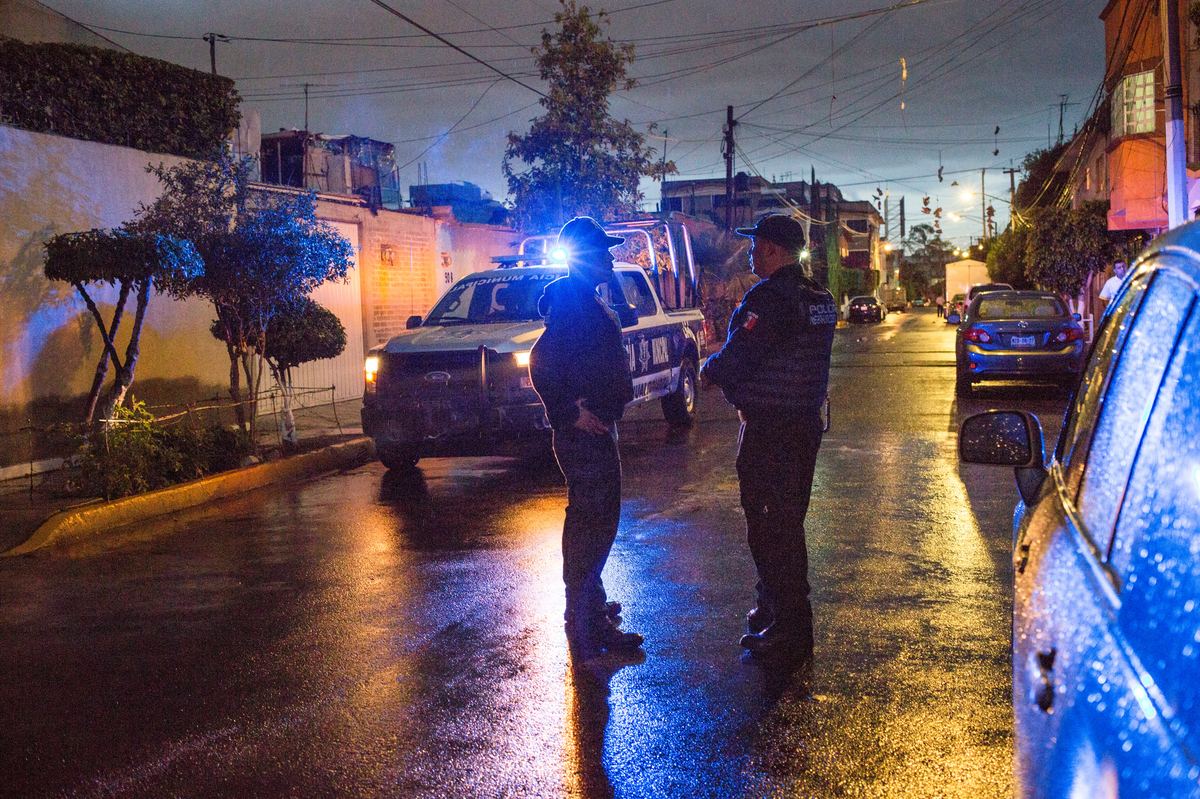 Alejandro García (left) and Agustin Ricardo Anaya, members of the local police force, investigate a stolen vehicle in the state of Mexico, part of the greater metropolitan area of Mexico City, in August 2017.

But this night's double homicide at the funeral home is a sign of Alvarado's value on the crime beat: He is a witness to the rise of organized crime in the Mexican capital.

For most of Mexico's drug war that started in late 2006, Mexico City has largely remained a tranquil bubble apart from the mayhem that has befallen cities like Acapulco, Ciudad Juárez or Monterrey at different moments. But it looked like that might be changing in July 2017 when, in a first for the Mexican capital, masked marines stormed into a southern borough and took down Felipe de Jesús Pérez Luna, the most powerful narco in the city, in a vicious gunfight.

Mayor Miguel Ángel Mancera insisted this wasn't cartels or organized crime, but rather a one-off fight with a simple drug dealer. Many residents laughed that off as a major understatement.

With the Tláhuac cartel falling, other cartels are violently fighting their way in.

In February and May, the Jalisco New Generation cartel hung banners, known as narcomantas, to state their presence and make threats. At least two rival narcos threatened in them have since been killed. Another banner in June, left with two mutilated bodies, appeared to be retaliation against New Generation.

With 1,085 killings in 2017, Mexico City registered a homicide rate of 12 per 100,000 people — its highest since records began in 1996 and dangerously close to the national average. As of May this year, homicides in the capital were up an additional 18 percent compared with the first five months of last year.

Back at the funeral parlor crime scene, Alvarado gets news apparently pointing to organized crime: Police count at least 22 shell casings on the scene, even though witnesses say shooting lasted no more than a few seconds.

"These types of murders with an assault rifle are more common now," he says. "But a few years ago, you would never see a gun like that here. Nothing more than pistols before that."

All of these details Alvarado writes in his story hold tremendous value for people who study organized crime.

"Nota roja papers have a very local focus and the reporters have very specific knowledge," says Víctor Sánchez Valdés, a professor at the Autonomous University of Coahuila in northern Mexico. "They tell very detailed stories in a way mainstream newspapers don't."

At many crime scenes, assailants leave a note or a message. Crimes may be focused in a strategically important location. Certain cartels display recognizable tactics. And nota roja reporters, writing in a simple style, say they aim to always tell the basic facts: who, what, where, when and how — the why can be a bit trickier.

As part of a series mapping organized crime, Sánchez combed through thousands of articles to find mentions of organized crime. Since la nota roja's job is to list details of a crime scene — and rarely includes wider context or analysis — it's a great source for this academic. When he found two independent sources citing organized crime in the same municipality or borough, he would count it as a match.

Under this methodology, Sánchez's mapping concluded that in 2017, 14 cartels or gangs were operating in and around Mexico City, up from nine in 2014. And they aren't just puny pushers in a single neighborhood: The Sinaloa cartel, the Jalisco New Generation cartel, Los Zetas and the Michoacán family all operate in multiple boroughs of the capital.

"The trend with authorities is to minimize the problem," says Sánchez. "But knowing and acknowledging what organized crime groups are operating where is essential for understanding what types of crimes are happening and how to fight them." 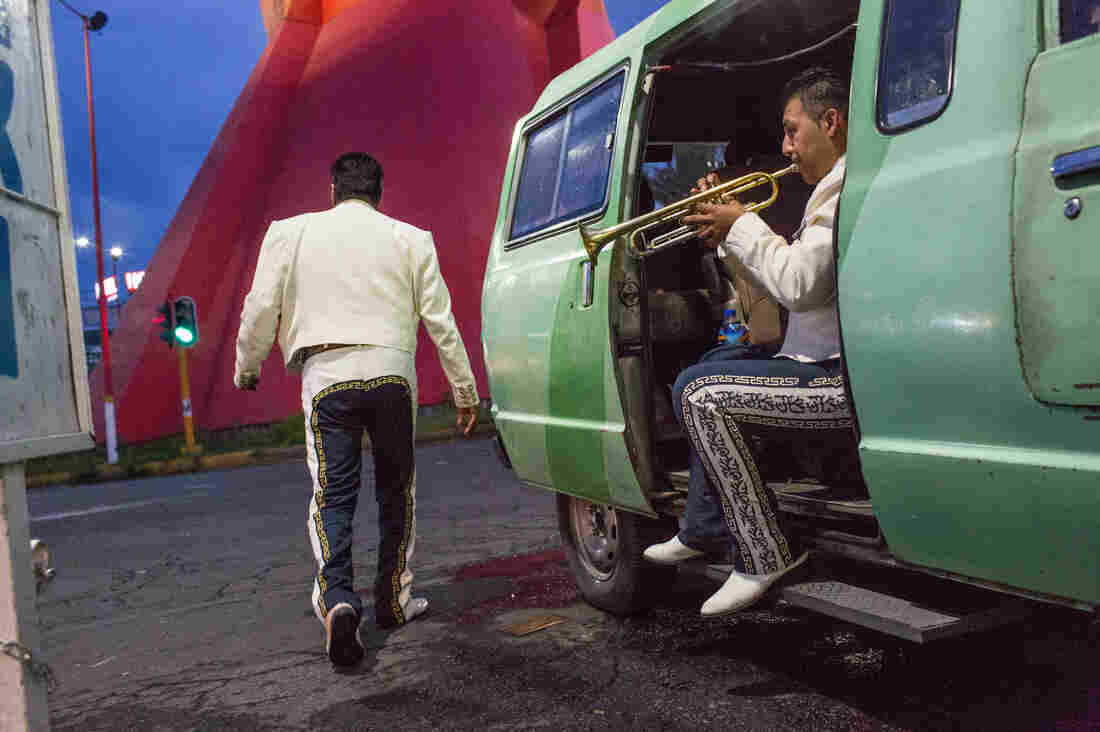 After a fight broke out nearby, Eric Giovani Fabian, 20, plays his trumpet, as his mariachi band, Nuevo Imperio, waits for clients in Mexico City, in August 2017. Brett Gundlock hide caption 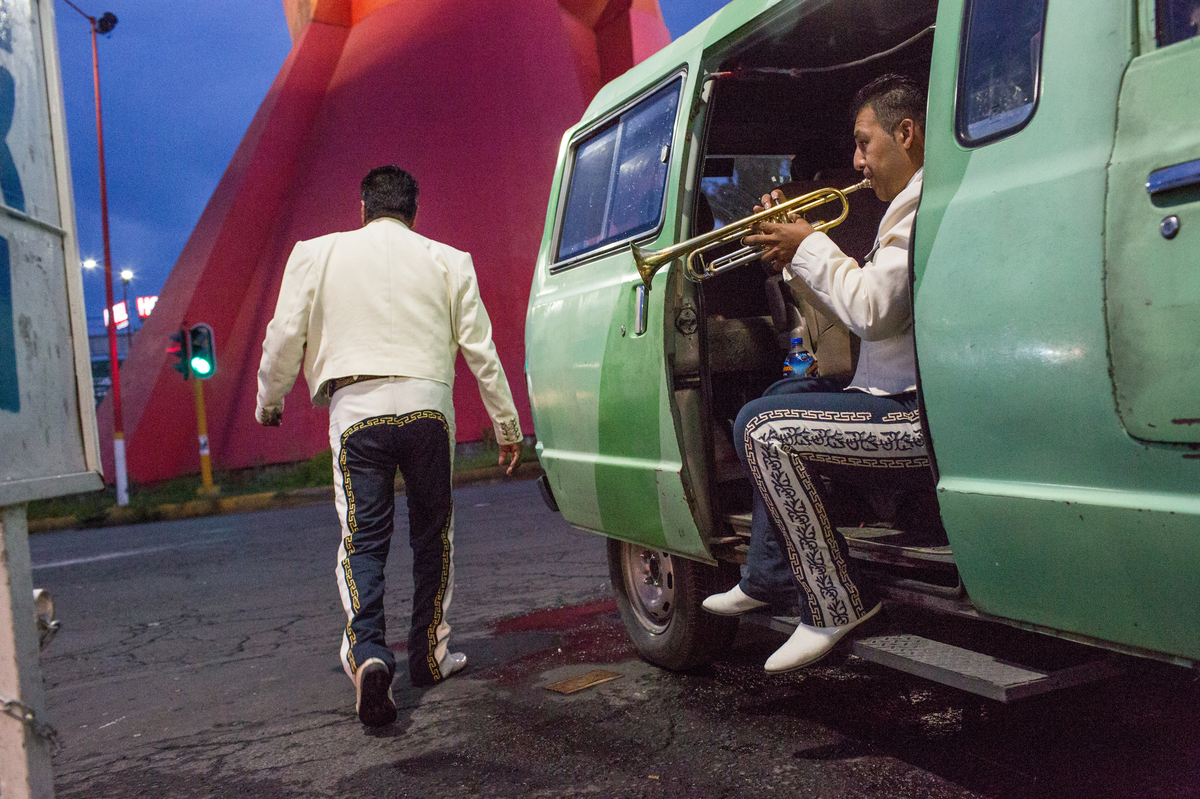 After a fight broke out nearby, Eric Giovani Fabian, 20, plays his trumpet, as his mariachi band, Nuevo Imperio, waits for clients in Mexico City, in August 2017. 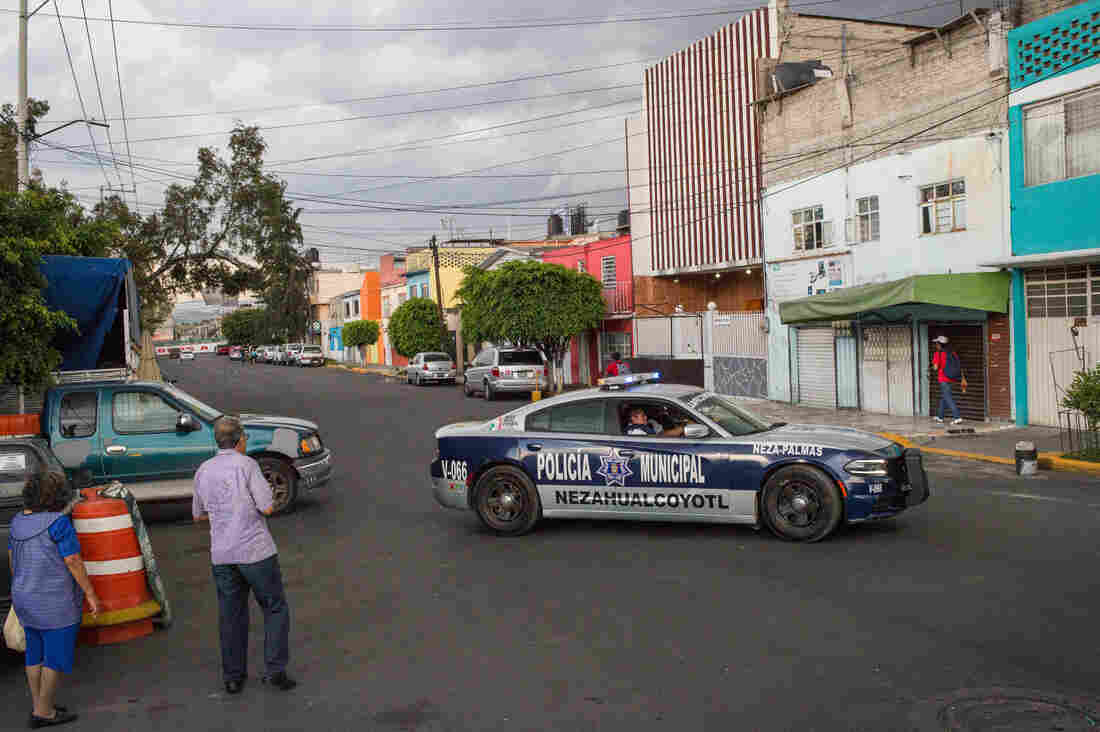 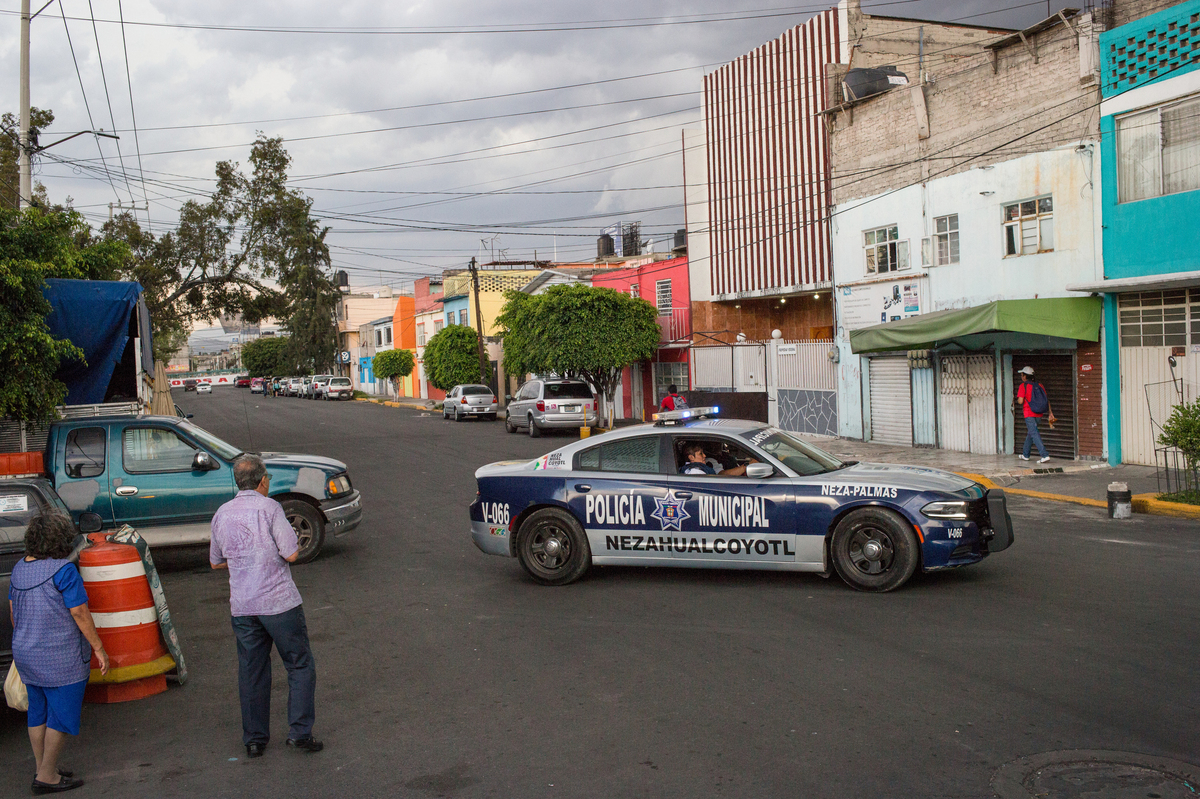 Sánchez is worried about the current trends in the Mexican capital.

"If Mexico City authorities aren't careful, things could get a lot worse in the next two to three years," he says.

And this could put reporters at even greater risk.

"There are a lot more things that you see that you can't say publicly," he says. "We know there are consequences."

Journalism is a deadly profession in Mexico. Only Iraq and Syria recorded more murders of journalists than Mexico in 2017, according to the Committee to Protect Journalists. In the past three years, at least eight crime reporters like Gama have been killed in other parts of Mexico.

But he isn't worried about his safety yet.

"I don't think I'm crossing any lines that could put me in trouble," he says along the edge of police tape.

But these unspoken lines in Mexico City are changing. New criminal groups are fighting their way in; new battles are being waged. It's less predictable every day.

"I've never seen killings like this, so many people fighting over the city like this," he says.