Accessibility links
'A Very English Scandal' Is Veddy, Veddy Fun, Indeed The stars of Paddington 2 (Ben Whishaw and Hugh Grant) reunite, under ... very different circumstances, for a 3-episode Amazon mini-series about a gay relationship that shocked the U.K. in the '70s. 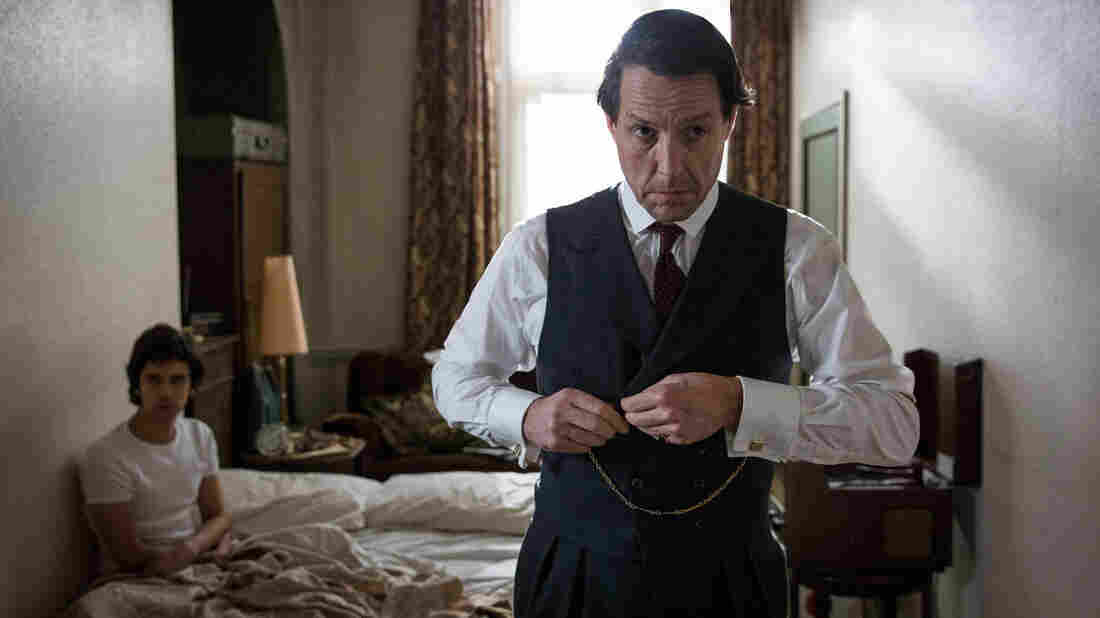 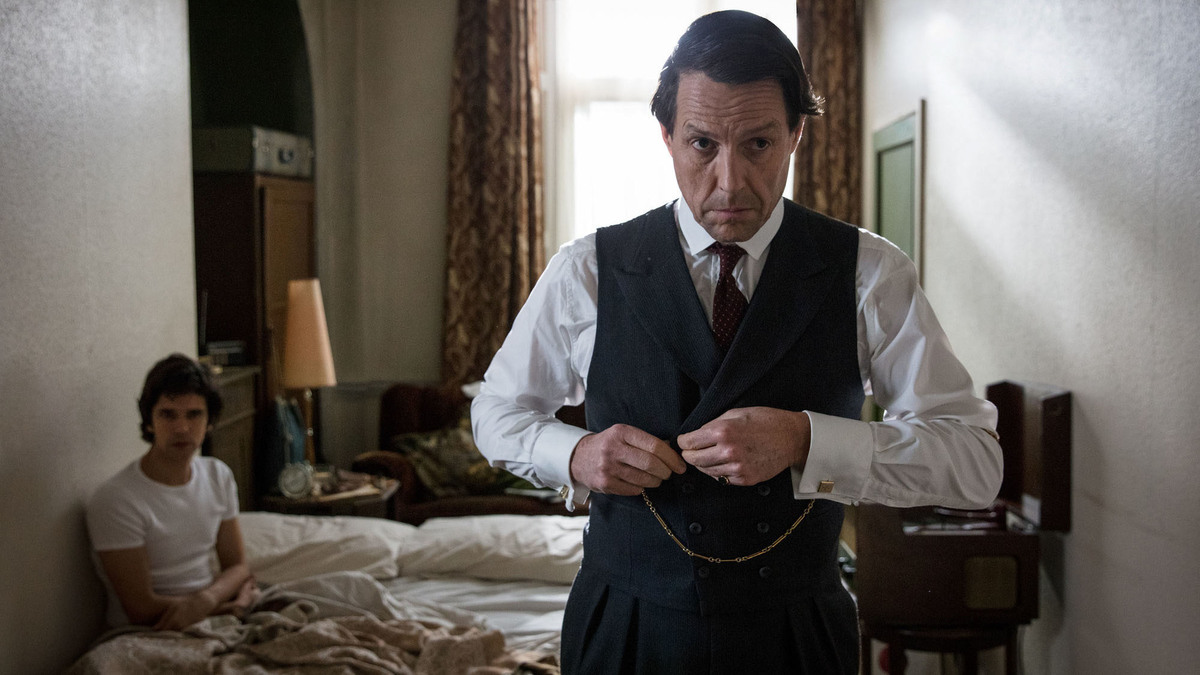 It is impossible to convey, in paltry written English, the astonishing breadth of dark, rich, velvety plumminess with which Hugh Grant delivers that line in Amazon's gloriously fun 3-episode mini-series, A Very English Scandal.

It is plummier than an Argentinian Malbec. Plummier than the Williams family's icebox at midnight.

Put it this way: When you order moo shu pork, it comes on the side. Is how plummy.

It is the sound of privilege, distilled to its essence. Into that brief string of phonemes Grant deftly infuses centuries of British class hierarchy, blending notes of high camp with potent, pharmaceutical-grade smarm and a preening, self-congratulatory sense of entitlement. He says "Are you ... my little bunny?" but what he means is You, little thing, belong to me.

The you in question is Ben Whishaw's Norman Scott, a wan and wispy stable boy who's shown up penniless to the Palace of Westminster office of the me in question: Grant's (significantly older) Jeremy Thorpe, a Member of Parliament whose career, in the early 1960s, is on the rise.

The two men enter into a sexual relationship which, were it discovered, would lead to their arrest, public shaming and, in Thorpe's case, the ignominious end of a career in public service.

It gets discovered, of course, eventually. The resulting scandal — involving blackmail, conspiracy to commit murder and a spectacularly bungled attempted murder resulting in canicide — turns out to be, as the title suggests, very English indeed, in that it is fueled by the desire to avoid the one thing Brits fear more than death: embarrassment. The resulting trial, which takes up most of the third episode, is no slouch in the British department, either, what with its wigs and robes and "I say!"s and "See here!"s and arch diffidence and diffident archness and whatnot.

Watching this very — nay, achingly -- English affair play out, and then flame out, is what a Brit might call "a right old hoot." It's soapy, funny, by turns gorgeous and grubby, and performed with a kind of headlong verve that's never less than fascinating to behold.

In its central conflict between representatives of the old, toffee-nosed and deeply closeted upper classes and the young, hedonistic and exultantly out working class, the series wears its heart on its (flared) (paisley) sleeve. The screenplay is by Russell T. Davies (based on the 2016 novel by John Preston), and it's directed by Stephen Frears. The series dives into this gratifyingly dishy story in the hopes of making a larger point about gay history. It succeeds, mostly.

Thorpe and Scott began their affair while homosexuality was still illegal in the U.K., and it became public fast on the heels of decriminalization. We see Grant's Thorpe and Whishaw's Scott embrace those changing times along divergent tracks: Thorpe into marriage, family and respectability, Scott into partying, poverty and halting attempts at heterosexuality. To Davies and Frears, Scott is the hero of the piece, and they place their thumbs on the scale by supplying him plenty of moments — based on trial transcripts along with invented scenes — for him to express his out, loud and proud dignity, while Thorpe goes on stiffly dissembling, and stiffly prevaricating, and stiffly conspiring.

That's significant. Had A Very English Scandal been made even ten years ago, the story might simply have been mined for its sordid details, of which there are plenty, without placing it in a meaningful context. But several wonderful actors show up to invest real emotion into scenes about the effect of the closet on themselves and their loved ones (look out for David Bamber's brief but moving turn as Lord Arran in episode two.) A queer sensibility pervades the series, colors it and ultimately informs it in ways that pay off both in specific scenes and on the whole.

One small example: It frees Whishaw to queen it up to the heartwarming extent he does here, flouncing about the place in a way that feels as it should — natural and free and unconcerned, not soberly studied or practiced. Not, in other words, actorly. Crucially, while the series sides squarely with his character, it doesn't falsely revere him — he's given the necessary room to be vain and impatient and selfish and whiny, and the result doesn't feel, as it otherwise might, like any kind of Statement About The Gays, but simply an intimate portrait of this one guy, and his seriously impressive head of hair.

For his part, Grant is playing a variation on the artistocratic cad he played in last year's Paddington 2, substituting for that role's vaudeville ham something more centered, more sinister and — disturbingly but unfailingly — charming throughout. Sure, Grant's played a lot of supercilious jerks over the years, but it's very possible he's never had more fun — or been more fun to watch — than he is here. The man can make the simple act of stirring an egg into his steak tartare a tableau of supremely punchable self-satisfaction, and later make us feel his cornered, heart-thudding panic at being discovered, and still later allow us to see, behind the toothy grin-grimace that causes those blue eyes to crinkle so, his quiet, soul-sick desperation.

In A Very English Scandal's opening scene, the script calls for Thorpe to mimic the upper-class mannerisms of a colleague ("I would be veddy veddy veddy disappointed"). It's to Grant's credit that the actor slips so deftly between that caricature and a character with which, after all, it shares so veddy, veddy much in common — which is, of course, the joke.

Whenever the camera pans away from Grant and Whishaw, the tone of the mini-series tends go a bit wobbly. As would-be assassin 'Gino' Norton, Blake Harrison goes comically broad — like, early Coen Brothers broad — and never quite slips into the groove of the show around him, which is marked by so much sniffy, buttoned-up rectitude. And while Davies's script and Frears' direction expend considerable time and attention on the women in Thorpe's and Scott's lives, they never manage to emerge as clearly delineated characters in their own right.

But as a playground for Whishaw and Grant, A Very English Scandal soars. The actors starred together in Paddington 2, of course, and over and above its manifold delights, it's fun to imagine this mini-series as a kind of alternate-universe sequel — one in which Paddington (voiced by Whishaw) ditches that lumpy, unflattering overcoat for a clingy top and flared polyester pants to hit the gay disco, undergoing, in the process, that rarest of all transformations possible in the gay community: From bear to twink.