Accessibility links
The U.S. Has A Long, Troubled History Of Detaining Families Together Now that President Trump no longer can separate migrant families detained at the border, his administration is preparing to lock them up together — an arrangement with many critics and legal limits. 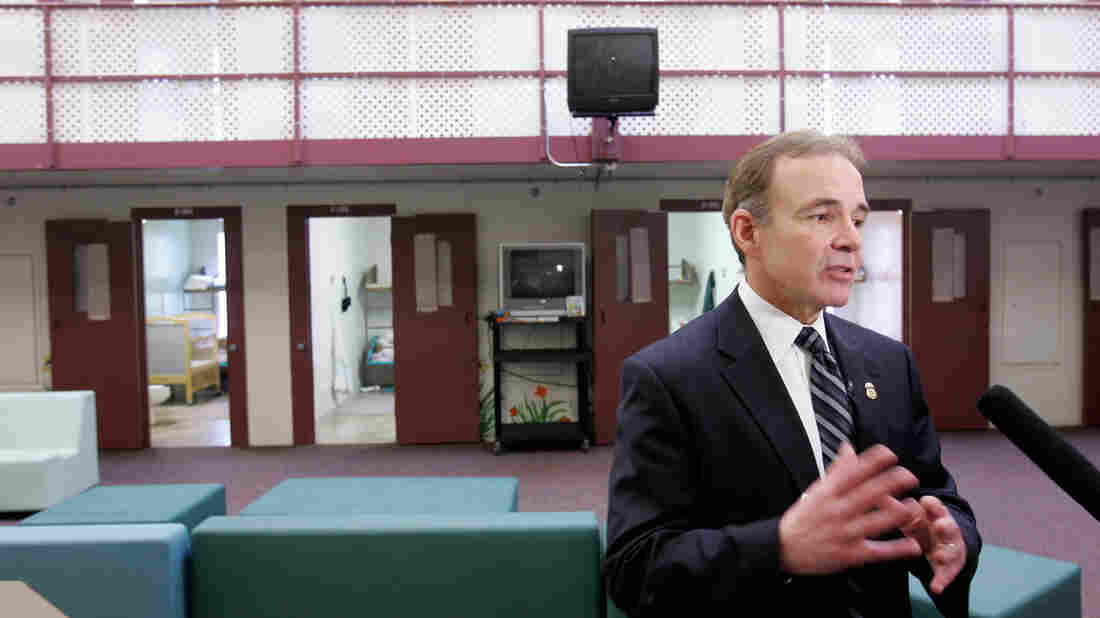 Garry Mead, assistant director of detention and removal for Immigration and Customs Enforcement, answers a reporter's question in 2007 in front of cells that housed immigrant families at the T. Don Hutto Residential Center in Taylor, Texas. After a suit by the ACLU, the center ended family detention, and ICE mostly avoided it until 2014. LM Otero/AP hide caption 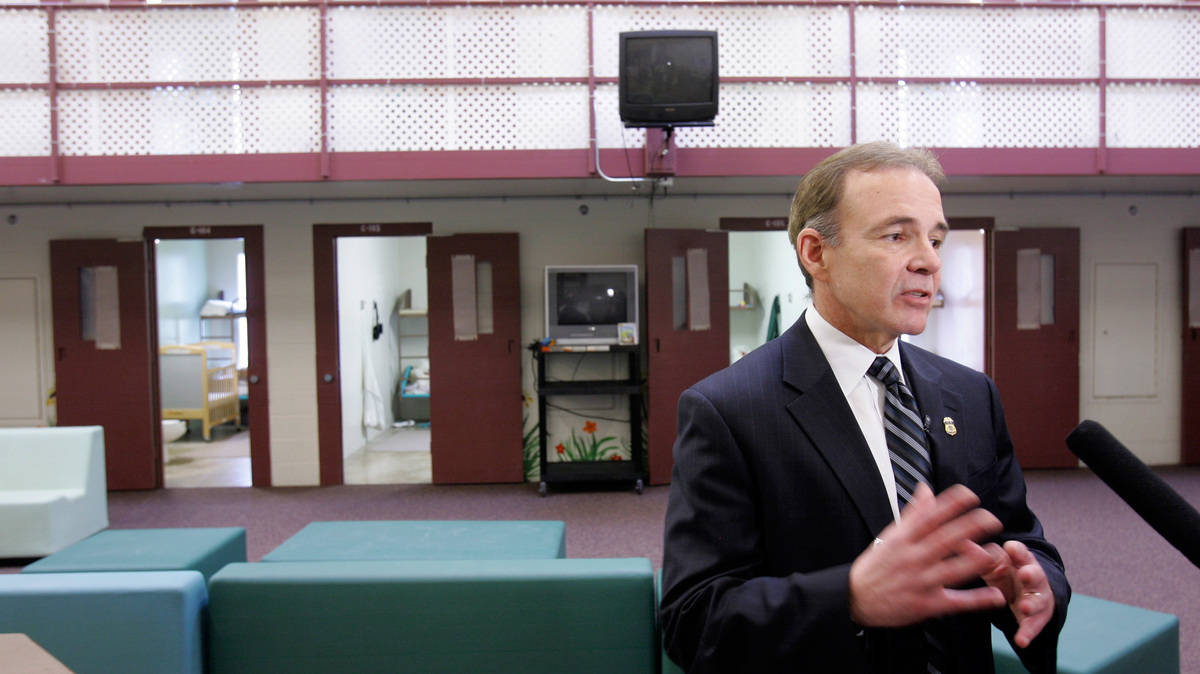 Garry Mead, assistant director of detention and removal for Immigration and Customs Enforcement, answers a reporter's question in 2007 in front of cells that housed immigrant families at the T. Don Hutto Residential Center in Taylor, Texas. After a suit by the ACLU, the center ended family detention, and ICE mostly avoided it until 2014.

Now that President Trump can no longer separate migrant families apprehended at the border, his administration is preparing to lock them up as a unit.

The Defense Department is under orders to confine up to 12,000 immigrant parents with their children on military bases, as a way to deter future illegal immigration. Two installations in Texas plan to start putting up temporary housing after July Fourth.

Family confinement has a troubled, litigious history in the United States, and legal advocates for immigrants are preparing for a major battle ahead.

Inside a ramshackle ranch house in the inhospitable brush country of South Texas, a group of volunteers has been fighting family detention. The recent moves by the Trump administration to expand the confinement of undocumented families seeking asylum could make their 12-hour days even longer.

"Tarantulas, we have rattlesnakes, we have scorpions," says Katy Murdza, advocacy coordinator for the CARA Family Detention Project, describing the wildlife on their grounds. "And we spend most of our time working." 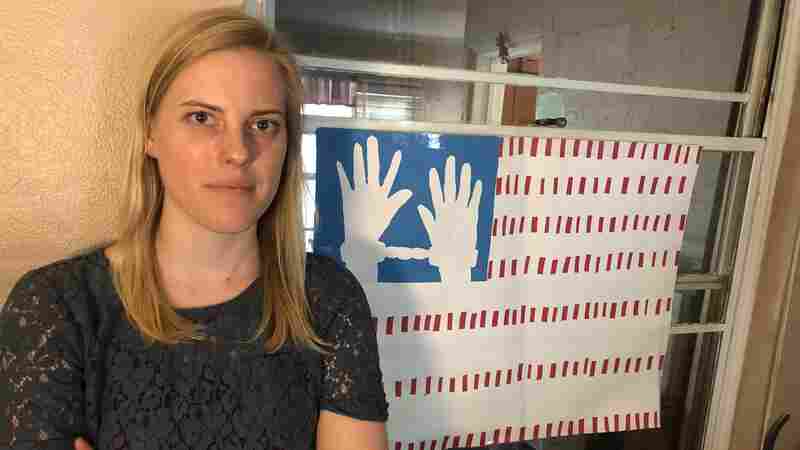 Katy Murdza is a volunteer with the CARA Family Detention Project, which provides legal advice to 2,000 mothers and children who are confined at the South Texas Family Residential Center. John Burnett/NPR hide caption 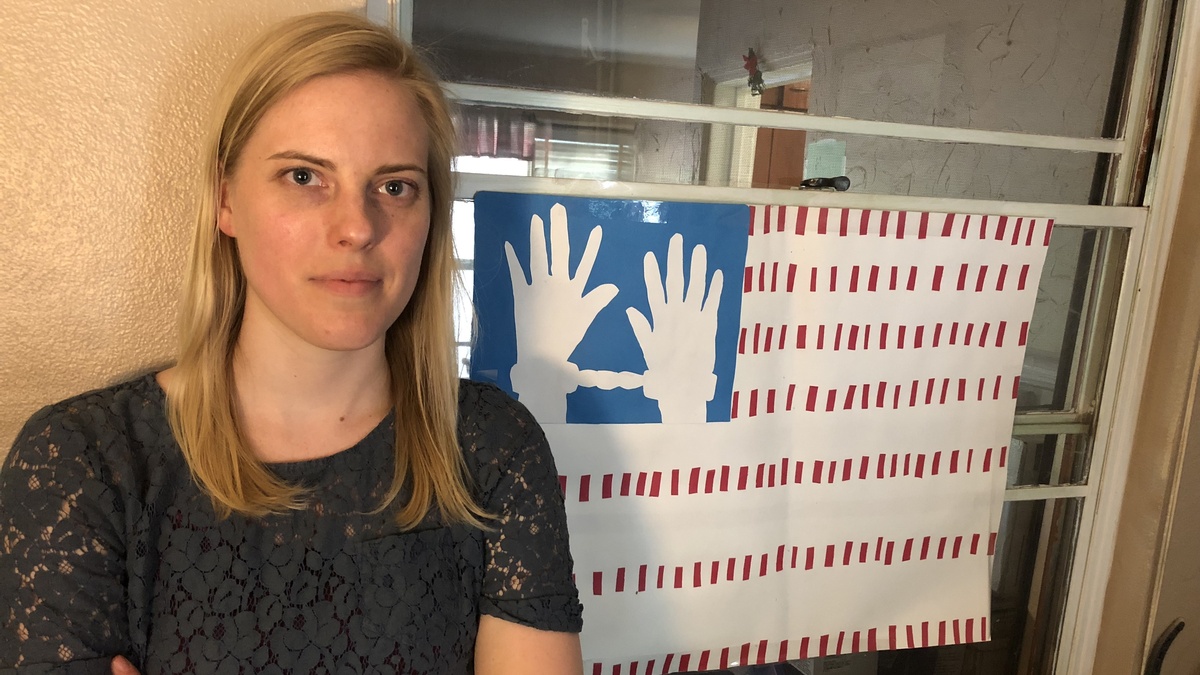 Katy Murdza is a volunteer with the CARA Family Detention Project, which provides legal advice to 2,000 mothers and children who are confined at the South Texas Family Residential Center.

The volunteers come here from around the country to provide legal advice to 2,000 mothers and children who are confined in the gilded cage that is the South Texas Family Residential Center.

"These are not criminals like the administration wants people to believe," she says.

(Entering the country illegally for the first time is a federal misdemeanor and a civil immigration violation. As such, conditions of confinement are not supposed to be as harsh for unauthorized immigrants as they are for federal felons, hence the name detention facility versus prison.)

This sprawling complex of portable buildings is located on the outskirts of the town of Dilley, an hour south of San Antonio. It's the largest of two family detention facilities in South Texas, and is overseen by U.S. Immigration and Customs Enforcement (ICE) and operated by for-profit corrections corporation CoreCivic.

The problem for the White House is that the detention center is nearly at capacity.

The fly in the ointment, for Trump, is the Flores settlement.

"The Flores settlement says that kids can't be detained any longer than is necessary, and right now it's limited at 20 days," Murdza says.

This restriction was imposed by a federal judge in California. The Justice Department is currently working to overturn Flores, to ensure that families can be detained until their court date comes up. Meantime, immigrant parents and children must be released after three weeks. ICE straps an electronic ankle monitor on the mother, which allows immigration agents to track her location.

"What they're proposing in place of family separation," says Murdza, "is a return to the early days of family detention, where families were detained indefinitely."

Late Friday, the Justice Department announced it would — as these attorneys feared — begin detaining asylum-seeking families indefinitely, beyond the 20-day limit in Flores. But it did not specify where they would housed.

We've been here before. 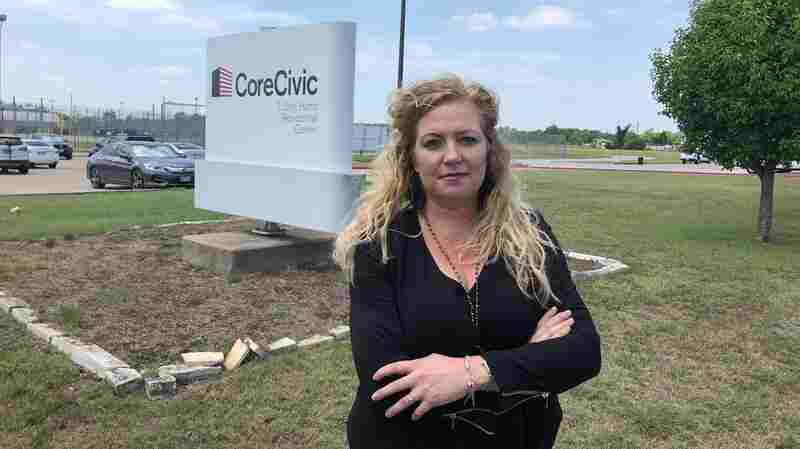 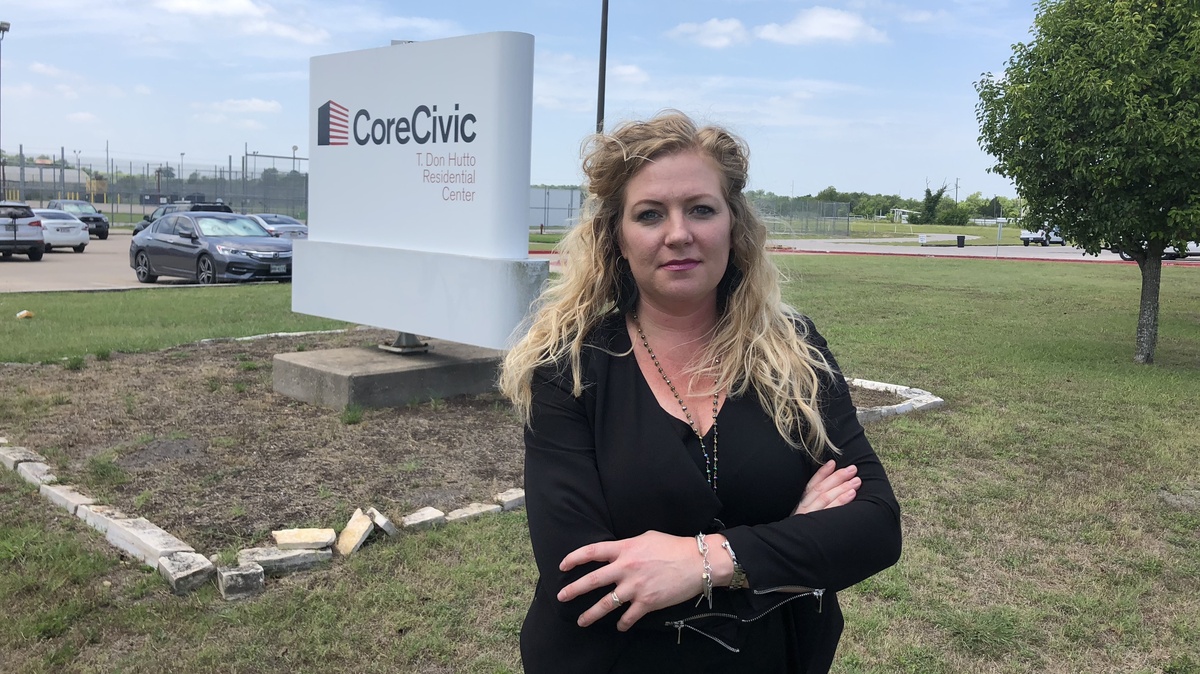 Kate Lincoln-Goldfinch is an immigration lawyer who works with clients inside the T. Don Hutto Residential Center in Taylor, Texas.

Three hours north on Interstate 35, just past Austin, is the city of Taylor, Texas. Here, between rolling hills and a train track sits the T. Don Hutto Residential Center, which opened 12 years ago as a medium-security, 500-bed jail to hold families seeking asylum.

Conditions were appalling, according to Kate Lincoln-Goldfinch. She was a law school student volunteering there in 2007. Now she's an Austin immigration lawyer with clients inside the facility.

"There's barbed wire, there are prison guards," she says of the 2007 conditions. "There's counts throughout the day so that people are in their cells for hours of the day, there's no free movement around the facility, the food was terrible. You know, it's just a prison."

The ACLU sued over poor education, substandard health care, and a lack of privacy at T. Don Hutto, named for the co-founder of Corrections Corporation of America, now CoreCivic. The Obama administration settled, promising to improve conditions. ICE removed barbed wire, repainted the walls bright colors, let detainees wear their own clothes, offered classes to children, and even took them on field trips.

However, in 2009, ICE abandoned family detention at T. Don Hutto altogether, and changed the detainee population to single females.

In a compliance report on the facility that year, U.S. Magistrate Judge Andrew Austin observed, "While ICE can call Hutto 'a juvenile and family residential facility,' that doesn't change the fact that it is a jail. ... It seems fundamentally wrong to house children and their non-criminal parents this way. We can do better."

John Sandweg, who was acting director of ICE from 2013 to 2014, said he took lessons from the T. Don Hutto case.

"What I learned is that detention is a very difficult business, and no matter how well intentioned you are, when you confine people in facilities like that, under stress, bad things can happen," says Sandweg.

(Since 2009, there have been numerous reports of mistreatment and sexual assault at the facility. Last week, the Williamson County Commissioners Court voted to sever its ties with CoreCivic and ICE and not renew its agreement with T. Don Hutto. The action was taken as a protest of Trump's immigration enforcement policies.)

Better — to a point

ICE mostly stayed out of family detention until 2014— a few months after Sandweg left. Alarmed by a surge of Central Americans crossing the border illegally, ICE resumed confining asylum-seeking families.

They first were held at a Border Patrol training camp in Artesia, N.M., and later at permanent facilities in Texas — the Karnes County Residential Center, in Karnes City, and the larger facility in Dilley. Learning from its mistakes with the T. Don Hutto facility, Lincoln-Goldfinch says ICE tried to make the new South Texas facilities more family friendly.

"You go in the lunch room and there are murals of smiling broccoli. And then in the rec area, there's a playscape," she says.

A 2017 report from the Inspector General of the Department of Homeland Security noted, after three surprise visits, that ICE's three family detention facilities were "clean, well-organized, and efficiently run." Further, the report concluded "ICE was satisfactorily addressing the inherent challenges of providing medical care and language services and ensuring the safety of families in detention."

But advocates continue to complain that family detention centers deliver poor medical care and lack services for detainees who speak languages other than English and Spanish, and that conditions of confinement are not appropriate for young children, who exhibit problems like bed-wetting and weight loss.

And advocates are fearful of what Trump's version of family confinement will look like. 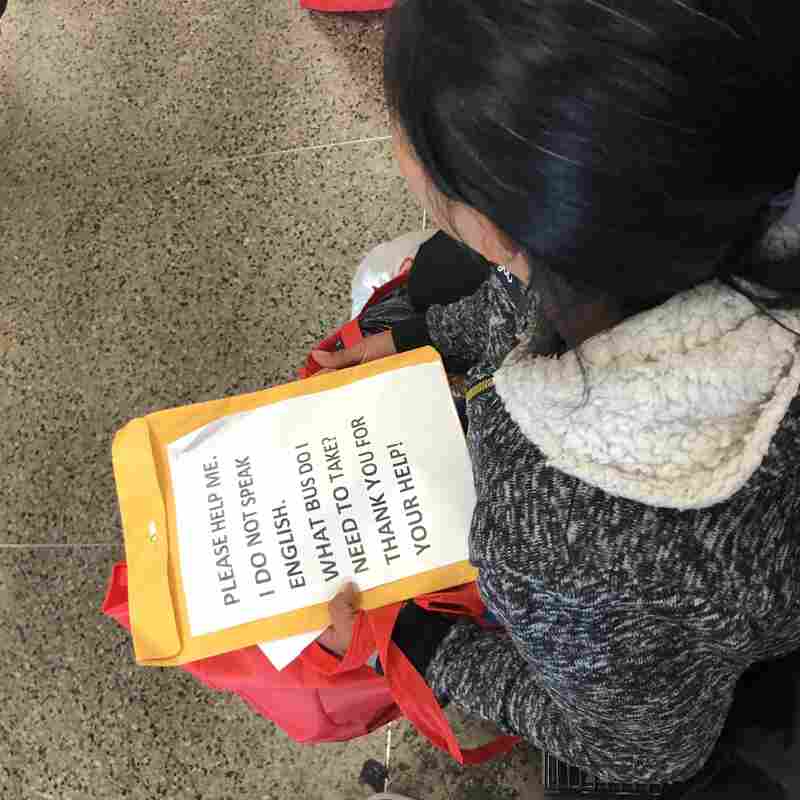 Marta, a Guatemalan immigrant who was recently released from South Texas Family Residential Center in Dilley, Texas, with her 15-year-old son, waits for a bus at the Greyhound station in San Antonio, Texas. John Burnett/NPR hide caption 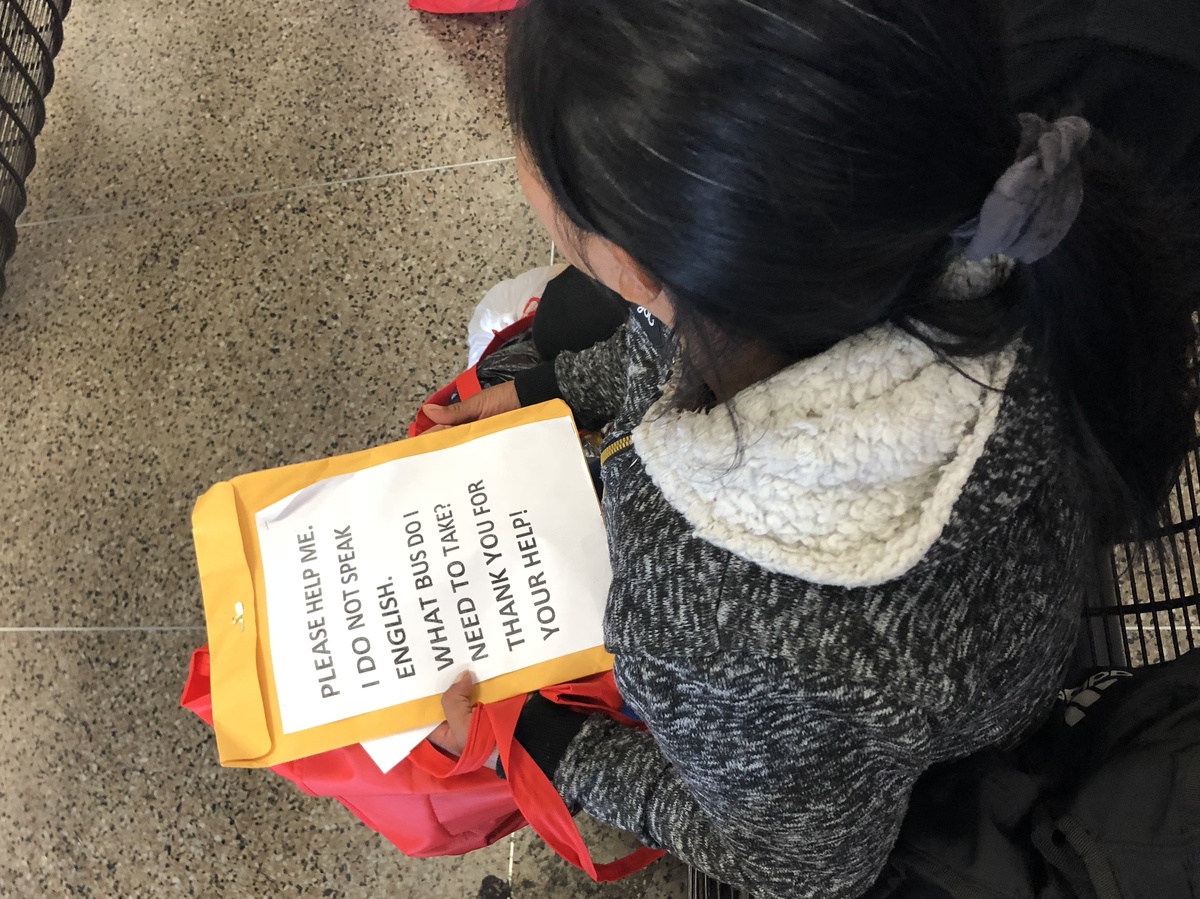 Marta, a Guatemalan immigrant who was recently released from South Texas Family Residential Center in Dilley, Texas, with her 15-year-old son, waits for a bus at the Greyhound station in San Antonio, Texas.

"The legal community is bracing for a fight again," says Lincoln-Goldfinch. "It's family detention 3-point-0."

Families who are released from Dilley end up at the Greyhound station in downtown San Antonio. There, dozens of mothers with squirming children wait for buses to distant cities. They're recognizable by their colorful T-shirts, jeans and bulging ankle monitors — all courtesy of ICE.

A woman from Guatemala who gives her name as Marta is asked what conditions are like at the Dilley detention center, which she had just left.

"They don't give us freedom," he says in a clear voice.

A previous version of this story incorrectly said the 20-day limitation on the detention of migrant children was imposed two decades ago. The original settlement on the issue was reached in 1997, but it has been altered in recent years. In addition, this story had incorrectly suggested that the government stopped using the T. Don Hutto Residential Center as a family detention center two years after it was criticized in a 2009 report. The center was switched to a women-only facility in 2009.