Accessibility links
Justice Anthony Kennedy May Soon Find His Legacy Undermined The Supreme Court justice may believe that rights once recognized will not be taken away, but President Trump is about to get his second nominee to the court and it's sure to be a conservative. 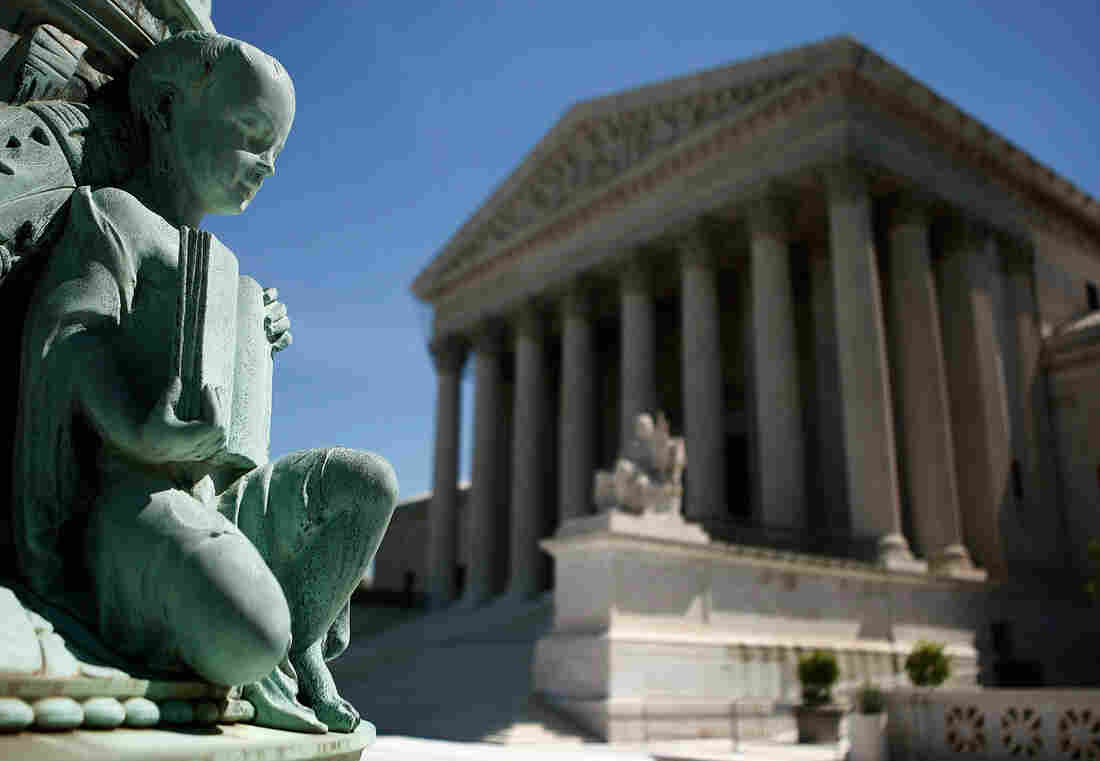 The Supreme Court term that just concluded was a small taste of what is to come. In all, 13 of the cases decided by a liberal-conservative split, Justice Anthony Kennedy provided the fifth and deciding conservative vote. Mark Wilson/Getty Images hide caption 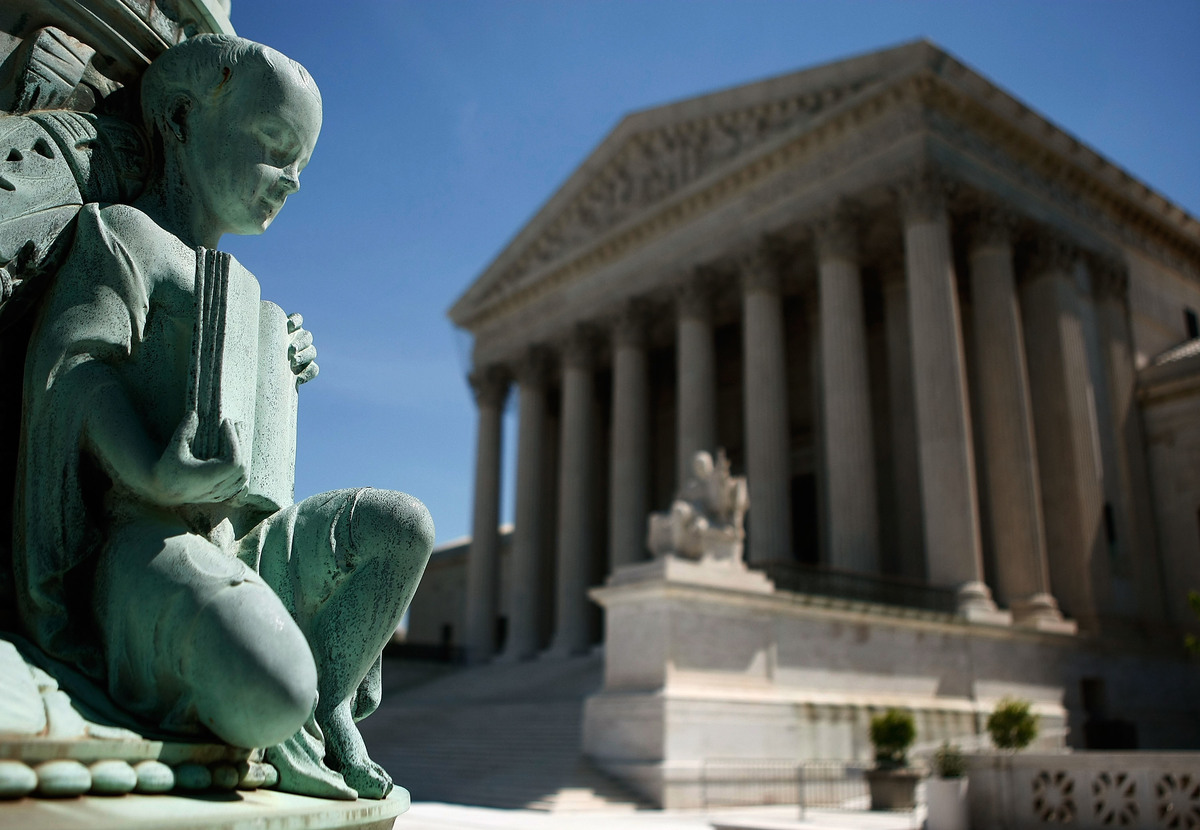 The Supreme Court term that just concluded was a small taste of what is to come. In all, 13 of the cases decided by a liberal-conservative split, Justice Anthony Kennedy provided the fifth and deciding conservative vote.

For four decades, the Supreme Court has been like a balance board, tilting this way and that. And, while it has moved more and more to the right with each reset, the center has held.

This term, and for the foreseeable future, however, the board looks more like a slide.

Justice Anthony Kennedy, who announced his retirement this week, may feel secure in his legacy. But Justice Sandra Day O'Connor did, too, only to be disappointed.

In the early 2000s, Justice O'Connor sat at the center of the court alongside Justice Kennedy. When she retired, she thought her legacy was secure – including the protection of women's rights, abortion rights and the ability of the legislative branch of the government to regulate campaign money in order to prevent influence peddling and corruption.

In subsequent years, she would privately make clear how unhappy she was with her replacement — Samuel Alito — for what she perceived as the undermining much of that legacy.

Now, it is Anthony Kennedy. After 30 years on the court, he believes that once rights are recognized, they will not be taken away. That includes the right to abortion that he helped to preserve and the rights for gay people that he helped establish — including the right to marry and to be treated equally.

Time, of course, will tell. But every indication is that President Trump in a little over a week will pick someone who does not think that those are rights fully protected by the Constitution.

Once a nominee is confirmed, the only real question will be how far he or she will go to undermine or outright reverse the Supreme Court's prior rulings on these and other subjects — from regulation of the environment to presidential powers.

The Supreme Court term that just concluded was a small taste of what is to come. In all, 13 of the cases decided by a liberal-conservative split, Justice Kennedy provided the fifth and deciding conservative vote.

Moreover, his unwillingness to take a clear position on the question of partisan gerrymandering meant that the court punted on the issue for now and probably for generations to come. Technically, the court could again consider whether partisan gerrymandering is ever so extreme that it justifies being policed by the courts. But, in reality, Justice Kennedy's vote was the only one that was really up for grabs, with the rest of the court split between the liberals, who favor intervention in extreme cases, and the conservatives unilaterally opposed.

Similarly, while a cake designer who refused to design a wedding cake for a gay couple technically won his case, the court left unresolved the issue of whether commercial business owners can refuse to sell products and services to gay people because of the business owner's religious beliefs.

Justice Kennedy's vote was pivotal, too, in sustaining the Trump travel ban, a decision that enhances the president's powers to regulate immigration in the name of national security.

His vote was critical in throwing out a California law that required anti-abortion health clinics to post signs informing patients that the clinics are not licensed medical facilities.

On the voting rights front, he cast the decisive fifth vote making it easier for states to purge voters from the rolls when they haven't cast a ballot for two consecutive elections.

And in a case involving the 2011 Texas redistricting, he joined a decision written by Justice Alito that made it more difficult to challenge racial gerrymanders that dilute the power of minority voters.

In that case, Trump appointee Neil Gorsuch joined Justice Clarence Thomas in his long-held but until now idiosyncratic view, that the Voting Rights Act does not cover the drawing of legislative districts at all.

Justice Kennedy's vote was also decisive in two other cases, involving workers' rights: One declared that employees have no right to sue their employers as a group when the employer has in place a waiver of the right to sue. The decision involved several large employers who have standard provisions that bar all their workers from bringing class-action suits on any subject — from wage grievances to sex and race discrimination claims.

While that decision undercut the ability of private employees to challenge their employers in court, a second decision undercut the effectiveness of labor unions. In Janus v. AFSCME, Justice Alito capped a six-year campaign to weaken the influence of labor unions. Overturning a 41-year-old Supreme Court precedent, he wrote the decision for the conservative majority declaring that it is unconstitutional to require nonunion members who work for state and local governments to pay partial fees to help pay for negotiating a contract that, by law, provides salary raises and benefits for union and nonunion workers alike.

The conservative majority called such partial fees "compelled speech," in violation of the First Amendment. The liberal minority noted that 28 states do not allow such partial fees, but 22 do, and making that choice, the liberals contended, should be up to the state governments.

The decision undoes a careful compromise on labor rights that has, for more than four decades, promoted "labor peace" and enabled more efficient government, the dissenters said. But the majority said the price for peace and efficiency cannot be paid by compelling individuals to support the labor unions, their goals and their influence.

Taken together, the labor decision for public employees and the decision barring class actions by private employees are bound to have significant economic consequences for workers in both sectors. In states where Republican governors have recently gotten legislation enacted to get rid of mandatory union fees, there has been a dramatic drop in union membership and union dues. So has the influence of labor unions, and the salaries and benefits they have been able to negotiate for their members.

On all of these questions and more, expect the Supreme Court to be far more conservative in the future. Justice Kennedy, even when he cast conservative votes this term, clearly had a restraining hand in the crafting of some of the court's decisions.

And on some other controversial subjects in the past, he has as well. For instance, when the court ruled for the first time that there is an individual right to own a gun, the opinion, written by gun enthusiast Antonin Scalia, included a section that was clearly the price of Justice Kennedy's vote, noting that reasonable regulations in the name of public safety are permissible.

Since then, the court has for the most part stayed away from gun regulation cases, to the consternation of gun rights advocates. But that will not continue forever, and the restraining hand of Justice Kennedy will no longer be on the court.

That will leave Chief Justice John Roberts with the next move. Though a consistent conservative, he occasionally has voted with the court's liberals, as he did this year in declaring that police must obtain a warrant to obtain cellphone location information from service providers.

Few doubt that any new Supreme Court justice appointed by Trump will move the court decidedly to the right, but as professor Rick Hasen, of the University of California, Irvine, put it this week, "The question is how John Roberts wants to move."

Court observers have "spent the last 11 years asking what Anthony Kennedy had for breakfast," he said. Now it's " 'What did John Roberts have for breakfast?' and it's a slightly different menu."