Accessibility links
'Darkest Time Of Night' Will Keep You Turning Pages Television investigative reporter Jeremy Finley brings his small-screen experience to bear in this debut novel, a satisfyingly suspenseful thriller with overtones of The X-Files and Stranger Things.

'Darkest Time Of Night' Will Keep You Turning Pages

'Darkest Time Of Night' Will Keep You Turning Pages 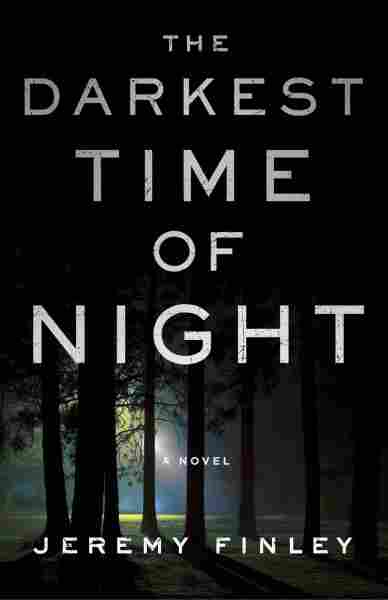 The Darkest Time of Night

What keeps us reading is a varied and curious thing. For one book, it's plot, for another, it's pacing, for still another, relevance — and so forth. (When you find a book that has it all? Call the Pulitzer hotline ...)

Jeremy Finley's debut The Darkest Time of Night may have a flaw, and more on that in a moment, but this novel's page-turning quotient is high. It's got an ambitious U.S. senator, Tom Roseworth, his homebody wife Lynn, the creepy wooded area behind their secluded Tennessee home, and the abduction of a grandson — whose disappearance leads Lynn to reckon with her even-creepier history as a research assistant to a rogue scientist, and eventually take off with her best friend, Thelma & Louise-style, on a cross-country mission to frozen Colorado and an ultimately creepy (yes, also creepy) destination.

If this sounds like a cross between The X-Files, The OA, Stranger Things, and Mr. Robot, that's because it is. Finley, an investigative television reporter, knows his shows, and also knows how to cross-cut showing and telling to maximum effect. Readers, dropped into the action on the first page as a young Lynn watches her father out in that creepy wooded area, will willingly and happily suspend their disbelief as Finley ratchets up the tension. Is this going to be a murder mystery? A sci-fi chiller? A ghost story?

Finley, an investigative television reporter, knows his shows, and also knows how to cross-cut showing and telling to maximum effect.

How about all of the above, and more — yes, there's even a strange love triangle. Lynn Roseworth, the senator's wife, is our narrator, and it's her focus on finding her beloved seven-year-old grandson William that hones her voice. Which is a good thing, because — here comes my cavil — she's otherwise almost unknowable. We know the 70-something Lynn runs a floral design shop out of the Roseworth home. We know she has three daughters and three grandsons. But is she matronly? Sassy? A control freak?

Or all of the above? Impossible to tell, and given her backstory, perhaps Finley wants us to understand that Lynn can't see herself clearly. That's a fair point, but the trouble is, she only sees some of the other characters clearly. We get excellent portraits of the rogue scientist, of her best friend Roxy, and of a man who helps them in Colorado — but members of Lynn's family, the one she's supposedly so devoted to, remain one-dimensional. When she leaves them to set out on her quest, what is she leaving?

I wondered — but I didn't stop reading, because while Lynn's character remains a bit of a cipher, her voice comes through as someone determined to prevail over her own fears. Catnip to any fan of the aforementioned shows! Lynn Roseworth is a sort of senior Dana Scully, or maybe more accurately a senior Fox Mulder. Her upbringing and experiences have convinced her that there's something out there, even if she has no earthly idea what it might be.

A few words about those experiences are necessary: As newlyweds, Tom and Lynn move to Illinois where he will enter law school. While Lynn dislikes the University of Illinois campus, comparing it unfavorably to her alma mater Vanderbilt (author Finley, are you an alum?), she happily accepts a position in the department of astronomy as an office manager.

There, she meets Professor Steven Richards, who acts strangely and boasts an office worthy of another TV show — Hoarders. Professor Richards soon hires Lynn for a special filing project, and when she discovers some uncanny ties between some of those files and her own memories, she starts asking questions — and becoming more and more engaged in and entangled with the Professor's real work.

When Lynn's past collides with her nightmarish present, it's because of that work, with more than a bit of government intrigue stirred in to good effect. By the time Lynn and Roxy set off for wintry Colorado on the trail of young William, The Darkest Time of Night has become a hugely satisfying, while still mystifying, suspense novel. The best part, if you're a fan of series like The X-Files? Finley may have sequels planned. And the book's final line may just make my criticism of Lynn's character development completely moot. We'll see. The truth is out there, and Jeremy Finley knows it even if we don't. Yet.