Accessibility links
'I Hope To God We Will Be Safe': Refugees In Lebanon Start Returning To Syria The Lebanese government is encouraging departures, but the U.N. objects. "We are at the service of the refugees," says a Lebanese security official, "but we have reached the limit of our capability." 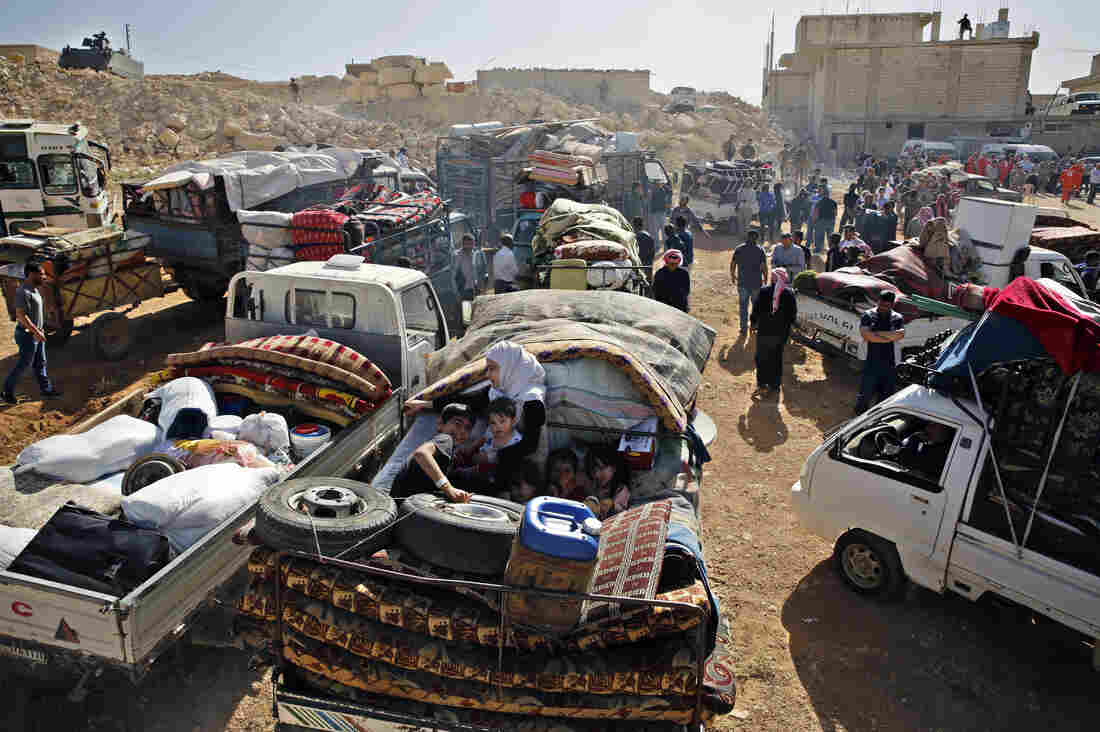 Syrian refugees gather in their vehicles as they get ready to cross into Syria from the eastern Lebanese border town of Arsal on Thursday. More than 400 Syrians were registered to make the crossing on Thursday, after having requested permission from the Lebanese and Syrian governments. Bilal Hussein/AP hide caption 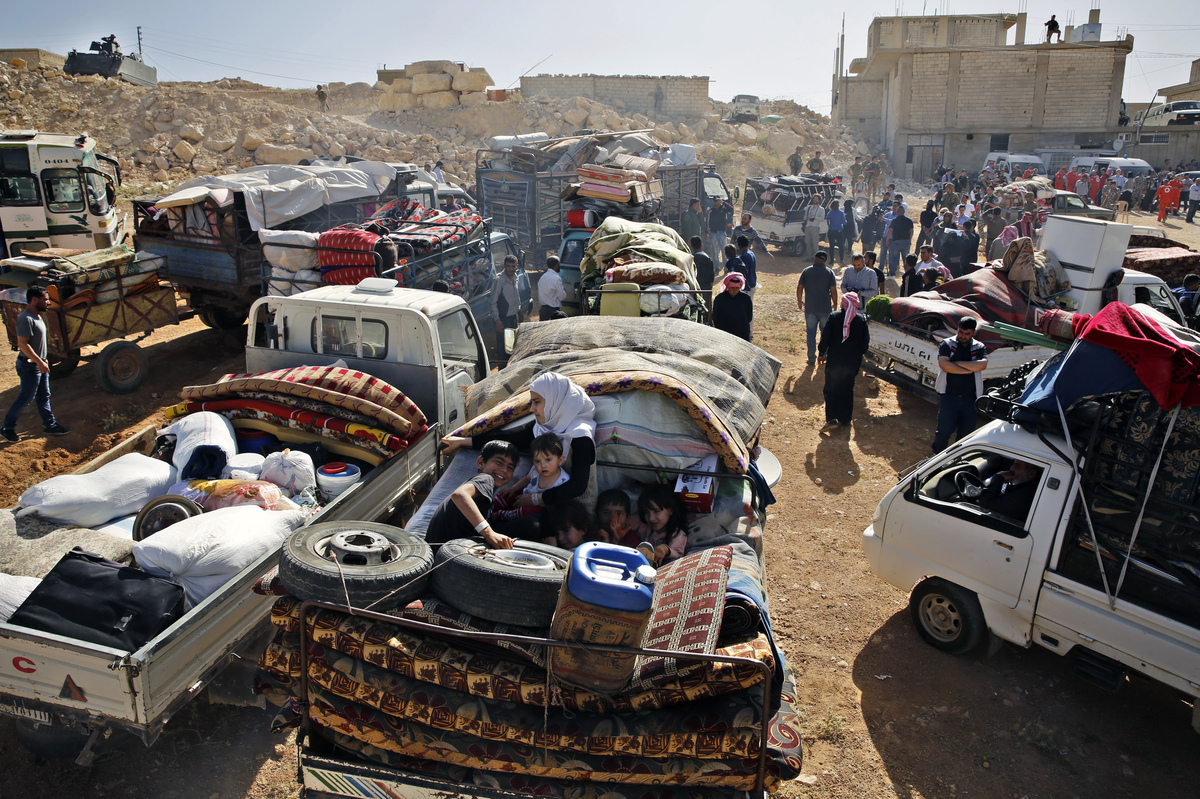 Syrian refugees gather in their vehicles as they get ready to cross into Syria from the eastern Lebanese border town of Arsal on Thursday. More than 400 Syrians were registered to make the crossing on Thursday, after having requested permission from the Lebanese and Syrian governments.

Hala hugged her 10-month-old baby close as she sat in the front seat of the pickup truck piled with the family's few possessions — thin mattresses, blankets, a small suitcase — as she waited to cross into Syria.

She had dressed neatly for the journey, in a carefully pinned maroon headscarf and black abaya gown. She tried to think of the positives: Her family would no longer be strangers in a foreign land; her children would set foot in their home country for the first time.

But as her convoy began to move toward the Syrian border, her nerve wavered.

"Do you think anything will happen to us on the road?" she asked, wide-eyed with fear and seeking comfort, even from a stranger. "I hope to God that we will be safe."

Hala, 35, who felt her situation was too unsafe to give her last name, was one of 472 Syrian refugees who registered to cross from Lebanon to Syria on Thursday, despite the ongoing civil war there. 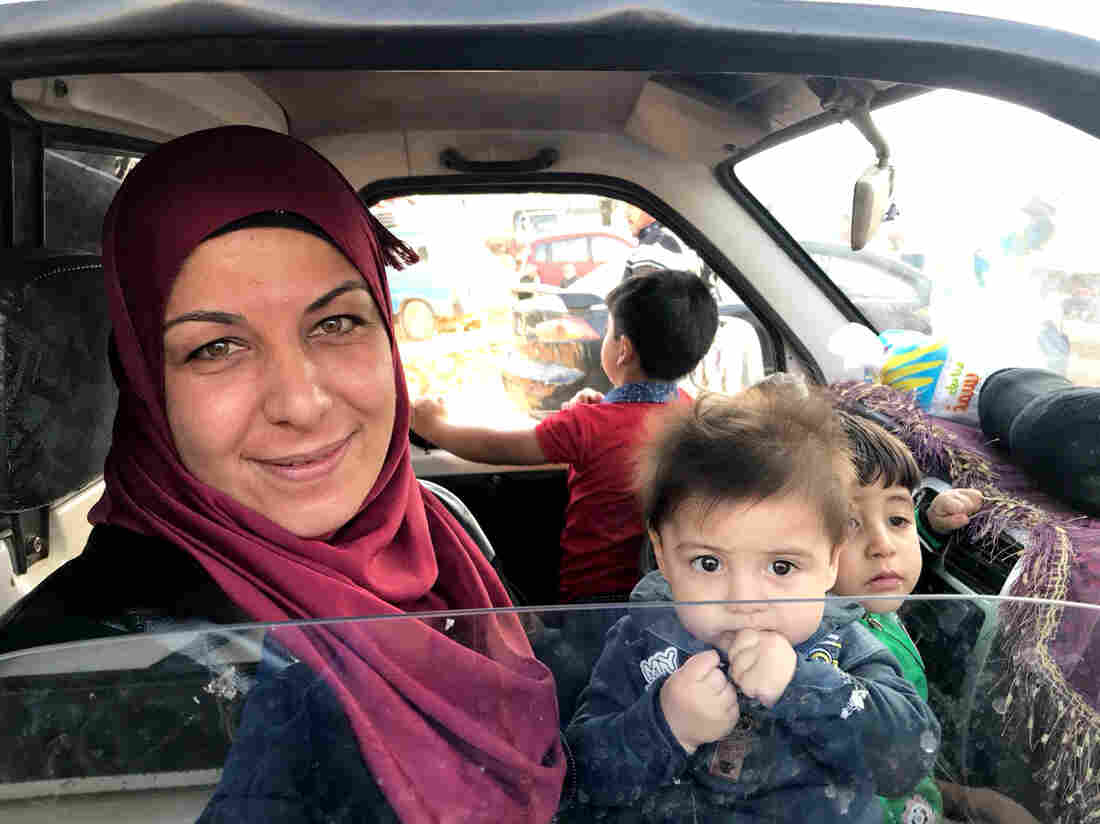 Hala, a Syrian refugee, cradles her children in the car ahead of her journey back to Syria. Ruth Sherlock/NPR hide caption 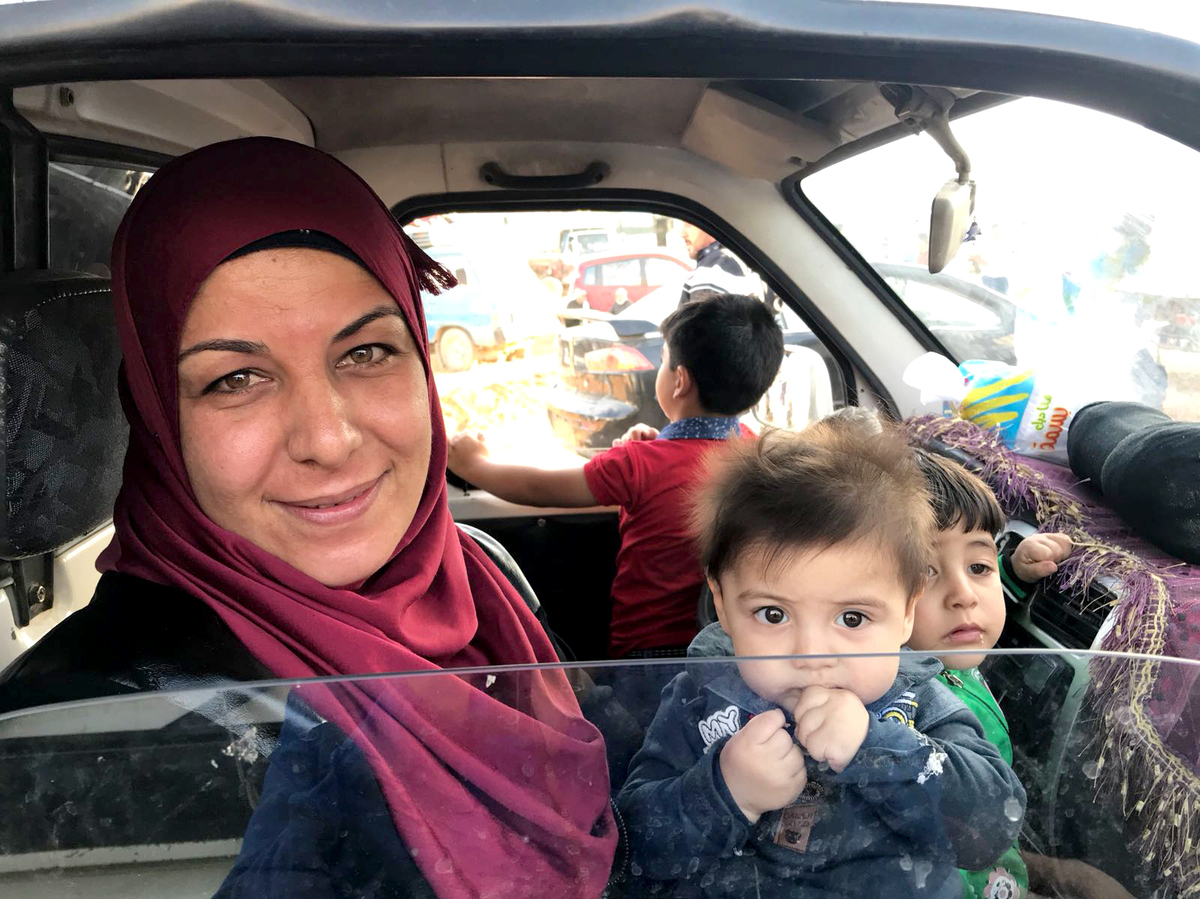 Hala, a Syrian refugee, cradles her children in the car ahead of her journey back to Syria.

They were some of the first refugees to return to Syria under a program overseen by the Lebanese government, which it says is voluntary. Lebanon's powerful Directorate of General Security intelligence agency checks with the Syrian regime that those signing up to return are not on its long list of "wanted" opponents, and won't be arrested if they go back.

This group of refugees comes from camps around the Lebanese border town of Arsal. Approximately 3,000 people answered a recent call put out on Facebook to people from this area by the General Security agency, according to a local negotiating committee that represents Syrians who want to go back. Only a small number have been cleared by the Syrian government to return so far.

More than seven years in, the civil war in Syria has decimated the country. Hundreds of thousands have died in the conflict that began as an insurgency against President Bashar Assad. Almost half the population has been displaced.

More than a million Syrians fled to Lebanon, swelling its population by almost a quarter and putting significant strain on the country's already weak infrastructure.

As the Syrian government, backed by its allies Russia and Iran, wins back more control over swaths of central Syria, officials in Lebanon have stepped up calls for refugees to return to areas where the fighting has calmed. 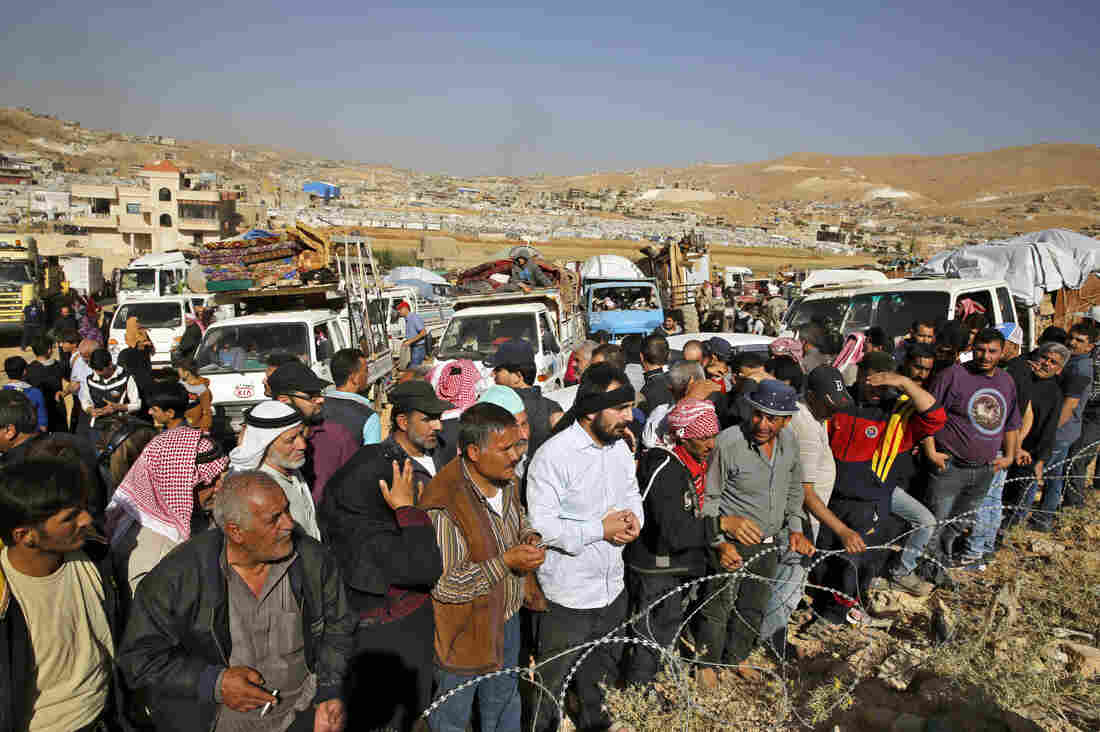 Some of the first refugees prepare to return to Syria from Arsal, Lebanon, on Thursday, under a program overseen by the Lebanese government. Bilal Hussein/AP hide caption 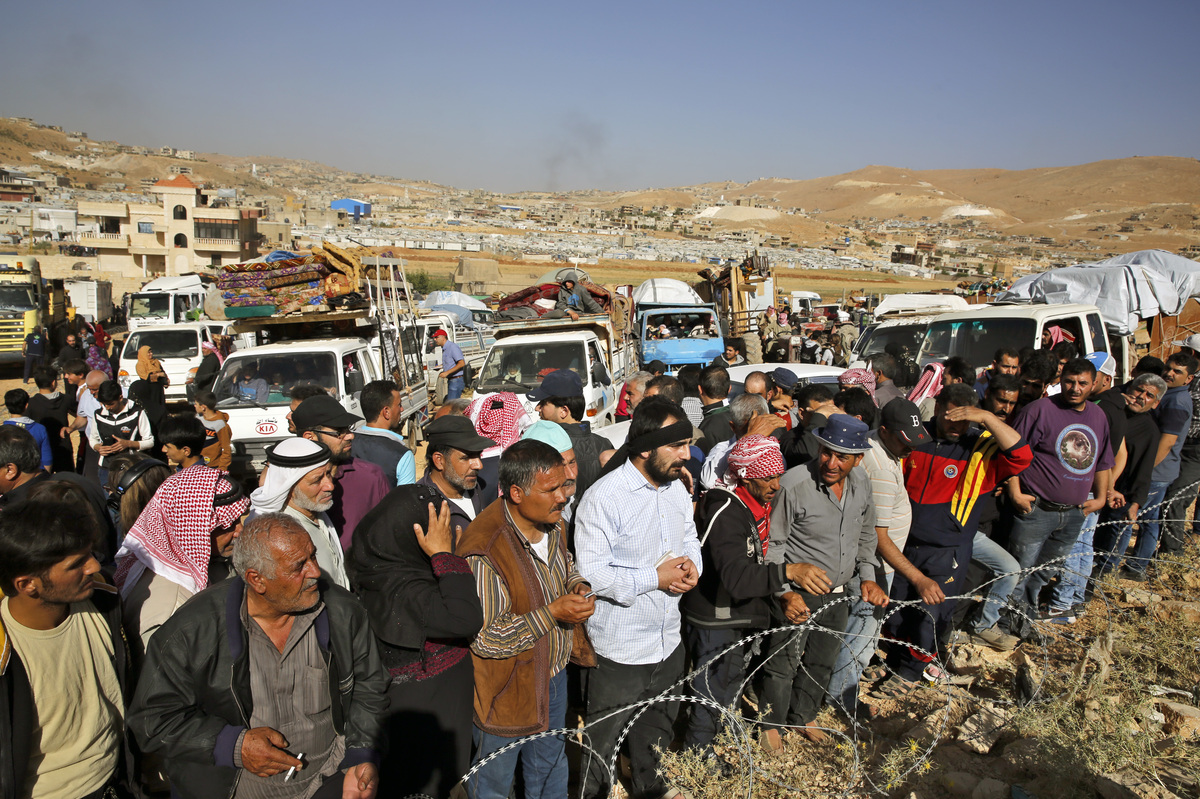 Some of the first refugees prepare to return to Syria from Arsal, Lebanon, on Thursday, under a program overseen by the Lebanese government.

"Our economy is very bad because of those refugees, and we have other problems — but the most important one is the refugee problem," Maj. Gen. Abbas Ibrahim, the head of Lebanon's General Security agency, said in an interview with NPR this week. "We are at the service of the refugees, but we have reached the limit of our capability."

Ibrahim, who leads the effort to encourage the refugees' return, said his agency is trying to help Syrians who want to go home.

"We want these returns to be voluntary. We don't oblige anyone to go back to Syria under any circumstance."

But this program is at the heart of a spat between the United Nations refugee agency and the Lebanese government, with the latter frustrated that the U.N. is not doing more to encourage refugee returns.

Rula Amin, the spokesperson for U.N. High Commissioner for Refugees in the Middle East and North Africa, told NPR that the refugee agency was not involved with Thursday's returns to Syria. The U.N. has stringent guidelines on conditions that must be met before it can guarantee a "dignified" and "sustainable" return for refugees, she said. Those guidelines have not yet been met.

"That's why we say that at this point in Syria, because of the complex situation on the ground both politically and from a security perspective, we are not encouraging — nor are we organizing — the return of Syrian refugees from the countries of asylum around Syria, including Lebanon," she said. "But we do respect people's choices if they choose to go back." 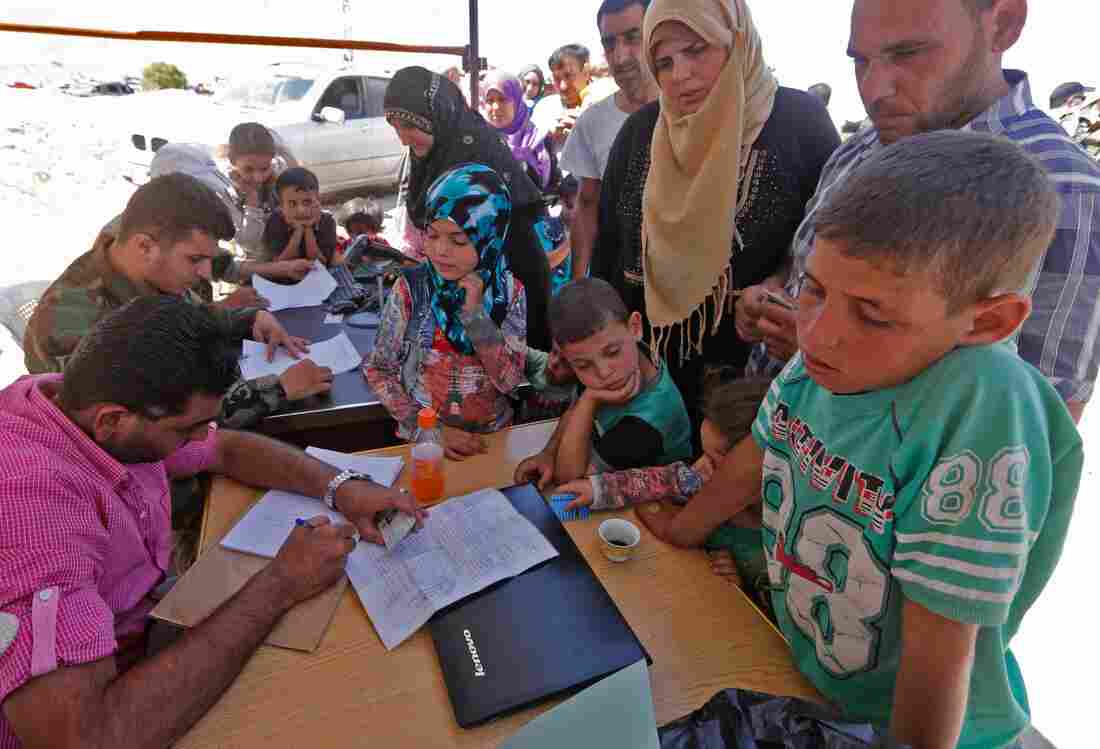 Syrian refugees get an identity check on the Lebanese side of the al-Zamrani crossing between Lebanon and Syria on Thursday. Louai Beshara/AFP/Getty Images hide caption 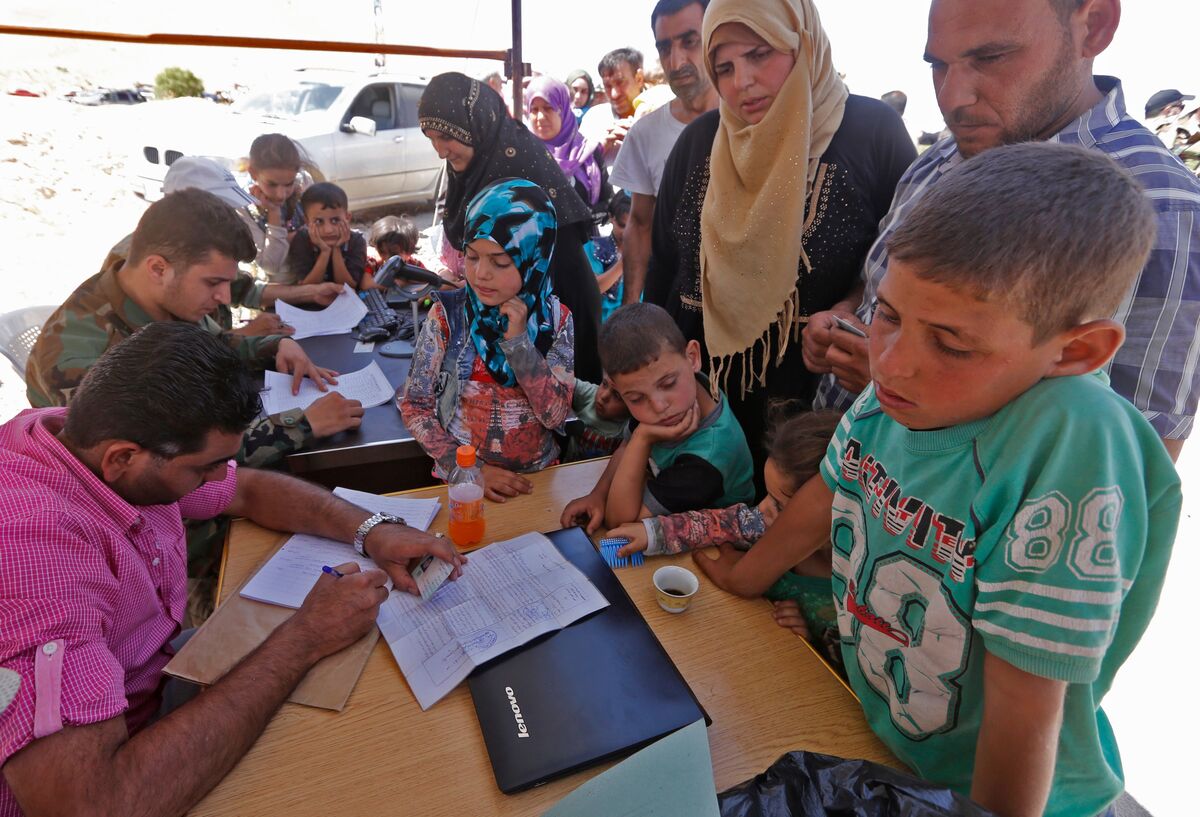 Syrian refugees get an identity check on the Lebanese side of the al-Zamrani crossing between Lebanon and Syria on Thursday.

The issue of returns has also sparked intense debate within the refugee community in Lebanon. In the border town of Arsal, home to an estimated 50,000-plus Syrians, some refugees said they believed it was time to try to rebuild their lives in their own country. But many feel it's too soon.

Men of fighting age fear they will be drafted into the Syrian military and placed on one of the country's many active front lines. Others express concern about the influence of warlords and militias. Many said they do not trust the Syrian regime, which has imprisoned and tortured tens of thousands of its opponents.

Youmna, a 40-year-old mother of three, has a brother accused of working with the opposition. He disappeared into the regime's network of notoriously brutal jails. She fears the Assad regime may not stay true to assurances it has made to the Lebanese government that those who return won't be arrested, or worse.

"I don't believe the Syrian government," she said, speaking inside her tent, its plastic sides covered in a heavy blue velvet blanket. "We don't know what our future is here if we stay here, but we are too afraid to go back."

On Thursday, those who'd been told by Lebanese authorities that they could safely return gathered at dawn on a dusty patch outside Arsal to wait for the Lebanese army's permission to cross. They arrived on tractors, in cars and minibuses, all crammed full of possessions they'd accumulated during the years spent as refugees living in camps nearby. One family strapped in a coop full of chickens alongside the kitchen pots and pans. Another brought their pet canary in a cage.

Emotions ran high as they waited to leave. While some refugees looked excited, others mourned imminent separation from loved ones. Seventy-three-year-old Fatima Rifai huddled, weeping, with her nine adult children and grandchildren.

"We are preparing to say goodbye," she said.

She and her husband were returning to their hometown of Yabroud, set in the hills near the Syrian capital Damascus, to investigate the situation for the rest of the family.

"Pray for us," she said. "I don't know if our house is still standing. If we find our house, we will live there."

Editor's note, July 3, 2018: In an earlier version of the audio, the wrong clip of a woman speaking Arabic was heard. The correct Arabic clip has been inserted.