Accessibility links
Far-Right And Antifa Groups Clash In Portland, Ore. Portland Police made four arrests Saturday and five people were reported injured, including one officer, after the clashes in the city's downtown.

Police Declare A Riot After Far-Right And Antifa Groups Clash In Portland, Ore.

Police Declare A Riot After Far-Right And Antifa Groups Clash In Portland, Ore. 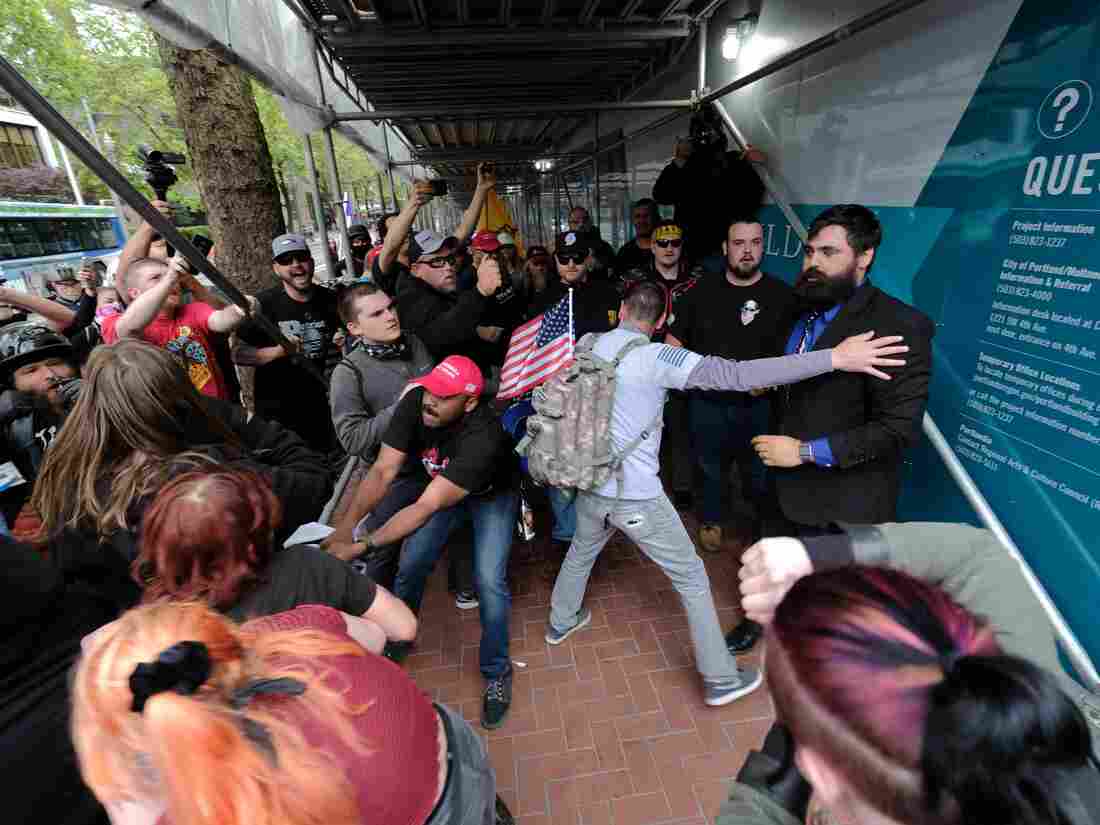 Saturday's clashes were not the first of their kind. (Above) Antifa counterprotesters fought with far-right Patriot Prayer supporters during a march in Portland, Ore., on June 3. Anadolu Agency/Getty Images hide caption 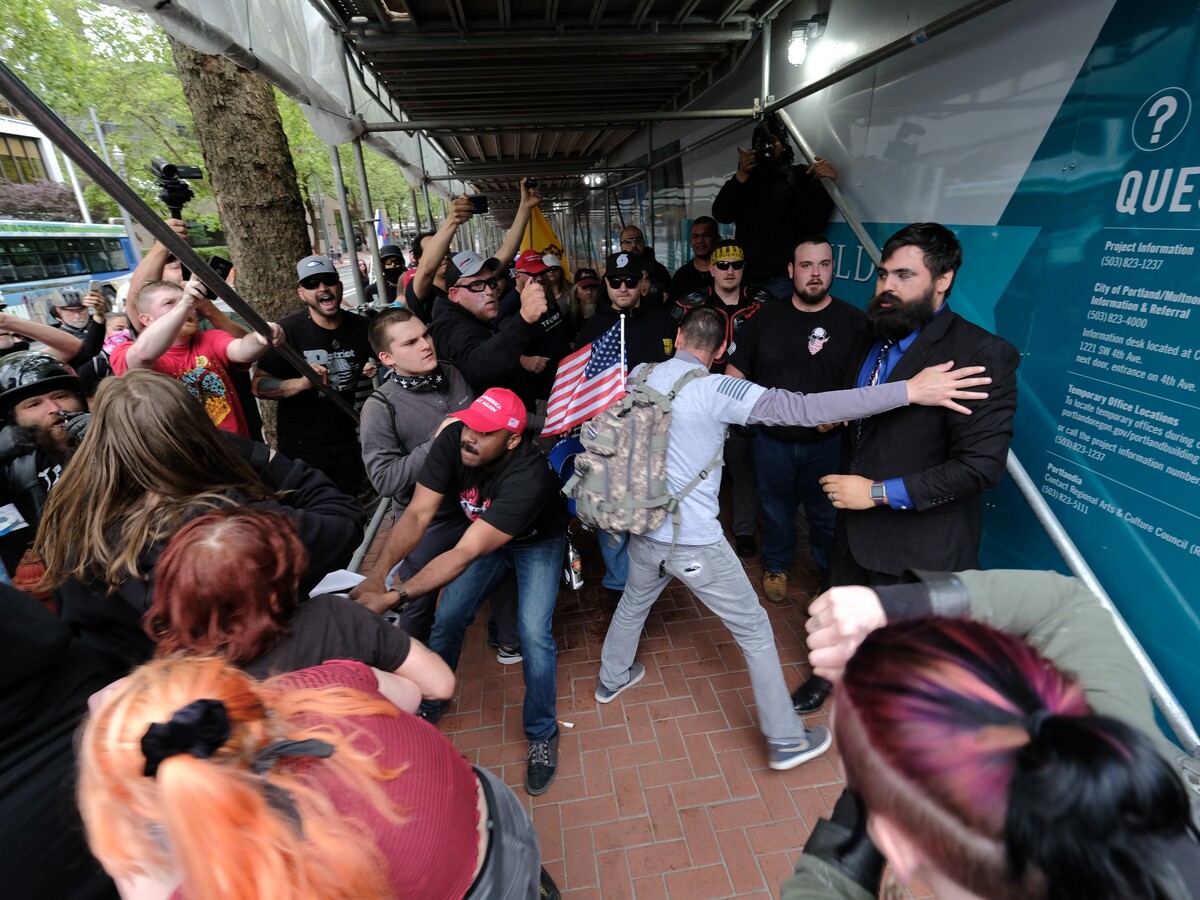 Saturday's clashes were not the first of their kind. (Above) Antifa counterprotesters fought with far-right Patriot Prayer supporters during a march in Portland, Ore., on June 3.

What began in downtown Portland, Ore., on Saturday as a permitted march by the far-right group Patriot Prayer was quickly declared a riot and halted by police after altercations with anti-fascist counterprotesters escalated, with reports of projectiles causing several injuries.

Four people were taken to area hospitals by ambulance, one with a serious but not life-threatening injury and the other three with non-serious injuries. Additionally, a patrol vehicle escorted one police officer who experienced non-serious injuries to a hospital, according to a statement by the Portland police department.

Police arrested four individuals, though all were in connection to events prior to Saturday's events.

Supporters of Patriot Prayer, led by its incendiary leader Joey Gibson, who is also running for a U.S. Senate seat in Washington state, began to assemble in parks along Third Avenue in downtown Portland early Saturday afternoon.

Far-left antifa protesters congregated in similar or greater numbers nearby.

The two groups lobbed insults at each other across a heavy law enforcement presence, clad in riot gear, there to keep the two sides apart and screen for weapons.

Officers have made probable cause arrests in today's demonstration around Terry Schrunk Plaza and Chapman Square. Ofcs are also seizing weapons. pic.twitter.com/6h3DDlQWgL

Around 6 p.m. local time, Patriot Prayer initiated its permitted march, working its way along Third Avenue. But projectiles quickly began flying. Police then cancelled the permit, used bullhorns to declare the situation a riot and deployed flash bangs and rubber bullets to disperse the crowds.

Portland police have officially declared a riot and are ordering people to leave immediately. pic.twitter.com/yIJKOq1s93

"We seized numerous weapons early on, and interceded and separated people when necessary. However, once projectiles, such as fireworks, eggs, rocks, bottles and construction equipment were thrown and people were injured, we ordered people to disperse," Deputy Police Chief Bob Day said in a statement.

Portland police disputed rumors that they had used tear gas.

They also said the four arrests made were not in relation to Saturday's protests, and all were connected to investigations that began in early June and, in one case, late May.

In its statement, the police department also said it is aware other "criminal behavior" was recorded that may include disorderly conduct, assault, theft, among other crimes. They encouraged tips and said there may be more arrests "at a later time."

The Federal Protective Service, among the law enforcement present Saturday, shut down the Terry Schrunk Federal Plaza as local police declared a riot.

Police are now declaring this event a riot. People must leave the area immediately.

Before Saturday, Eugene Antifa, a far-left group, posted on Facebook its intention to stymie groups like Patriot Prayer. "It is very important that antifascists keep up the pressure so that we can stop them once and for all," it wrote.

During the protests, one of the far-right protesters later arrested by police, Tusitala "Tiny" Toese told KGW that his commitment to his Patriot Prayer "family" was unflappable. "If I have to die next to my family, to my brothers and sister (sic), that's standing up for freedom in America, I will have to," he said.

The Southern Poverty Law Center wrote last year that Patriot Prayer had "trolled the Northwest with a series of rallies designed to provoke violence." The group was behind a rally in San Francisco last year that was cancelled before it took place, after many had anticipated violent clashes.

Earlier last month, a "goodbye party for a prominent conservative activist transformed into a clash between the left and the right," according to the Portland Tribune.

Last year saw thousands skirmish in fights between Patriot Prayer and counter-protesters at a rally following a stabbing on public transportation after a man reportedly harassed a woman wearing a hijab, as NPR's Maquita Peters reported.

Separate "Families Belong Together" protests — decrying the Trump administration's now rescinded policy of separating families at the border — erupted in cities around the country Saturday. Another part of downtown Portland played host to one such rally Saturday.