Accessibility links
Wildfires Spread In Northern California "These fires are extremely aggressive and extremely fast moving," says an official with the California Department of Forestry and Fire Protection. About 300 people have been forced from their homes. 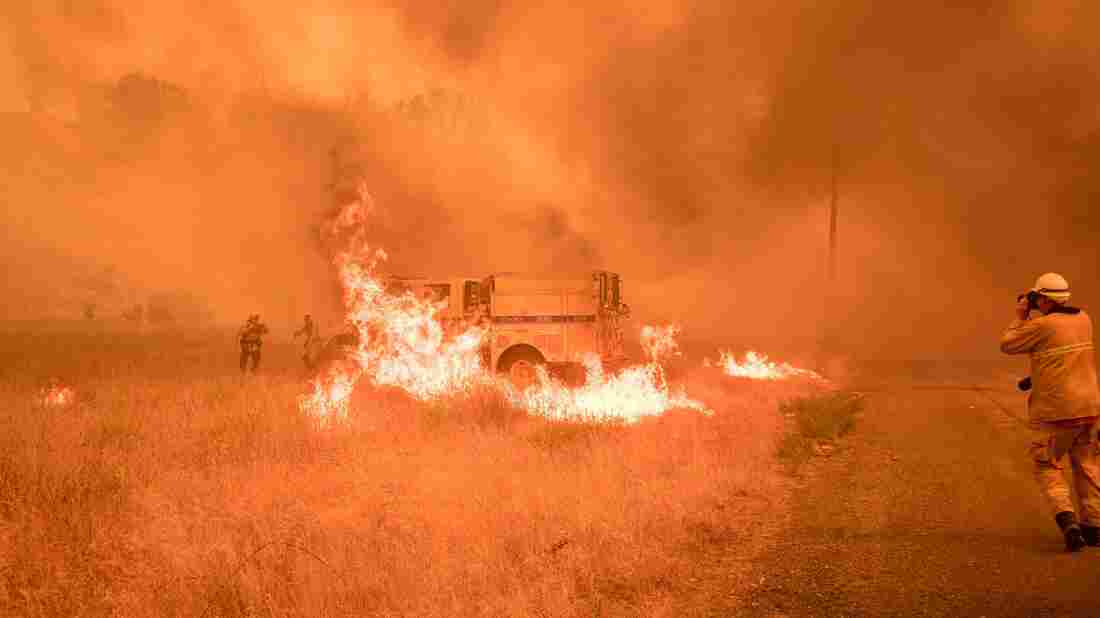 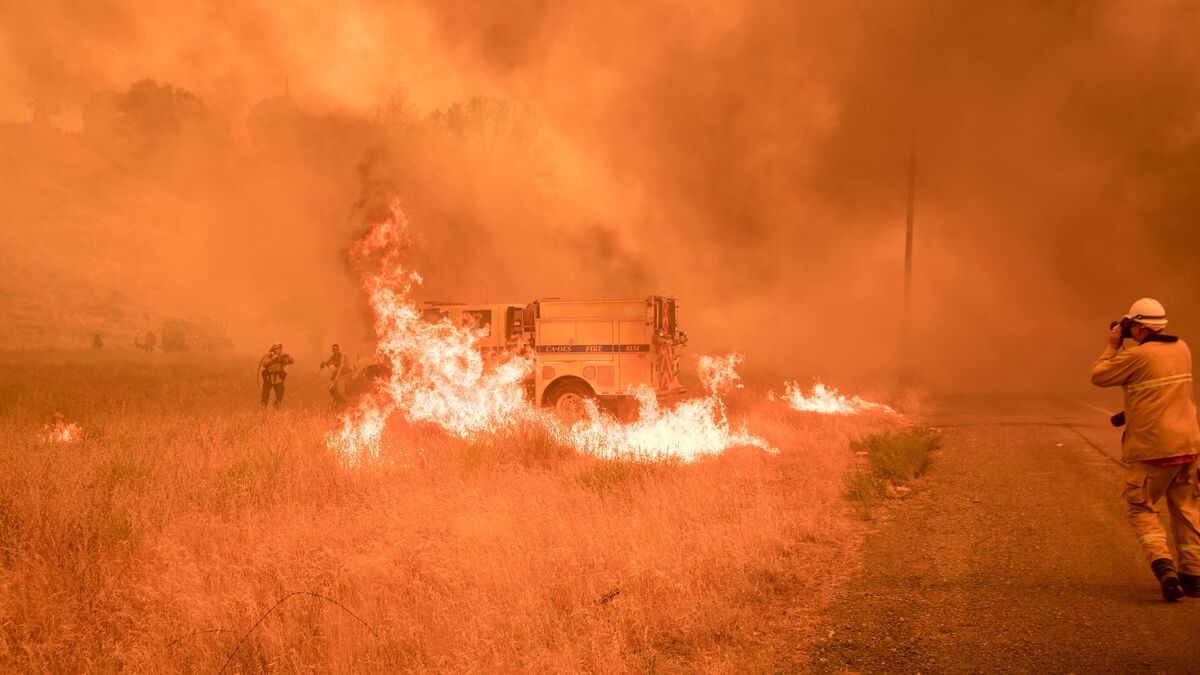 Firefighters scramble to control flames surrounding a fire truck as the Pawnee Fire jumps across a highway near Clearlake Oaks, Calif.

Two major wildfires in Northern California have rapidly spread, forcing about 300 people from their homes. The County Fire is only 3 percent contained, according to the California Department of Forestry and Fire Protection, and is continuing to grow. The fire is threatening more than 100 structures so far.

The County Fire started Saturday afternoon, grew by 12,000 acres Sunday night and had scorched more than 60,000 acres by late Monday. Smoke from the fire has blanketed skies over nearby counties.

#CountyFire [update] Due to the potential threat posed by the County Fire, the Napa County Sheriff’s Office has issued an Evacuation Advisory for the Berryessa Highlands, Markley Cove, and Pleasure Cove Resorts. pic.twitter.com/4zwz6xFpQb

"You can see the smoke and you can see an orange-red glow from the flames," Autumn Edens of the Yolo County town of Guinda, near where the fire began, told The Associated Press. "It looks like a movie. I've never seen a fire like that up close, and it's an intense feeling."

On Monday, the National Weather Service Sacramento said on Twitter, "Due to a wind shift yesterday, smoke from the #CountyFire has moved into the Sacramento Valley and continues to impact the Bay Area as well."

Over the weekend, San Francisco Bay Area residents woke up to orange skies and a dusting of smoke and ash. The San Francisco Department of Emergency Management issued an air quality advisory and respiratory alerts on Sunday, cautioning children, the elderly and people with heart or lung conditions to avoid exertion.

Due to a wind shift yesterday, smoke from the #CountyFire has moved into the Sacramento Valley and continues to impact the Bay Area as well. Smoke appears brown on top of white marine layer #cawx pic.twitter.com/LVbUUm5ksK

A second wildfire was also burning to the northwest of the County Fire. The Pawnee Fire broke out more than a week ago and has consumed about 14,700 acres. CalFire says it is 75 percent contained.

Air crews and firefighters were dropping water and flame retardant on both wildfires and digging firebreaks. Residents in some areas affected by the County and Pawnee fires have been told to leave their homes.

The sky over San Francisco today from the Yolo County Fire.#countyfire pic.twitter.com/auVcITZomW

In Northern California's wine country, the fires have brought back memories and fears of last year's devastating wildfires. Savannah Kirtlink told AP, "A lot of friends and family were texting today and saying they were having some PTSD." Kirtlink had to evacuate her Napa home as the flames raged in December and told the news service that she empathized with those residents having to leave their homes now. "I'm imagining what they're going through," she said.

Much as with last year's wildfires, winds are blowing the flames in a southwesterly direction. Scott McLean, deputy chief of the California Department of Forestry and Fire Protection, told the San Francisco Chronicle that windblown embers are making containment more difficult.

"These fires are extremely aggressive and extremely fast moving," McLean said. "It's not a joke. People need to be prepared."

He added: "We are getting long-range spotting as embers are being thrown way ahead of the fire. This fire has definitely grown a lot faster than the previous fires there."

A man in the town of Colusa who was helping to bulldoze firebreaks ahead of the County Fire told the Chronicle: "We couldn't catch up to the wind, it was blowing it so fast. We got right in the middle of it. We were in some big, big fire. The best word I can come up with is hectic."

As the Chronicle reports:

"After years of drought, the trees, brush and grass are still 'stressed out,' despite the rainstorms the region has received since 2017, and that has resulted in aggressive fire activity, McLean said.

" 'The rain is not helping as individuals think it does,' McLean said. 'We need to have several years of significant winter storms to reach that plateau of where we need to be.' "