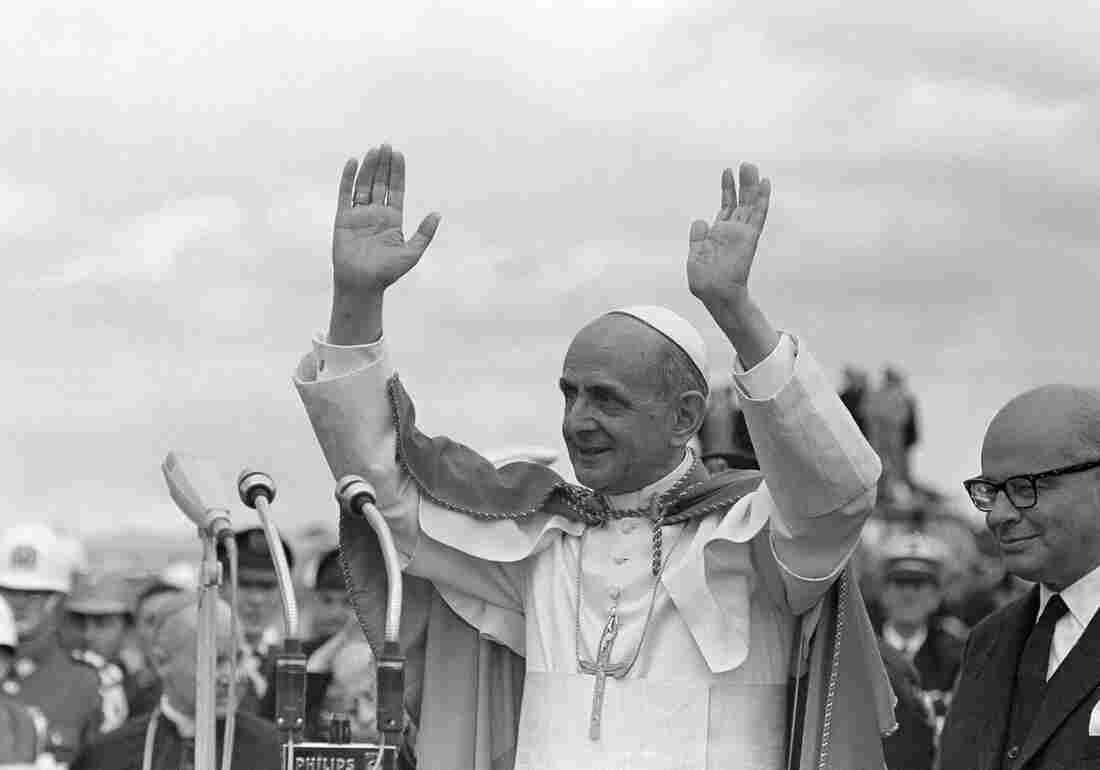 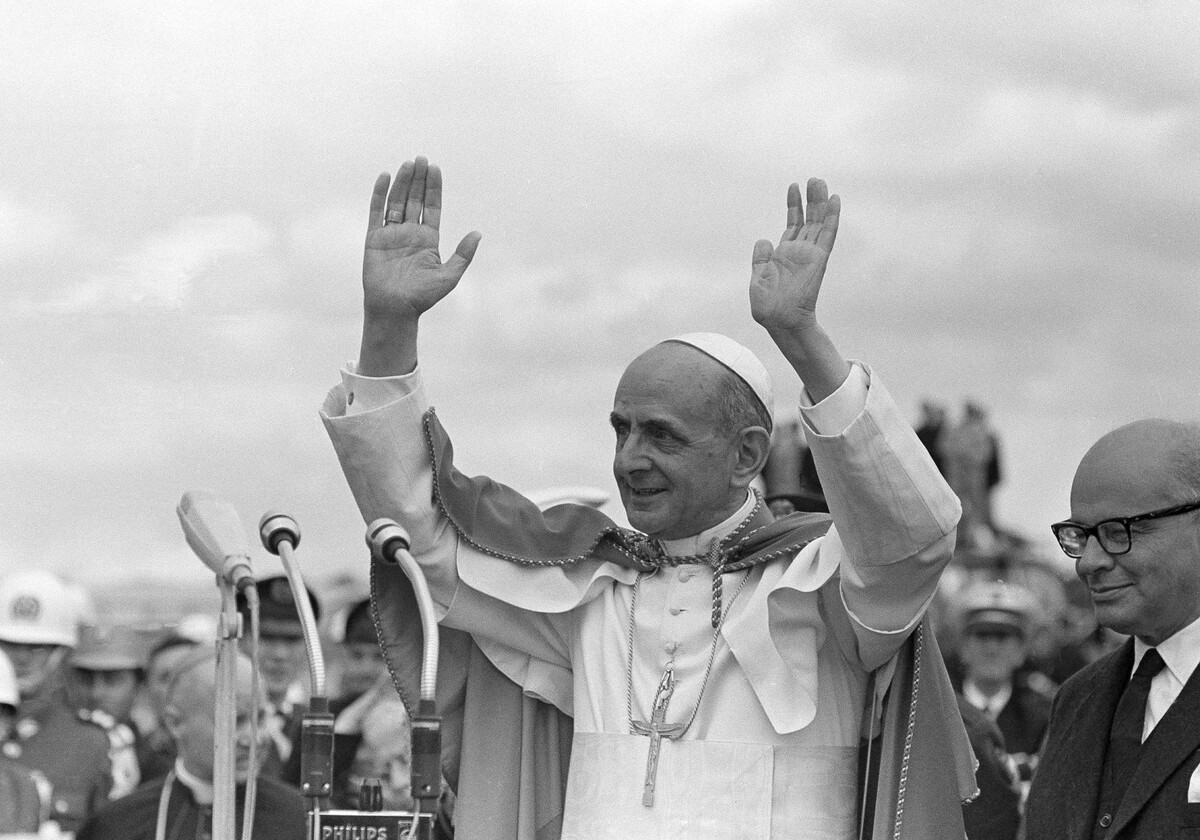 A papal encyclical issued 50 years ago this summer marked a turning point in the way Roman Catholics view the teachings of their church.

On July 25, 1968, Pope Paul VI stunned Catholics around the world with his announcement of Humanae Vitae, "Of Human Life," a document in which he forcefully reaffirmed the church's previously stated position on the use of artificial birth control, calling it "intrinsically wrong."

"We are obliged once more to declare that [methods for] the direct interruption of the generative process," the pope wrote, "... are to be absolutely excluded as lawful means of regulating the number of children."

Humane Vitae came as a surprise to many Vatican observers. Though an encyclical issued in 1930 already prohibited birth control, a papal commission had been assembled to revisit that ban, and a majority of the commission members suggested that it be dropped. Moreover, a Vatican II document stipulated the right of man "to follow his conscience."

Indeed, Catholics were already using contraception. The birth control pill had been legalized by a Supreme Court decision, and a 1965 survey of Catholic women found that more than half were using some forbidden contraceptive method. By 1973, that proportion had grown, with two of three married Catholic women reported to be relying on birth control to avoid pregnancy. The Humanae Vitae encyclical apparently had had little effect.

"I think in the minds of a lot of Catholics, [the reaction was], 'We're not going to pay any attention to this,'" says Mark Massa, a Jesuit priest the dean of theology at Boston College. "[They thought,] 'the church doesn't know what it's talking about on bedroom issues.'"

For Massa, author of The American Catholic Revolution: How the '60s Changed the Church Forever, the 1968 birth control encyclical had the effect of weakening church authority among the Catholic laity.

"When people see what they regard as a bad law, it breeds contempt for good law," Massa says, "and I think that's exactly what happened with Humanae Vitae. People started to say, 'Well, maybe the church's position on a whole realm of other things was equally mistaken. What else did the church get wrong?'"

One recent survey found that large majorities of U.S. Catholics now think it's possible to be a "good Catholic" without going to church every Sunday or obeying the church's teachings on divorce, remarriage, birth control, or abortion.

Roman Catholics And Evangelicals Move Apart In Their Political Priorities

"Many of these things would previously have been accepted as imposed from above," says Mary Gautier of the Center for Applied Research in the Apostolate (CARA) at Georgetown University. "Catholics [in the 1950s] were very much in the mindset of 'Pay, pray, obey.'"

No longer. "They feel very strongly that they're being good Catholics by taking under advisement what the pope says and what the bishops say, but making up their own minds," says Gautier, "based on their own situation, their own conscience."

For Jerry DeMers, 61, a lifelong Catholic in Milwaukee, the inclination to think independently of church teaching began with his reaction to the Humanae Vitae finding that the use of artificial contraception was a mortal sin.

"One of the things I learned in high school is that mortal sin means you are making a fundamental option to turn from God," DeMers says. "Contraception didn't seem to fit that. It didn't make sense."

Among younger Catholics, whether to use artificial birth control is now largely a moot question.

When Krista Sanders, 32, attended a marriage workshop with her husband at St. Sebastian Catholic Church in Milwaukee, she learned that her church was still promoting the "rhythm method," which advocates avoiding sex during the part of the month a couple is most likely conceive, as the only acceptable way to avoid pregnancy. It did not impress her.

"They give you handouts with all these testimonials about natural family planning, with testimonials from couples who have done it," Sanders says. "But I don't know that very many people follow it. It's kind of, like, 'O.K., that's a nice suggestion. I appreciate the information.' But in this current day, I don't know that it's as relevant for couples like us or other people starting out their marriages in the Catholic faith."

The challenge to Catholic authority these days is increasingly around marriage and family issues.

The modern reality of marriage and family

Marriage in Roman Catholicism is a sacrament, a covenant meant to be perpetual and designed to produce a family with children. It does not end with divorce. A failed marriage must be invalidated by the church. If Catholics remarry without that annulment, the new marriage is not recognized by the church, and they should not receive communion.

As with the birth control ban, however, the strictness of the marriage doctrine means many Catholics find themselves violating it. Marriage is hard. It doesn't always last, and family life can be challenging.

At St. Anthony on the Lake Catholic Church outside Milwaukee, a group of women gather each Wednesday morning to discuss the concerns arising in their daily lives. All are married, with children. Some, like Kate Wimmer, are divorced.

"So many times I just feel like I'm sort of failing as a parent," she tells the group. She is raising seven children, including one from a previous marriage and three stepchildren from her husband's previous marriage. "Then I come here and realize that everyone struggles."

The session is led by Kathie Amidei, a pastoral associate at St. Anthony. Having gone through a divorce herself, she tells the women how she had learned to take responsibility for her own parenting.

"I just kept believing that if I could be one good parent, I wouldn't screw it up," she said. "And that's what I teach with families that are going through divorce. You can't do anything about the other parent. But you can be that one good parent, and having one good parent changes the odds for a child, exponentially."

Not surprisingly, many Catholics who go through a divorce, Amidei says, end up feeling estranged from their church community.

"For a Catholic, there's an embarrassment that is different than even a loss through death," Amidei says. "It just has a particular stigma."

She realizes that the Roman Catholic emphasis on marriage as an unbreakable covenant is partly responsible for the stigmatization of divorce, but she does not see challenging doctrine as part of her mission.

"As a lay minister in the Catholic church, as a lay woman, I know what I can do and what I cannot do," she says. "I can just care for [someone going through divorce] as best I can and not make them feel that shame and guilt. In many cases, they can't stay married even if they want to, so to punish that person or make them feel worse just doesn't make any sense to me."

As a specialist in counseling Catholic women around divorce and family issues, Amidei is on the Catholic front lines, dealing with modern reality in the context of a continuing faith commitment to the church.

She knows what she is up against. To the extent the Catholic hierarchy clings to traditional doctrinal positions, whether on birth control or divorce, Catholicism may lose its hold among those who are questioning their relationship to the church.

That concern may have motivated Pope Francis two years ago when he issued a document urging priests to be sympathetic to Catholic couples in "imperfect" or "irregular" situations. 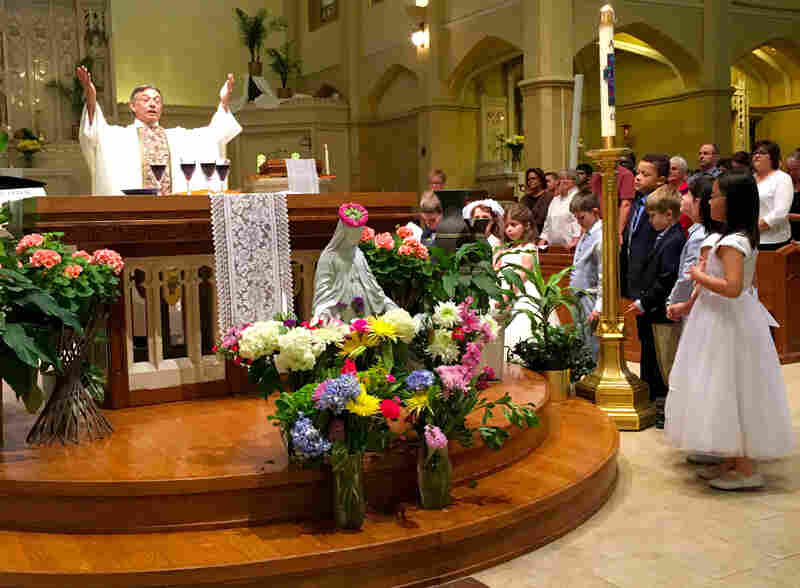 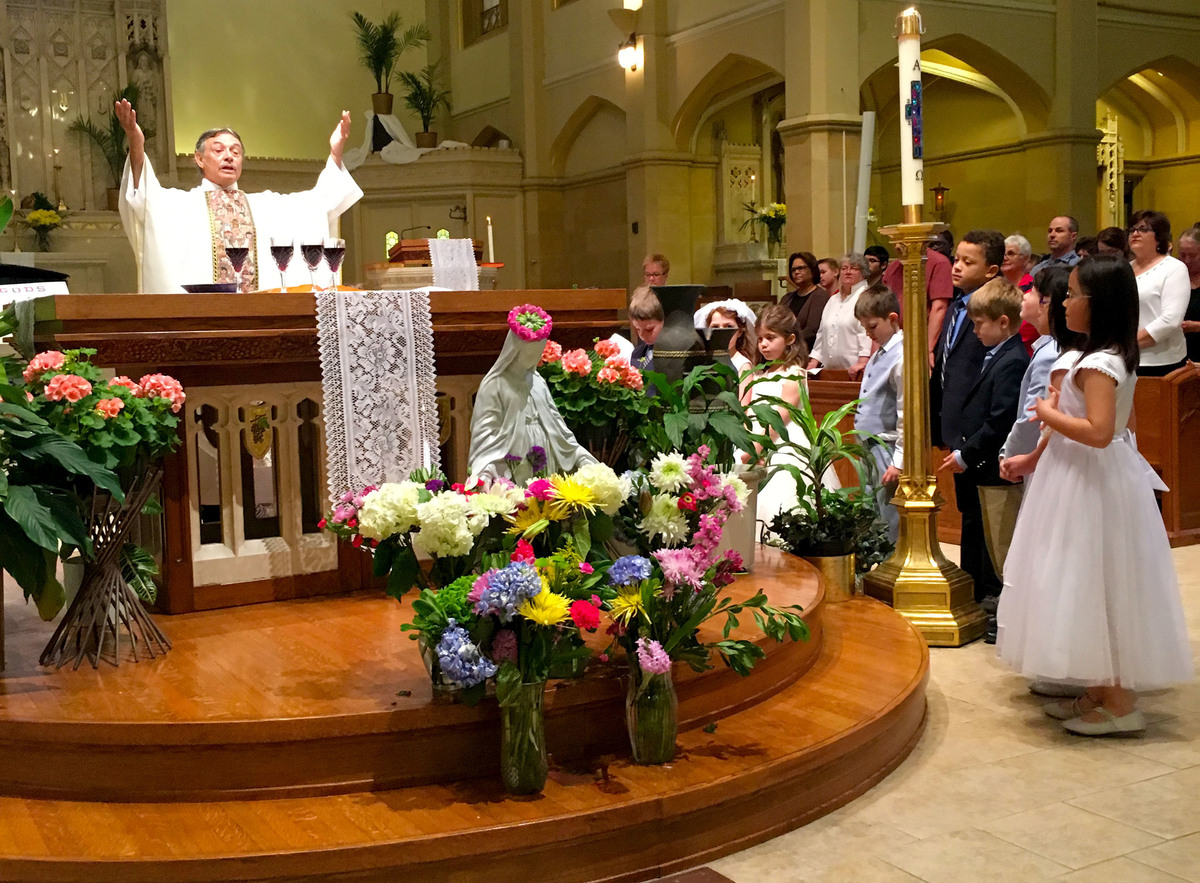 Father Larry Chapman, the parish priest at St. Sebastian in Milwaukee, said he now takes a looser approach when he explains church teachings.

Father Larry Chapman, the parish priest at St. Sebastian in Milwaukee, is among the priests who have responded to that papal call in his own pastoral work.

In a recent homily at a mass for children and their parents, Chapman pointed out how the presentation of church teachings has evolved over the years.

The answers were all in the Catholic Catechism, which young Catholics were obliged to memorize.

Some U.S. Catholics, however, are uncomfortable with the trend toward looser interpretations of traditional church doctrine, preferring orthodoxy.

"That's what a faith community is supposed to do – give you some guidance as to what the right path is," says Joanne Perleberger, who worships at St. Sebastian. "They're trying to appeal to as many people as possible, which is a good thing. On the other hand, it dilutes what the message is."

Indeed, the move toward a more tolerant approach under Pope Francis has prompted a counter-reaction among some Catholic conservatives.

Some are even revisiting the Humane Vitae encyclical that may have sparked the liberalization trend 50 years ago.

A recent conference convened in part by the Catholic Women's Forum featured speakers offering "Second Thoughts" on the Humane Vitae encyclical and the sexual revolution. Some speakers argued that the "contraceptive culture" that Paul VI foresaw turned out to be associated with things he predicted, including an increase in promiscuity, pornography, sex trafficking, and even abortions. Because no birth control method is 100 percent effective, an increase in casual sexual encounters has arguably led to more unwanted pregnancies, the presenters argued.

"Unlike our forerunners in 1968, those of us living today have access to something they didn't," said Mary Eberstadt, a widely published Catholic writer, "50 years of sociological, psychological, medical, and other evidence about the revolution's fallout."

Some of the lines in Humanae Vitae, when stripped of mid-20th century cultural references, find echoes in contemporary concerns about nonconsensual sexual relations.

"A man who grows accustomed to the use of contraceptive methods may forget the reverence due to a woman," the pope wrote, "... and reduce her to a mere instrument of his own desires."

"This document that has been so controversial and in many places reviled," Eberstadt says, "actually called the shots on what the future would look like better than any other single source I could think of."

Revisionist views of the 1968 encyclical have even taken hold among some Catholics who have not abided by its teaching.

"I eventually did read Humanae Vitae," says Jerry DeMers, "and actually I get the [pope's] point, the prediction he makes that if we practice contraception as a society, we will have a breakdown of the family. Because we have separated sex from marriage."

U.S. Catholics however, show in their daily lives that the church's official prohibition of artificial birth control means little in practice, even if it has some value in theory. As a rule, married Catholic couples clearly believe they have a right to control the size of their families, no matter what the church says.

Catholic leaders, meanwhile, have to work harder to defend the legitimacy of church doctrine.

Milwaukee Archbishop Joseph Listecki offers what he admits sounds like a "simplistic" answer.

"It is adherence to the truth," he says, "how the church is challenged and formed by the Gospel over the years. To be consistent to that is important. Why? Because when you start to push yourself away from that consistency, that's when you lose the uniqueness. If we're supposed to be like everybody else in the secular world, then we're not going to be the Catholic church."

In truth, however, U.S. Catholics may already be less Catholic than they used to be. Fifty years ago, about half of all Catholic children in the U.S. were educated in Catholic schools, according to CARA data. Now, it's barely 20 percent.

"It suggests a gradual social change is occurring," says CARA researcher Gautier. "The American Catholic church is assimilating ever further into American culture."