Accessibility links
Roe v. Wade: Does Donald Trump Want The Next Justice To Outlaw Abortion? The apparently mixed signals of the moment do not really suggest any further evolution in the president's abortion thinking. They suggest a strategy for confirming whomever the president picks. 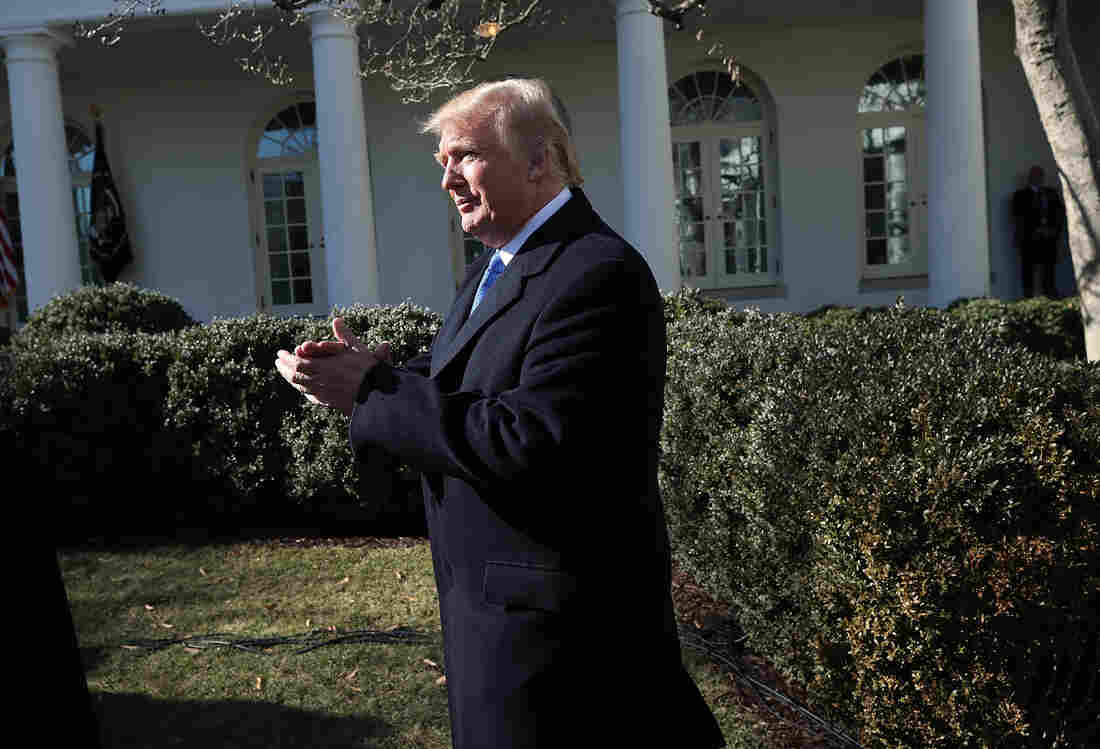 President Trump spoke to March for Life participants and pro-life leaders at the White House on January 19. He has been signaling that he won't ask potential Supreme Court nominees about their positions on specific cases, but he doesn't need to — all on his short list are conservative judges. Mark Wilson/Getty Images hide caption 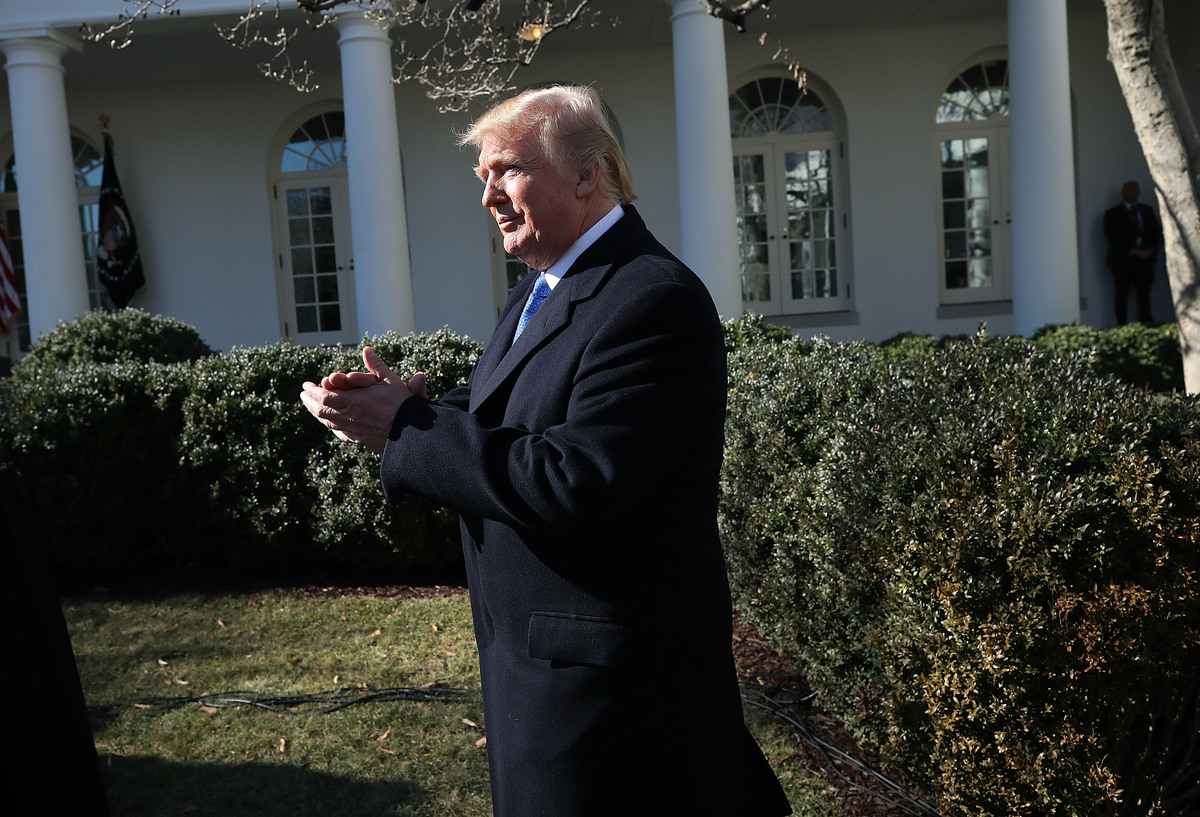 President Trump spoke to March for Life participants and pro-life leaders at the White House on January 19. He has been signaling that he won't ask potential Supreme Court nominees about their positions on specific cases, but he doesn't need to — all on his short list are conservative judges.

President Trump has vowed not to ask prospective members of the Supreme Court about their views on Roe v. Wade, the basis for legal abortion nationwide since 1973 and the most widely discussed legal case in America in the past half-century.

President Trump also made a rather different promise to voters in 2016 in his third televised debate with Hillary Clinton. He said Roe would be overturned if he got to change the balance on the court:

So the issue could not have been a more salient criterion for prospective Trump nominees then, but now the president vows not to even raise the issue with prospective nominees.

Has the president changed his mind on abortion?

It would not be the first time. He called himself "strongly pro-choice" when seeking the Reform Party nomination for president almost 20 years ago. Then, running as a Republican in 2016, he told primary voters his views had "evolved."

But the apparently mixed signals of the moment do not really suggest any further evolution in the president's thinking. They suggest a strategy for confirming whomever the president picks.

Gorsuch was named to fill the vacancy left by the death of Antonin Scalia and then kept open by the refusal of the Senate's Republican majority to consider Merrick Garland, the replacement named by President Barack Obama in 2016.

Gorsuch was greeted with delight by abortion opponents, even though he had not ruled directly on Roe in his judicial career. But his confirmation was far from a sure thing because two Republican senators, Susan Collins of Maine and Lisa Murkowski of Alaska, were seen as defenders of abortion rights.

What's Ahead As The Supreme Court Term Ends

What's Ahead As The Supreme Court Term Ends

So then, as now, the president said he wasn't even going to bring up the case he had promised would be overturned "automatically" by the justices he would name as president.

When Gorsuch got to his confirmation hearings with the Senate Judiciary Committee, Connecticut Democrat Richard Blumenthal asked about what he called "the Trump litmus test" on abortion.

Gorsuch said he would have "walked out the door" if Trump had asked him to overturn Roe. And that seems to have been enough for Collins and Murkowski, who both voted to confirm.

Yet abortion opponents at the time fully expected him to join other conservatives in overturning the 1973 landmark, and they still do.

Many have called the filling of this next seat the moment they have waited decades for, because this seat had belonged to Justice Anthony Kennedy, who voted to uphold Roe in the past (while also voting to allow numerous restrictions on abortion).

Yet with the Senate Republican majority down to 51 to 49 and Sen. John McCain being treated for cancer at home in Arizona, Trump's next nominee is even more vulnerable to potential no votes from Collins or Murkowski.

Over the weekend, Collins told Jake Tapper of CNN that she "would not support a nominee who demonstrated hostility to Roe." On Sunday, she told ABC News' Martha Raddatz she had shared this with the president and discussed it with Murkowski as well.

Sometimes, the president likes to put Republicans on the spot, but in this case that could be too costly.

Trump would rather give the GOP senators who are abortion-rights supporters a plausible path to vote for his nominee and a way to explain that vote down the road.

And unless he brings forth someone with a "demonstrated hostility" to the case, he will, in all probability, succeed.

In the meantime, will Trump's anti-abortion-rights supporters be disturbed to hear him telling the world that Roe is not a litmus test? Will they be upset at this signal sent to Collins and Murkowski?

Perhaps, but it is more likely they will trust Trump to do what they expect him to do and say whatever he needs to say to make it happen.

They have the example of the Gorsuch nomination a year ago.

On the other hand, the president can be rather mercurial. The weekend brought a fresh and truly remarkable example of his bravado in this regard.

On Twitter, Trump disowned two pieces of legislation on immigration that he had tried to rally support for that same week.

I never pushed the Republicans in the House to vote for the Immigration Bill, either GOODLATTE 1 or 2, because it could never have gotten enough Democrats as long as there is the 60 vote threshold. I released many prior to the vote knowing we need more Republicans to win in Nov.

Any Twitter user could scroll down a few messages to find this, shouted in ALL CAPS.

HOUSE REPUBLICANS SHOULD PASS THE STRONG BUT FAIR IMMIGRATION BILL, KNOWN AS GOODLATTE II, IN THEIR AFTERNOON VOTE TODAY, EVEN THOUGH THE DEMS WON’T LET IT PASS IN THE SENATE. PASSAGE WILL SHOW THAT WE WANT STRONG BORDERS & SECURITY WHILE THE DEMS WANT OPEN BORDERS = CRIME. WIN!

Remarkably, the president did not even bother to delete the all-caps message he had sent three days earlier.

Moreover, even a cursory review of recent news stories reminds us that the president actually traveled to Capitol Hill the week before the vote to urge passage of either of the immigration bills pending in the House.

White House press secretary Sarah Sanders on Monday, however, said the president didn't lie about his position. She contended instead that the president wasn't "aggressively lobbying" for either bill, because Democrats would make it so that neither bill could pass. (Never mind that only a majority is needed to pass legislation in the House, and Republicans are that majority.)

In the end, one version of the bill got 193 votes and the other just 121, both far shy of the number needed to pass. The second version barely got half the votes of Republicans.

For the president to turn on the leadership in this way — for no apparent reason other than to avoid being associated with a loss — might have a chilling effect on those who rely on his promises in the future.