Accessibility links
Read 'The Cabin At The End Of The World' And You Won't Sleep For A Week Paul Tremblay's new novel is the best (and scariest) kind of horror — the quiet, believable kind of story that doesn't involve possessed dolls or body doubles, and could absolutely happen to you. 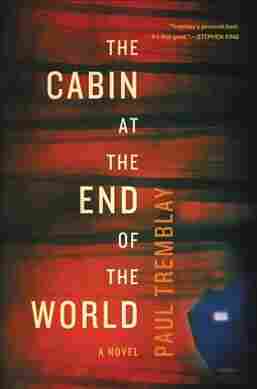 The Cabin at the End of the World

The worst kind of horror plays for shock — for extremes of blood and gore and screaming nonsense. It is instantly recognizable for existing in a universe too far gone from our own to truly haunt anyone still tethered to the everyday.

The best kind of horror is soft. Quiet. Almost gentle in its handling of fear. It is rooted firmly in the real. It could happen tomorrow, to any of us.

The Handmaid's Tale is good horror. Rosemary's Baby, a kind of half-and-half mix (very real pregnancy body horror with a little Faust thrown in). Stephen King's Christine? That's like Knight Rider with more murder and an evil goatee. Fun, sure, but it won't keep you up at night unless you already possess an unnatural fear of your Tercel.

Read Paul Tremblay's new novel, The Cabin at the End of the World, and you might not sleep for a week. Longer. It will shape your nightmares for months – that's pretty much guaranteed. That's what it's built for. And there's a very, very good chance you'll never get it out of your head again.

I want to tell you everything about it. I want to detail every switchback and psychological reverse that happens, deconstruct how Tremblay layers in these genius feints of paranoia and disbelief, explain how he builds to these perfect trigger points where everything explodes into blood and violence, then settles, then starts again.

I want to, but I can't. It would ruin it. There is a meticulousness to The Cabin that depends entirely on the slow reveal; on the tension of misunderstanding and inherent bias. I wreck that, they take away my library card. Strip me of the ascot and monocle that come with being a Big Time Book Critic.

It begins with Wen, adopted daughter of Daddy Andrew and Daddy Eric, a gay couple who have rented a vacation cabin on a lake deep in New Hampshire. There are no neighbors, no cell reception. It is cut off as much as any place can be in this modern world. Andrew and Eric are a lovely couple — worried about bears, about Wen wandering off and getting lost in the woods or not wearing enough sunscreen. Normal, rational, reasonable worries.

And then one day, Leonard comes wandering into the yard. A mountain of a man — huge, polite, gentle, dressed in jeans and a white shirt. He helps Wen catch grasshoppers, then says that he needs to talk to her parents about something very important. He needs to do it right now. And so do his friends.

His friends are Redmond, Sabrina and Adriane. They arrive together, walking up to the house in the same style outfit — jeans, button-down shirts of varying colors — and carrying weapons. Horrible, hammered-together, medieval-style weapons made of garden tools and long poles. They force their way into the house, tie up Eric and Andrew, apologize for the mess and for frightening everyone, then lay out their simple proposal: The world is coming to an end. They've all seen it. And only a terrible sacrifice made by Andrew, Eric and Wen can stop it.

I wish I could sit down with you over a couple beers and talk about 'The Cabin.' Maybe it would let me sleep better.

Everything that follows after is that set-up drawn out to torturous, logical, horrifying extremes. Leonard and his friends try to convince Wen and her fathers that there's a clock ticking and if they don't choose to help, everyone dies. Andrew and Eric try to talk the invaders down from their apocalyptic beliefs — from the visions of fire and flood that are haunting all four of them; that drove them to find this remote cabin and the people in it.

In another life, Leonard might be Richard Dreyfus in Close Encounters of the Third Kind. Know what made Dreyfus's Roy Neary a hero and not a villain? Being right. And that is the same game Tremblay is playing here: He doesn't weigh in on the truths of either side. Are Leonard and his friends just crazies who all found each other on some online forum and fed into the others' delusions?

That's on you to decide. And you will, ten times, five different ways. But that's all I'm going to say. Much as it pains me, we gotta be done here. Everything else, you have to just see for yourself even though, really, I wish I could sit down with you over a couple beers and talk about The Cabin. Maybe it would let me sleep better. Because to discuss something like this is to defuse it a little. It takes a bit of the edge off when a collective gathers to say, No, it's okay. No one is out there imagining the Last Days on the internet. No one is assembling weapons in their basement and folding their best white shirts. These things don't happen in the real world. Really, it was just a book.

Because it is, right?