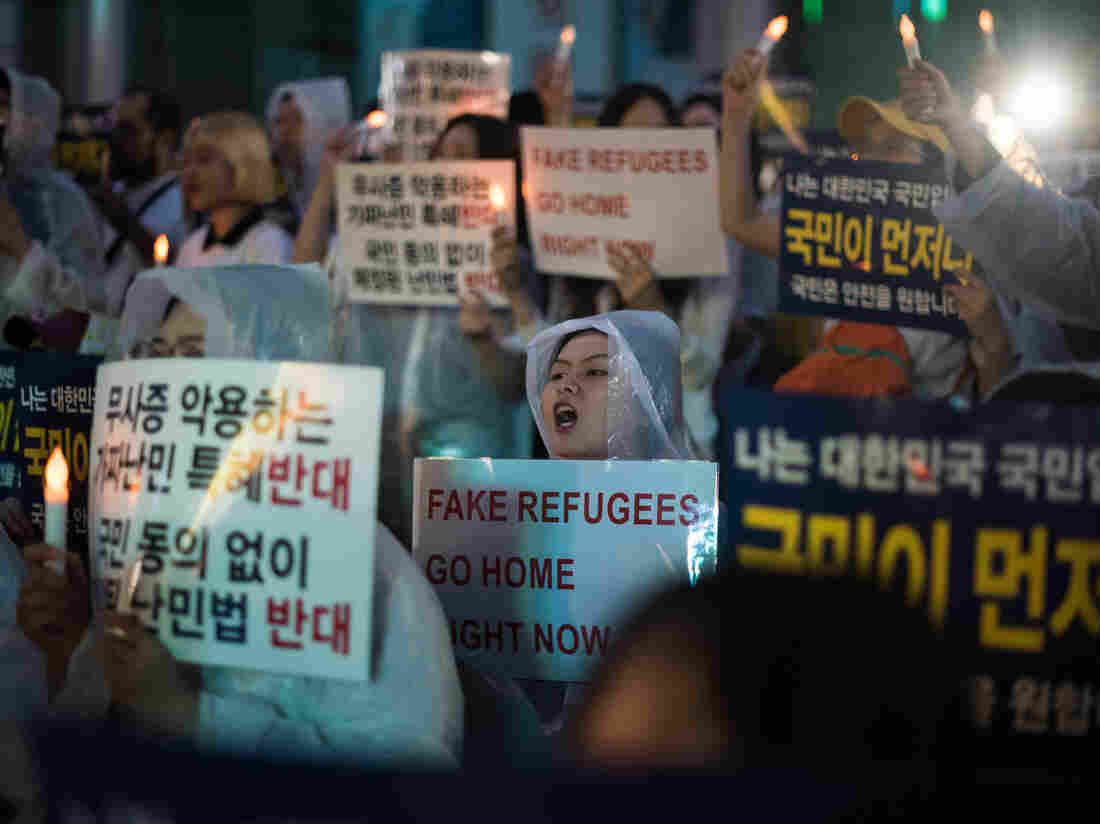 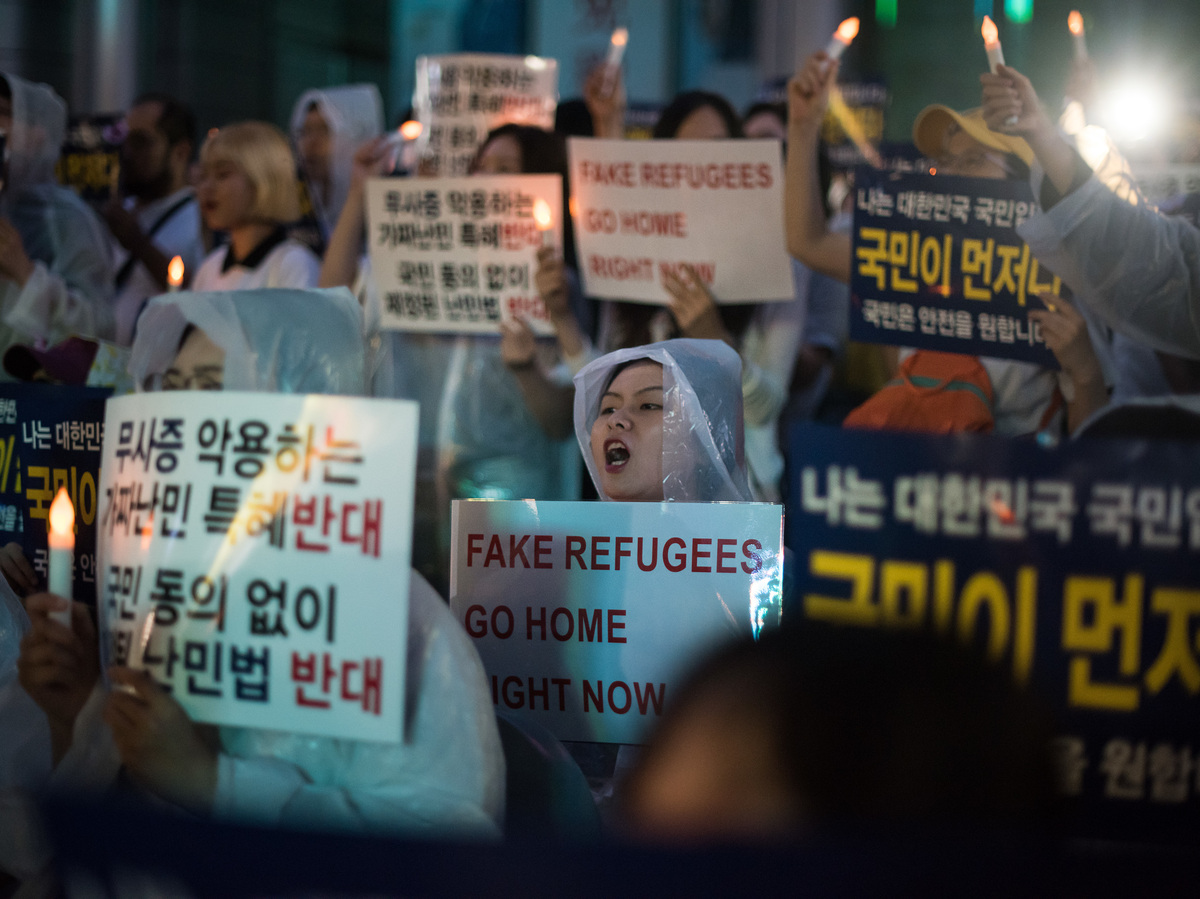 Fleeing war, more than 500 Yemenis arrived earlier this year in an unlikely place — a tiny South Korean resort island. They're hoping to be granted asylum so they can stay in South Korea, but as they wait on the island of Jeju, they've become the target of blistering backlash from South Koreans.

"I love Korea, really," Ebrahim Qaid says. He is one of 561 Yemenis who arrived on Jeju earlier this year through the island's policy of allowing most foreign nationals to enter without getting a visa in advance.

Qaid found work on a 29-ton boat in Hallim port, on Jeju's northwestern shore. He's taken to calling his Korean boss abogee, a term of endearment in Korean meaning "dad."

"I was a student in Yemen," Qaid says. "But because [of] the war, I need to work, help my family in Yemen."

His work is helping abogee weld floorboards and make fixes before the ship heads back out to sea in a month. He and other Yemenis are doing the kind of jobs most Koreans don't want.

The United Nations High Commissioner for Human Rights estimates that between March 2015 and August 2017, the war in Yemen killed more than 5,100 civilians and injured more than 8,700. 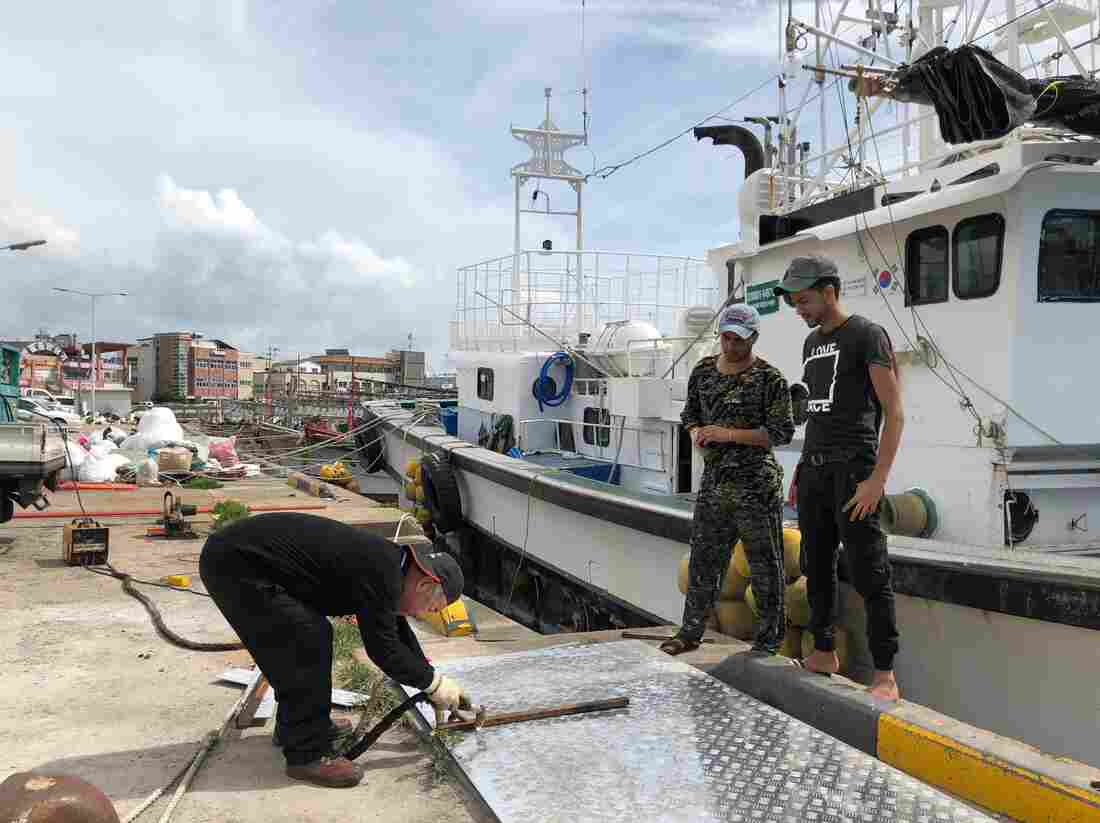 Ebrahim Qaid, right, is one of more than 500 Yemenis who arrived this spring in Jeju. He found work on a fishing boat in Hallim port. Elise Hu/NPR hide caption 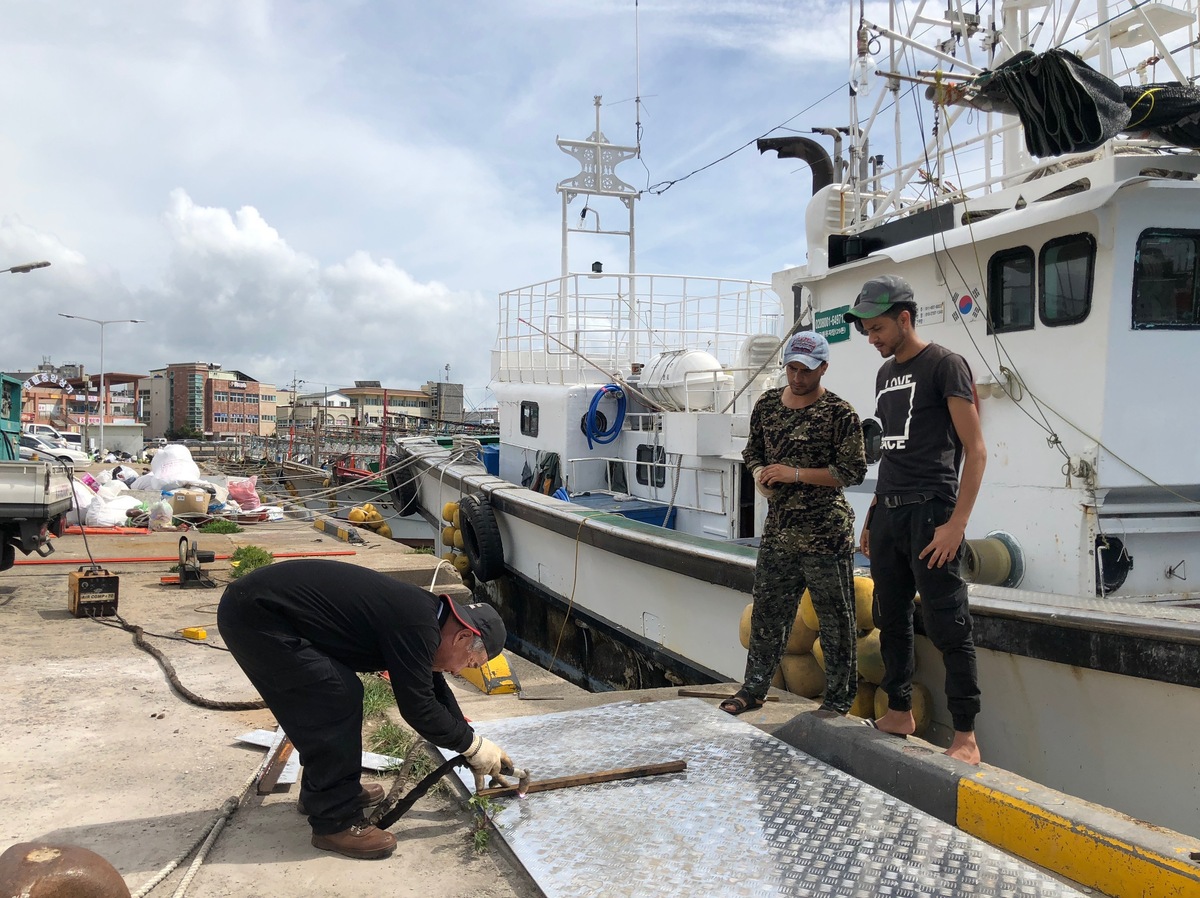 Ebrahim Qaid, right, is one of more than 500 Yemenis who arrived this spring in Jeju. He found work on a fishing boat in Hallim port.

The country is teetering on the brink of famine. The U.N. has called it "the worst man-made humanitarian crisis of our time."

Omar Al-wahaishi, another Yemeni in Jeju, says young men are being forced to choose sides and become conscripts. To avoid that, he fled.

"We refuse this kind of politics. We will not go fight, we don't want to fight," he says. "So if I go back to my city directly, I will be imprisoned or maybe executed. It's the same fate. Because if I go to prison, I will not get out."

If going home is not an option, staying in Jeju may not be possible either. The influx of Yemenis has thrown ill-prepared South Korea into a national debate over its responsibility in the global migration crisis.

"Citizens come first, we want safety," a crowd of nearly 1,000 chanted in the streets of Seoul last Saturday during a rally against refugees. Protesters held up signs calling Yemenis "FAKE refugees."

According to South Korea's justice ministry, last year the country approved 91 out of 6,015 refugee claims, or about 1.5 percent.

But demonstrators say that's still too much.

"They came here without proper legal process," says demonstrator Christopher Han. "We are in the position to help them. But the truth is that, the reality is that we have been used by them."

The main fears are over safety, Han says. "It is all about their different idea and belief system. I mean the Muslims," he says.

On June 1, President Moon Jae-in's government ended visa-free entry for anyone from Yemen, effectively closing the border to Yemeni refugees. Most of the Yemenis already on Jeju are blocked from leaving the island.

In Homogeneous South Korea, A Multicultural Village Hints At Change

Even so, the backlash appears to be growing. More than half a million South Koreans have signed a petition asking the government to turn away refugees.

"I didn't expect Korea to welcome refugees with open arms," says Sharon Yoon, a professor of Korean Studies at Seoul's Ewha University. She's not surprised since non-native Koreans make up only 4 percent of the country's population. Until 2007, the country's education system taught students it was ethnically homogeneous — a single-blooded nation. 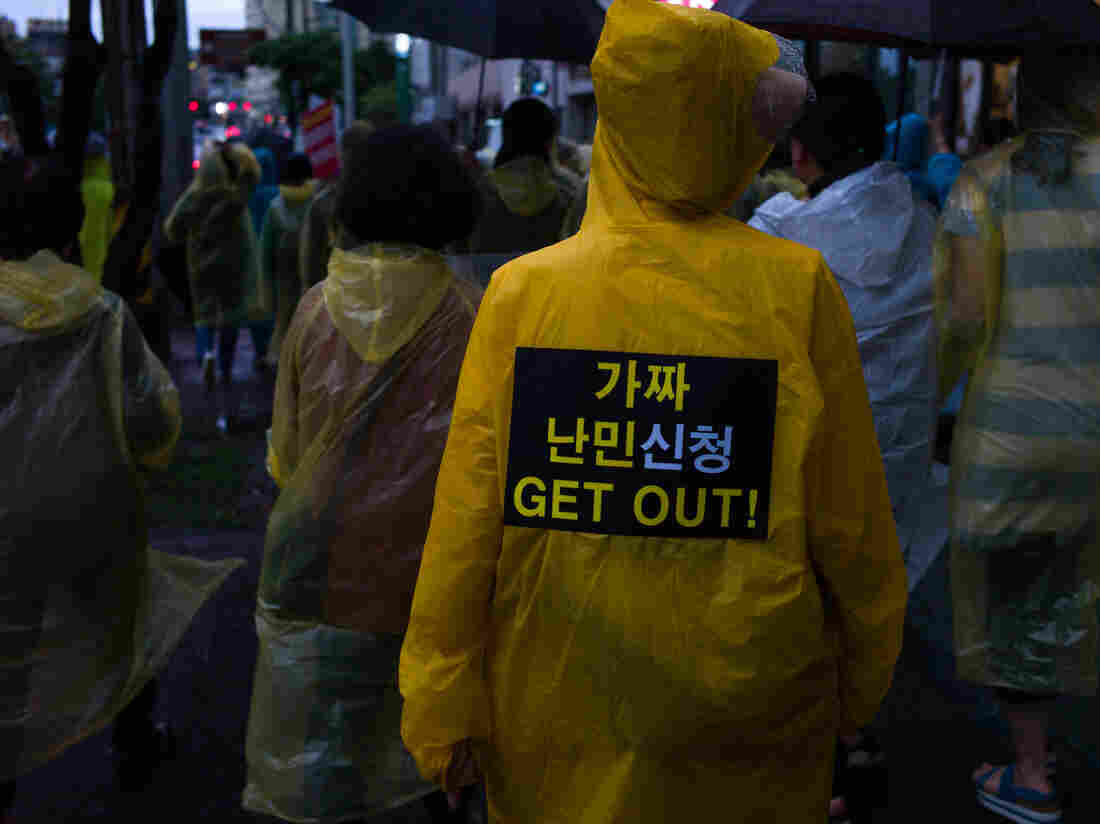 Residents of Jeju island take part in one of the country's protests against acceptance of Yemeni refugees. A larger protest took place last weekend in Seoul. NurPhoto/NurPhoto via Getty Images hide caption 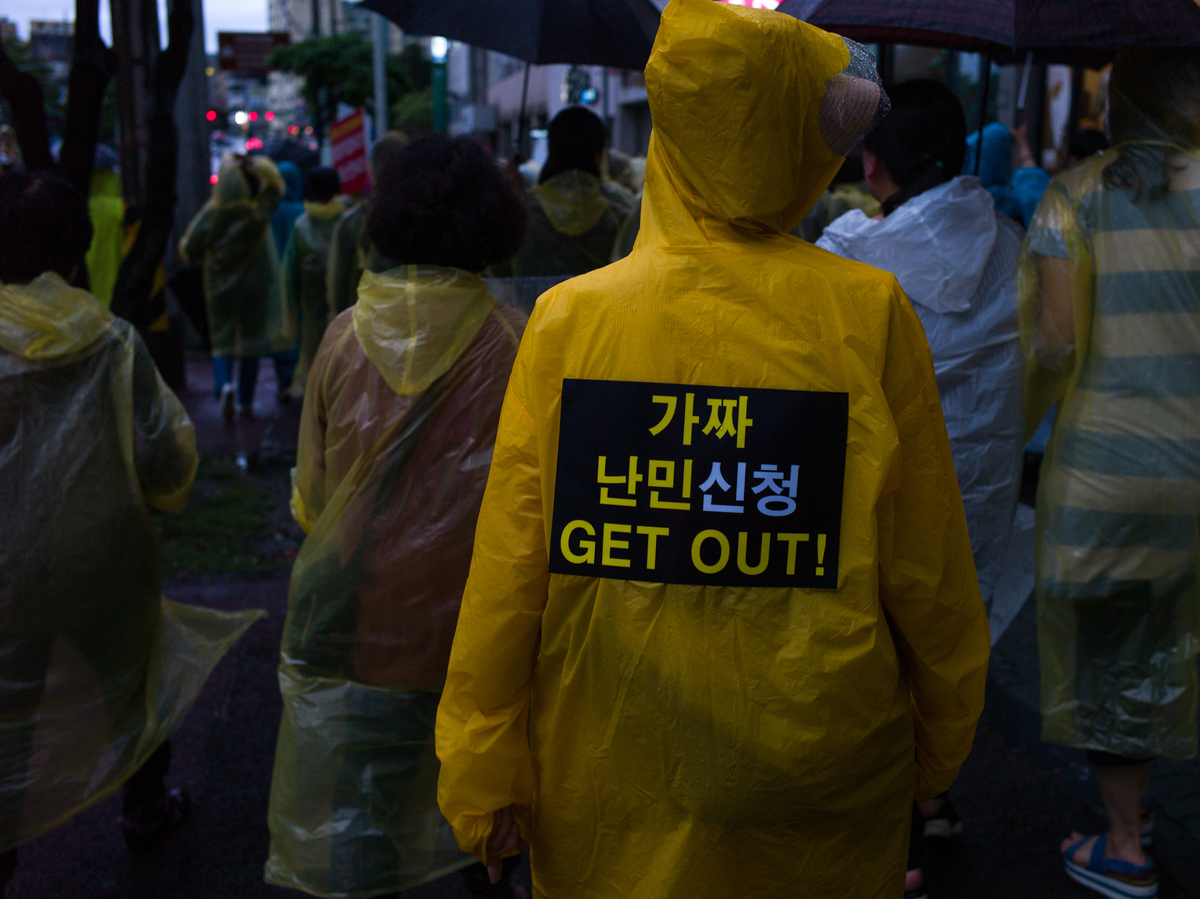 Residents of Jeju island take part in one of the country's protests against acceptance of Yemeni refugees. A larger protest took place last weekend in Seoul.

South Korea is not alone in its reaction to refugees, Yoon notes.

"Yes," she says, "there is a lot of pushback, and yes, there is a lot of pressure from civil society, but xenophobia is not the whole picture. There is a backlash over accepting refugees all over the world. And Korea is one of those countries."

On Jeju, some Korean employers, like fishing boat owner Lee Si-hyun, take a "why not" attitude to giving Yemenis work.

"If they're willing to head out to sea, I'll keep employing them," he says.

"I want to give them the message that we are ordinary people. We want to live in peace. We want to [live] in safe[ty]. We don't want to cause any problems for anybody," he says.

His future, and that of more than 500 others, is now in the hands of the Korean government. South Korea's asylum decisions are expected within six months.

"The unknown. The limbo," Al-wahaishi says. "That's what's scared us the most."