Accessibility links
'How To Be Famous' Says: Don't Hide Your Love Away Caitlin Moran's new novel, the second installment in the adventures of teen rock critic Dolly Wilde, is a dirty, jolly, book-length defense of teenage enthusiasm — for music, sex and life in general.

'How To Be Famous' Says: Don't Hide Your Love Away

'How To Be Famous' Says: Don't Hide Your Love Away 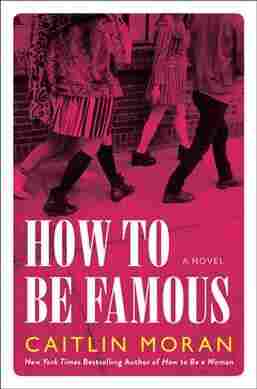 How to Be Famous

Title
How to Be Famous
Author
Caitlin Moran

Editor's note: This piece contains some graphic language about sex.

Last year, the singer Harry Styles, formerly of the boy band One Direction, gave an interview to Rolling Stone about the launch of his solo career. The journalist asked him whether he was worried about proving his "credibility" as a solo artist to "an older crowd" — as in, people who are not teenage girls.

And then something unexpected happened. Styles quickly and cleanly broke down the premise of the question: "Who's to say that young girls who like pop music — short for popular, right? — have worse musical taste than a 30-year-old hipster guy? That's not up to you to say," he admonished the interviewer — who happened to be Cameron Crowe, director of Almost Famous.

"Young girls like the Beatles," he continued. "You gonna tell me they're not serious? How can you say young girls don't get it? They're our future. Our future doctors, lawyers, mothers, presidents, they kind of keep the world going. Teenage-girl fans — they don't lie. If they like you, they're there. They don't act 'too cool.' They like you, and they tell you. Which is sick."

Caitlin Moran's How To Be Famous is the spiritual twin to that interview, a dirty, jolly, book-length defense of teenage enthusiasm. The second of a planned trilogy, it follows teen music journalist Johanna Morrigan (pen name Dolly Wilde) as she defends girls and their tastes from the practised disdain of her coworkers and friends in the "blokey, coke-y" music world of '90s London.

Exclusive First Read: Caitlin Moran's 'How To Build A Girl'

While Johanna is out drinking, writing, and negotiating the boundaries of taste and gender, she is also figuring something else out: sex. Both of these novels have more heart than head, and more vagina than either. The prequel to this novel, How To Build A Girl, showed Joanna discovering sex for the first time in a wonderfully naive and funny passage: "Here's the amazing thing about sex. You get a whole person to yourself, for the first time since you were a baby. Someone who is looking at you — just you — and thinking about you, and wanting you, and you haven't even had to lie at the bottom of the stairs and pretend you're dead to get them to do it."

But not all sex is like that, as Johanna realizes when she meets Jerry Sharpe, a comedian whose game is picking up young girls new to London and exploiting their inexperience.

Moran reminds us that playing it cool is a waste of living.

"You can't get into London without having to push through his c***, like a turnstile," Johanna's friend Suzanne explains. After one bad encounter — he tries to get her to give him a blow job while they watch his TV show — she makes the mistake of going back for more. He videotapes it, and before she knows it, all of London has seen her most miserable sexual encounter.

Our values about sex seem to have shifted overnight, which means that what might have felt radical a few years ago feels obvious now. Then again, values are not evenly distributed — and if some readers already have what this book is selling, others, particularly young people, might not. It's a book for someone who has yet to find out that taste is relative, cynicism is cheap, and you should only date people who are kind to you.

Despite its treatment of sexual exploitation, How To Be Famous is not dark — it is a joyous, yelping novel about learning to love things without apology or irony. In service to this, metaphors careen all over the book like untrained animals, shedding and slobbering on the carpets. Nuance is lost, repetition is constant, and Moran must always have the last word, even when she's the only one talking. But in a contest between craft and feeling, if I can't have both, I'd take feeling every time. Moran reminds us that playing it cool is a waste of living.