Accessibility links
Trump Administration Renews Temporary Protected Status For Some Yemenis The move, which gives another 18 months of protection from deportation, comes after the Department of Homeland Security declined to do so for nationals from several other countries in the past year. 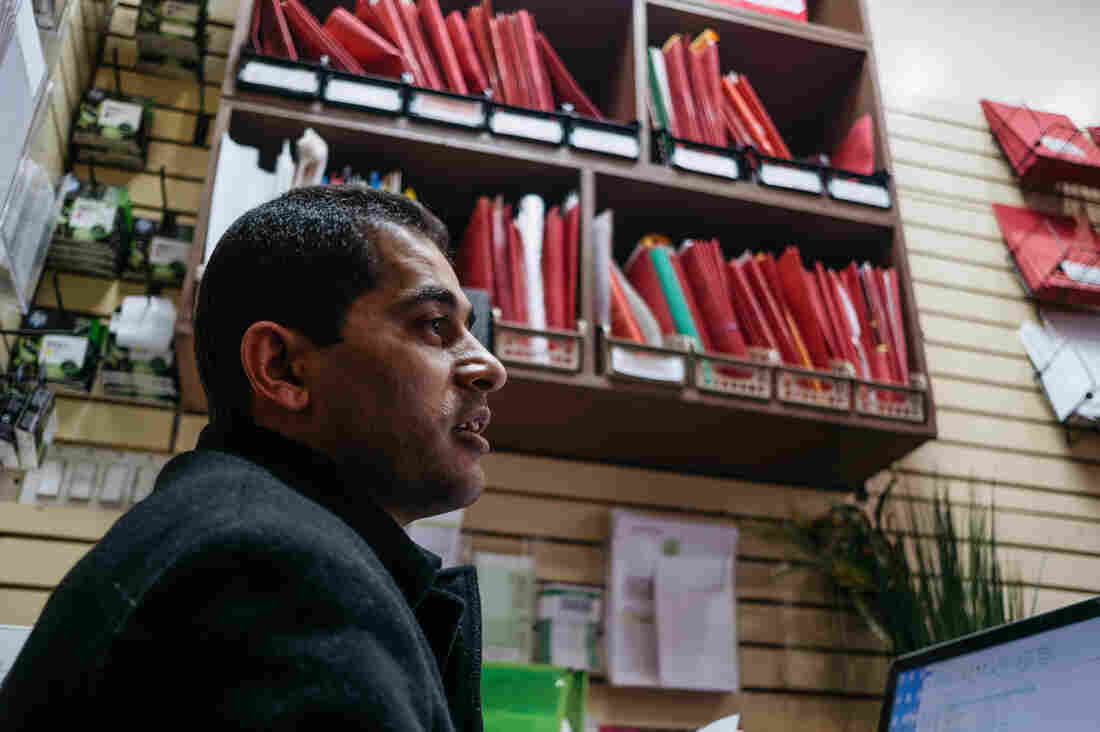 Folders full of immigration paperwork line the shelves of Faisal Alhashadi's office in New York City. An immigration specialist who works in the Bronx, Alhashadi has been advocating on behalf of Yemeni nationals visiting and living in the U.S. Melissa Bunni Elian for NPR hide caption Folders full of immigration paperwork line the shelves of Faisal Alhashadi's office in New York City. An immigration specialist who works in the Bronx, Alhashadi has been advocating on behalf of Yemeni nationals visiting and living in the U.S.

For Yemeni nationals currently living in the U.S., Thursday has brought a measure of solace: The Trump administration said it will be renewing the program that for years has shielded them from deportation if they meet certain conditions.

The designation known as temporary protected status, or TPS, has applied to people from Yemen since September 2015, when it was instituted "due to ongoing armed conflict in the country." Currently, the program covers about 1,250 Yemenis who pay hundreds of dollars to re-up their permits every 18 months.

Now, after the Department of Homeland Security announced another 18-month extension, those already covered by the program can re-register for protection at least through March 2020.

"After carefully reviewing conditions in Yemen with interagency partners, Secretary [Kirstjen] Nielsen determined that the ongoing armed conflict and extraordinary and temporary conditions that support Yemen's current designation for TPS continue to exist," the department said in a statement published Thursday.

Those conditions — including intense internecine violence, a failing food supply and several public health emergencies born of its badly devastated infrastructure — have conspired to create what multiple international aid organizations have described as "the largest humanitarian crisis in the world."

More than half the country's population lack reliable access to food, and more than eight million Yemenis are at risk of starvation.

"The conflict has escalated," Barbara Bodine, former ambassador to Yemen during the Clinton and Bush administrations, tells NPR's Joel Rose. "So this is not a situation where it's turning the corner in a positive way. It has gone off the cliff in a bad way."

Others who arrived in the U.S. after that point are not covered under Thursday's announcement. That means an estimated 400 Yemeni citizens now face the possibility of forced removal from the U.S., according to the International Rescue Committee.

What Hondurans In The U.S. Can Expect When They're Deported

"To risk sending Yemenis back to an active war zone where the majority of the population lacks adequate food, clean water and basic health services would put innocent lives in immediate danger," the aid group's Yemen country director, Frank McManus, said Thursday in a statement protesting the exclusion of new arrivals.

"Deliberately subjecting more innocent lives to endure the conditions they would face in Yemen is unjustifiable and Un-American."

The decision falls in line with the conclusion the department reached earlier this year with regard to TPS status for Syria, another country long riven by violence. The Trump administration declined to cover the roughly 2,000 Syrian visa holders who arrived since 2012.

Both countries are also included in President Trump's travel ban, which bars nearly all travelers from several majority-Muslim nations plus North Korea and Venezuela. The Supreme Court just upheld that ban as constitutional last month.

Still, other countries long covered by TPS did not get the same renewal as Yemen and Syria. Within the past year, the Trump administration has declined to extend protections for nearly 60,000 Hondurans, roughly 46,000 Haitians and some 200,000 natives of El Salvador.