Accessibility links
Thai Diver Dies During Cave Rescue Operations A former member of an elite Thai navy unit died while returning from placing oxygen canisters in the cave where 12 boys and their coach have been trapped. 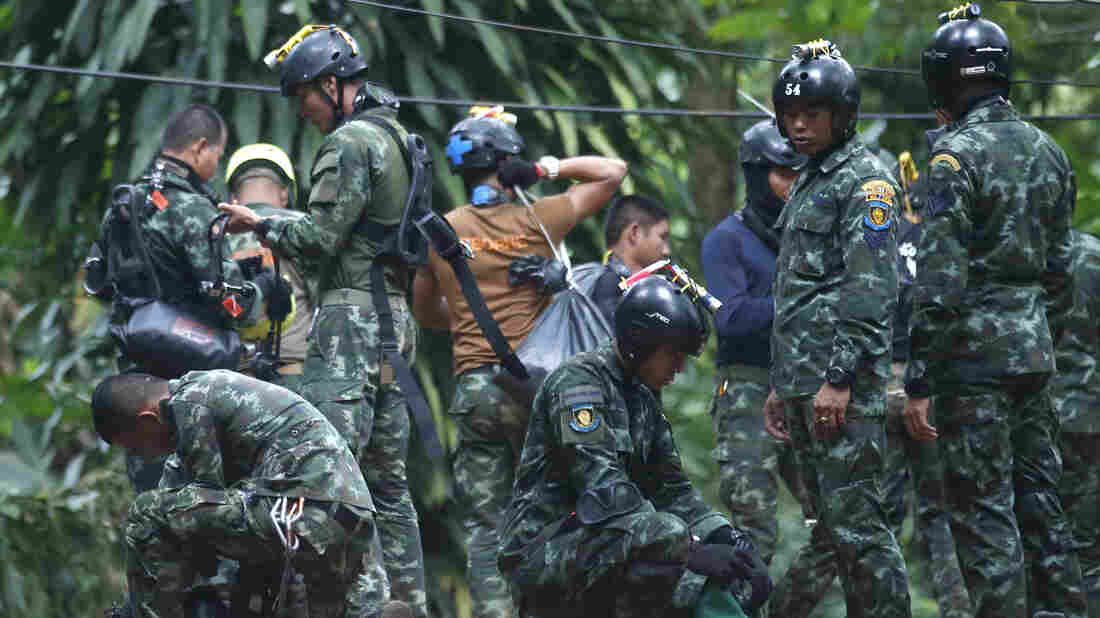 Thai rescue crews prepare Friday to enter the cave where 12 boys and their soccer coach have been trapped in Chiang Rai province, in northern Thailand. A Thai diver died while on a supply mission. Sakchai Lalit/AP hide caption 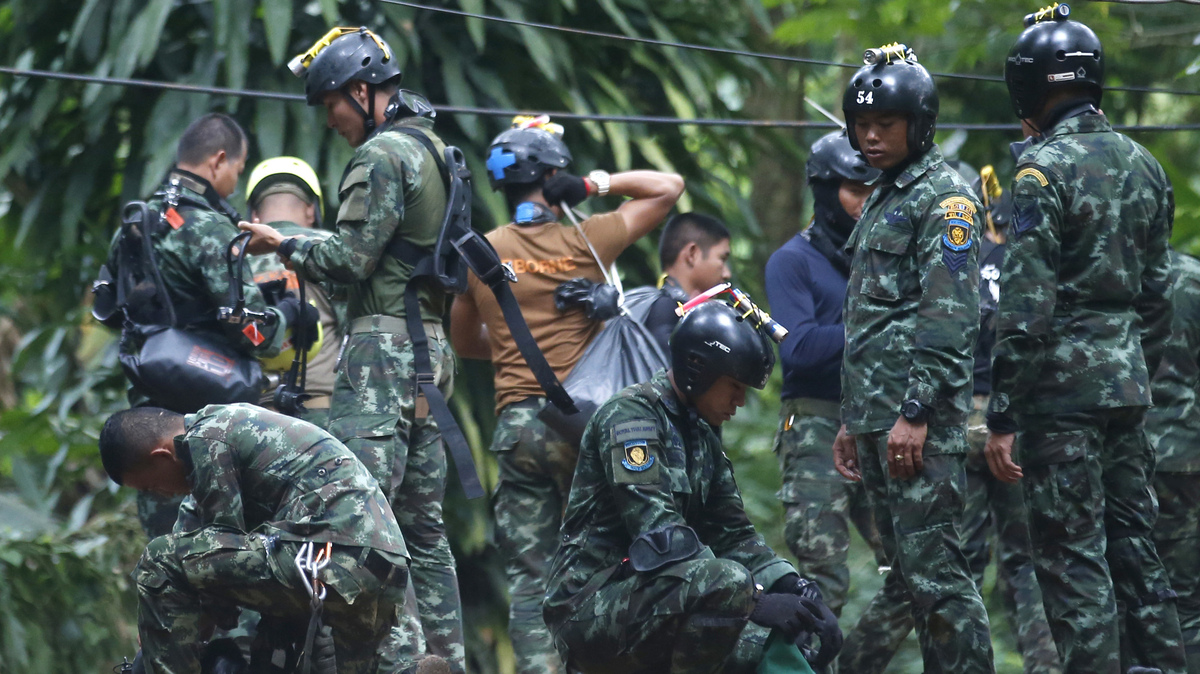 Thai rescue crews prepare Friday to enter the cave where 12 boys and their soccer coach have been trapped in Chiang Rai province, in northern Thailand. A Thai diver died while on a supply mission.

A former diver with an elite Thai navy unit has died while taking part in operations to rescue 12 boys and their soccer coach who have been trapped in a flooded cave in Thailand.

The boys have been trapped in a complex cave system in Chiang Rai in northern Thailand since June 23.

The elite diver's death underscores the difficulty and complexity of attempting to rescue the 12 boys, ages 11-16, and their 25-year-old coach. Many of the boys reportedly do not know how to swim and do not have experience using scuba equipment. The journey from outside to where the boys are stuck takes about six hours, according to The New York Times.

Arpakorn also told reporters Friday that time to rescue the boys is now "limited," though he did not specify the reasons.

"At first we thought that we could sustain the kids' lives for a long time where they are now, but now, many things have changed," he said, according to The Associated Press. "We have a limited amount of time."

Authorities had earlier considered waiting months until the rainy season ends to rescue the boys.

Rescuers are reportedly also concerned about a lack of oxygen in the cave. Maj. Gen. Chalongchai Chaiyakam told reporters the most important task is to set up an oxygen line to reach the boys, the AP reports.

Rescuers have been working to pump water out of the cave. But the Bangkok Post reports that monsoon rains are predicted for Sunday, "which authorities fear could re-fill the cave and reverse gains made in the mammoth rescue effort in recent days."

Arpakorn told reporters, "I can guarantee that we will not panic, we will not stop our mission, we will not let the sacrifice of our friend go to waste," according to the BBC.

The attempt to rescue the boys and their coach from the cave, in all of its complications, has also spurred shows of support from people around the world.

One of 33 Chilean miners who were trapped underground for 69 days in 2010 sent a message of hope. "I have no doubt that if the government of the country [of Thailand] puts in everything and makes all possible efforts, this rescue will be successful," Mario Sepulveda said in a video translated by ABC News.

FIFA President Gianni Infantino invited the boys to the World Cup final in Moscow — if they are rescued in time and feel healthy enough to travel. In Infantino's letter, which was addressed to the president of the Football Association of Thailand, FIFA offered "deepest sympathies and support" to the families of the soccer players and coach.

Elon Musk also offered his help in the rescue effort, tweeting that, "I suspect that the Thai govt has this under control, but I'm happy to help if there is a way to do so."

Engineers from Musk's companies SpaceX and The Boring Co. were traveling to Thailand on Saturday "to see if we can be helpful to govt," Musk added. "There are probably many complexities that are hard to appreciate without being there in person."