Accessibility links
Nawaz Sharif, Ousted Pakistani Leader, Sentenced To 10 Years For Corruption Sharif's daughter and son-in-law also got prison terms Friday over the scandal that doomed his premiership last year. It's unclear when the Sharifs, who are in London, would serve their penalties. 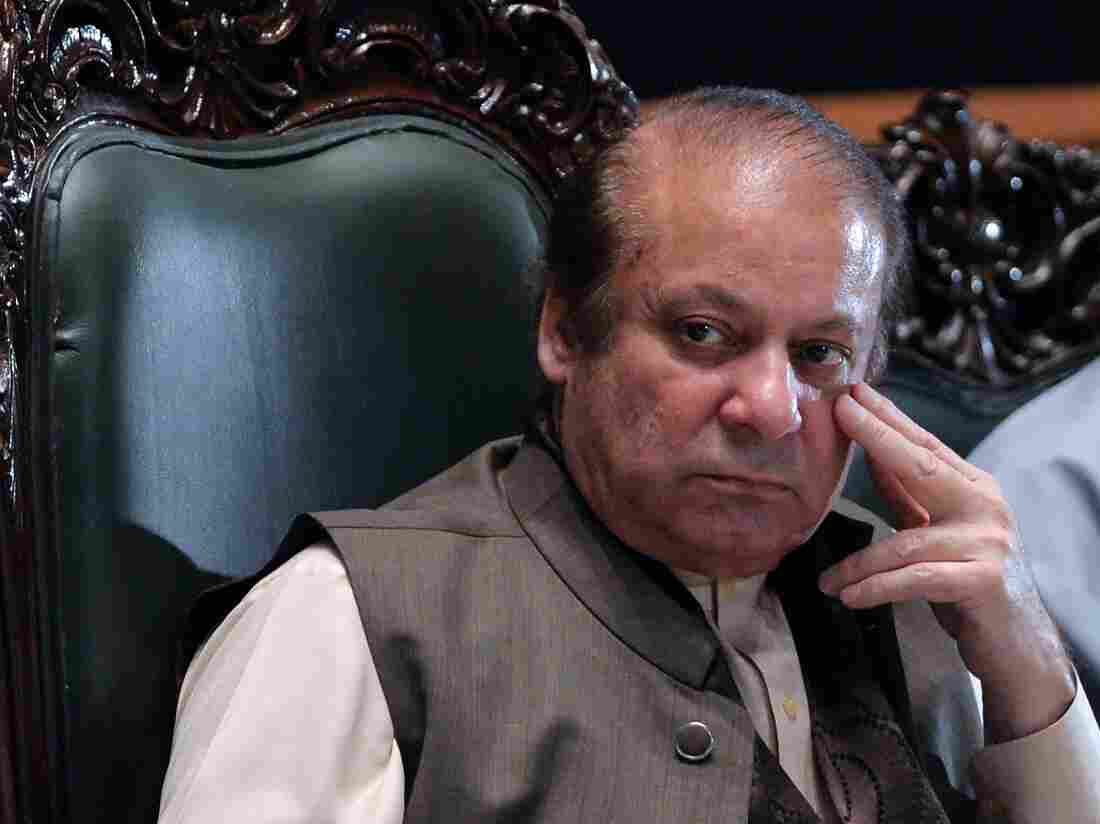 Ousted Pakistani Prime Minister Nawaz Sharif, his daughter and his son-in-law all received prison sentences Friday for their roles in the massive corruption scandal that brought down his premiership. Aamir Qureshi/AFP/Getty Images hide caption 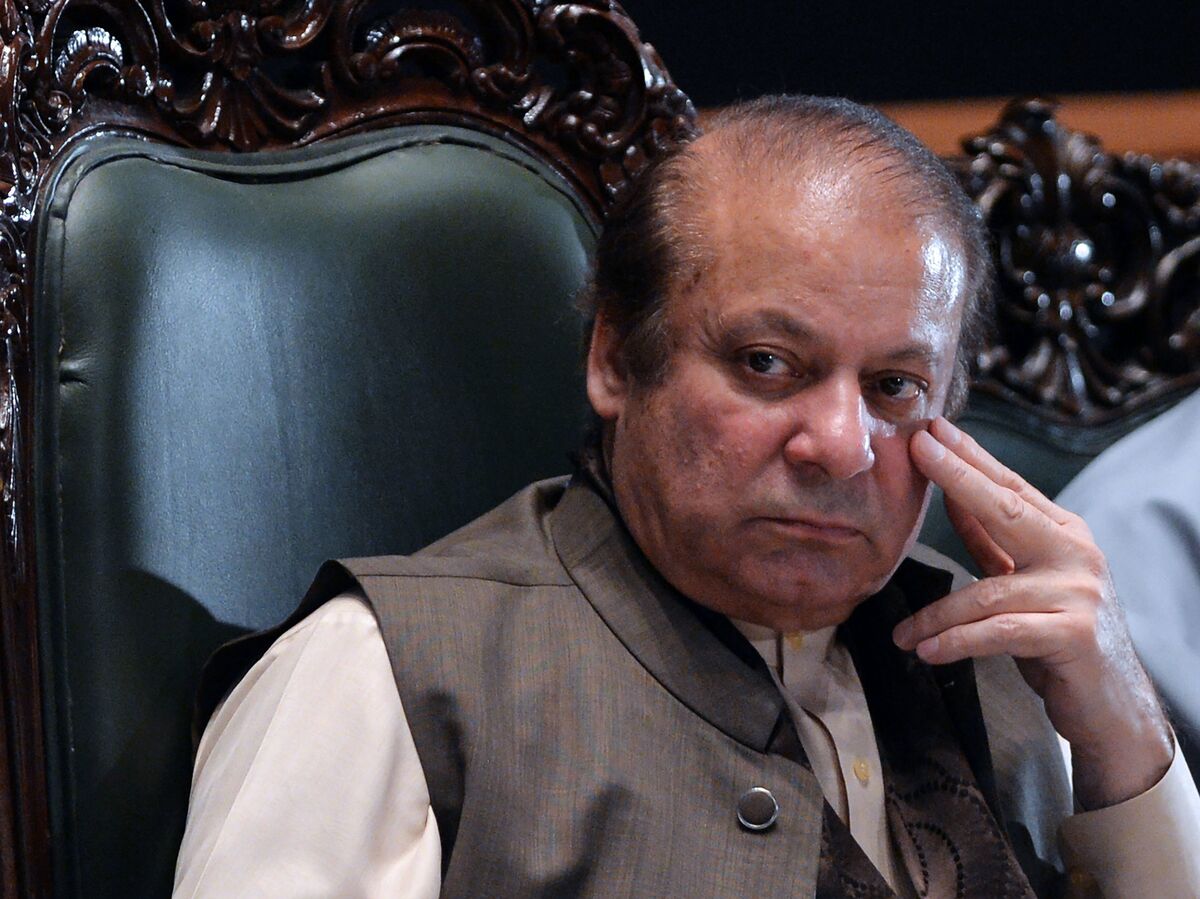 Ousted Pakistani Prime Minister Nawaz Sharif, his daughter and his son-in-law all received prison sentences Friday for their roles in the massive corruption scandal that brought down his premiership.

Former Pakistani Prime Minister Nawaz Sharif has been sentenced to 10 years in prison for his role in the massive corruption scandal that caused his ouster last year. The country's National Accountability Bureau handed down the verdict Friday, pairing it with a seven-year sentence for his daughter Maryam, whom many consider his political heir.

The sentences mark a grim milestone for Sharif, who has seen his political fortunes fall with stunning speed in the past year. At this time last year, he was still serving his third term as Pakistan's premier — but revelations about his financial dealings, uncovered as part of the massive Panama Papers leaks, loosened his grip on power.

After it came to light that the Sharif family had purchased several lavish apartments in London through offshore companies, Pakistan's Supreme Court found that the disgraced prime minister had failed to properly disclose his financial assets — several of which were "disproportionate to his means of income" — and disqualified him from office.

Since then, matters have only gone further south for Sharif, whom authorities have sought to arrest and have banned for life from public office.

Now, after a nine-month trial concluded Friday, prison time awaits Sharif and his daughter, who was convicted of abetting his activities. Maryam's husband, retired army Capt. Safdar Awan, got a one-year sentence for failing to cooperate with the National Accountability Bureau.

It's unclear when the Sharifs would serve their respective penalties, however. They watched the verdict from London, where Nawaz Sharif's wife, Kulsoom, is receiving treatment for cancer.

"The UK has no formal extradition treaty with Pakistan," the BBC notes, "but Section 194 of the Extradition Act 2003 allows special extradition arrangements in exceptional circumstances."

The Sharif family has shown no indication they intend to accept the sentences. They have previously said they would appeal any convictions.

Throughout the case, they and their political supporters have cast the allegations as part of a campaign to discredit the former premier — allegedly led by Pakistan's army, which has made little secret of its dislike for Sharif. The longtime politician's first two terms in power ended abruptly under military pressure, the second time by outright coup.

"This decision was in fact written and dictated by armed forces," Mohamed Sidique Awan, an attorney and Sharif supporter, claimed when speaking with NPR's Diaa Hadid.

Awan and others say the military is attempting to stifle Sharif and his party before the country's general elections, which are scheduled for the end of the month.

Responding to news of the sentences, Nawaz Sharif's brother didn't mention the military — but spared little criticism in his take on the verdict.

"History will remember this verdict in black words. The decision is flawed, politically motivated & has glaring loopholes," Shehbaz Sharif said in a series of tweets.

Pakistan Muslim League (Nawaz) strongly rejects the verdict of the Accountability Court in the Avenfield case. History will remember this verdict in black words. The decision is flawed, politically motivated & has glaring loopholes.

Maryam Sharif, too, took to Twitter to vent her outrage at the sentences she and her father received: "This is a very small punishment for firmly standing in front of unseen forces," she said, according to a translation by Pakistan's Dawn news agency. "The morale to fight against oppression has increased today."

Shehbaz Sharif vowed that he will go to every "nook and corner of the country to make the masses aware of the miscarriage of justice" — and that another verdict, this time in the "court of the people," is set to be rendered in the July 25 elections.

"The masses will use the power of vote," he said, "and their evidence will be irrefutable."