Accessibility links
Many Look To Buddhism For Sanctuary From An Over-Connected World Some users are turning to Buddhism and other religions to have a more mindful experience online. By being tethered to your devices, one monk says, "you will waste your whole precious time." 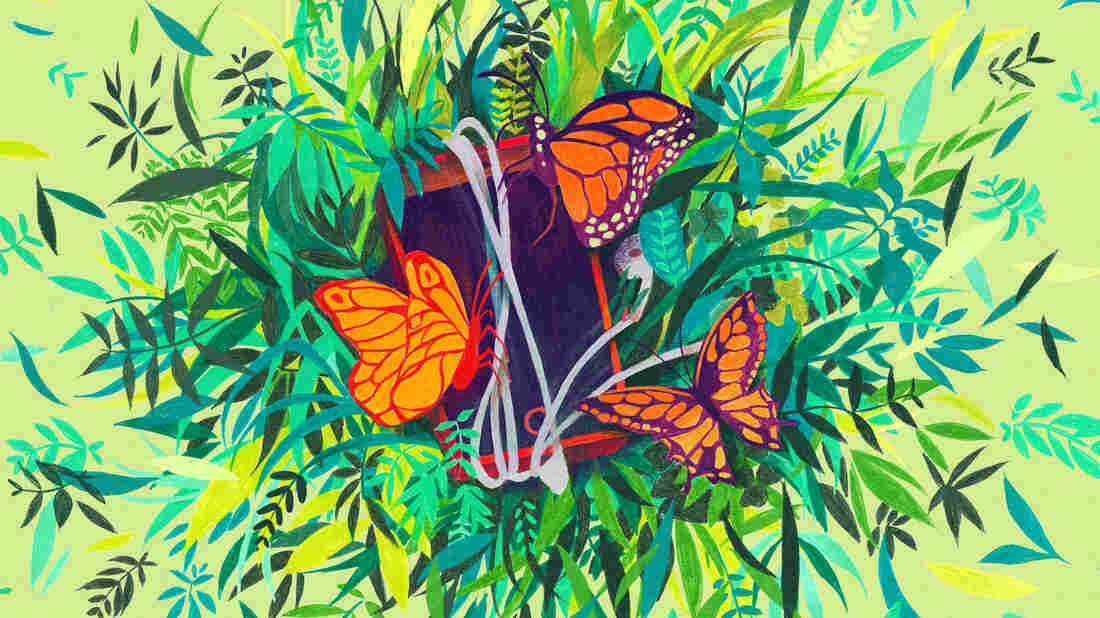 One recent study estimated that Americans are spending nearly six hours a day on their connected devices. Add television to that and the total rises to nearly 10 hours. Deborah Lee/NPR hide caption 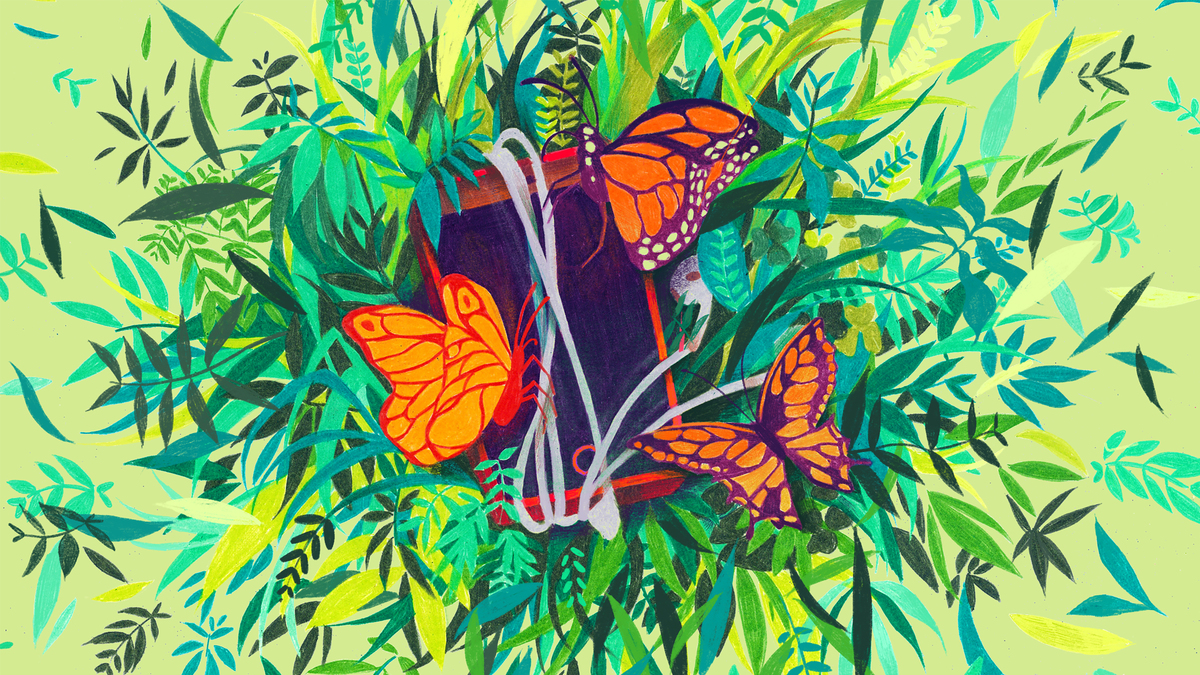 One recent study estimated that Americans are spending nearly six hours a day on their connected devices. Add television to that and the total rises to nearly 10 hours.

On the floor of a Zen Buddhist worship space in an apartment building in Washington, D.C., about 15 people recently sat on meditation cushions. They chant sutras and meditate, in complete silence, for a full 30 minutes.

And then one of the lay leaders of the All Beings Zen Sangha, or congregation, conducted a "little exercise."

"It's very simple," said Mark Stone. "If you could take out your screens, stay on them for 12 minutes, doing what you usually do."

The "Zen Practice and Screen Use" workshop is one of a series that have been held at this zendo, or meditation hall, with the aim of helping participants have a more mindful experience online.

It's a response to growing concern over the amount of time people devote to their screens. One recent study estimated that Americans are spending nearly six hours a day on their connected devices. Add television to that and the total rises to nearly 10 hours.

Some countries are treating Internet addiction as a public health crisis. In the U.S., tech companies are under pressure to respond, and many are developing code and apps to help limit screen use.

But Stone, a retired economist, favors an approach based on Buddhist principles such as mindfulness and intentionality. He told the members of his Zen sangha that when they're online, they should be aware of their posture and take deep breaths.

He also recommends setting aside devices for meals and longer digital fasts, and making frequent use of airplane and "do not disturb" modes.

What's been really helpful for him, he said, "is, when I pick up my screen [to] think about my intention, why am I doing this."

During the workshop exercise, participants stayed seated in the meditation pose while sending texts on their phones or checking in on social media. One typed away on a computer with a sticker on the back of the screen that says: "Question everything."

After the screen time, and more meditation, Stone asked the congregation to reflect on the experience.

"I did notice afterwards," said one participant, Carlos Moura, "that I was focused, but I really wasn't aware of you all."

You will waste your whole precious time.

"I just physically noticed that my head really hurt, after looking at the screen and sitting, which I hadn't really noticed the first time we were sitting," offered another, Leslie Cohen.

Cohen, a tourist visiting from San Diego, Calif., said she came to this zendo for a chance to turn off. 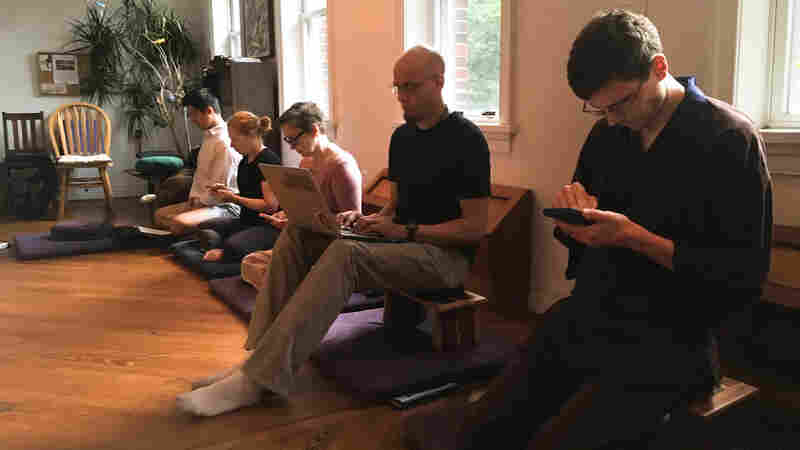 Participants check in on social media and send texts on their phones during a screen mindfulness workshop at the All Beings Zen congregation in Washington, D.C. Jerome Socolovsky/NPR hide caption 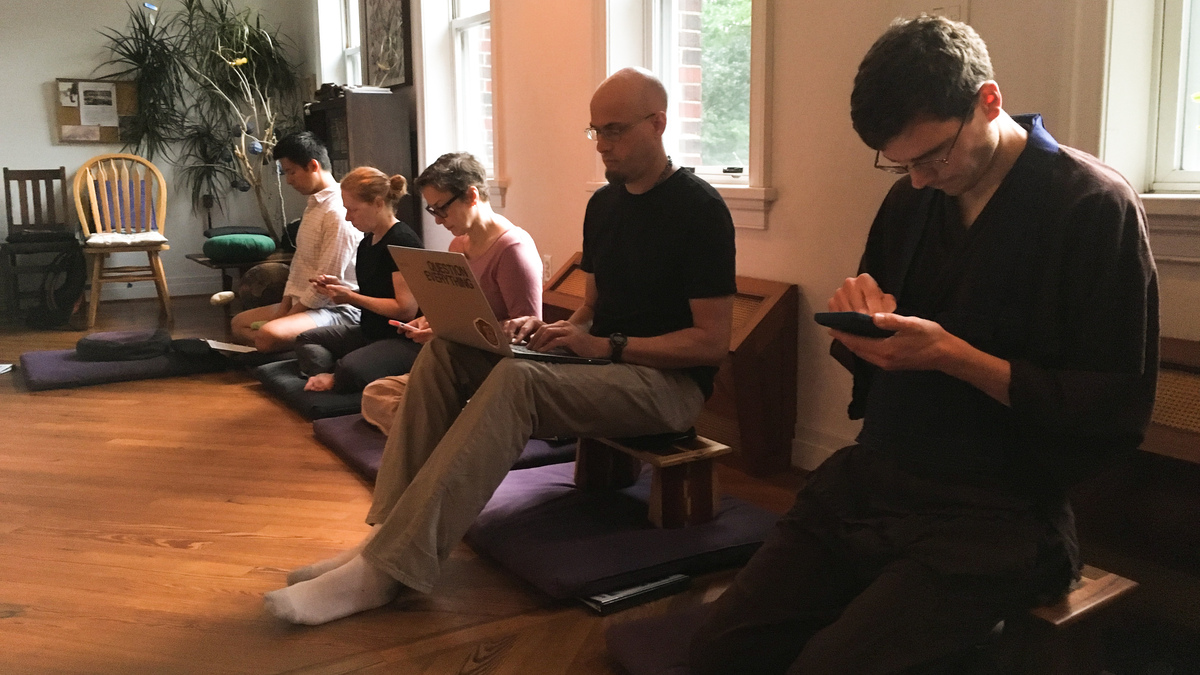 Participants check in on social media and send texts on their phones during a screen mindfulness workshop at the All Beings Zen congregation in Washington, D.C.

"We were in Ocean City, and the TV was on, the kids were on their screens, and I had a moment of, like, I've got to find a place to meditate as soon as I get to Washington, D.C.!"

Buddhism is not the only faith that offers a sanctuary from the connected world. Churches, synagogues, mosques and temples are finding that many adherents value their unplugged worship spaces and activities.

In fact, blogger and author Andrew Sullivan, in a 2016 piece in New York magazine about meditation and "distraction sickness," argued that this should be religion's new role, with the potential of reversing the trends of disaffiliation and declining attendance afflicting many traditional congregations.

"If the churches came to understand that the greatest threat to faith today is not hedonism but distraction, perhaps they might begin to appeal anew to a frazzled digital generation," he wrote.

At the Washington Buddhist Vihara, a monastic residence for monks in the Theravada tradition of the faith, chief monk Bhante Dhammasiri says living in the U.S. for 32 years has been long enough to watch a society become hooked on screens.

"What we see today, is they don't live the life. They forget to live the life, because they are addicted to cellphones — especially cellphones," he said.

Asked whether he has a smartphone, he smiles and says a devotee gave him one, and concedes he finds it useful for calling and as a calendar. And he likes the convenience of the built-in flashlight.

But he doesn't engage on Facebook or other social media because, he says: "You're never getting satisfied. You will waste your whole precious time."

Dhammasiri says the Buddha urged his followers to live a simple life, and rid themselves of luxury and attachments. Cellphones and other digital devices may promise happiness and fulfillment.

But, the monk says, it's just an illusion.