Accessibility links
First Boys Are Rescued From Cave In Thailand The Thai Navy SEALS say four of the 13 people who had been trapped for more than two weeks have been rescued. Rescue efforts began Sunday morning.

First Boys Are Rescued From Cave In Thailand

First Boys Are Rescued From Cave In Thailand 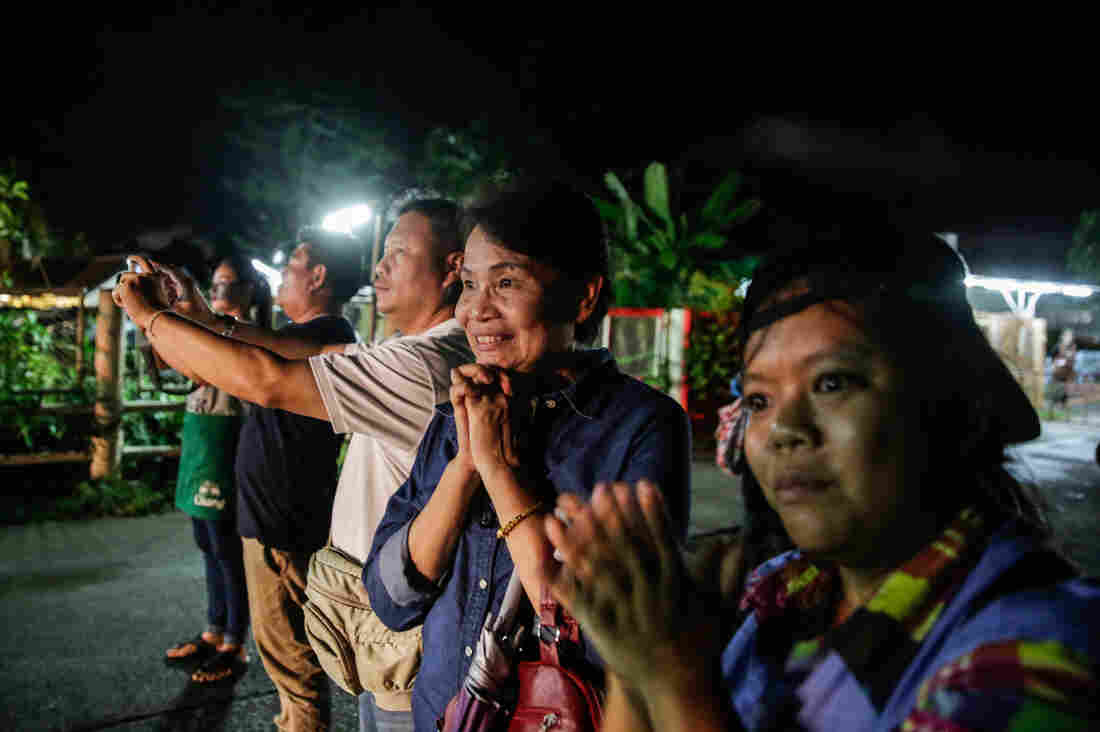 Onlookers watch and cheer as ambulances deliver boys rescued from a cave in northern Thailand to a hospital in Chiang Rai on Sunday. Lauren DeCicca/Getty Images hide caption 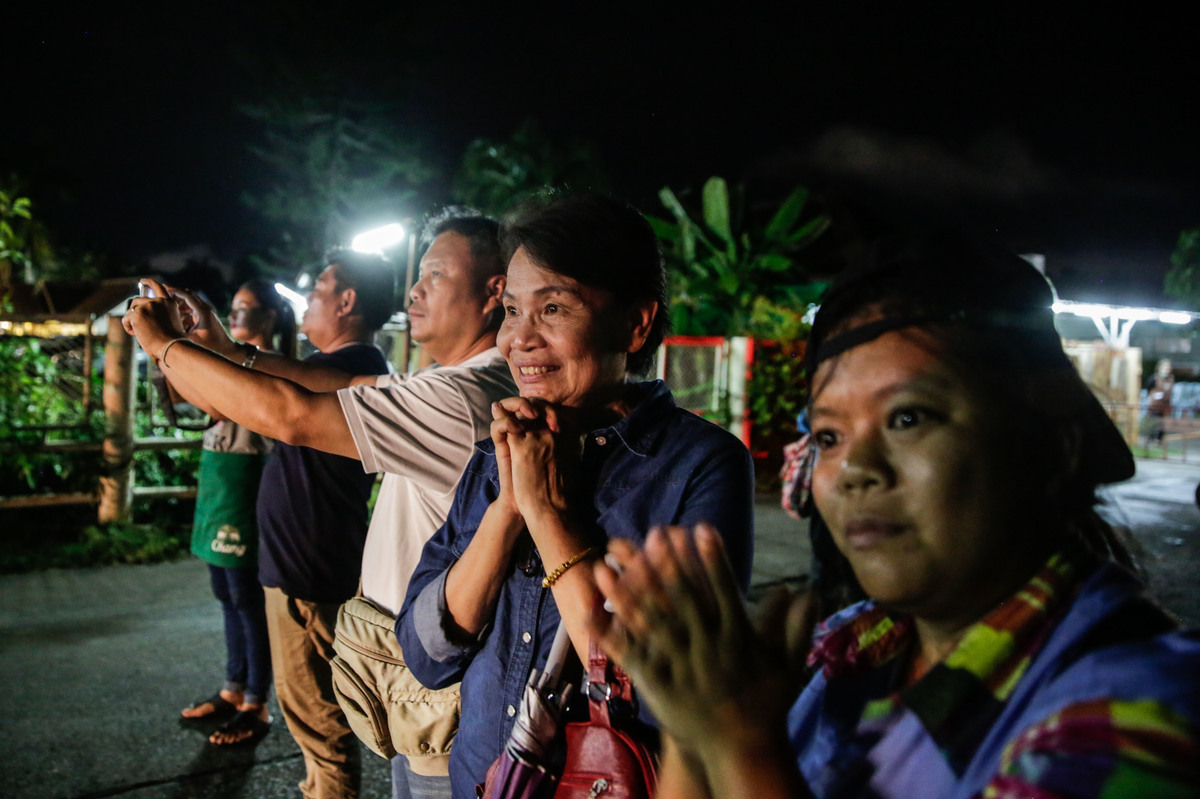 Onlookers watch and cheer as ambulances deliver boys rescued from a cave in northern Thailand to a hospital in Chiang Rai on Sunday.

Four members of the trapped soccer team have been rescued from the flooded cave in Thailand where they had been trapped for more than two weeks, according to Thai Navy SEALS.

It's part of an effort to evacuate the 12 boys from the team along with their coach, in a rescue that has captured the world's attention, with reporters flocking to the scene and foreign divers arriving to assist.

The complicated and perilous operation to rescue the group began Sunday morning at 10 a.m. local time, officials said. "Today is D-Day," Chiang Rai acting Gov. Narongsak Osattanakorn proclaimed as the rescue effort kicked off Sunday. He said it would take about 11 hours to remove the first boy from the cave and that two divers would accompany each boy.

Later Sunday, the effort appeared to be ahead of schedule.

The trapped team has been perched on a ledge more than a mile into the complex cave system. Since British divers found the group on Monday, rescue workers have been trying to help them gain strength for the journey and have treated their scrapes. 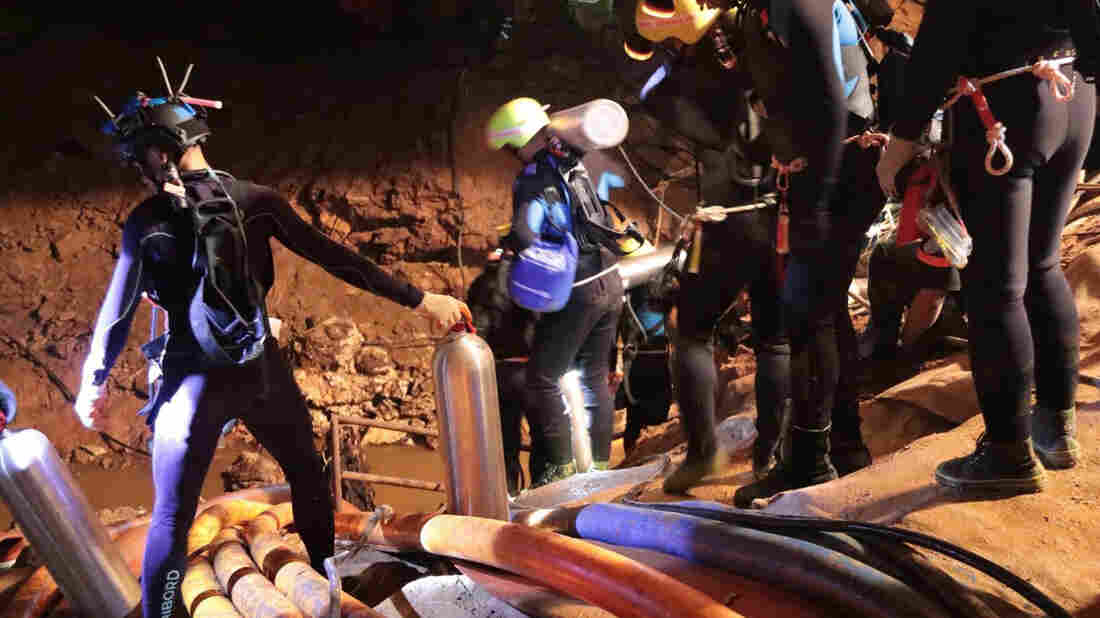 Thai rescue team members walk inside the cave where 12 boys and their soccer coach are trapped, in a photo released by Thai authorities on Saturday. Royal Thai Navy/AP hide caption 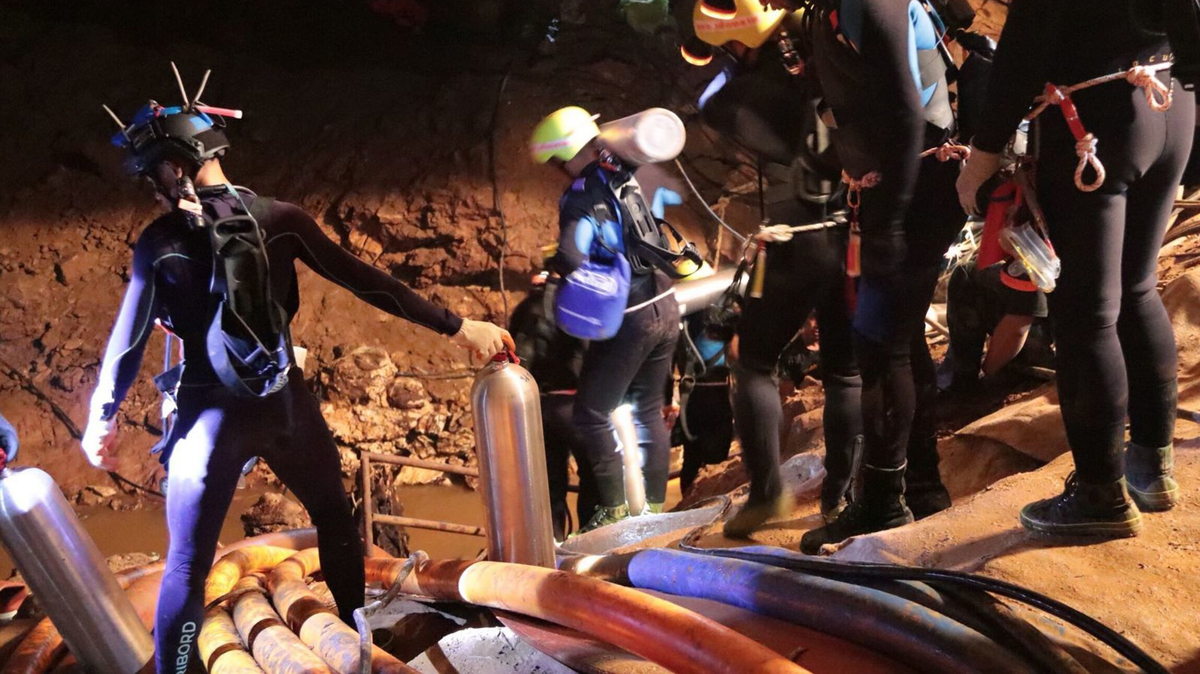 Thai rescue team members walk inside the cave where 12 boys and their soccer coach are trapped, in a photo released by Thai authorities on Saturday.

The rescued boys were taken to a nearby hospital, and it wasn't immediately clear what their condition is. According to The Associated Press, Narongsak told reporters that the healthiest were taken out first.

The journey from the entrance to the chamber where the boys and their coach are stuck takes about five or six hours each way.

The next phase of the operation is set to start in 10 to 20 hours, Narongsak told reporters. It's not clear precisely how long it will take in total, though Maj. Gen. Chalongchai Chaiyakam said the 13 "will continuously come out in approximately two to four days, which all may change depending on weather and water conditions," The Associated Press earlier reported.

The process is extremely risky, but officials say waters right now are at their optimal level inside the cave after a few days of better weather — and they're worried about the potential for more rains to fill the flooded caves even further.

"If we keep on waiting and the rains come in the next three or four days, our readiness will decrease," Narongsak said, according to the AP.

The governor has called the rescue a "war with water and time." 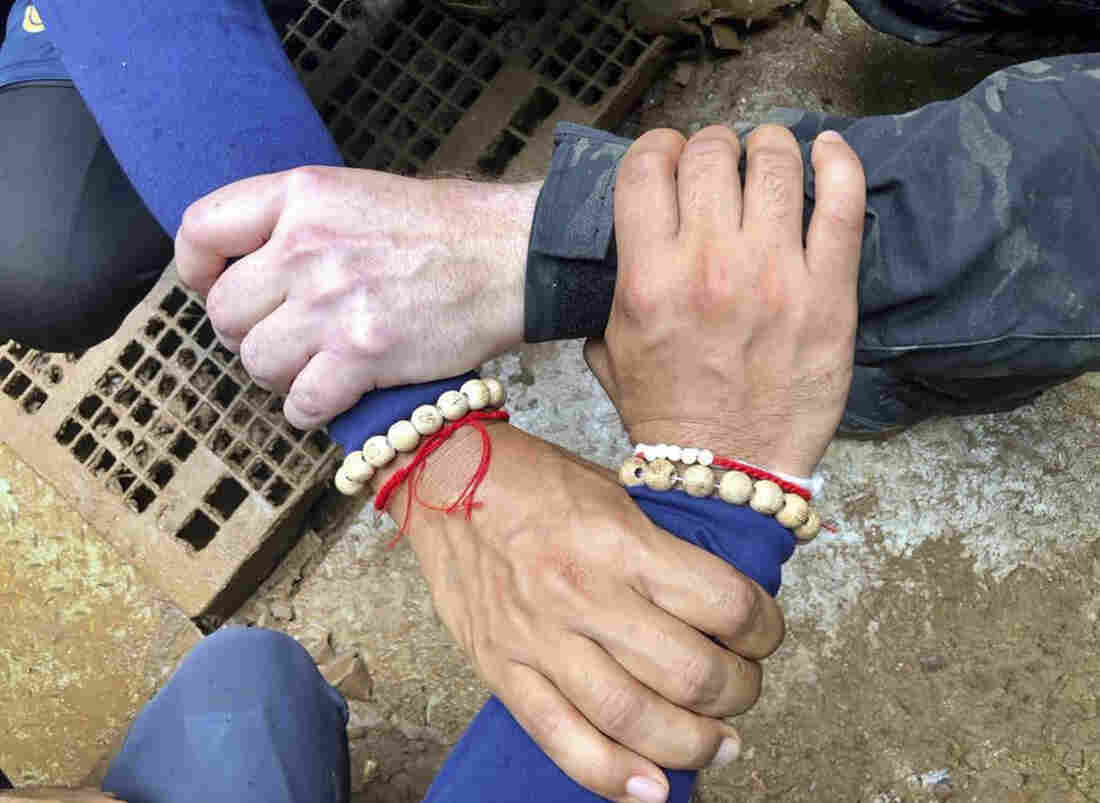 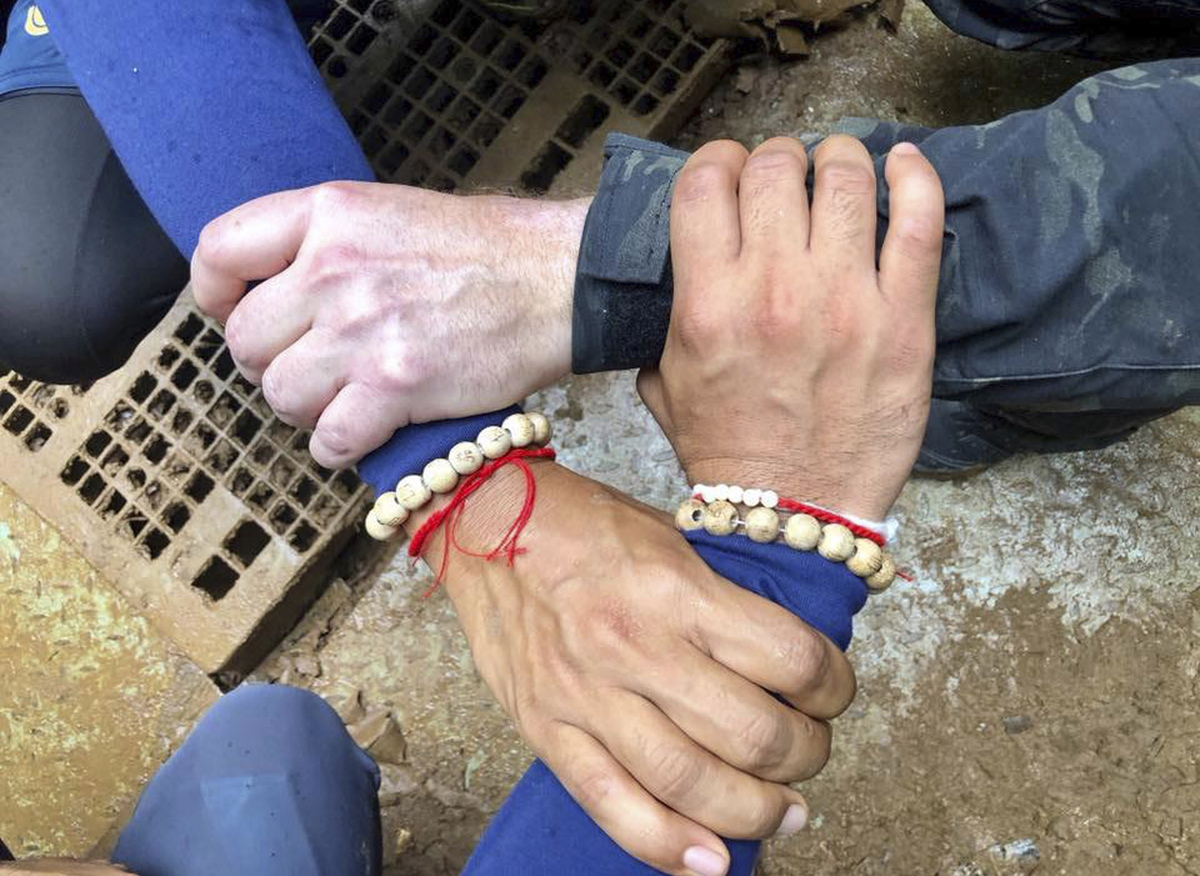 Many or all of the boys do not know how to swim and none have used scuba gear before, though expert divers who have been with them in the last several days have been reportedly giving the boys instructions on diving.

The boys, ages 11-16, and their 25-year-old coach have been trapped in the complex cave system since June 23 due to flooded passageways.

The hundreds of journalists that have been waiting outside the entrance to the cave were moved out on Sunday, and told to go to a different press center set up more than a mile and a half away, as the rescue enters full swing.

Rescuers had considered other options, like waiting months for the rainy season to end and the waters to recede. But that entails plenty of risks as well, as the water could go up before it goes down. Efforts to pump water out of the cave have been set back by rains.

Depleting oxygen levels in the cave have also been a cause for concern over the past week. Officials had made efforts to extend a hose to the chamber where the 13 have been holed up but have reportedly not been able to do so. The oxygen level in the cave was about 15 percent on Friday, The New York Times reported that a Thai navy commander said. Normal air contains about 21 percent oxygen.

The mood there now is one of apprehension and elation. In this complicated effort, a lot of things could go wrong. And with the boys in weakest condition yet to be rescued, the tense community waits and hopes.