Accessibility links
Ethiopia And Eritrea Have Been In Conflict For 20 Years. Today, Their Leaders Hugged As the Ethiopian prime minister walked off the plane in Eritrea, he smiled and gave a big hug to Eritrea's authoritarian ruler. It's a sign of a rapid thaw in the tensions between the two countries.

Ethiopia And Eritrea Have Been In Conflict For 20 Years. Today, Their Leaders Hugged

Ethiopia And Eritrea Have Been In Conflict For 20 Years. Today, Their Leaders Hugged 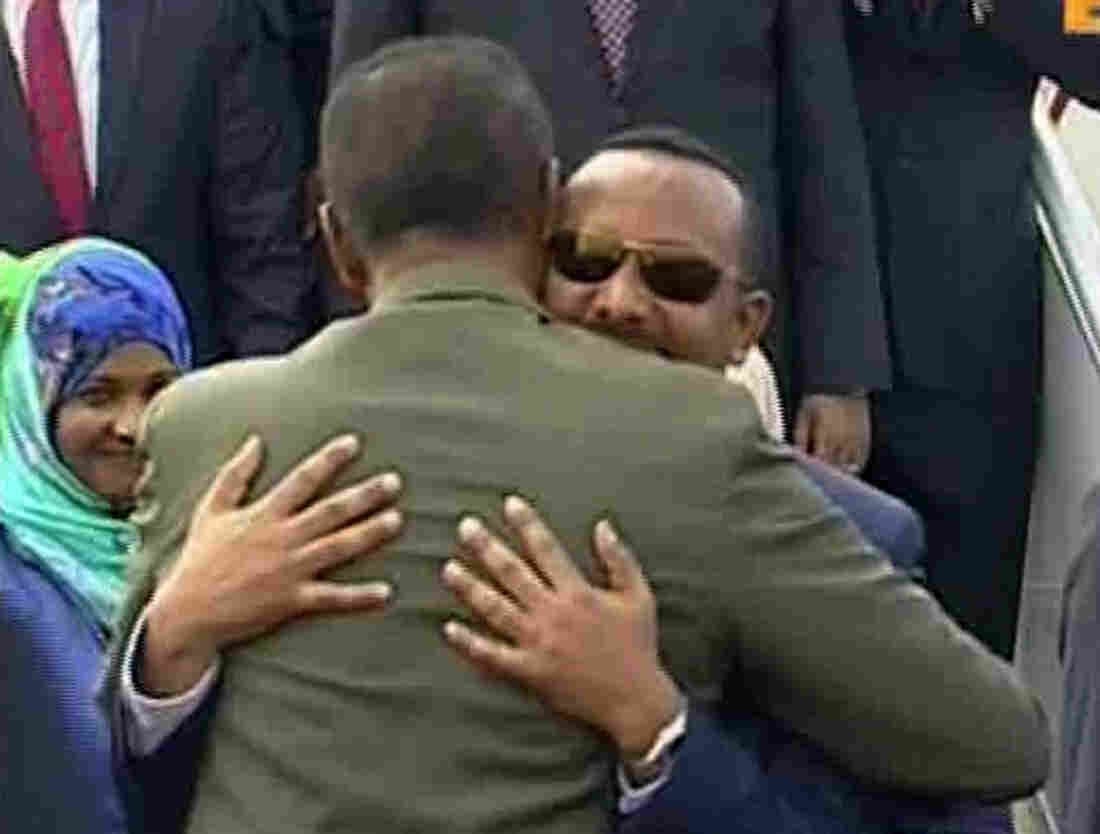 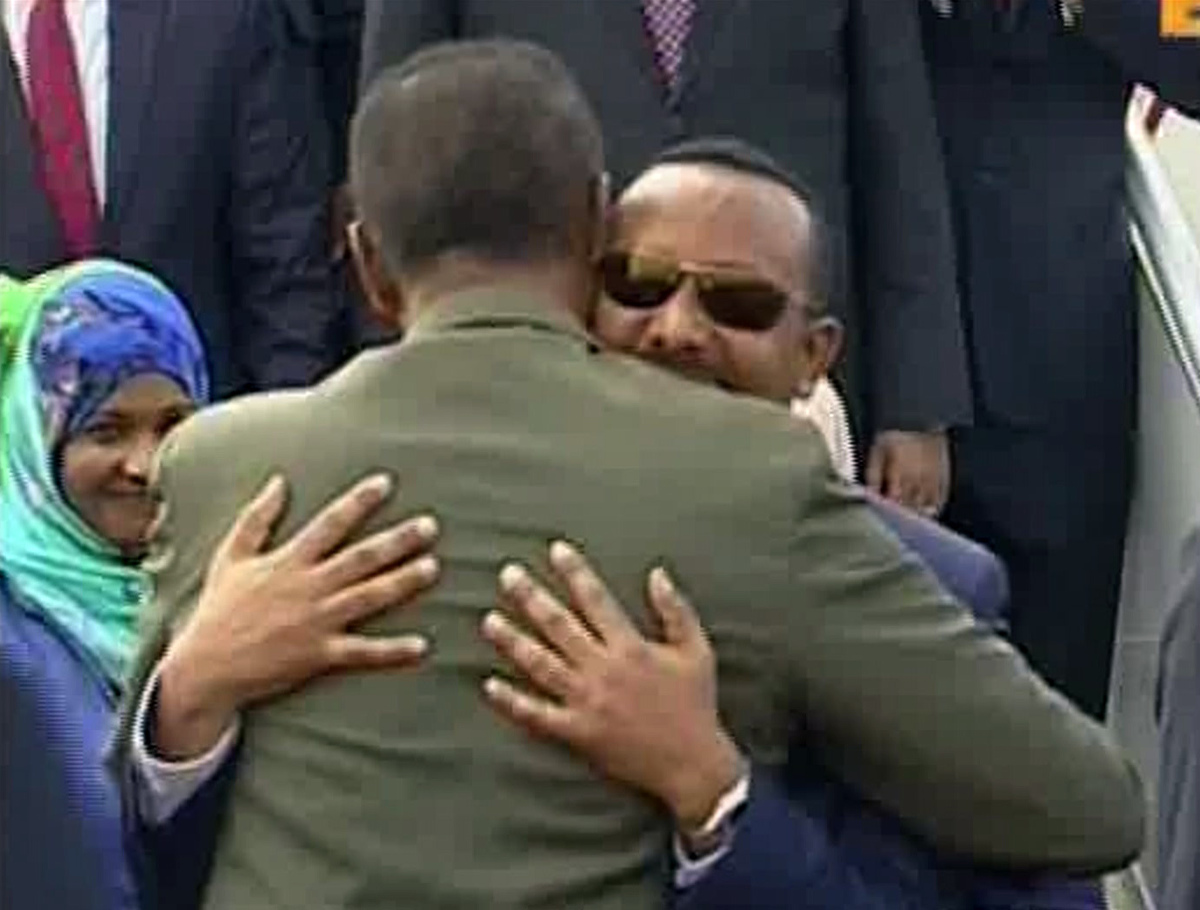 Ethiopian Prime Minister Abiy Ahmed, background, is welcomed by Eritrean President Isaias Afwerki as he disembarks a plane on Sunday in Asmara, Eritrea.

As the Ethiopian Prime Minister Abiy Ahmed walked off the plane in Eritrea on Sunday, he smiled and gave a big hug to Eritrean President Isaias Afwerki.

The simple, warm gesture shocked many observers, because it happened between the leaders of two Horn of Africa countries that have been locked in a conflict for nearly two decades that has killed tens of thousands of people.

It's a sign of a dramatic, rapid thaw in tensions.

"It was the first time in some twenty years that leaders from the two countries met. Since he took office in April, Ethiopia's Abiy has made sweeping changes, including accepting the terms of a peace deal signed in the year 2000," NPR's Eyder Peralta reports.

Talks Between South Sudan Leaders Find No Appetite For Concessions

Last month, Abiy announced he would accept the peace deal, surprising many in the region. In fact, Abiy himself participated in "fighting in a town that remains contested today," according to The Associated Press.

Today's visit to Asmara saw a flood of emotion from huge crowds gathering in the streets to greet the passing convoy. Photos posted by Eritrea's information minister saw the flags of both countries lining the street as crowds smiled and waved. "History in the making: the pictures say it all," said Yemane G. Meskel.

#Eritrea, #Ethiopia History in the making: the pictures say it all pic.twitter.com/lMv8RlsYYo

"The Ethiopian delegation was greeted & received with overwhelming joy & love by the kind people of Eritrea," said Fitsum Arega, the Chief of Staff for Ethiopia's prime minister. "The yearning for peace was palpable & we'll decidedly move forward for the good of our people."

Today, he says, a direct international telephone connection was restored between the two countries for the first time in two decades.

For the first time after two decades, a direct international telephone connection between #Ethiopia and #Eritrea is restored today. #peace #Ethiopia #Eritrea.

"This is no ordinary visit. This is no ordinary diplomatic relationship. It is an emotional day," Mesfin Negash, an Ethiopian human rights analyst in Sweden, told The New York Times. "The peace process now belongs to the people. Both leaders cannot deny the public pressure anymore."

This is just one of many changes that have happened since Abiy took office, including ending a state of emergency. Eyder spelled them out last month and pointed to Abiy's unlikely political rise:

"It's worth looking back at where Ethiopia was just this March when the state of emergency was declared. The country had just been going through three years of bloody protests. People were complaining about corruption and lack of basic rights. And there was also ethnic overtones to all of this. The Oromos and the Amharas were protesting against the Tigrayans, who controlled a lot of the government. And, you know, it was so bad that when I was there, people were worried that this could devolve into a war.

"And then suddenly - and again, this was just in March - the Prime Minister Hailemariam Desalegn resigns, and the ruling party, which has been in power since 1991, when it overthrew the communist Derg regime, they get together and they do something even more dramatic. They pick a young Oromo Prime Minister Abiy Ahmed, who had basically come to represent the opposition. And in just two months, the prime minister starts to shake things up in one of the most repressive regimes in Africa."

Eritrea, which became an independent nation in 1993, is seen as particularly repressive. It requires its citizens to complete long periods of national service. Instead, thousands have fled the country, and migrants from Eritrea were one of the largest nationality groups in the recent flood of migrants into Europe.

Escape From An Eritrean Prison

"Reconciliation would deprive President Isaias of an excuse for maintaining his country in a permanent state of military readiness," Martin Plaut, a senior research fellow with the Institute of Commonwealth Studies at the University of London, told the AP.